Parade of Light 2018 is in the books!  Blake and Max had an afternoon basketball game and we left for Denver right after they were done.  Our first stop after we drop our bags is always to the Club for sodas and snacks.  After that the kids threw on their suits and headed to the pool.  Halle and Grace opted not to go to the pool this year.  I didn’t bring a suit and I was watching Luke in the hot tub.  He kept licking the railing.  I told him he’d have to get out if he did it again, but he knew I couldn’t reach him so he kept licking away.  It was hilarious. 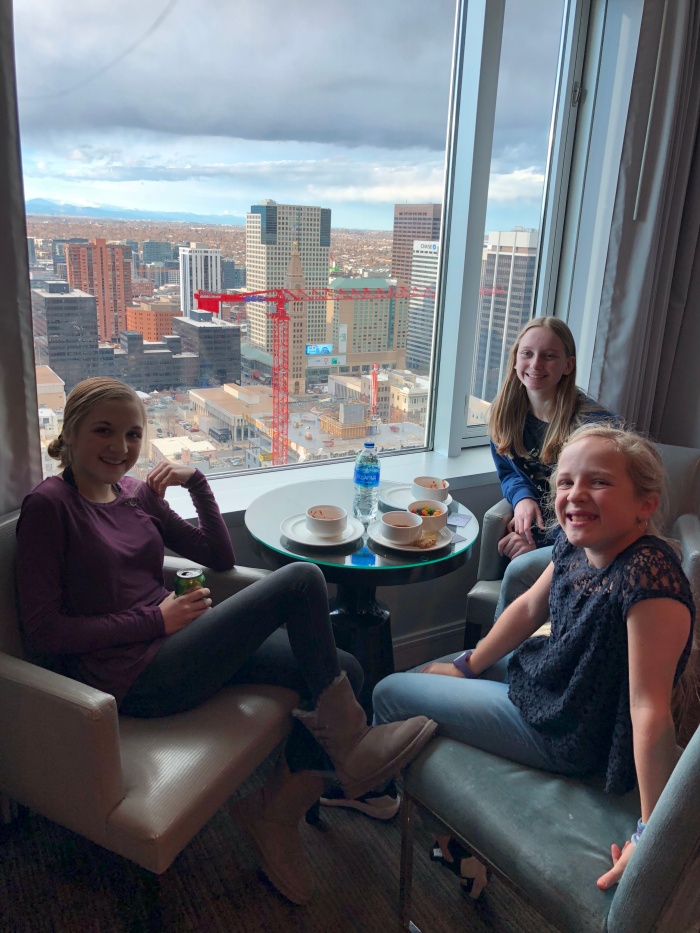 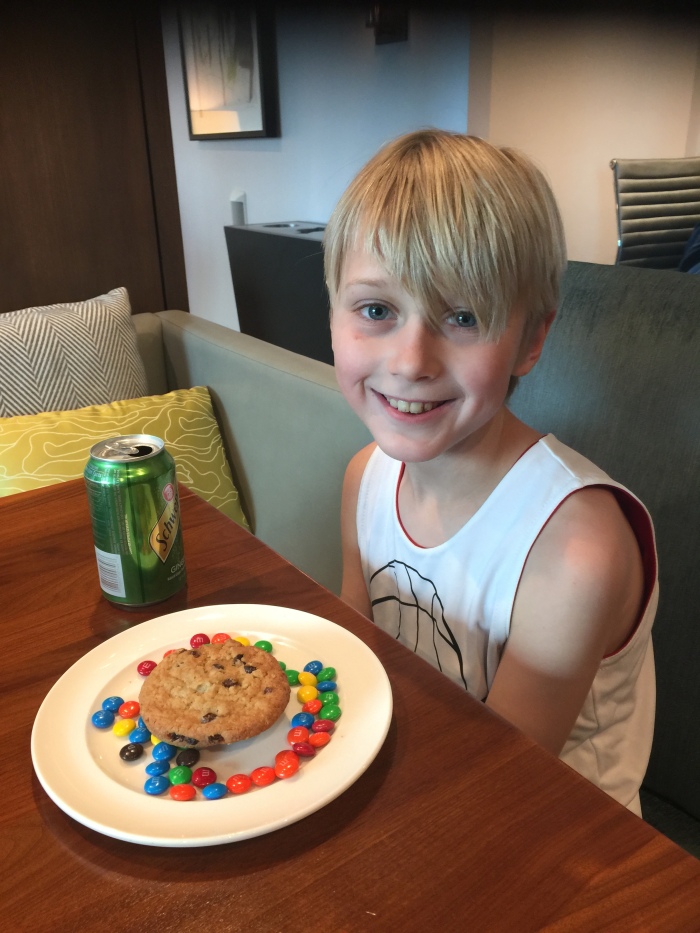 Rusty set up our parade spot earlier in the day and so we took our time at dinner and didn’t go down till a little after 6:30.  The kids all brought a hot chocolate with them, which turned out to be a major disaster.  One spilled in a chair, one spilled all over Jane and one spilled all over the sidewalk where we were sitting.  It was nuts.  We have forever banned hot chocolate from the Parade of Lights.  Blake saw this little light up dog with a Santa suit on.  He wanted it soooo bad.  He was crying and said he’d seen something like it in Paris and whenever he sees this dog he has no money.  I snuck away and bought that little pup for Christmas.  I hope he’ll be excited. 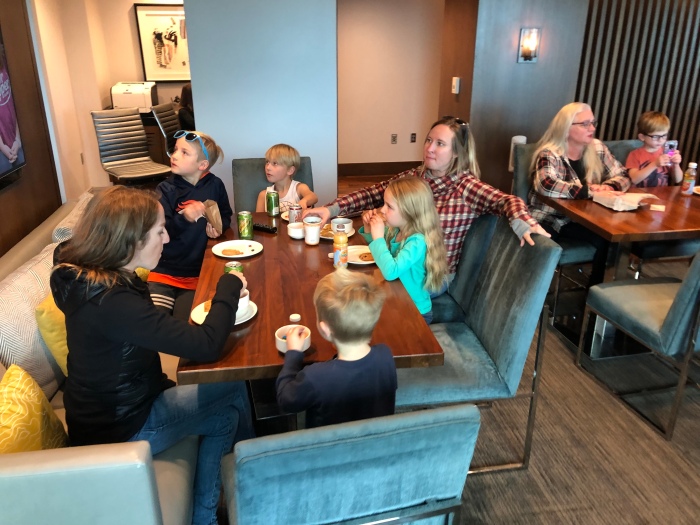 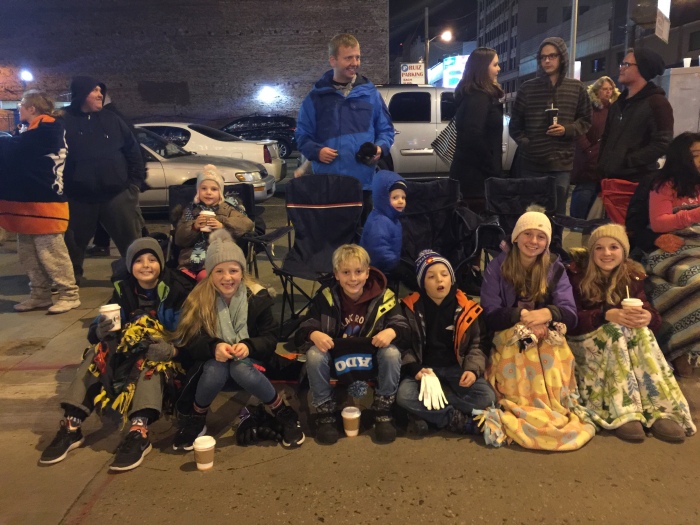 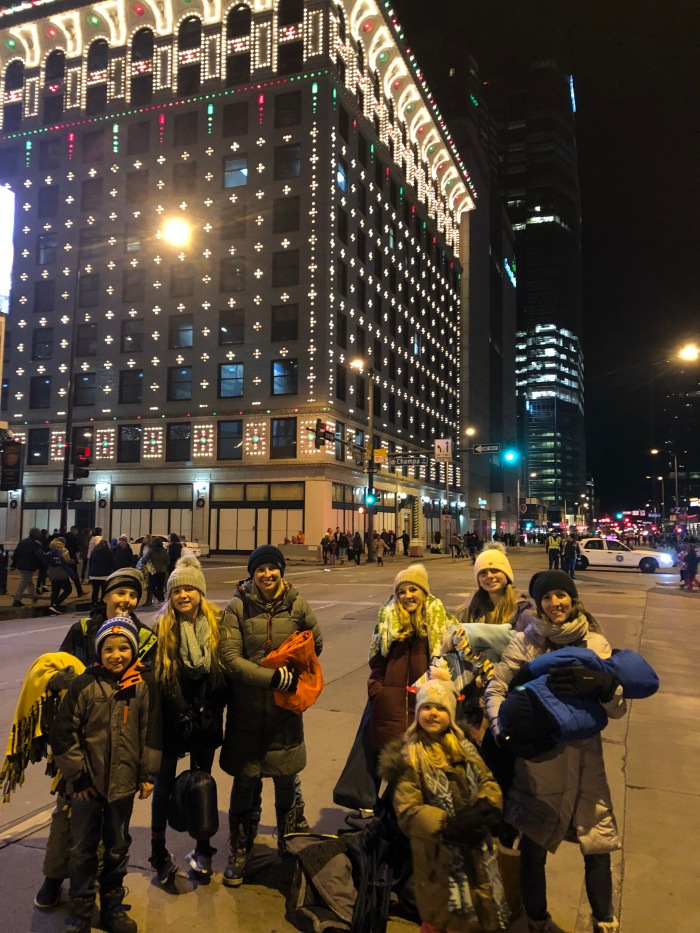 Luke fell asleep mid parade and he didn’t move for the rest of the night.  We carried him all the way back to the hotel, laid him down and kids were running around like mad.  He never moved a muscle.  Kids got ready for bed and then back the Club for dessert and some computer games.  We ended the night with everyone piled on two beds watching Arthur Christmas. 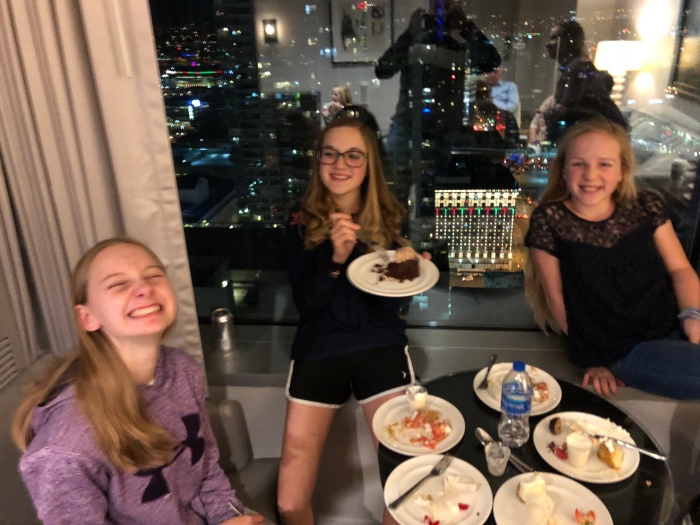 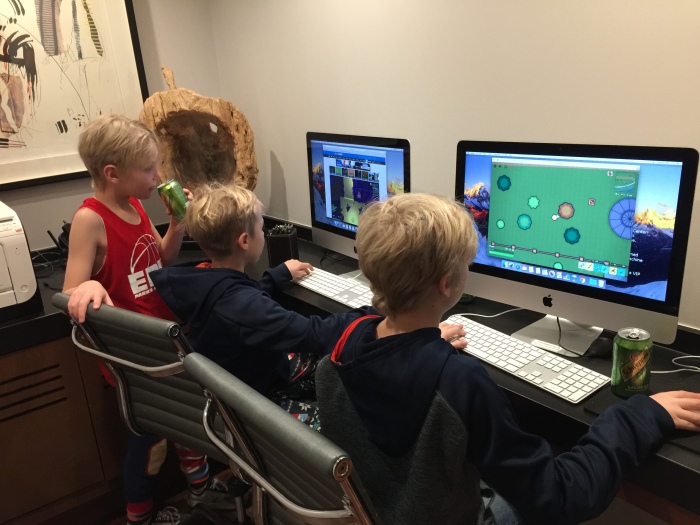 Jane and Luke were up at the crack of dawn.  Rusty says it all evens out because the kids in his room were up until super late jumping on the bed and caught in fits of giggles.

After breakfast all the kids broke off to go exploring.  Claire and Josh had fun zooming from the lobby all the way up to the 37th floor in the elevators.  Then they thought it was hilarious that they pushed every single button on the elevator.  I’m sure no one who got into that elevator shared their enthusiasm.  Rusty and I were on escalator duty with Jane and Luke.  Jane was the mom and I was the grandma.  Not sure how I feel about that. 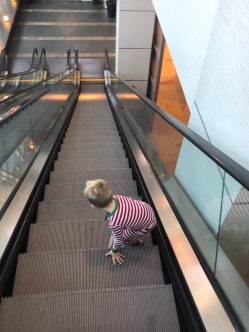 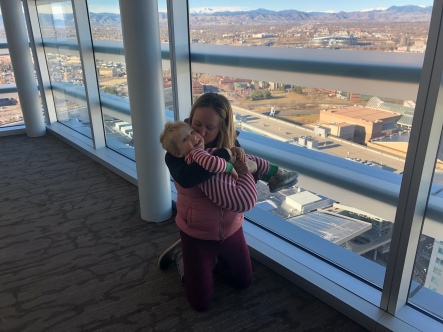 It was a mad rush to get ready for church and take our annual picture in front of the Christmas Tree. 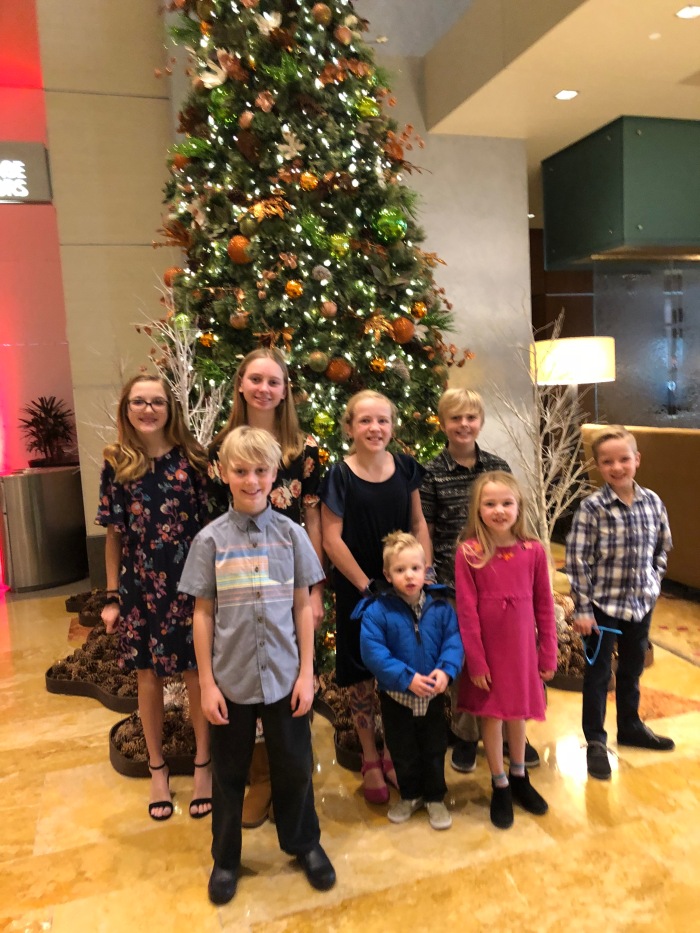 We were already running pretty late and were pulling out of the parking garage when a man asked if we could help him jump his car.  Of course, we said yes. We knew we’d probably miss the sacrament and so Josh asked if was even worth it to go to church, as we were mainly going to take the sacrament.  We told him that God honors our best effort and we’d still have a chance to feel the Spirit.  Well, wouldn’t you know, we pulled up at 10:20 and they were just starting the sacrament hymn.  We missed nothing!  It was a sweet reminder that sometimes things work in your favor, and sometimes they don’t, but that God is always there and blessings come when we try our best. 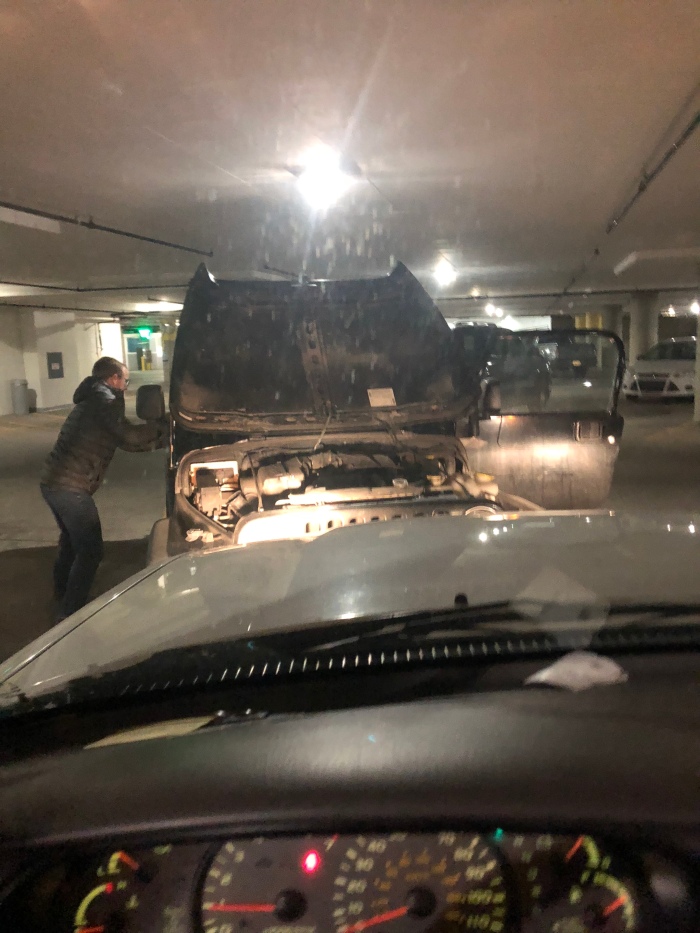 It was a great meeting.  I love the diversity in city wards.  Several people bore their testimonies who required a translator and they told beautiful stories.  One lady told of growing up in Mexico and he family having to leave the employment of an abusive employer.  They had nowhere to go and her father built a little house out of cardboard for them to spend the night.  That night it poured rain, leaving their house totally ruined and them soaking wet.  She said it was a blessing because they were all “baptized” that night by the rain.  What a sweet testimony about our attitude in hard times.  If we choose, we can see the blessing in anything. 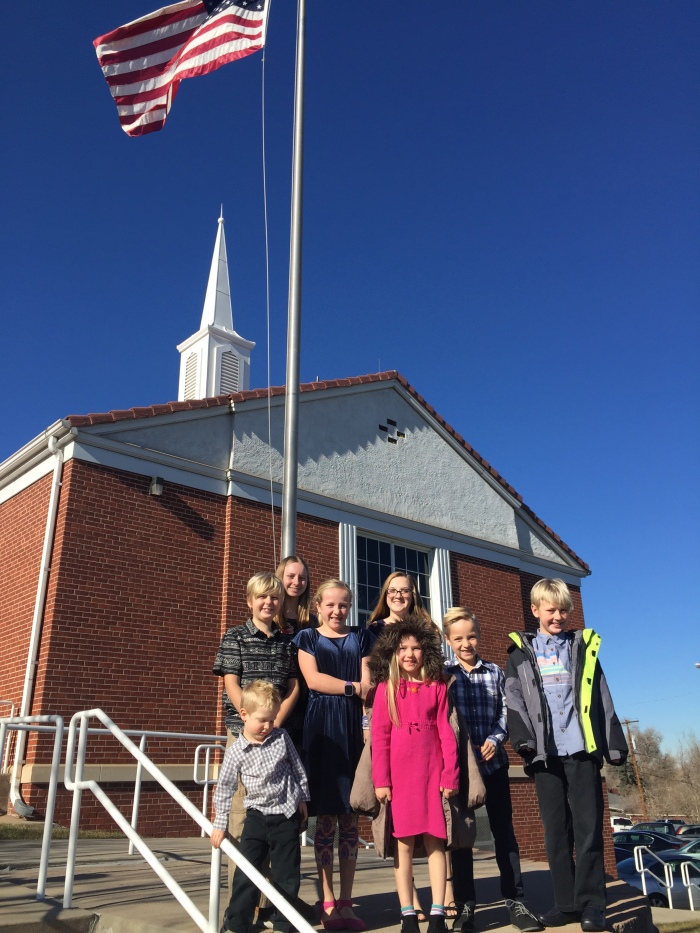 We took all the kids except Luke home with us for some basketball, ping pong, football, and watching Home Alone.  And now I’m excited for Monday–I call it Mom’s weekend 🙂 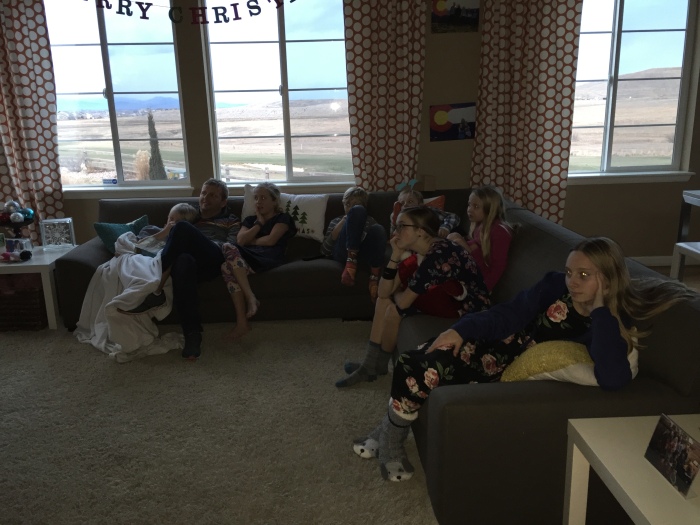