What a day this was!  We woke up about 5:30am to get a 6am start to our day.  All the adults wanted to do the hike but someone had to watch the kids so we split into 2 groups.  A morning group and an afternoon group.  The hike was 8 miles round trip and we figured we could do it in about 4 hours.  We figured wrong.  It took us just over 6 hours and the afternoon group didn’t get to go 😦

We drove about 1.5 hours to Ke’e beach up on the North Shore.  I think the drive to the North Shore is one of the prettiest in the world.  I always wish for more time up there!  We got started a bit later than anticipated and hit the trail at almost exactly 8am.  The first 1/2 mile is pretty steep, but the views from the top are worth it!  The vegetation is so green and lush and the cool ocean breeze feels amazing. 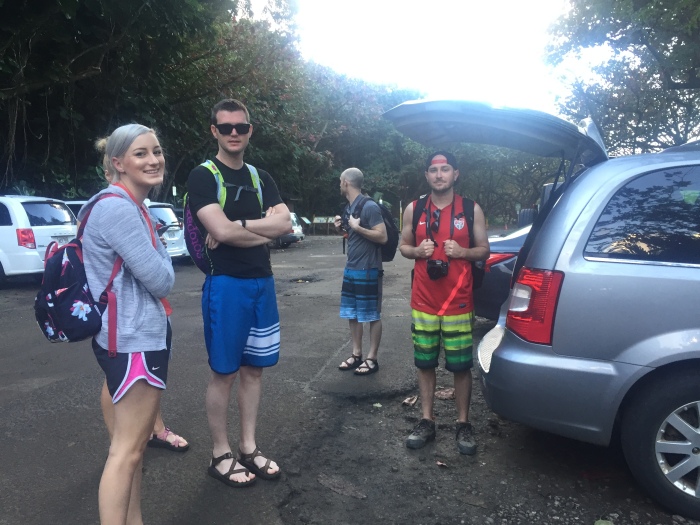 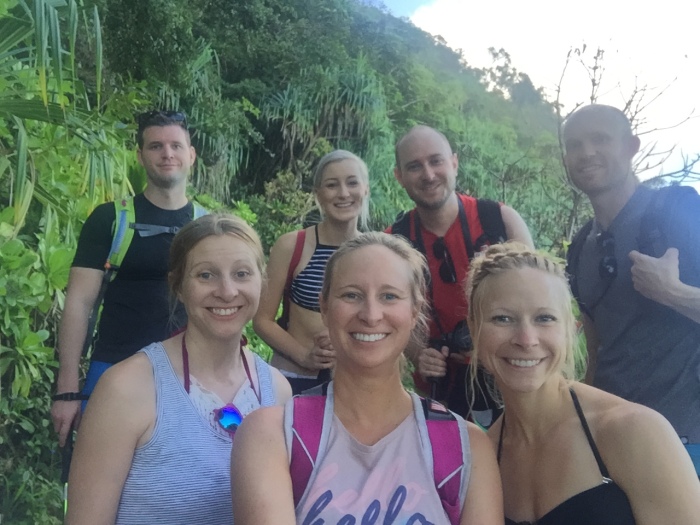 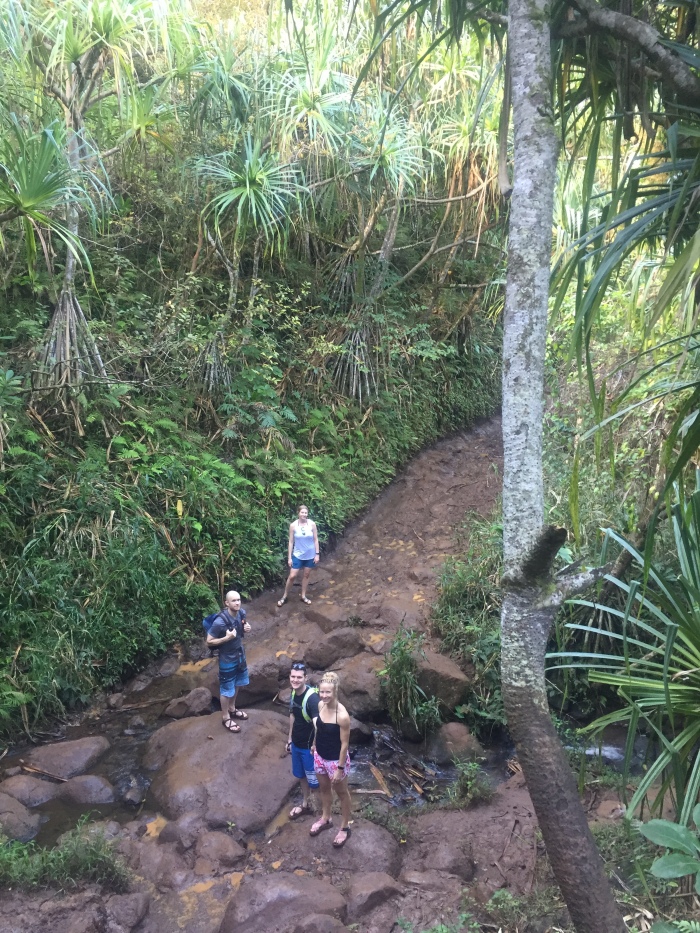 At the 2 mile mark we hit Hanakapiai Beach.  It is a beautiful beach nestled right along the Napali Coast.   There was a monk seal resting on the beach and Natalie went to take a picture.  Well, she must have gotten a little too close, because he lifted his head and barked at her!  After a little time on the beach we were ready finish the last 2 miles to the waterfall. 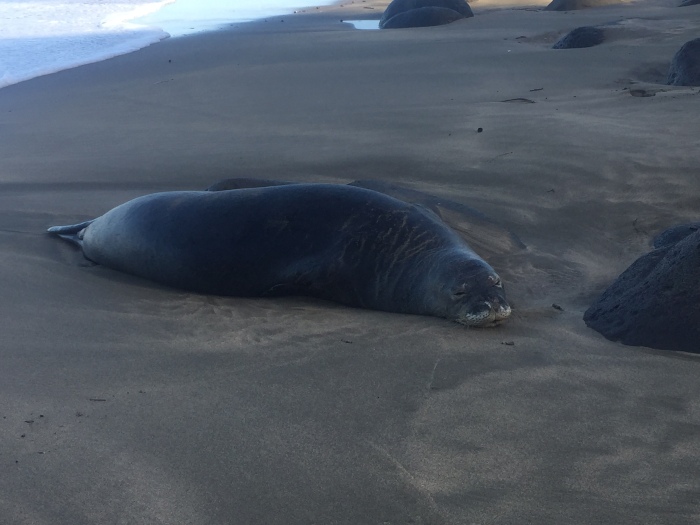 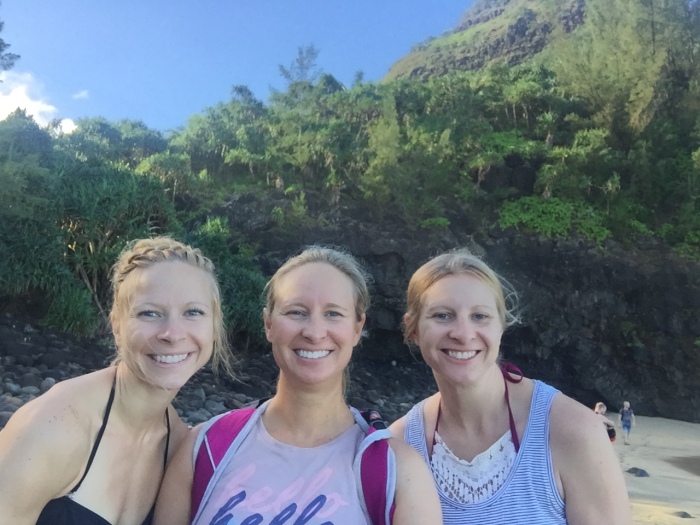 The hike was more difficult that we anticipated.  It was muddy, slippery, rocky, and had many stream crossings.  But it was totally worth it.  We walked through an amazing bamboo forest and marveled at the exquisite scenery. 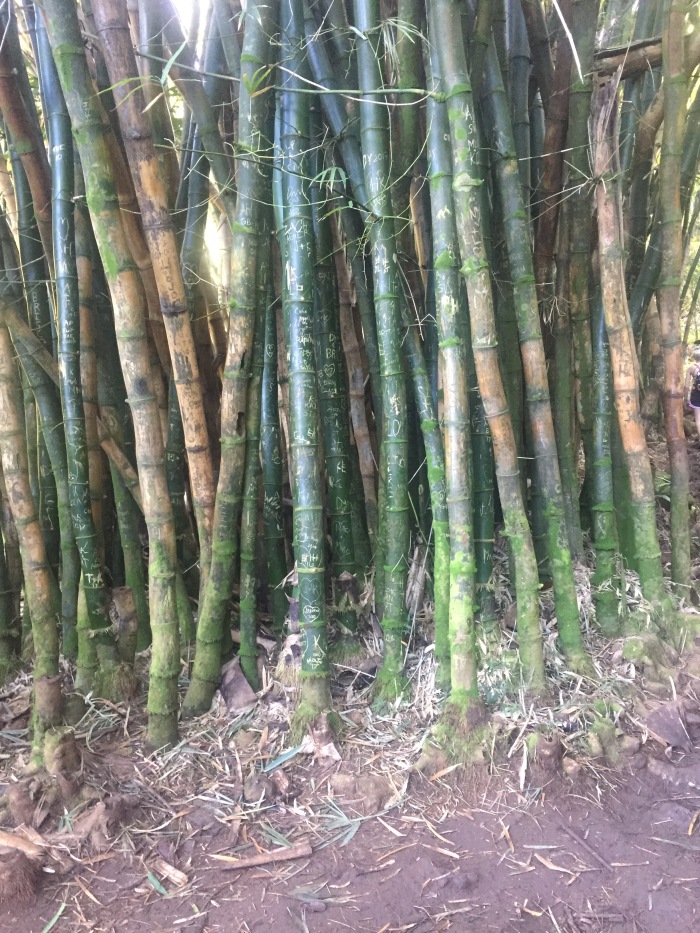 Our first view of the Falls, courtesy of Landon. From this point to the falls felt like forever! 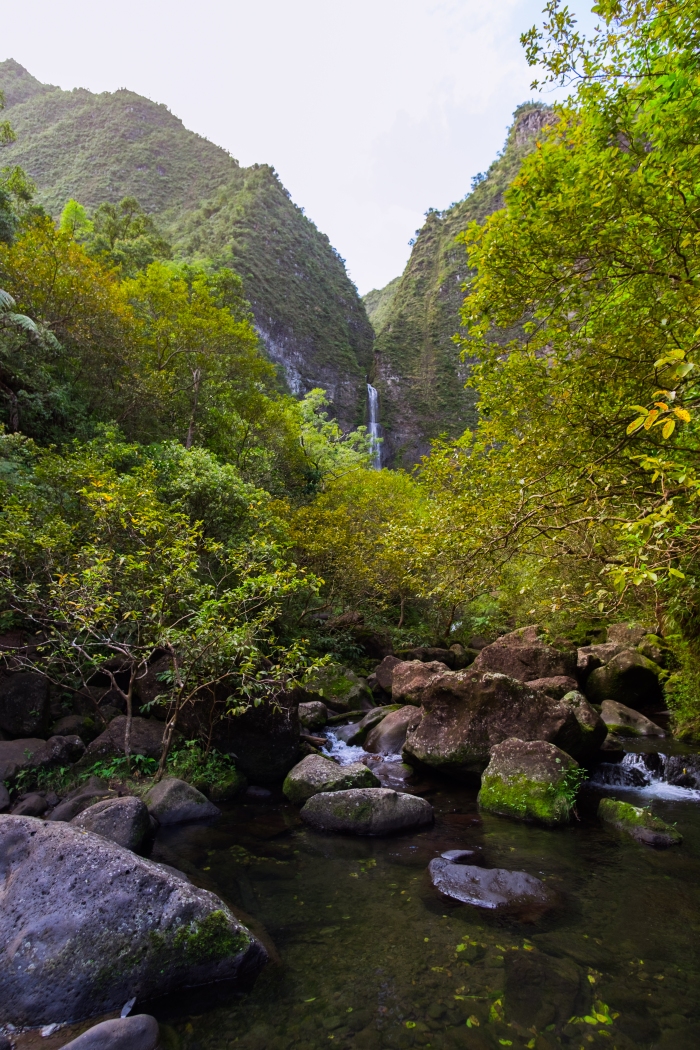 After a loooong 2 miles we made it to the Falls.  Landon and Jhena were nice enough to stay in the back with me while Danny and Michael, who I think are both part mountain goat, bounded up the trail way ahead.  I have never been a fast hiker.  And I’m ok with that. Slow and steady doesn’t break a leg 🙂 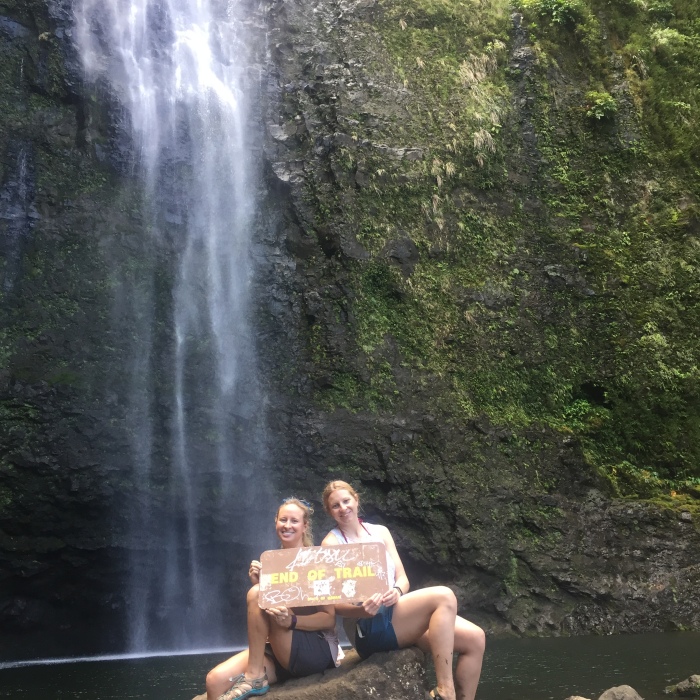 Carlie, Danny, and Michael jumped into the chilly pool below the falls.  I kinda wish I had done it too, but I was a little worried about chafing in wet clothes on the way back and the wind and overcast sky were pretty cold anyway.

After many picture attempts (Nothing does it justice) we started the hike back down. 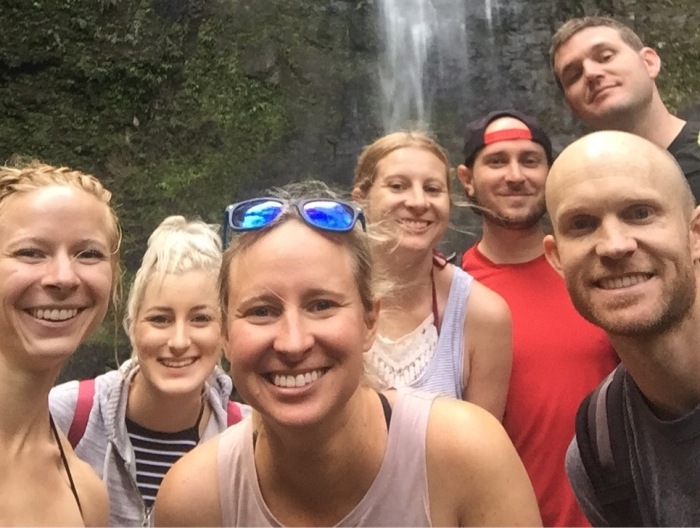 We did pretty great until about the last 1/2 mile.  And that .5 seemed as long as the 7.5 that had come before it.  It felt like we would never get to that darn parking lot!  But we did.  Hallelujah!  I’m so glad we did this.  I felt strong and brave and proud of myself.

Dan and Car had finished a good 20-30 minutes before the rest of us so Dan decided he’d just walk to Tunnels Beach.  I think he ended up hitchhiking, but either way he beat us there.  The rest of us eventually made it in our mini van.  The rest of the adults were a bit worried because we had no cell service and were way longer than we said we’d be. 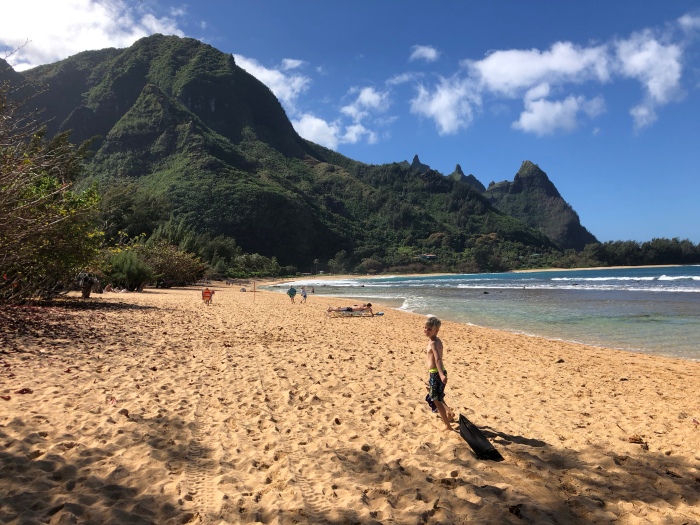 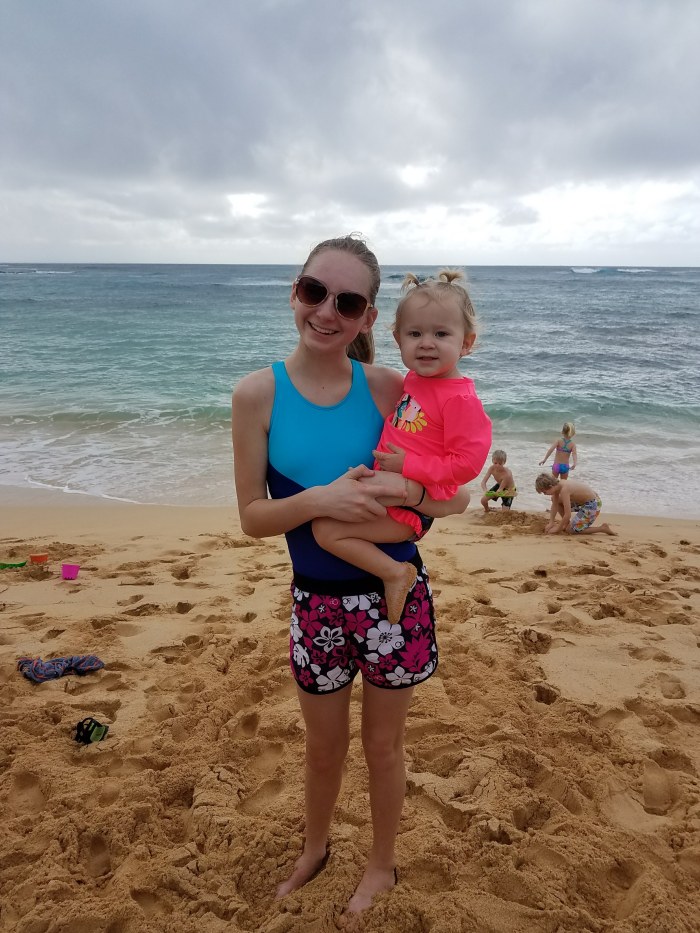 Tunnels Beach was our very favorite beach on our last trip.  The scenery still can’t be beat but the waves on the North Shore are really big in the winter and there was a rip current so the kids couldn’t get in the water for several hours.  This did not go over well with them.  But finally as the tide went out, it was safe for them to play.  And play they did.  I still can’t get over how much they love the beach.  My children, who whine and complain every time we want them to go outside at home, played happily on the beach for hours and hours.  It was magical! 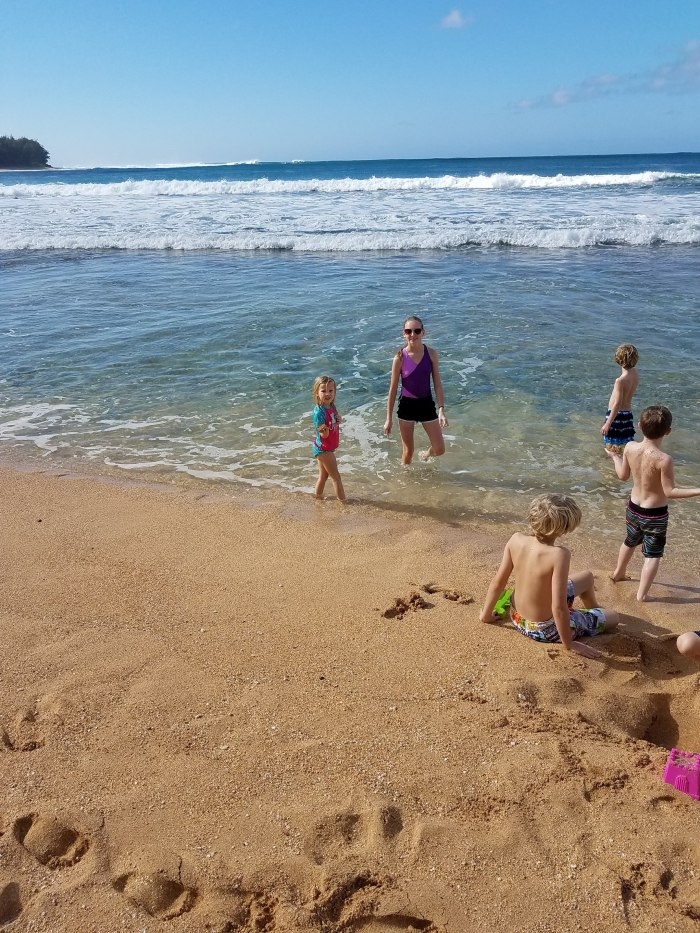 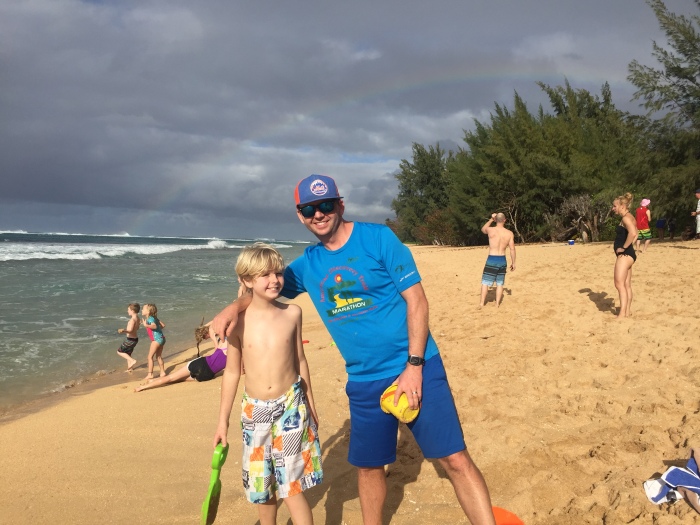 When we were done at the beach we started the long trek home. Cole rode with us and we stopped at the Jo Jo’s in Hanalei for some more shave ice.  I tried the Colada Special this time.  It was good, but not as good as Berry Berry.  We also got a Spam Musubi from L&L to introduce the kids to some local Hawaiian food.  It is so bad for you, but so delicious.

Today was also Jack’s birthday!  Pretty great to get to spend your birthday on Kauai.  His birthday wish was to get Pina Colada’s by the pool.  So, that’s exactly what we did.  He said, “You haven’t truly lived until you’ve had a Pina Colada.”  We grilled burgers by the pool, drank our Pina Coladas and ate Costco chocolate cake.  Who could ask for more? Also, as we sang Happy Birthday to Jack he arm pit farted along to the entire song.  That kid is so funny!