For our yearly winter get away, we decided to hit up Phoenix again.  It’s cheap and easy to get to and we always have a great time.  We decided to switch things up a bit and get a check on the bucket list by hitting the Grand Canyon for a day.  And, wow!  We are so glad we did.  Winter was an amazing time to go.  No crowds, no lines–it was so fun.  We also visited during the stupid government shutdown, so our admission was free!  Thanks to the state of AZ for keeping the park open.  We parked near the visitor center and started our journey along the Rim Trail.

Every time the kids would get anywhere near a ledge, Rusty would about have a heart attack.  The kids were mocking him a little bit and he said, “If you fell, you would only be sad for about 60 seconds.  Then you’d be dead. But I’d have to be sad for like 50 more years. And that’s not fair to me!”  They all thought this was pretty darn funny and Josh said he’d be telling his own kids that story when he brought them to the Grand Canyon someday. 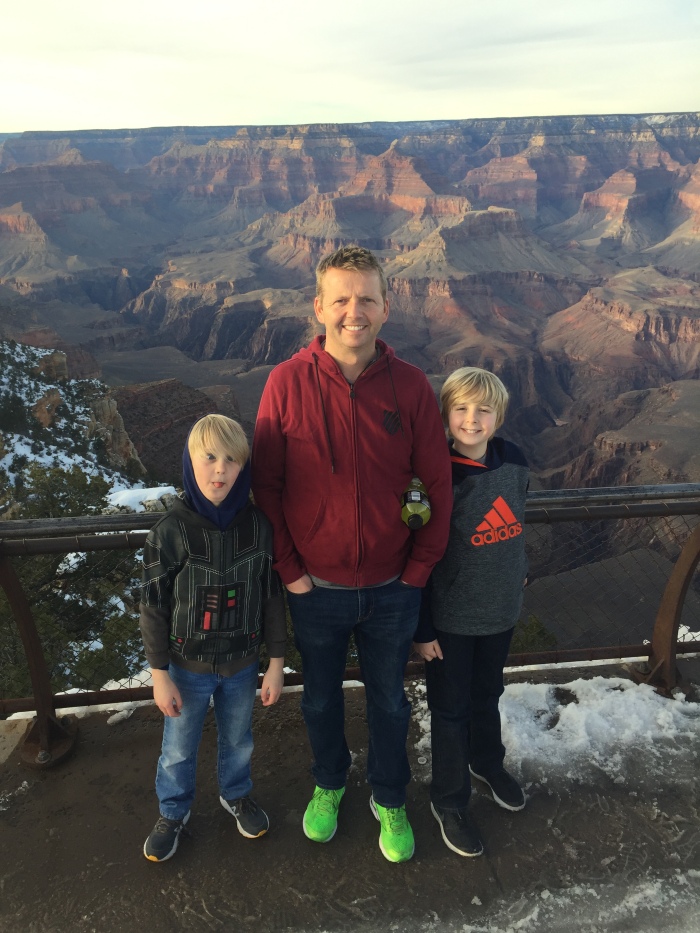 We weren’t too far in, when Blake lost his tooth!  There was a big debate over if he should keep it, or chuck it over the ledge into the Grand Canyon.  He kept it. 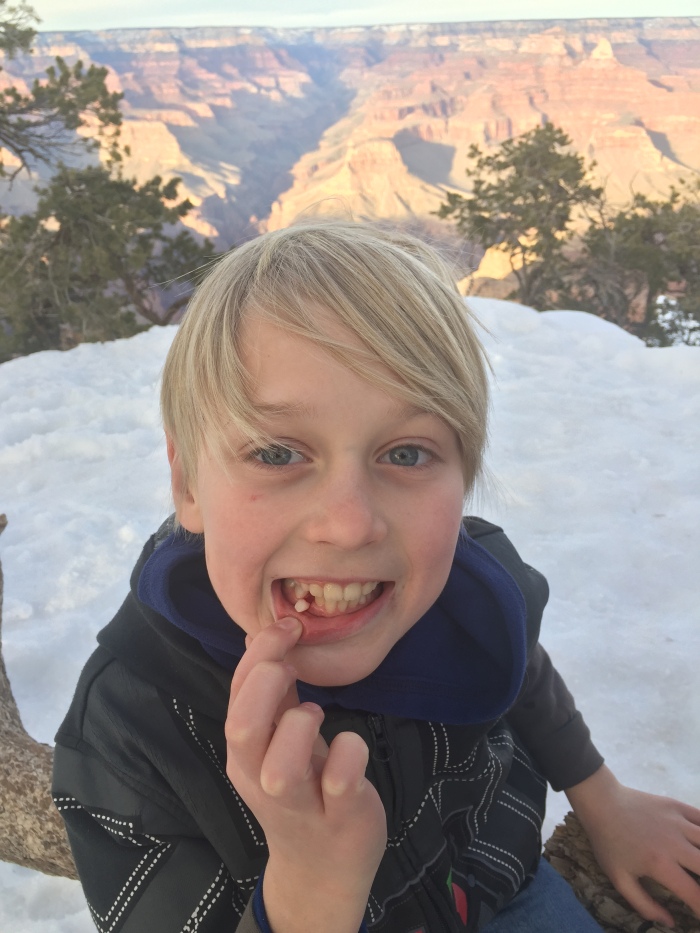 There was a full moon the day we were there.  It was so pretty to see the bright moon and the soft colors of the canyon at Dusk. 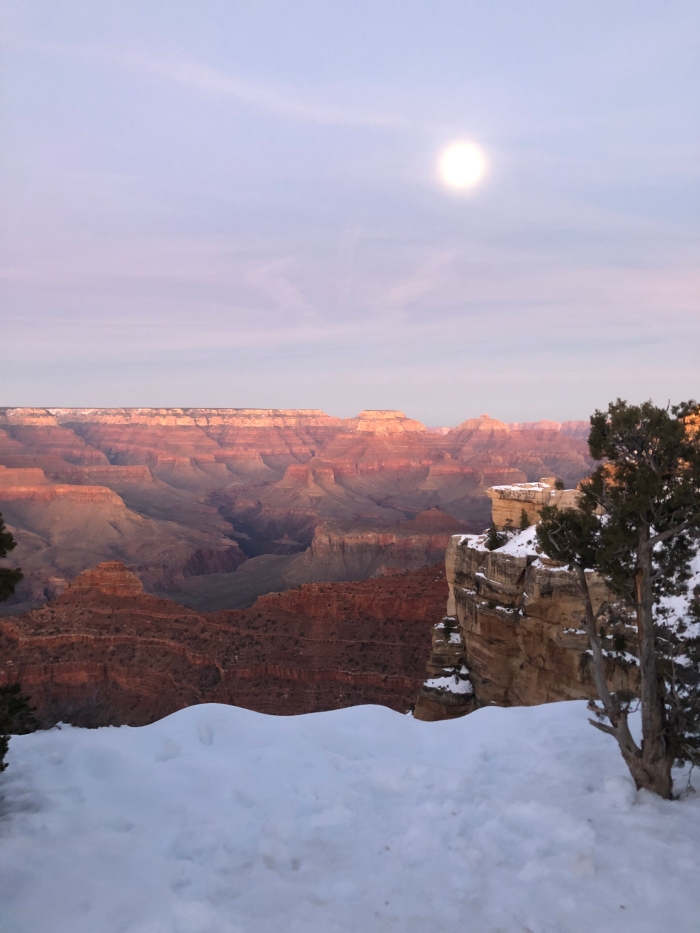 We had pizza for dinner and stayed at the Grand Hotel, where Josh proclaimed himself the Bubble King of the hot tub.

Me and my adventure buddy decided to get up early the next morning, drive into the Grand Canyon and watch the sunrise. We walked to Mather Point and secured a spot.  It was so beautiful and totally worth getting up for. One guy didn’t agree.  Everyone was focused on the sunrise coming over the top of the canyon and he said, “Hello people!  You can see a sunrise ANYWHERE.  Look at the GIANT HOLE in the ground!!”  We all got a good chuckle.  Pictures don’t begin to do it justice, but I’ll include them just the same.  The colors were soft and fuzzy and such a beautiful contrast to the blues and purples of the dark canyon. 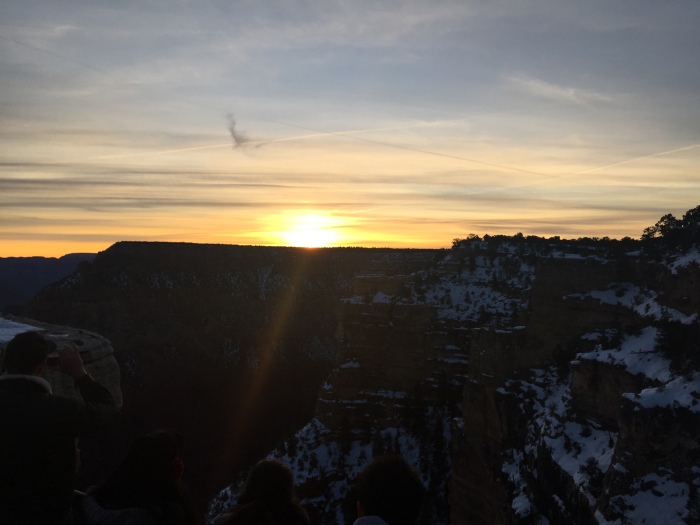 After the sun was fully up and we were fully frozen we went back to the hotel for breakfast.  We got all packed up and checked out and headed back into the canyon to do Hermit Road.  In the summer this is a shuttle route only but in winter you can drive the whole thing.  It was so nice to just be on our own timetable.  One of the kids favorite things about this trip is that we rented a minivan.  We usually just do a 5 seater car, but we scored a deal and the kids were THRILLED to have space to stretch out and not be touching each other.  I was surprised at what a big difference it made.  My favorite lookout point was the first one we stopped at today.  It was called Trailview Overlook.  Stunning. 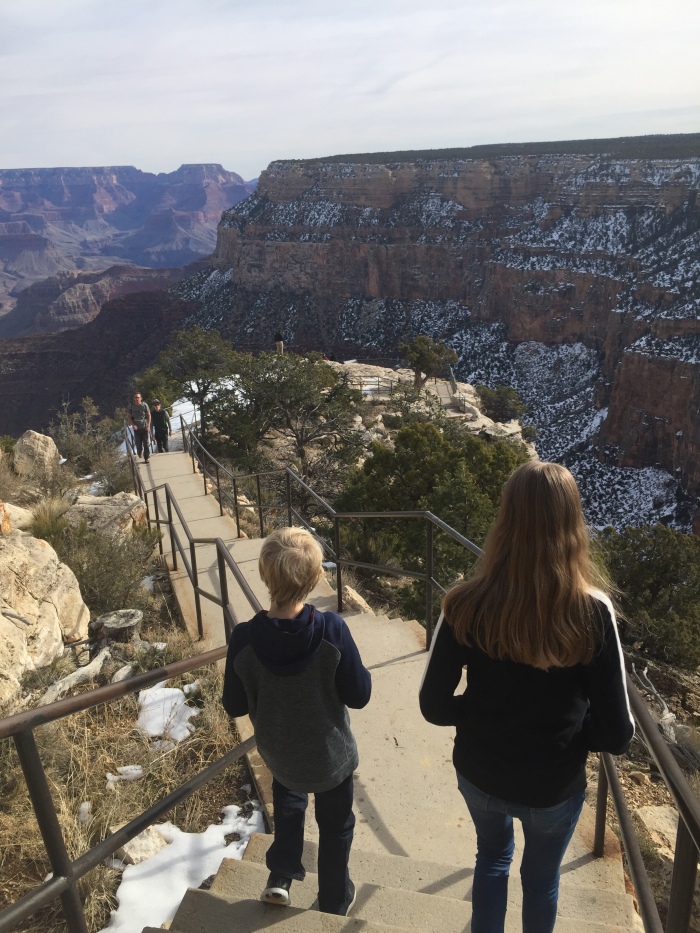 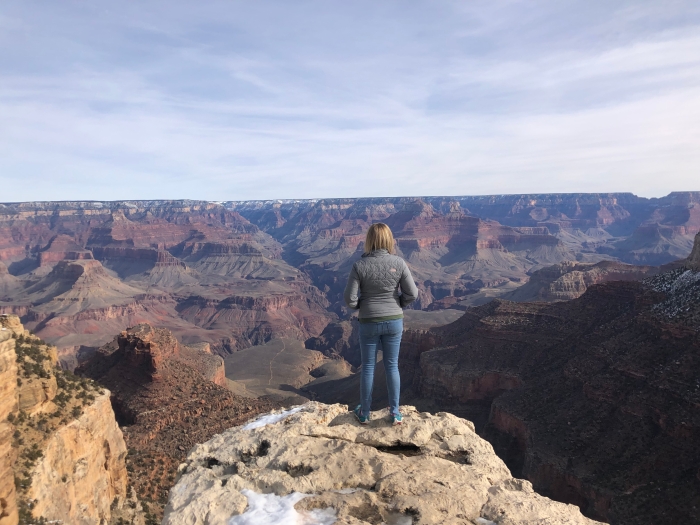 The boys and Rusty engaged in snowball warfare all day long.  It’s hard to say who won–there were lots of good shots on all sides.

And our only family pic at the Grand Canyon was a selfie at Pima Point.

We ate our traditional traveling meal of turkey on a roll and chips and fruit at Hermit’s lookout.  Then we made our way back to the Bright Angel Trail in hopes of doing a little hike.

But, the trail was snowpacked and icy.  We didn’t make it too far before we decided to turn around.  Rusty wanted to venture on a little further, so the kids and I went souvenir shopping while he hiked.

We texted Grandma Cornell from the Bright Angel Lodge, where she worked a few summers in college as a switchboard operator.  She told the kids a funny story about how one time she had to call security on a man running through the parking lot in nothing but a blue hat.  They got a good kick out of that. 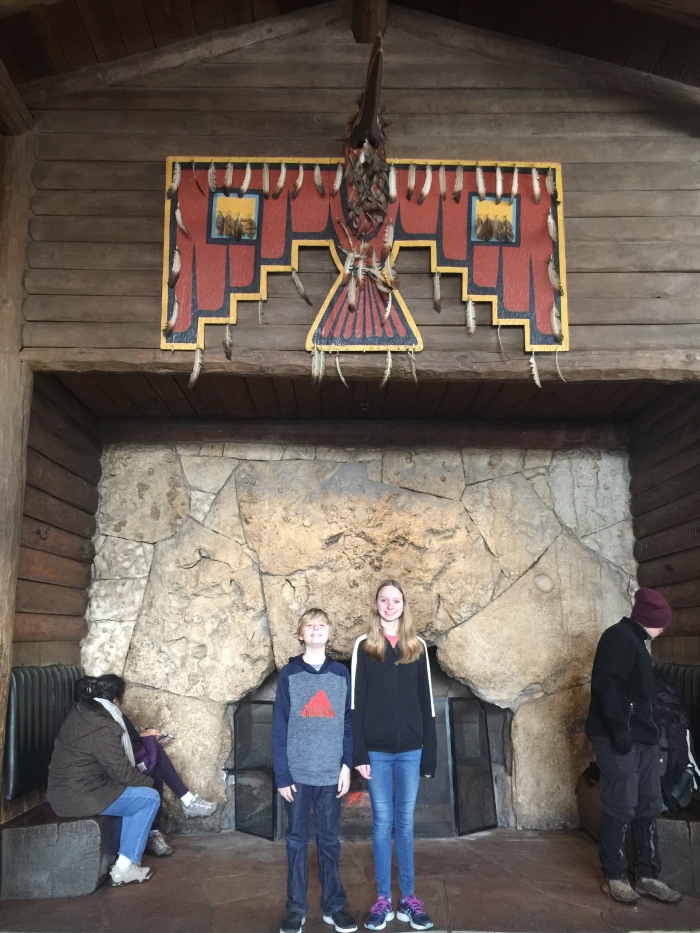 Thanks, Grand Canyon, for a lovely visit!  Now we’re off to Phoenix!  Halle said our resort, the Wigwam, was giving her serious Hawaii vibes.  It had perfectly manicured lawns and tons of palm trees.  Our room was just steps from the pool, and we enjoyed a little night time dip and sitting in the hot tub.  We had the entire place to ourselves.  So fun.  Then we all snuggled up at watched America’s Got Talent.  During the commercial breaks we went to check on the progress of the lunar eclipse.  It was fun to see, but Blake was disappointed that the clouds really obscured the red of what was supposed to be a blood moon.

The next morning Rusty and I jumped on the complimentary cruiser bikes and peddled around the surrounding area. AZ is so uniquely beautiful with its cactus, palm trees, and orange trees.  The coolest thing we saw was someone harvesting the oranges in their yard. I’ve never seen so many oranges at one time!

We played some tennis, where Josh and I FINALLY unseated Rusty as the doubles champ.  We were so proud of ourselves!  The rest of the day was spent soaking up the sun by the pool.  We swam, ordered food, read, ate treats, took naps, and had a lovely day.  On the way back from the pool the kids picked lemons and then made lemonade with the sugar packets in the hotel room. 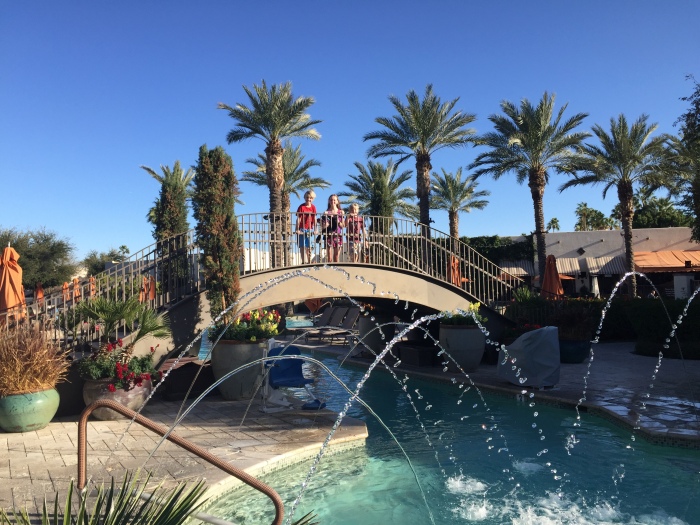 In the evening, Jeff, Carolyn and Fam came to visit with us.  We ordered pizzas and salads and once again had the pool to ourselves!  This was a highlight of the trip of EVERYONE.  The kids got along great and we loved catching up with Jeff and Carolyn.  The kids loved hearing funny stories from when Jeff and Rusty were growing up, and we all reminisced about our newly wed days at Utah State living in the Yorkshire Townhomes.  The night flew by way too quickly.  We are so glad they’d take time out of their busy lives to come see us.

The next morning we went across the street for a yummy breakfast.  When we left, we went out the back door and locked it.  When we returned, we realized we had never unbolted the front door.  We were stuck!  No way to get into our room!  We tried to shimmy the lock with sticks and credit cards, but no luck.  We had to call security to come and let us in once again through the back door.  It was pretty funny.  In no time at all we were back and the airport and on our way home to the cold and snow.  We needed one more day of sunshine!