After our long day out in the sun the kids were begging for some down time.  Rusty and I left them at the apartment to rest and relax and he and I hopped on a tube to Camden Market for a morning date.

Rusty didn’t go with us last time so he was excited to try all the deliciousness.  I was also pretty darn tired, so I took no pics.  But we tried corn pancakes filled with pork belly that was so so good.  And then we had some really incredible grilled chicken over greens.  I wish I remembered the name of the stands.  For dessert it was more dutch pancakes.  But they gave Rusty a pretty nasty stomach ache.

Later in the evening we had the Sister Missionaries over for dinner.  One was from Utah and one was from Malaysia.  It was fun learning about life as a London missionary. 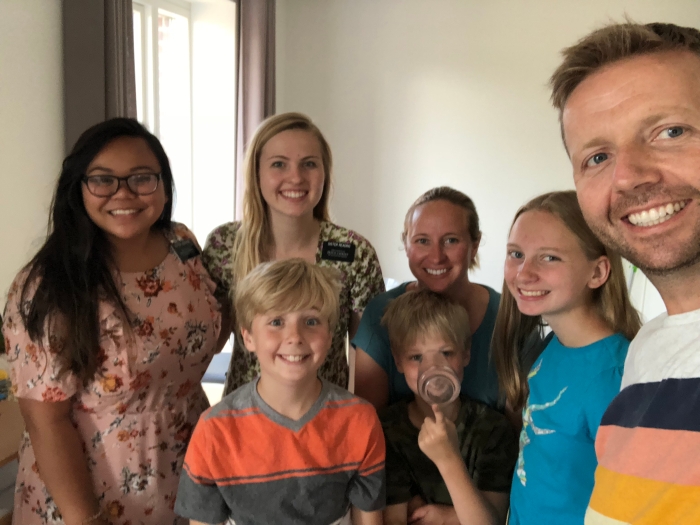 The kids were in rare form.  Showing off, acting silly, and just acting like brats.  After the Sisters left we sent them outside to play at the park because we needed a BREAK. When they got back we asked them if they wanted to go to the store to get treats for Wimbledon because we still weren’t ready to parent.  Blake said, “wait….there are no consequences for the way we acted? I said, “well, we are pretty disappointed in that behavior.” He ran down the hall and we heard him say, “Guys! We have no consequences! They are only disappointed in us! And we get to go get a treat!”
Sooo….Parenting fail?

England was playing the in the World Cup round of 16 (I think). The match went into over time, then into a shootout.  England won with the last kick and the city went BEZERK.  We could hear car horns, cheering and shouting.  It was so much fun!  Halle, who was sleeping with the windows open, said she caught snippets of celebrations late into the night.