Tara and I went to Wimbledon in 2013, the year Andy Murray won it all for Britain. This year we decided to take the whole family. Josh has been talking about this ever since the French Open. Blake and Halle were indifferent.

The day started early, out the door at 7AM, a short bus ride and we were in “The Queue” by about 7:20. We picked up our Queue card, #6040, a full 700 slots earlier than last time! Nice work team. The queue was actually fun (Tara says it’s a Wimbledon Tradition!). And….there was no line at the women’s bathroom but there was one at the men’s. Wonders never cease. 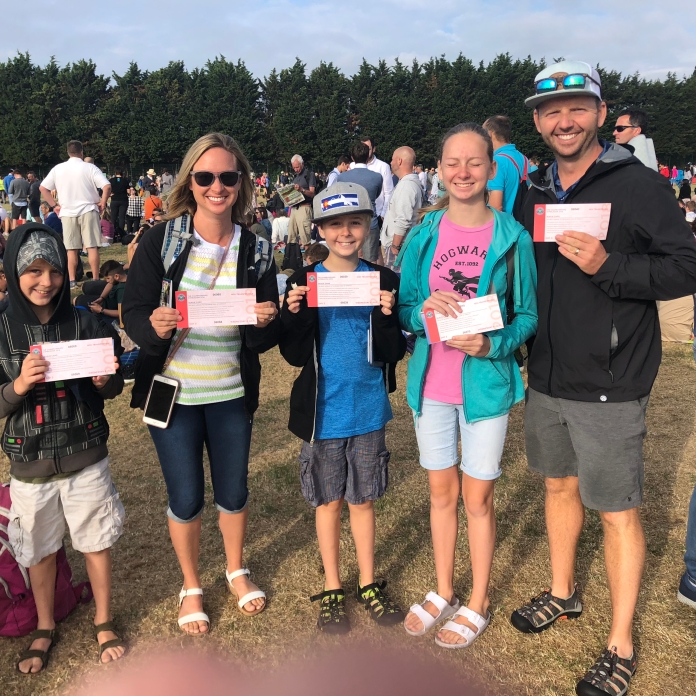 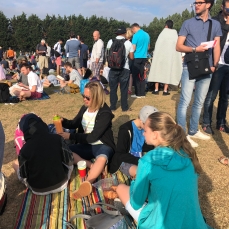 We ate breakfast, walked around, played some dirt tennis, pet some greyhounds, and fed some ducks. (Halle was reunited with her swan friend “Larry”). Everyone is so nice and eager to chat. Before we knew it, it was time to start moving. Now this part did take a long time to get to the security check. But we went past some Robinsons drink samples. It was delicious! We found some concentrate later in the day and filled our whole giant water bottle full. There was a tennis court where you could play a massive game of Around The World. Josh was bummed that this round was only for adults. 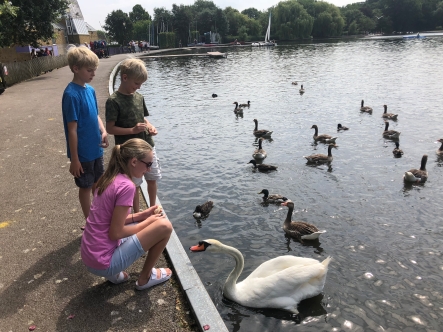 Finally about 1230 we were in! We rushed to Court 12 to try and catch Madison Keys, but she was already done. So we saw Sam Query win his match. We checked out the interactive exhibits. At first Josh didn’t want to go, he only wanted to watch matches! But then we turned the corner and a nice girl asked “Do you guys want to come play?” and Josh gave an enthusiastic YES! Then we watched two sets of Isner. We thought it was over so we moved on.

Josh was loving it. Tara Blake and Halle spent most of the time reading 🙂

Then we had the invasion of the flying ants!  They were swarming the players. Wozniacki blamed some of her loss on the ants.

Zoologists say this happens once a year, usually after the tournament but it has been so warm it came earlier.  I admit they were annoying. But Blake was dying! Like lose his Shiz, freaking out. We walked up to Henman Hill (Murray Mound) and covered Blake in the blanket. But then Josh started having an allergic reaction where his throat got really itchy. He’s had a few hives here in England, but this was the worst by far. We made sure to find out where the first aid tent was in case things turned for the worse.And everyone was hungry! And there were still ants everywhere! This was the hardest part of the day. 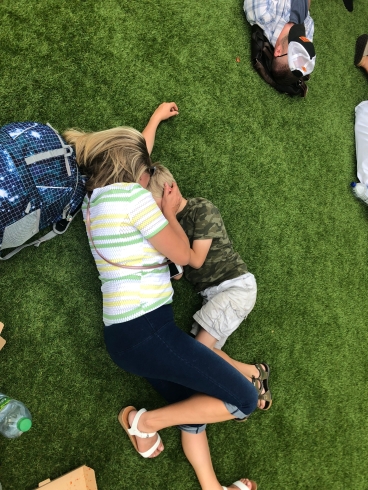 Luckily the ants stopped, clouds moved in, and even a rain drop or two fell cooling things down. We took some pictures, ate some lunch of pizza and strawberries and cream (we had brought sandwhiches, but they were gross, they sat too long! Almost ruined us of our love of salami sandwhiches) and Josh’s allergic reaction subsided. We were back in action. 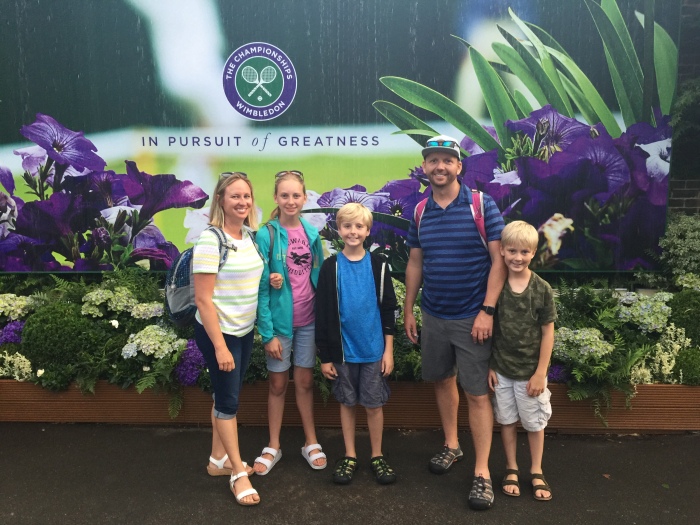 We went to Court 18 which is a neat sunken court and watched Jared Donaldson play Tsitsipas which was a great intense and close match. This was the best match of the day. We were loving it, but they kept calling medical timeouts and then it started to rain and they called the match. It looked like it was going to clear and Isner was still playing so we ran over there. They were just about to come back on court when it rained again!! It just about cleared up, and then it started raining again! And that was it. They called play. Our Wimbledon day was over. We mourned and ate some crisps and went souvenir shopping. Josh picked out a special Wimbledon visor that he can wear when he plays tennis. Tara got a cute little bear for the Christmas tree. Then the bus home. 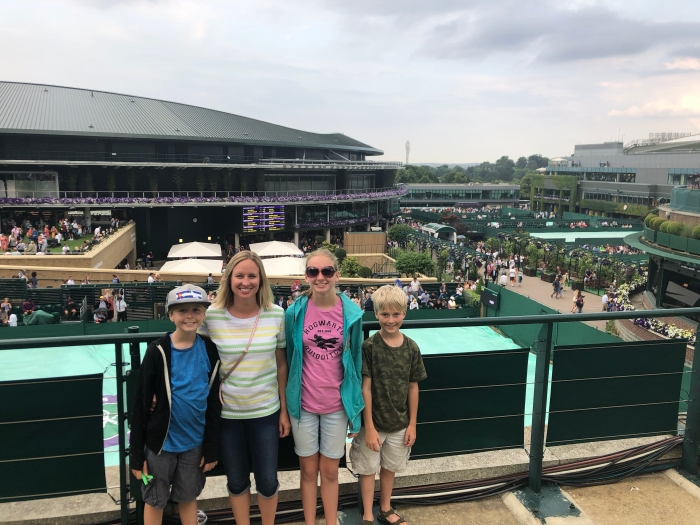 It wasn’t a perfect Wimbledon day, but as Josh and I talked about later, even the worst day watching professional tennis beats most normal days doing something else.

Notes for next time: I think I would go to Round 1 instead of Round 2. There were lines to get into the courts which made it hard to “court hop” to the best matches, which is our favorite thing to do. You kind of had to pick a court and camp out. There should be twice as many matches going on in Round 1, so the lines should be shorter?

For tickets: If you know you are going the December prior, you can put in for the Ballet. You have to write by snail mail! I still would do the Ticket Master thing and try to get tickets. That way you can go right in. They go on sail at 1PM for the next two days. So if you want tickets for Wednesday you go online Monday right at 1PM. It would be nice to have tickets to the show courts, but you never know what court! For example, today I would have rather had tickets to Court 1 with Venus and Wozniacki and Cilic than Centre court.

On The Fourth of July we got up super early in order to go to Wimbledon because you need to wait in a super long line to get tickets. We got up and got ready super fast even though we were really tired and went to catch a bus. When we got there we fallowed the signs to the place where the line was. It was super packed! They had us sit in rows of people. We got a queue card that told us where our spot was. Then we spread the blanket out and ate breakfast. After that we played screens for a while before going to check out a place with mini tennis courts you could play on. After that we played more screens. When they finally had us  move we still had to wait for a hour when we FINALLY got tickets the first match we saw was Sam Qurrey because he is an American tennis player. After that we went to a fun kids sone where you could see how fast your serve is, how fast you can react, and a mini tennis court you could play on. My favorite part of that place was the Nintendo Switch with the new Mario tennis game. After that we went and filled our water bottles with water and Robinson’s fruit concentrate which was very good. Then we went back to the same court Sam Qurrey played on to watch John Isner. It was really cool to see the best American play especially because I saw him play in the French Open. After a few sets of that match we went away to Henman hill because there were a ton of these flying ants flying around and bugging us. It didn’t get much better on Henman hill though, I started having some sort of allergic reaction to something in the air. The tennis players also hated the bugs. We went away from Henman hill to see if we could find some food. We got strawberry’s and creme, a classic Wimbledon treat, and spaghetti sauce pizza, witch turned out to be really good. After that we saw another American guy play. This match was really good and the players were very evenly matched. And then it started RAINING. All the matches were paused and we got to watch people pull the tarp over the court. We went to the gift shop to see if there was anything we wanted but everyone else had that idea too so we left and went to a cafe. I got some potato crisps. After that we saw that all the matches had been moved to the next day because of the rain!😡😡😡😤😤😖😫 So we went to the gift shop again and I got a Wimbledon visor. Then we left, caught a bus home, and went to bed fast because it was 10:00.