We took a train from Kings Cross to Cambridge. We love the trains! We especially love when we get the seats with a table so the kids can work on their puzzles.It was lunch time when we got there but we didn’t want to deal with finding food so we just grabbed some stuff at the train station and ate it on a bench outside. 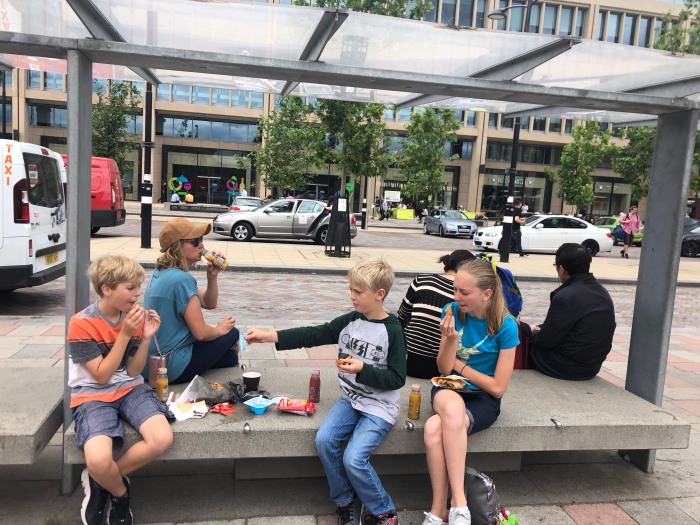 Our first stop was the Botanic Gardens. I give them a “meh.” Blake loved that there was lots of space to run around and he even convinced Rusty to play a little game of capture the flag. Halle, Josh and I were still feeling pretty tired, so we hung out under some trees. 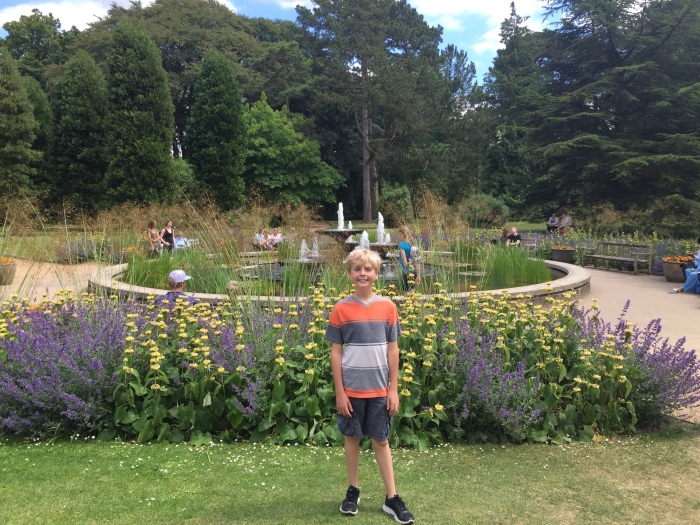 Now on to Cambridge University! Rusty and I had both just finished reading, “Educated” a memoir about a girl who grew up in an extremist Mormon family in Idaho. Her father didn’t believe in public schools or doctors and so Tara had no exposure to a formal education until she took the ACT when she was 17. She escaped her home, went to BYU and then on the earn a PhD from Cambridge. It was a fascinating story, and just having those ideas fresh in my mind made it even more fun to see the University.

We made our way to Kings College Chapel. This chapel is exquisite. It took something like 100 years to finish. 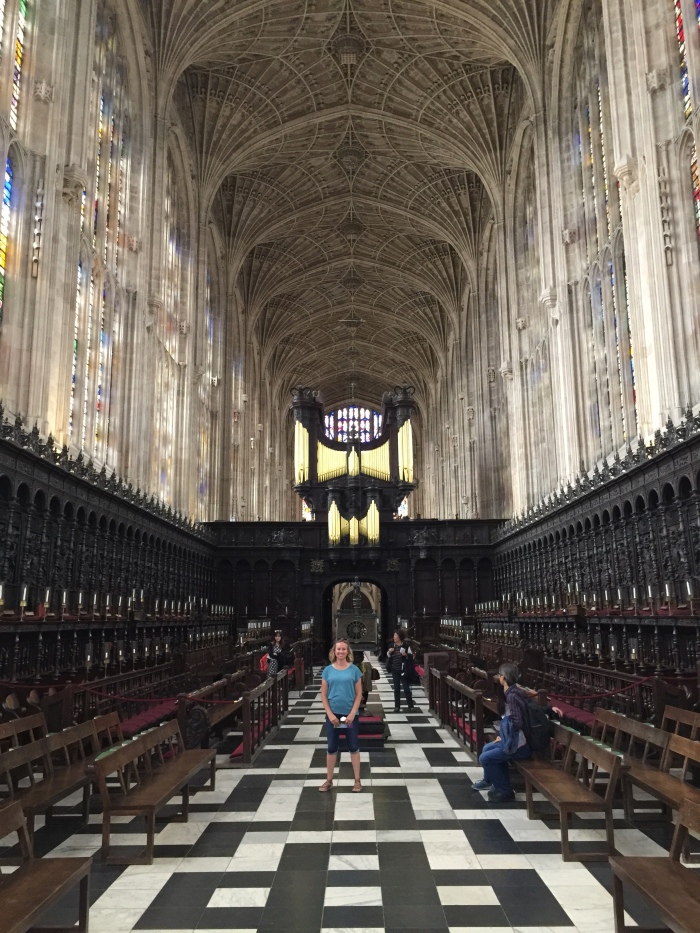 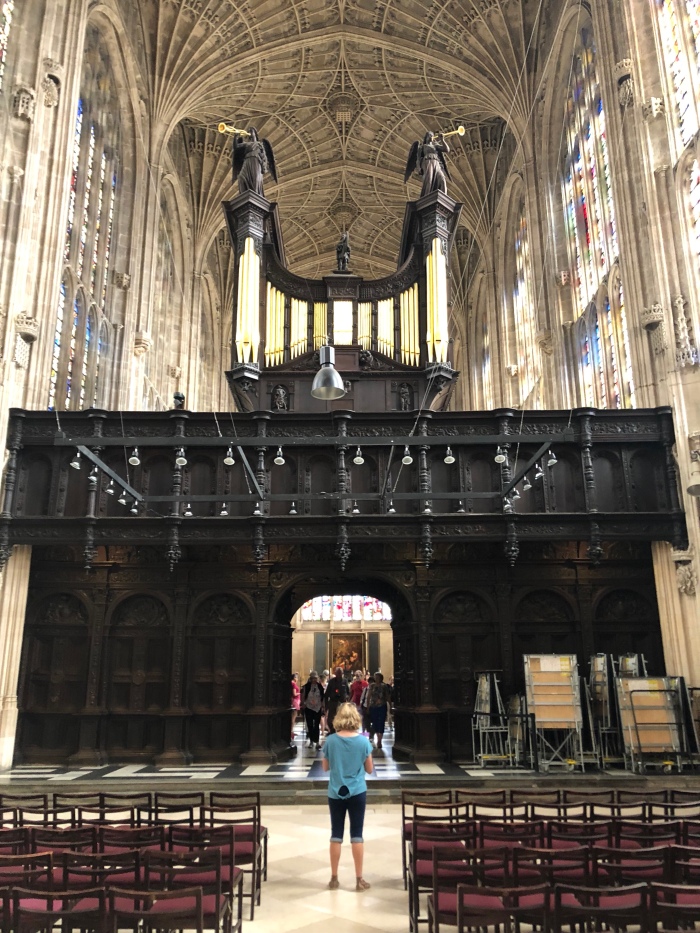 The fluted ceiling is one of the prettiest I’ve ever seen. And Ruben’s “Adoration of the Magi” adorns the altar. 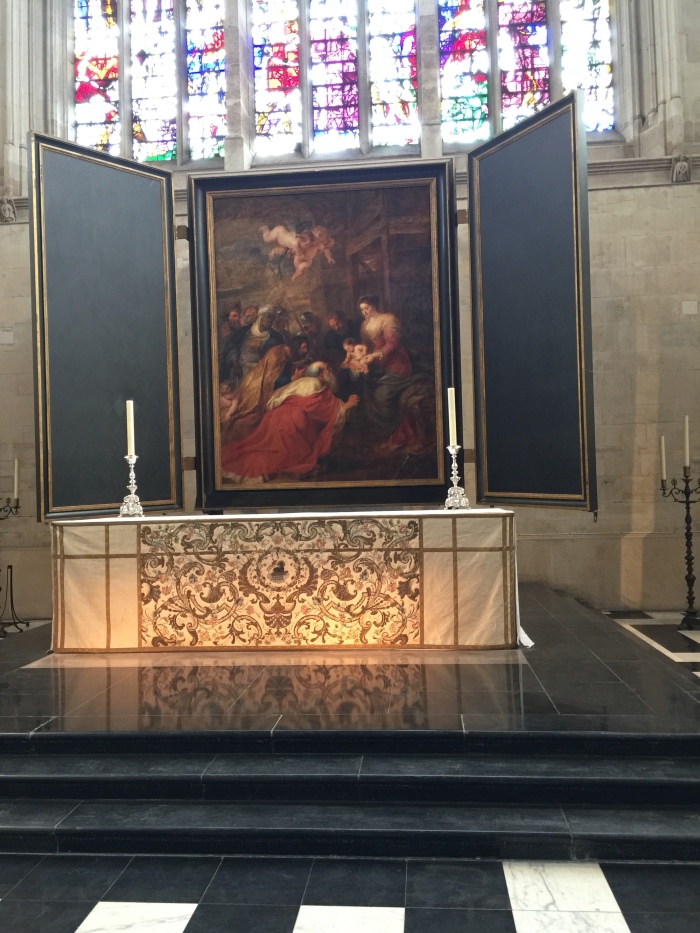 The kids decided to admire from their seats and entertained themselves by constructing origami boats out of the paper guides. Blake worked on his crossword. 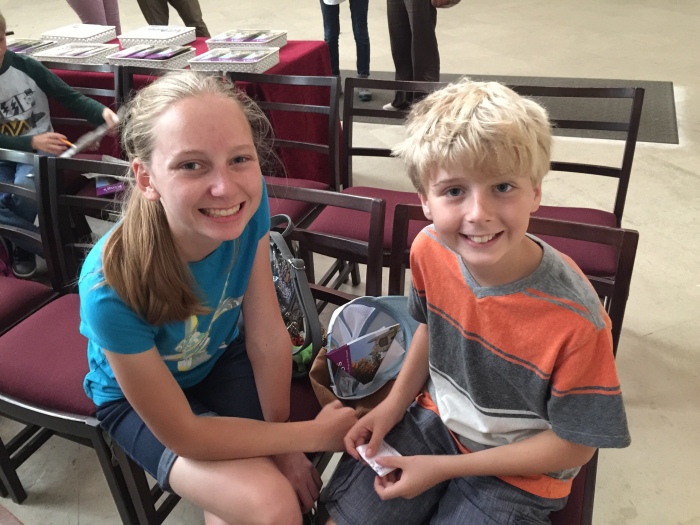 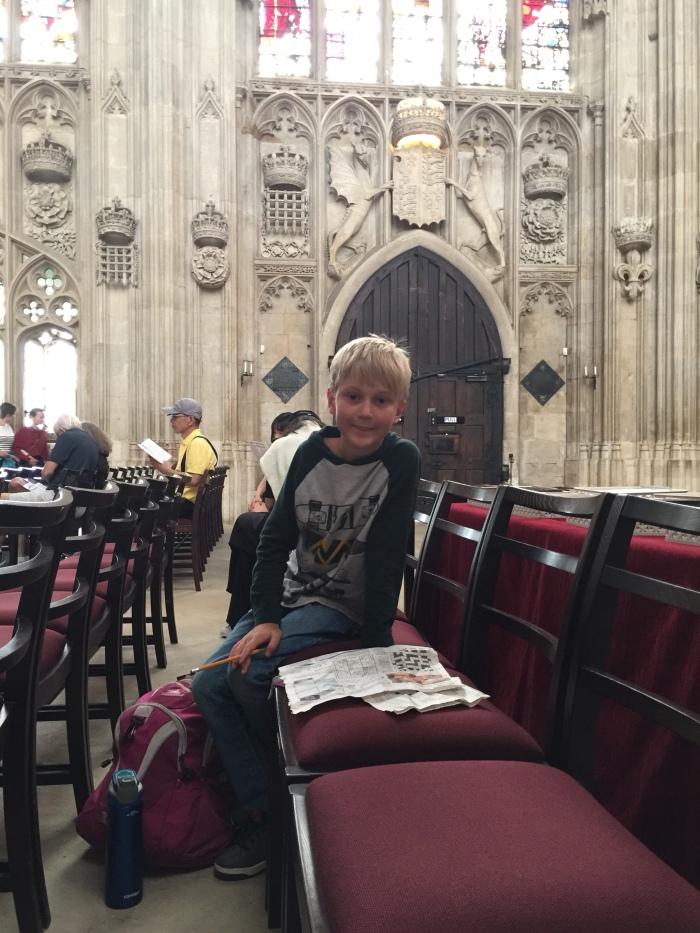 He also took the opportunity to do a little flossing. 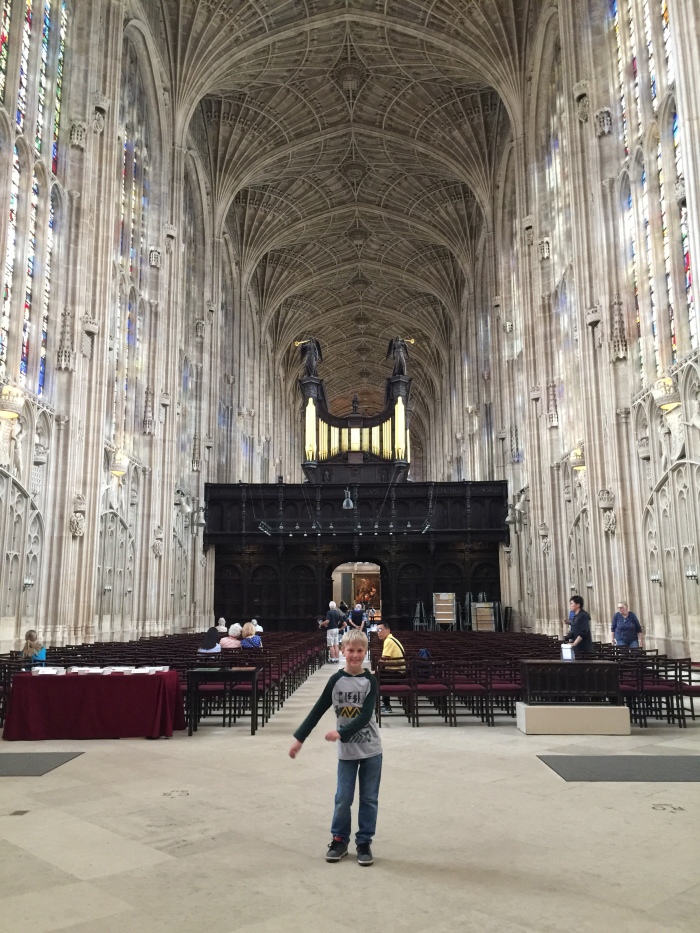 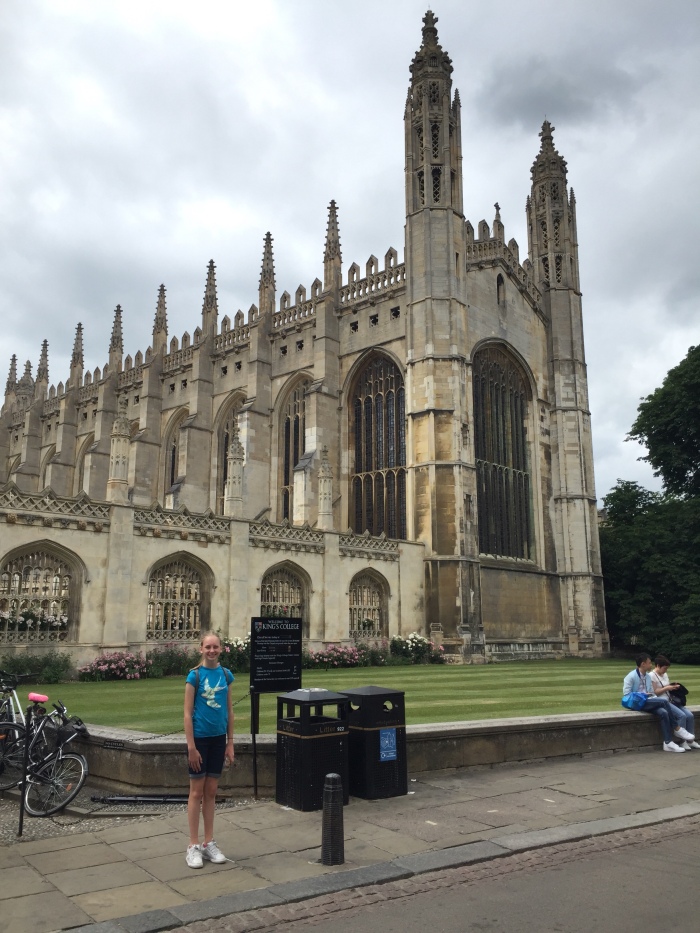 Treat time! Blake has fallen in love with Twister popsicles and he and Rusty both got those. Halle, Josh and I went for incredible fudge at the fudge kitchen. They make it in store where you can watch. We got a few pieces of still warm peanut butter chocolate fudge. HEAVEN. 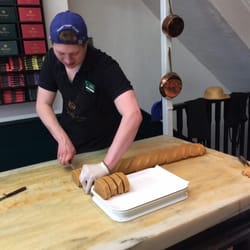 We also stumbled upon a cute little outdoor market. I can’t really express my love for British strawberries enough. THEY ARE SO GOOD. Rusty also picked up his favorite, fresh squeezed orange juice. 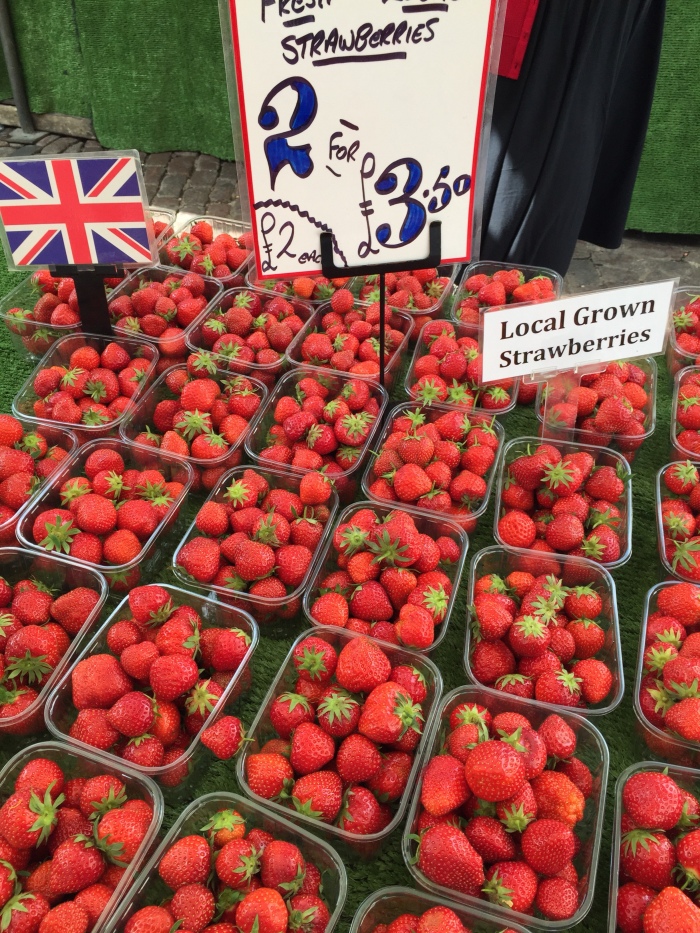 Now on to the main event–Punting down the Cam to see the college Backs. We had a groupon that we thought was for a guided tour. Turns out it was for self-hire. After running back and forth between Scudamore’s two different stand and having to leach WiFi off a nearby restaurant we were all squared away. They handed Rusty the punting stick and shoved us off. He yells, “and advice on how to work this thing??” So one of the punters jumps back on, give us like a 1 min tutorial and we were on our way. It took us a few minutes to figure out, but Rusty got the hang of it pretty quickly. I’m so grateful he’s always so flexible and ready to roll with whatever the day throws at us. 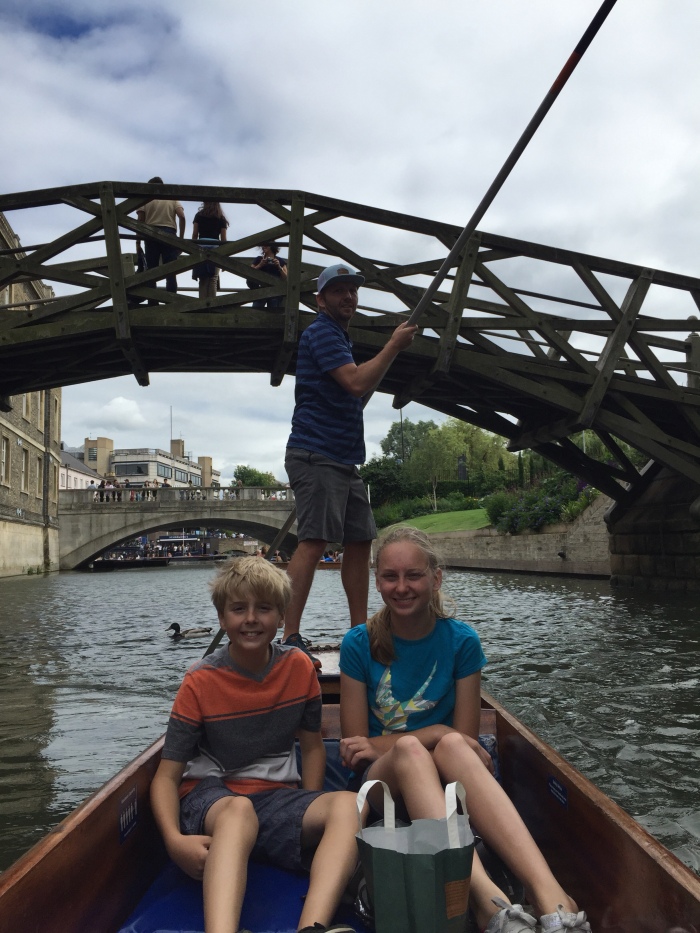 Punting was really fun. We loved relaxing in the boat and the kids, of course, found some ducks to feed. Blake even took a turn with the punting stick! 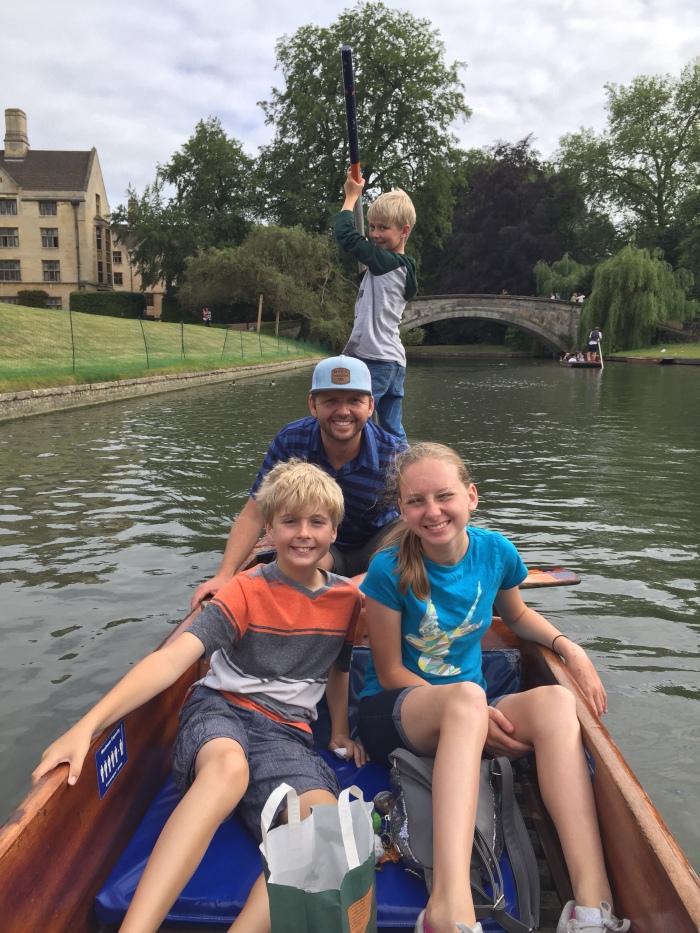 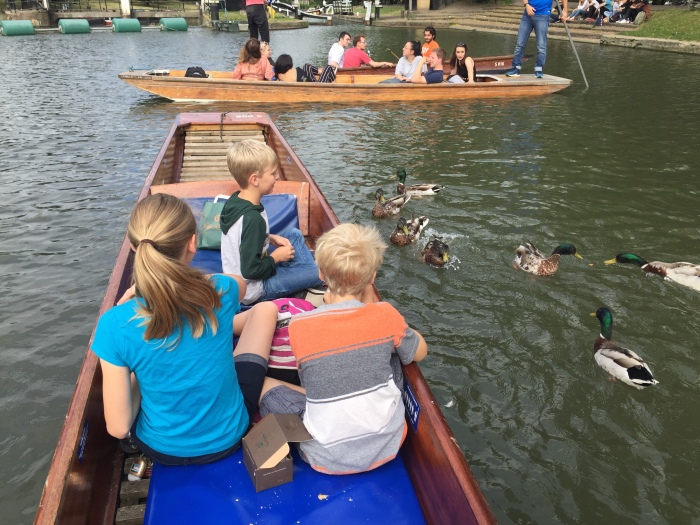 I tried to give Rusty a break, but I mostly just spun us in circles. 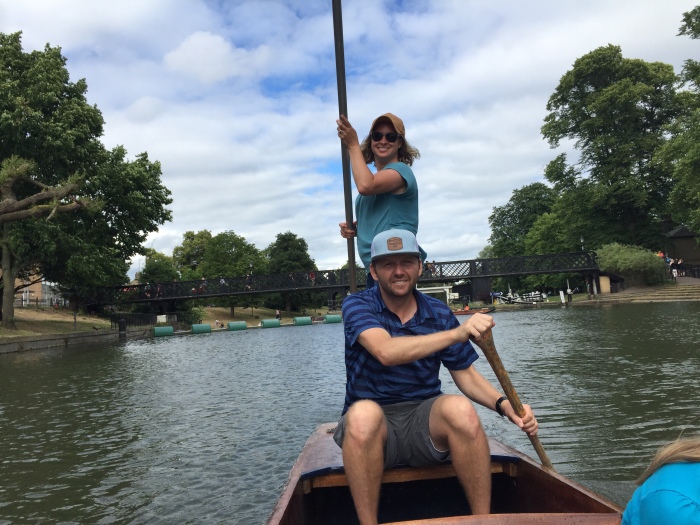 We punted along beautiful river banks, ivy covered buildings, and under many bridges. The prettiest view was once again Kings College chapel. 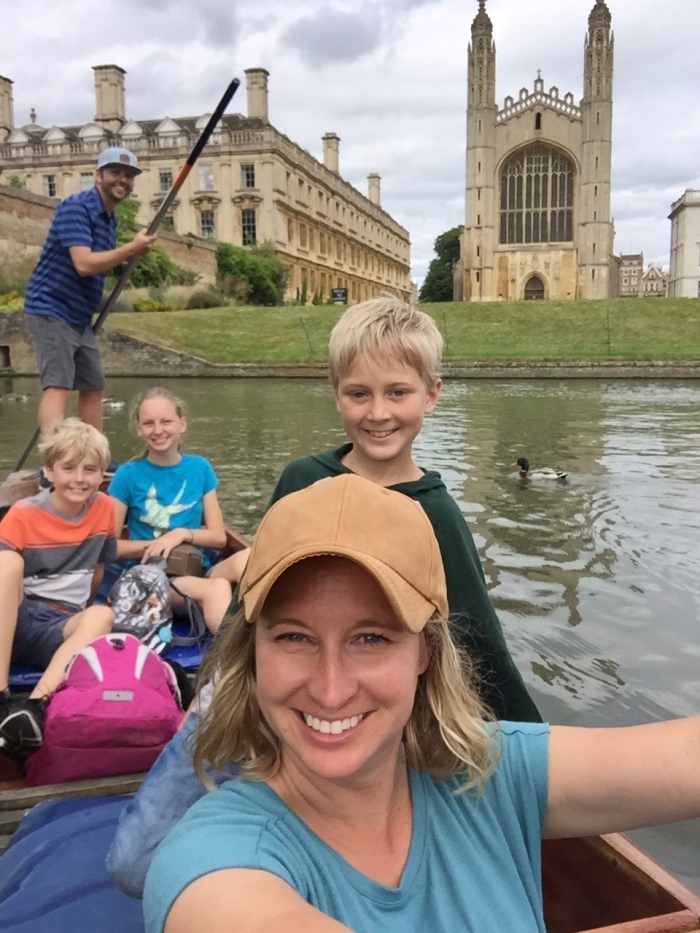 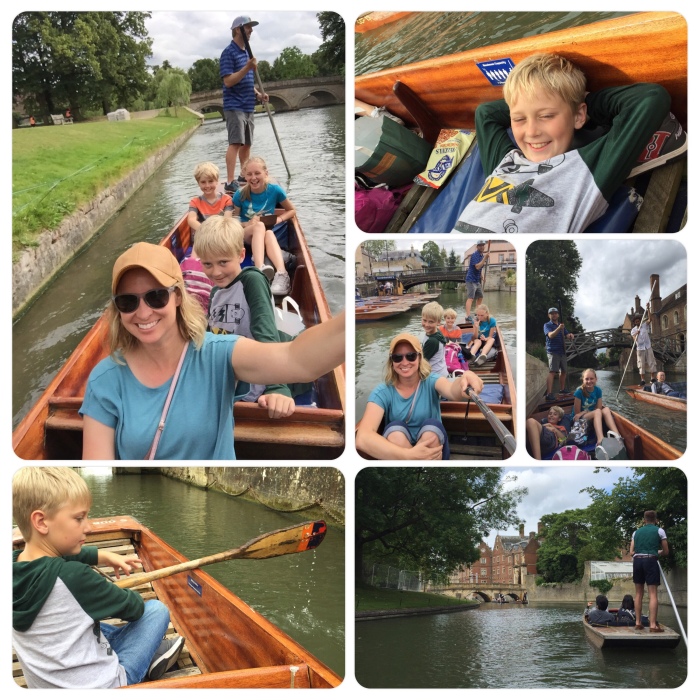 After we safely guided our punt back to shore we hit Bread and Meat for dinner. It was so delicious. Homemade lemonade, bowls of delicious, juicy meat and grilled veggies. Easily it was one of my favorite meals we’ve had on the trip. I wish it was in London! 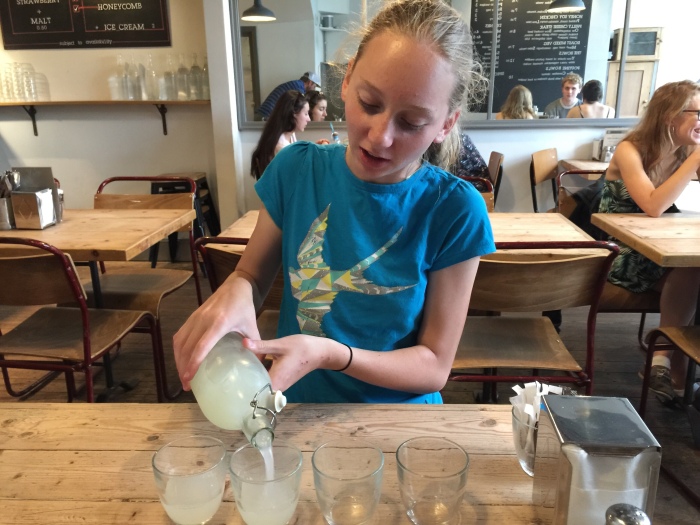 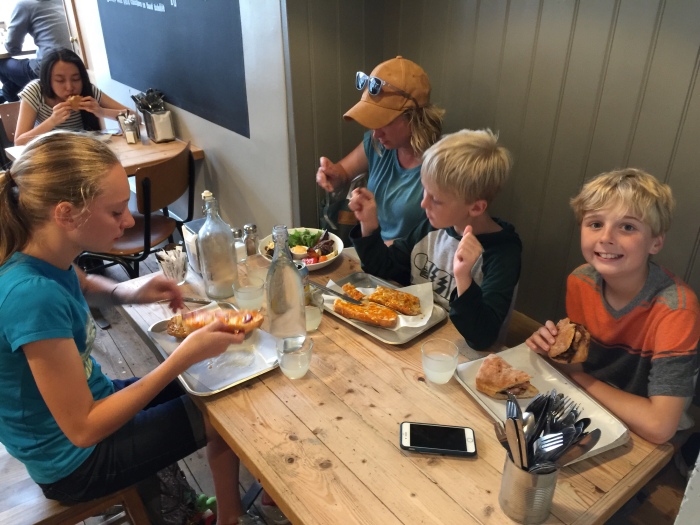 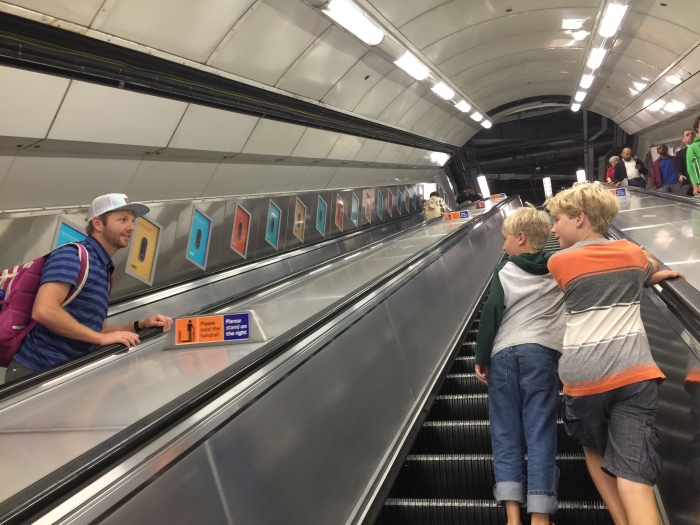