Thursday March 12th was scheduled to be opening night for Fiddler on the Roof.  Coronavirus had recently been declared a world pandemic, and social distancing measures were being put in place.  Well, at 2pm, they cancelled school for the next two weeks.  Effective immediately all sports, after school activities, and school were cancelled for at least the next two weeks.  That’s right.  5 hours before the curtain on opening night, the play was cancelled.  To say Halle was devastated is an understatement.  All those hours and hours of work, blood, sweat and heart. She called me while I was at Trader Joe’s and we both sat and cried.  Her at school and me at Trader Joe’s.  They got permission to record the show, so they went ahead and performed to an empty auditorium.  I was so so so sad not to get to see her on stage. 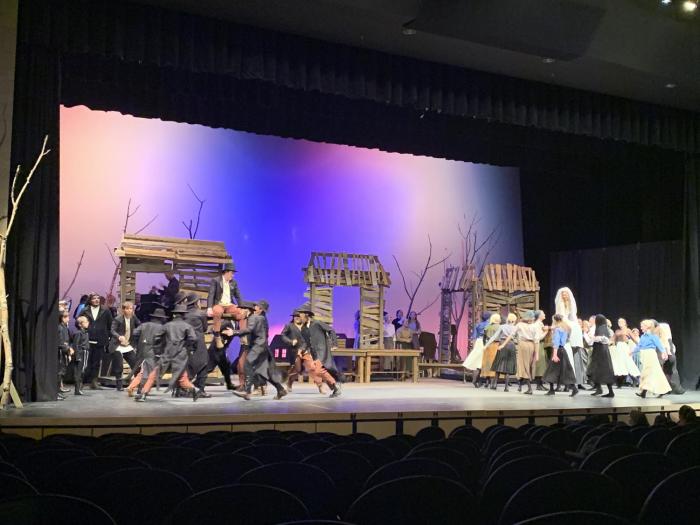 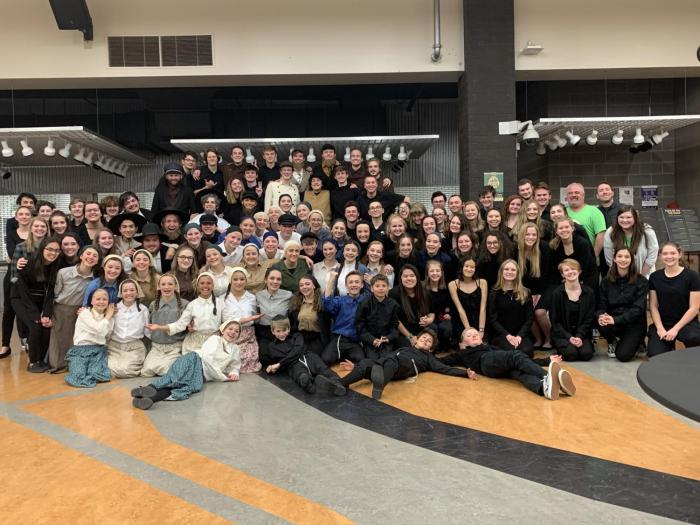 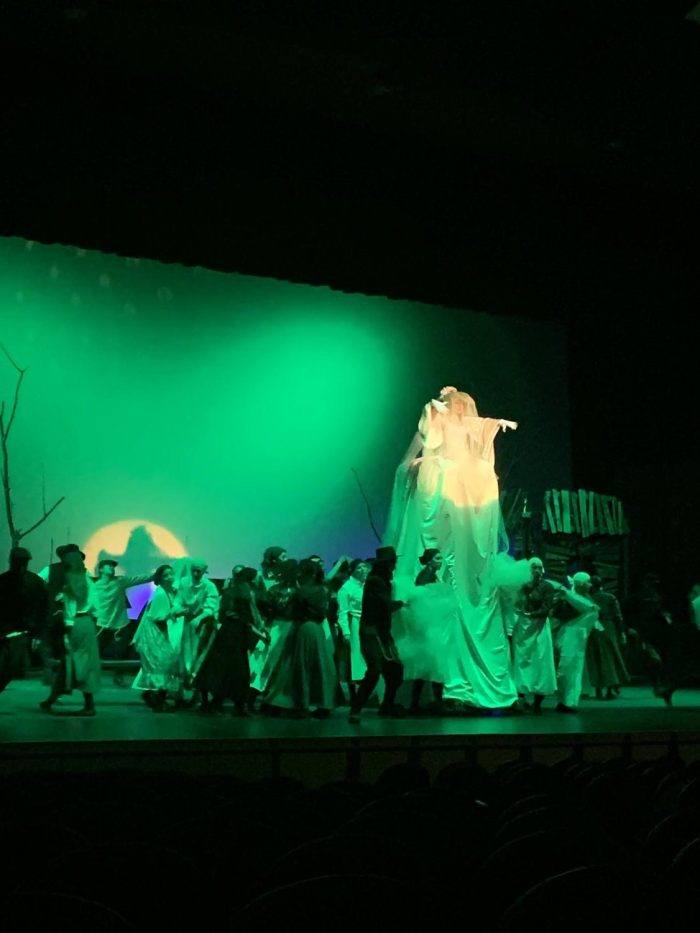 Brandon Bird wrote this article for the TigerTimes:

On Thursday night, the cast of Fiddler on the Roof conducted one final “rehearsal” in front of an empty auditorium. What was supposed to be opening night for the performers of Fiddler turned into a postponement of the musical. For months the cast has labored to learn songs, dances, and lines, the tech crew worked on precision with scene changes, kids that ran mics and lights fine tuned their cues, and of course, the musicians in the pit rehearsed an entire score of music. They worked tirelessly for months for this ONE weekend. A weekend that as of now, is being taken away from them by the ghost of virus future.

Fiddler on the Roof is a story of how a man, Tevye, tries to balance his place in the world. Tevye, played by Jack Laychak, is a gentle character who is grappling with a changing world while trying to uphold the traditions of his Jewish people. Many of Tevye’s big decisions have to do with his children and what is right for them. All of this is happening with the slowly descending news that Jews are being massacred or forced from their homes and villages, and that at any moment, Tevye’s village could be next.

The students encircled the stage in their green cast shirts waiting for word on what the plan is with the future. Matt Buchler, the principal of Erie High School, addressed the cast directly. Despite the desperate pleas from the students disguised as questions, everyone was swallowing the reality that there would be no audience and there would be no opening night or perhaps even, no live performance ever. Buchler left and the kids were given direction from Scott Wright, the Theatre Teacher and Director of Fiddler, “Tonight is going to be a rehearsal,” but it wasn’t just going to be any rehearsal, it was going to be a performance unlike any other.

What’s amazing to me is that the story of Fiddler seems to so appropriately mirror what has happened these last couple surreal days… families in a town trying to live their lives peacefully while the haunting unknown of the future continues to inch closer and closer. Much like the Coronavirus canceled the show, the Russian Government eventually forced a cancellation of life in the town of Anatevka. Everyone in the town had three days to pack up and leave. Every kid in the show had only three hours to squeeze in one more rehearsal.

The cast had been mic checked and everyone crammed into the choir room for one last set of directives from Wright. Sitting in the darkness with eyes closed, Wright recalled the time he was a junior in high school. Wright was cast in the local dinner theater performance of Oklahoma that was set to premiere on New Year’s Day. On Christmas morning Wright found out news that would send his teenage life into an existential crisis. The theatre he was to perform in burned to ash during the night and there would be no performance. Wright assured the kids that despite his devastation, there was so much good that eventually came from such somber circumstance, “imagine what good will come from this.”

At this point the room’s silence began to fill with soft sobs. It had truly hit the whole company now… this could very well be their last show together, this could be their last time together inside Erie High School as friends, and who knows, maybe for the seniors the last time ever inside of Erie. The raw emotion of the moment filled every crevice of that room. A final charge by Wright to perform as if there was an audience inspired focus though the tears.

The kids took to the stage and began the show. The kids were performing it like it could be their last. They were nailing their lines, singing and dancing so beautifully, and giving every ounce of energy to the empty auditorium. Joy filled the halls during intermission as the kids were filled with pride – they knew they were giving a performance worthy of a sold-out auditorium.

For years I have watched as so many seniors of this cast grew from little dynamic freshmen to stars of Erie High School Theatre. Their dedication to their craft was only matched by their dedication to treating others with kindness. I was lucky enough to share the stage with many of them during a scene in The Music Man, but this experience was something different. As a teacher, imparting knowledge and wisdom is your job, but everyone once in a while your students teach you. Performing a role with lines, albeit a small one, was something that was out of my comfort zone, but the cast treated me like I belonged. Jack and I would rehearse lines almost daily. While I was at rehearsal I would observe the dedication and passion that the students brought to their role. Kids like Mikaela Schindler, Kelsey McKercher, Colby Arlington, Ryan Erekson, Nick Evans, Elias Hinojosa … honestly too many to name. They ALL taught me something.

Putting yourself on a stage is terrifying. Forget the public embarrassment of making a mistake in front of an audience… with how hard every kid is working, you don’t want to mess up because you might let the whole team down. I can’t believe these kids love putting themselves through this every single year. They truly understand what it’s like to be vulnerable and take a chance. I have been around athletes my whole life, but many of these kids are braver than most athletes I have known. They showed and taught me what bravery is, and not only that, they taught me something; go figure.

Act 2 was slowly coming to a close. Every scene that inched the musical closer to its conclusion added to the weight of uncertainty in these kids lives. Will they perform this show in front of an audience in April? May? Even during the summer? I so desperately hope so. They deserve it, they deserve to have their act unquarantined.

I saw Mikaela come off the stage after an emotional scene with tears streaming down her face. The tears spread like a contagion behind the curtain. Kids baring their hearts and souls out with no audience to see them. The emotion was raw and thick again in that moment like in the choir room during Wrights’s speech. They used that emotion to push their final performing scenes to even greater heights.

The final song played and we took to the stage to bow in front of empty auditorium chairs.

The curtain closed and there was no applause.