Halle could not think of a single thing she wanted for Christmas this year.  So….I schemed a trip to NYC so we could do all the fun Christmas things together.  Halle was totally on board.  She paid her plane ticket (we scored $180 round trip out of JFK), and I paid for the rest for her Christmas.

It was forecast to snow for most of the day in NYC and we were worried that our flight might not get out on time. But, as luck would have it, we made it into the air on time. When we landed at JFK there were some delays getting to the gate because of the weather, but nothing too bad. We had planned on taking the air train and subway into the city but there were extensive delays because of weather and construction. So we grabbed a taxi instead. An hour later it dropped us at the Watson hotel. I didn’t know what to expect because this was the cheapest hotel in all of midtown. We walked into the lobby to a pleasant surprise! The hotel was awesome. We couldn’t have asked for more. Look at the cute tree in the lobby. 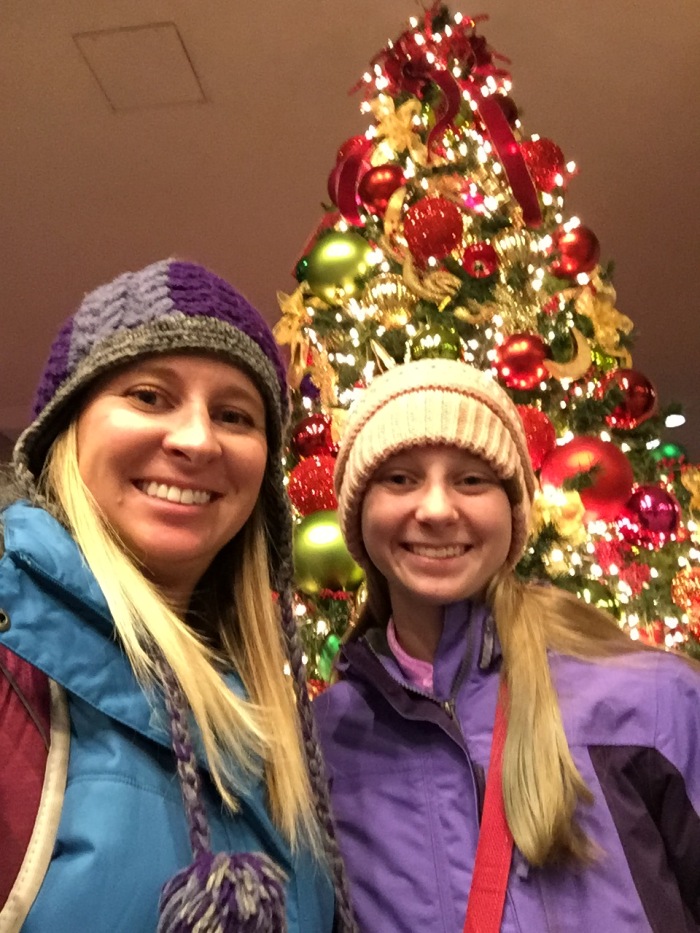 We dropped our bags in our room, bundled up, and headed into the night. Our first stop was Waffles and Dinges for a pre-dinner treat. We got the Turtle and we devoured it in no time. 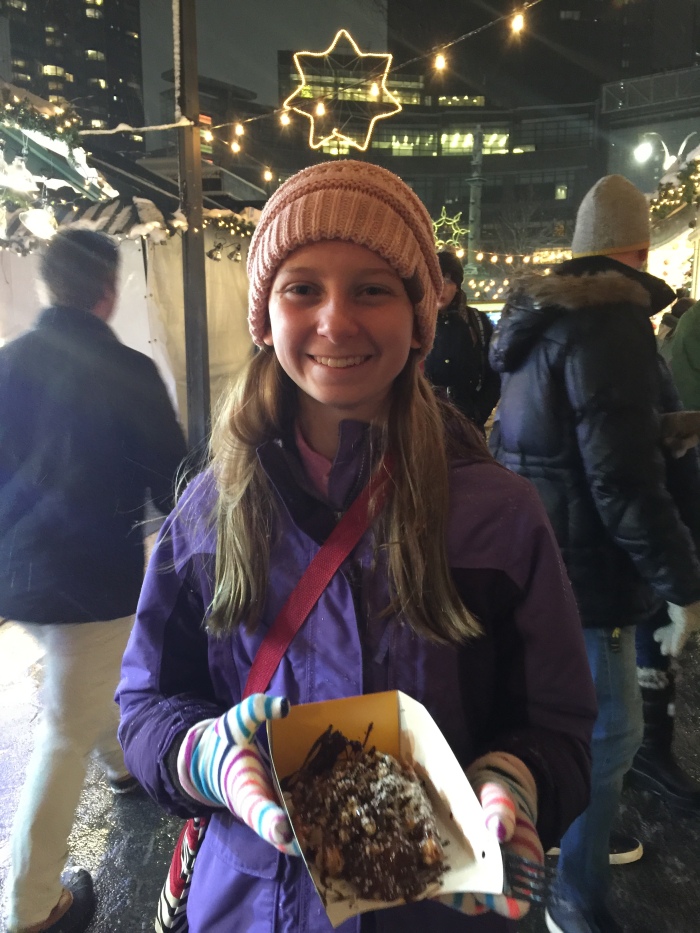 Then we walked over to the Rockefeller Center area to participate in all the Christmas cheer. We saw the giant ornaments and the huge string of lights. We stopped for Halal food and ate it in the lobby of a hotel so we could stay warm.

Now for the main event–Rockefeller Christmas Tree!!! The place was mobbed. Halle had to hold on to the loop of my backpack so I didn’t lose her. It was wall to wall people. But, that made it all the more exciting to turn the corner and see Saks all lit up. We came at the perfect time as a light show was just beginning. We oohed and ahed at the sparkly display. The snow was swirling softly around us making it a truly magical Christmas moment. 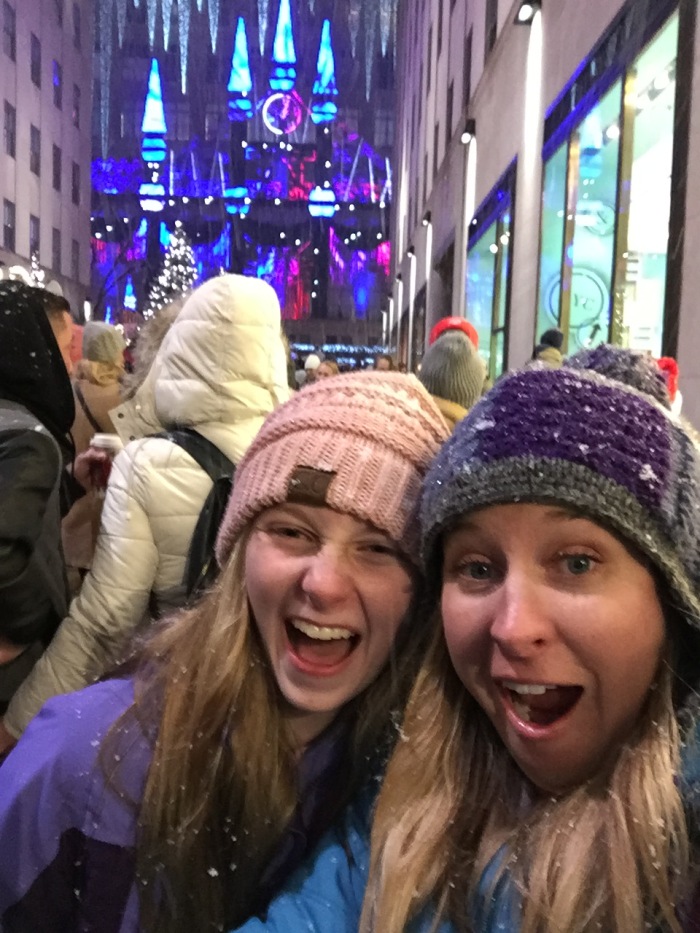 We fought our way through more crowds to make it to Rockefeller Plaza. I made Halle close her eyes until she was in perfect position to see the tree. She opened her eyes and was stunned at the beautiful sight. We could not stop smiling. It was hard to get pictures, but we elbowed our way to some good spots and took a million pics , hoping for one or two without a stranger walking through our shot. We managed to get a couple.

Next up: Radio City Music Hall for the 10pm show. We’ve both been super excited about this.  The line to get in was like 2 blocks long and we were freezing! Luckily it moved pretty quickly. Halle’s jaw dropped when she saw the beautiful chandelier. There is nothing else like it. We made our way to our seat and then spent the next 2ish hours laughing, clapping, cheering and feeling sentimental as we experienced the Christmas Spectacular together. I loved looking over at Halle and seeing her face light up with wonder and delight. We both absolutely loved the show. A trip highlight for sure.

It was close to midnight when we came out and the crowds had thinned. We walked back to our hotel and we’re very grateful to be inside the toasty warm lobby. We went to our room at hit the hay. Thanks, NYC, for a beautiful first evening!

Day 2 began with an egg, bacon and cheese on a roll being eaten in the back of a Lyft.

Our destination? Dominique Ansel for a Cronut. The Dec flavor was eggnog caramel and it was delicious. We also had to try out the adorable polar bear. Halle said that usually pastries that cute don’t taste good. She was right. 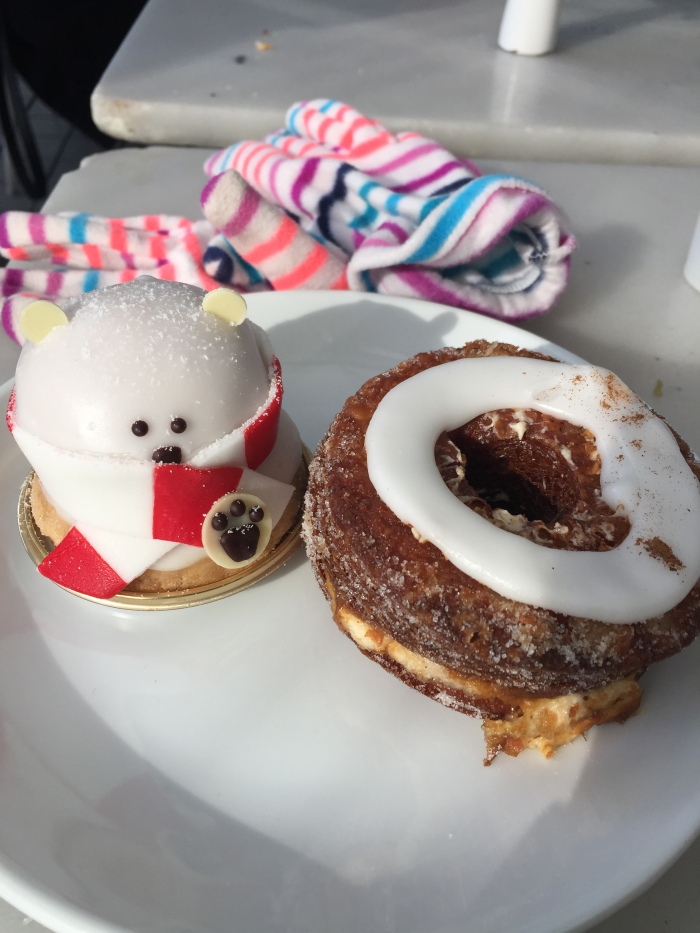 Then we made our way down to the tip of the island to ride the Sea glass Carousel. Turns out there is not one piece of sea glass in the entire thing. Only hard plastic. This was a bit of a disappointment, but the carousel itself was pretty fun. Not only did the fish go up and down, but they also spun in circles, making for a fun, unique ride. And the lighting made for some really cool pictures!

When we were done we snapped a quick picture with a tiny Lady Liberty in the background and then started our walk to Brookfield Place. We got a pretty stunning view of WTC 1 along the way. 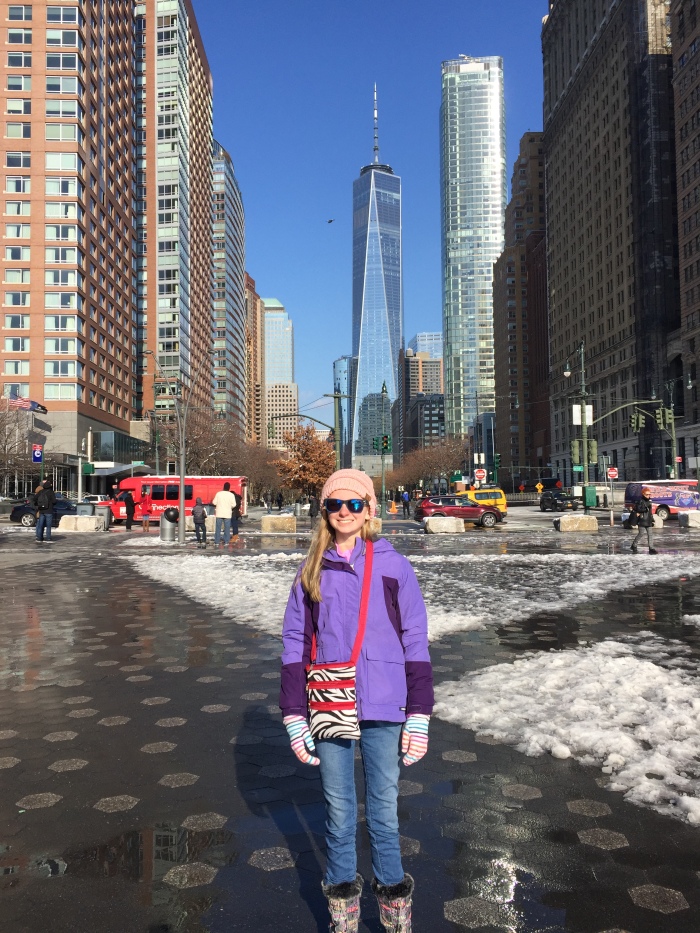 Brookfield place is home to 650 luminaries that are suspended from the ceiling. Every 1/2 hour they light up in time to a rockin’ Christmas song. It was pretty fun to see! I grabbed some lunch at Dig Inn (I LOVE this place!) but Halle wasn’t very hungry so she just got some chips and salsa. 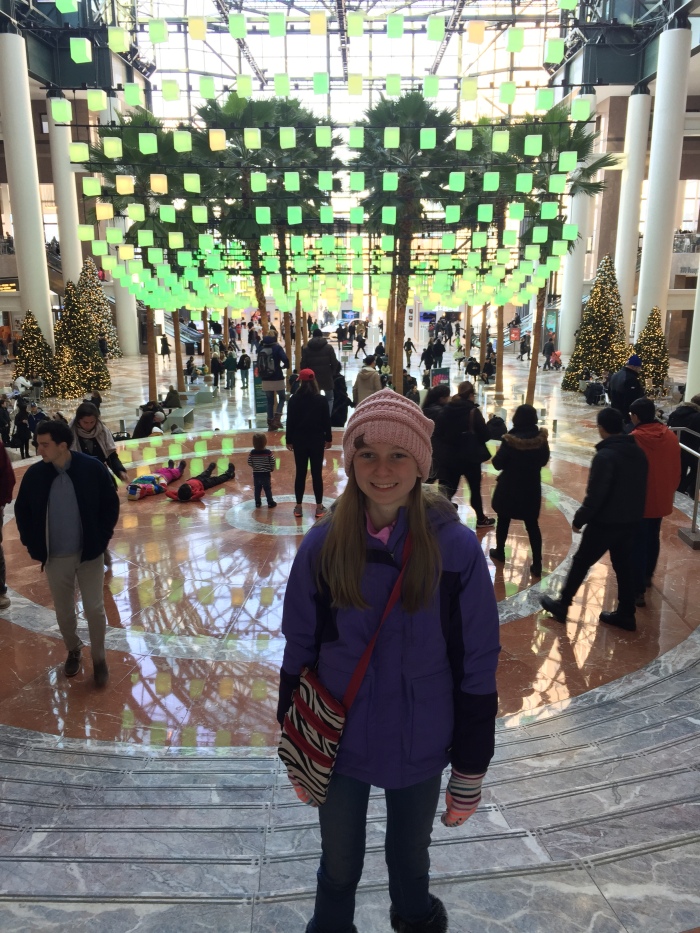 Next up was the Union Square Holiday Market. We both agree we could have done without this. The crowds were INSANE. So crazy that you couldn’t even really see into any of the cute shops. We didn’t stay long. Halle did get a really pretty necklace of the NYC skyline, so that make braving the mobs worth it.

She also wanted to get a new book for our long subway ride later that evening. She said we should let the magic of NYC lead us to a bookstore. Sure enough about 500 feet from where we stood was a gigantic Barnes and Nobel. She picked out a book and then we were ready for a snack. We tried out Vanessa’s Dumplings. They were then perfect little thing to get us through the afternoon. 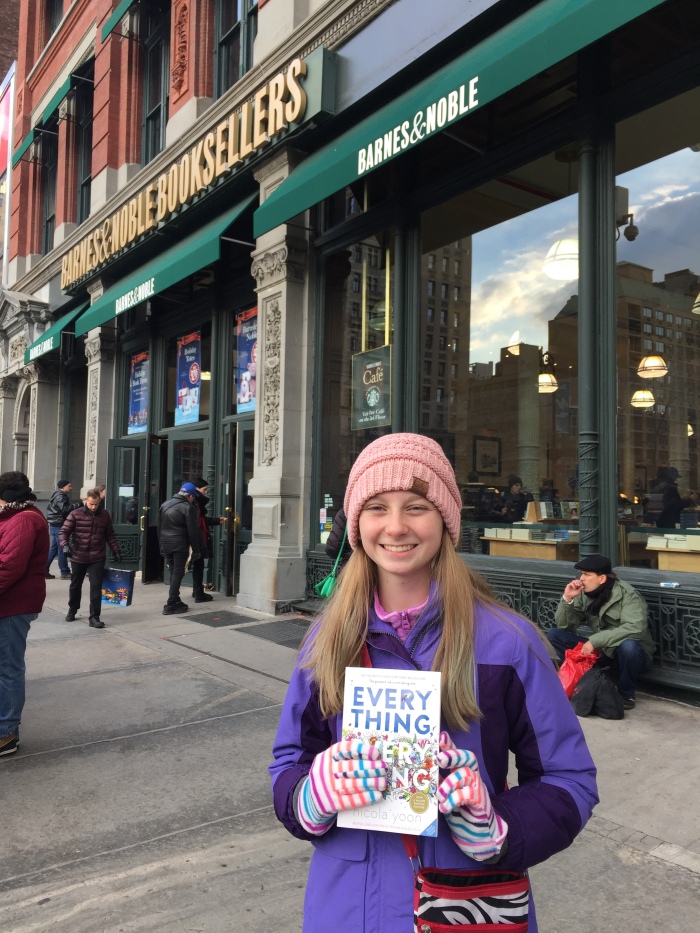 From there we made our way over to the Google pop-up store. This was super fun and I’m really glad we did it. We waited in line for our turn inside the giant Holiday snow globe. We were buried by tons of white balls in a giant ball pit. It was a blast to wade around in the balls and feel like we were in a snow cave! We also played with some VR goggles and got a goofy Holiday picture taken. 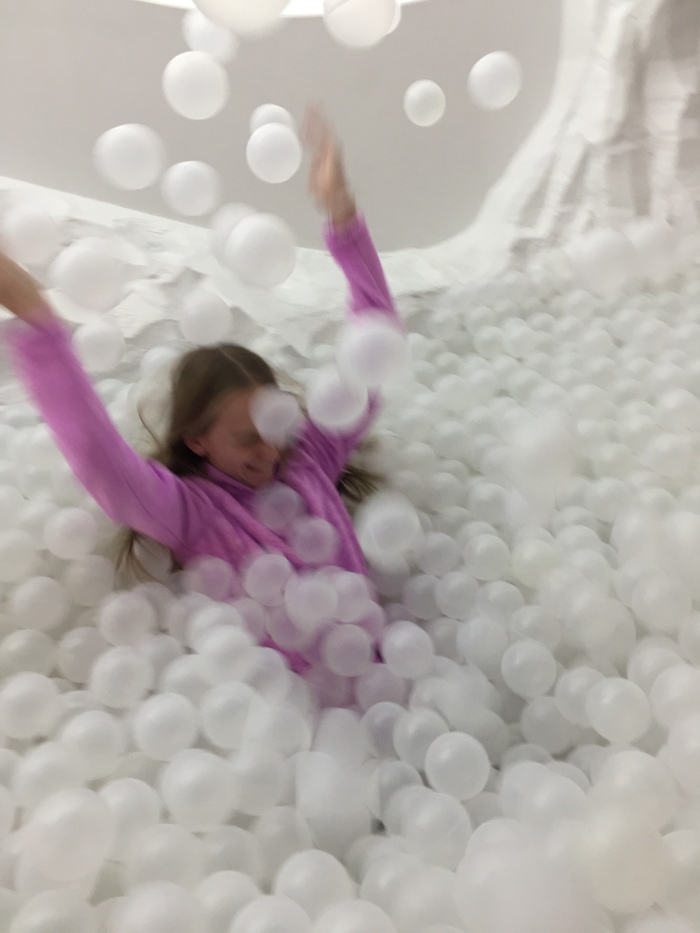 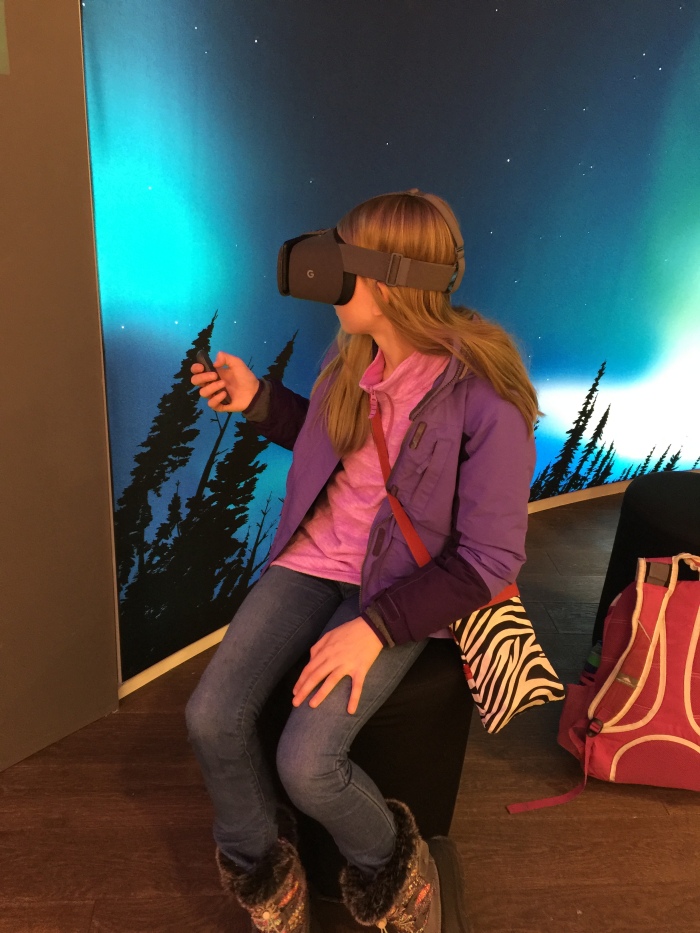 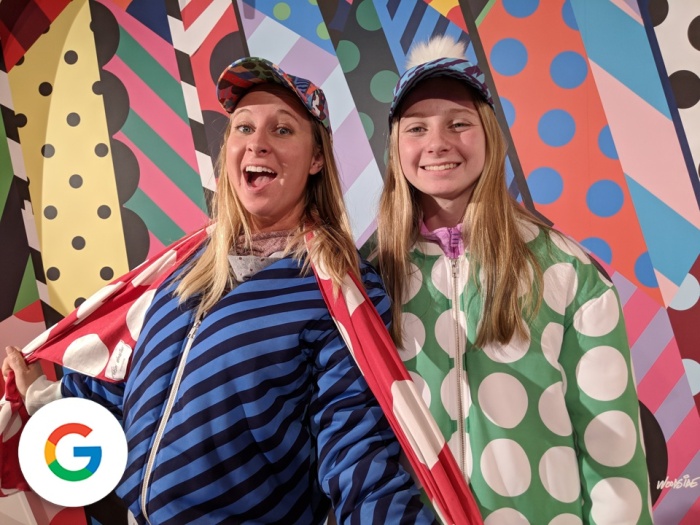 Right outside Google had free pedicabs that would take you wherever you wanted to go. So, we hopped aboard and had the driver (biker??) take us to Madison Square Park. Riding a pedicab right down the middle of NYC streets was crazy. Cars were whizzing by us and I’m pretty sure the driver hit his bike wheel into the bumper of a taxi at least twice. I’m glad we did it!

We made a quick stop to see the Gingerbread house then it was time to hop on the subway to Dyker Heights.

I had booked us a Free tours on Foot to go see the famed Christmas lights. It’s no easy task to get to Dyker Heights. The subway ride is loooong. But we made it and started our tour. I think both of us expected the lights to be a little more crazy than they actually were. We did see several GREAT houses, but we walked around for 2 HOURS. That’s probably about 1 hour longer than it needed to be. Our tour guide was pretty snarky and not particularly helpful or nice. Not the best qualities for a “pay what you wish” tour 🙂 We did get to see the house that started the whole Dyker Heights craze. That was intense! To get back to the hotel we had a bus ride, a subway ride and then a decent walk. (We also stopped at a coffee house to grab an apple cider where we were held hostage by a man who wanted to share his whole life story with us) We were pretty hungry by this time and so we grabbed pepperoni slices from a place by our hotel called Fluffy’s. And candy bars from Walgreens. We were frozen solid by now and so we cozied up in our pajamas and watched a cheesy Hallmark Christmas movie before drifting off to sleep.

Day 3 started with a bang. Literally. A bomb went off in Times Square and I swear the blast woke me up. Police sirens were blaring for the next 10 min and Halle slept through the entire thing! Didn’t even stir. The bomb went off prematurely and critically injured the bomber but thank heavens there were no other casualties. The world just gets crazier and crazier. What is wrong with people??

The strangest part is that the city just kept moving along like nothing had happened. The subways weren’t making any stops at 42nd street, but everything else was running like normal. We went to Jacob’s Pickles for brunch and Halle had the most divine biscuit French toast. Soooooo good. Halle declared it the best meal of the trip. 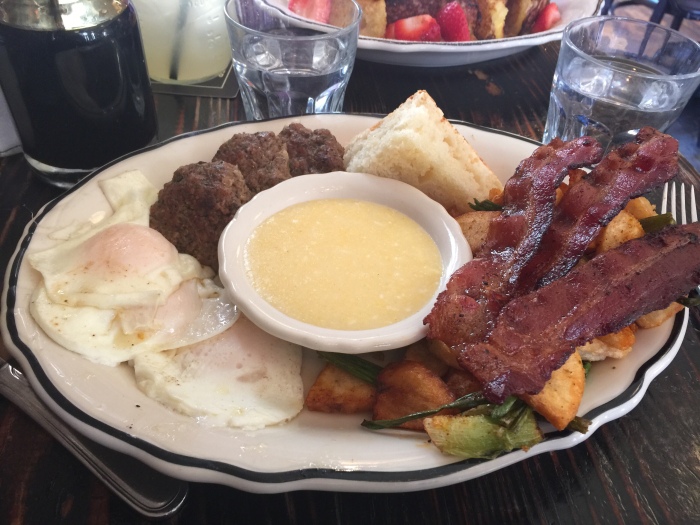 Then it was on to our Holiday Window tour! Our first stop was Macy’s. The windows were beautiful! 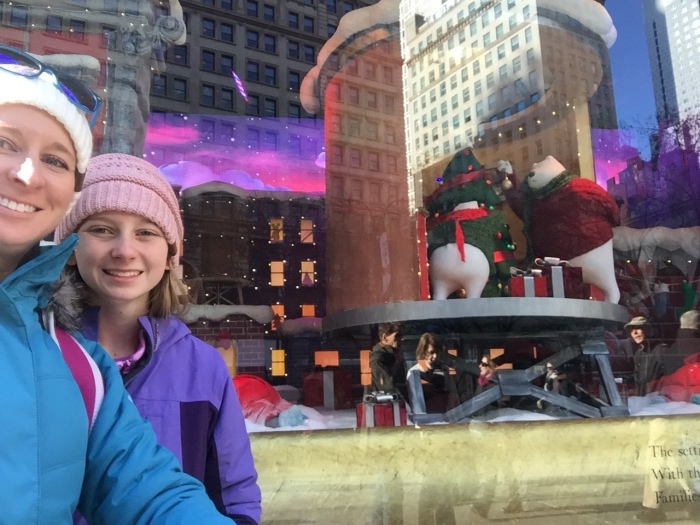 Then we were off to Santaland! This was the first year that Macys had a reservation system and it made everything quick and easy. Santaland was so cute. Our favorite part was the cute little ducks watching an outdoor movie around the fire. And of course, meeting the Jolly Old Man in Red.

The library was next. We loved seeing the lions with the wreaths around the necks and the beautiful Christmas tree. 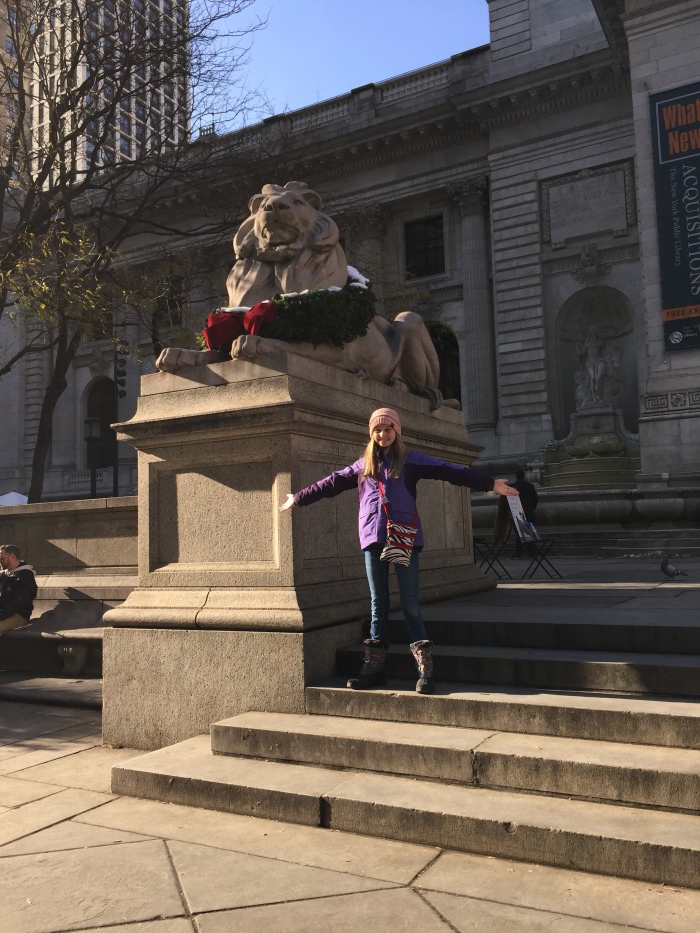 The windows at Bergdorf Goodman were so cool. Our favorite was the window dedicated to the Museum of Nature and Science.

Saks Fifth Ave looks different during the day ☺️ Their windows were a celebration of the 80th year since the release of Snow White. 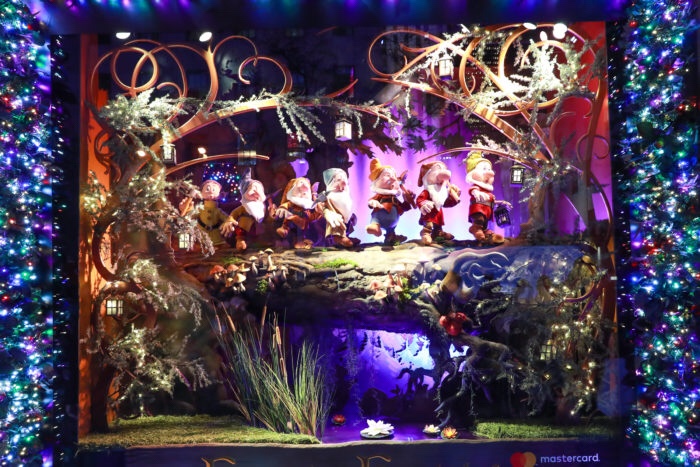 <<
rney's wins for strangest, most non-Christmasy windows. They were weird! 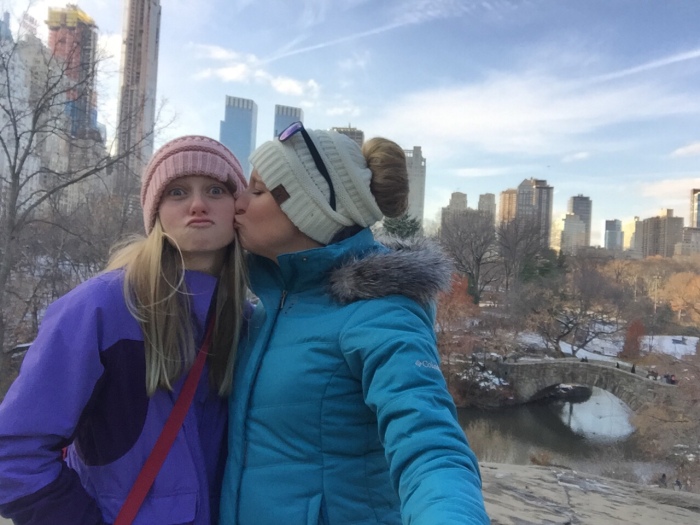 <<
r last stop was to the Plaza Food Hall for a late lunch. I was ecstatic to finally try crepe cake from Lady M cake boutique. We tried the chocolate banana and it was heavenly. We also shared some homemade pasta with alfredo sauce and fresh squeezed apple cider. A perfect Halle meal.

<<
tting to JFK on the subway was a long process, but we made it. Our flight went off without a hitch. We were so sad to have our magical trip come to an end. I couldn't have asked for a better Christmas gift than this wonderful trip with my beautiful girl.