On a whim, about 8 months ago we booked a hotel room in Albuquerque in case we decided to go to the ballon festival. It’s long been on my bucket list as a place to take the kids before they are grown up. As the day approaches we solidified our plans and decided to go for it!

The drive was uneventful and we arrived about 5pm. We dropped luggage at the hotel and then walked to old town for dinner. The restaurant was so cute. We are outside in a little courtyard where we were favored with Spanish music played by two men: one on a harp and one on a guitar. It was so cool!

Then it was early to bed because our alarms were set for 4:45am! We brought the cot for one of the kids to sleep on. No one really wanted to take it, but in the end Blake decided he would take it so he could sleep next me to and hold my hand. I fell asleep with his little hand in mine and it was the sweetest thing ever.

The next morning we arrived at the Mall parking lot to catch a bus to the Fiesta Field at 5:20. We had read that usually people waited for about 2-3 busses before they got on. Well…..that was NOT the case this morning. There were THOUSANDS of people in front of us. These pictures don’t do it justice at all.  The line was probably 1/2 mile long.  We had hoped to be at the field around 6am and we didn’t get there till 7:45. We were pretty disappointed to miss the dawn patrol and also the first wave of the mass ascension. We were bummed, but I was proud of us all. Everyone managed to keep a pretty good attitude even though thing did not go the way we had hoped.

Here is a view of mass ascension from the bus:

There were still plenty of amazing balloons for us to enjoy when we got there. I just love hot air balloons. They are so beautiful and fun. It was so neat to see them filling up and then taking to the skies. These penguins were a family favorite for sure. 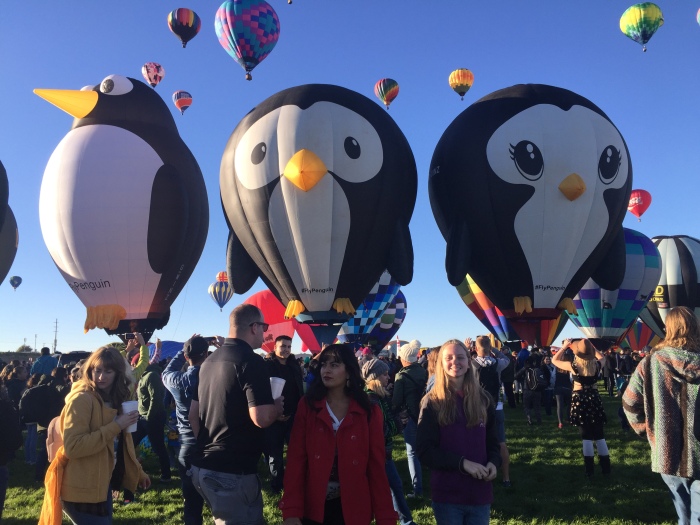 And Darth Vader and Yoda were so fun. The whole crew was dressed in Star Wars costumes and it added such a fun atmosphere. 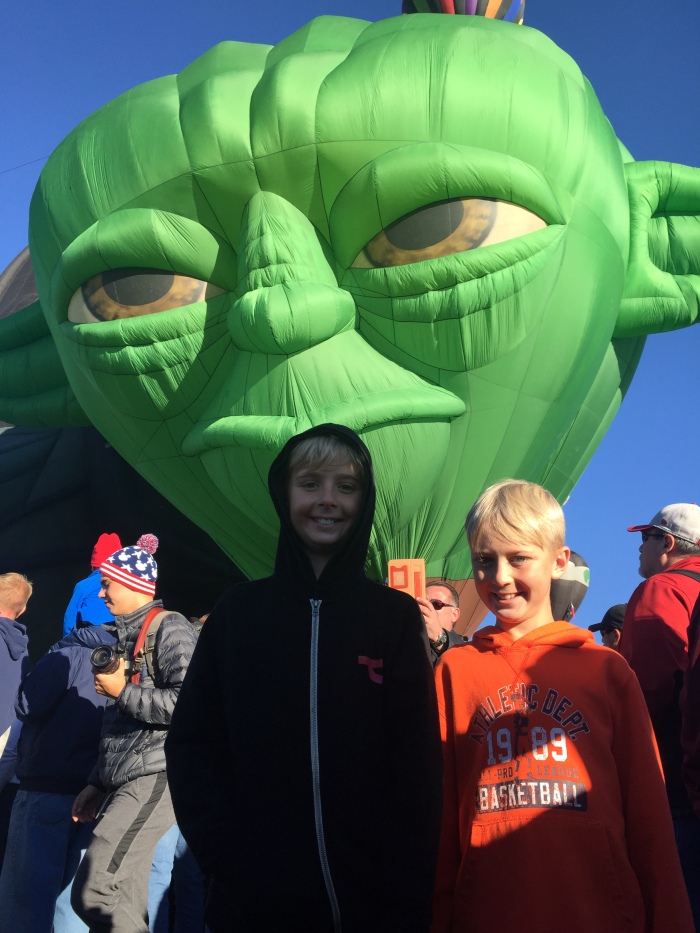 Vincent Van Gough was, hands down, my favorite balloon. Isn’t he so amazing??

We stayed until the very last balloon took flight and even got to watch some balloons come back in for landing on the field. 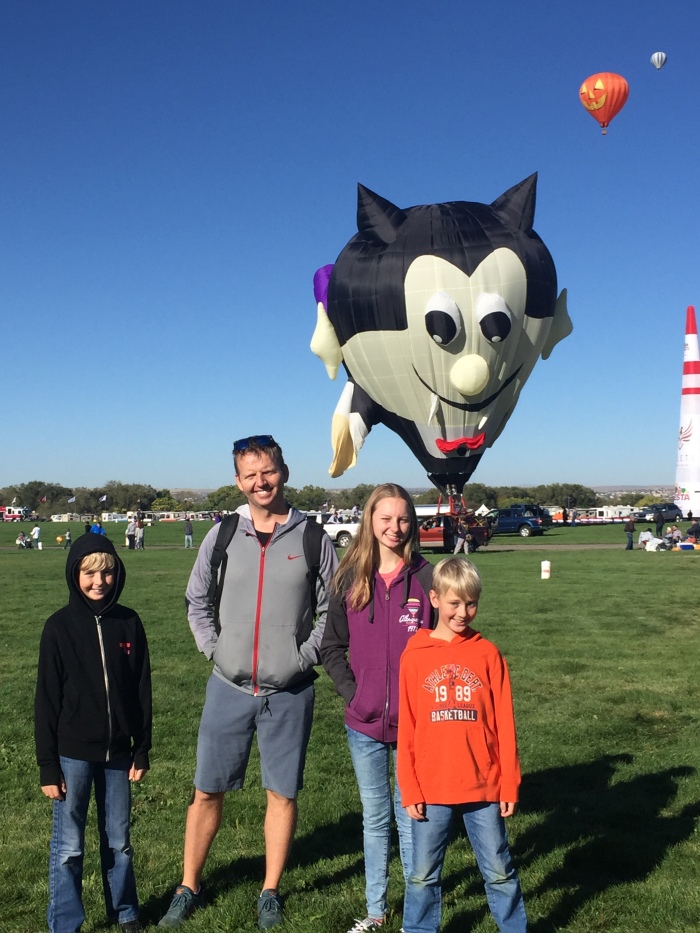 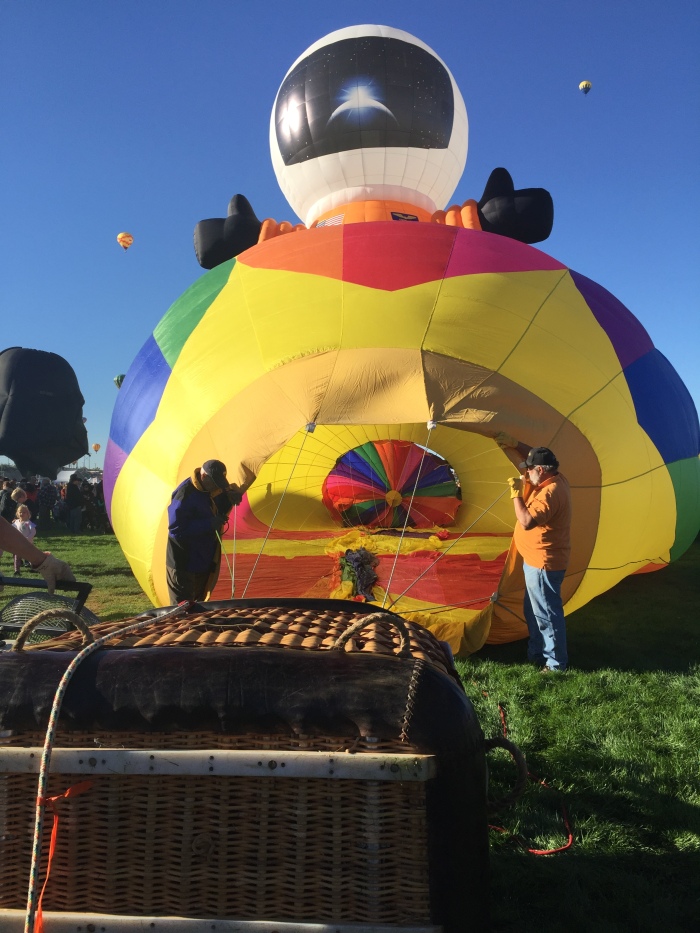 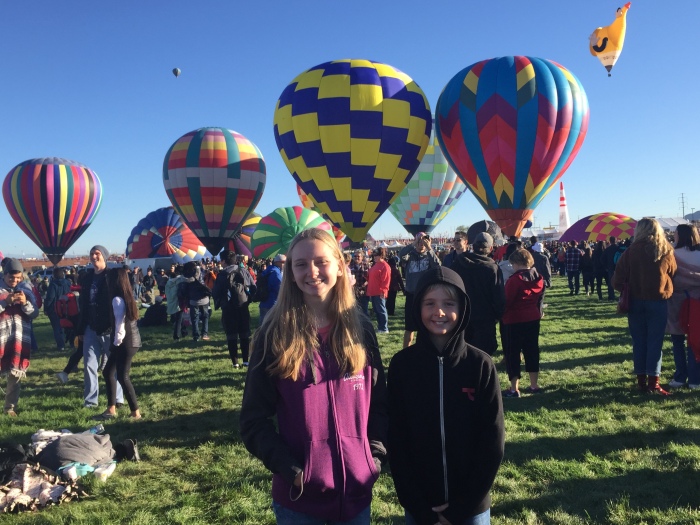 Darn it all—the line to get back on the bus was equal to the morning line! We decided we were not really in the mood to stand in another line so Rusty took the kids to the Hot Air Ballon Museum that was near the field.

I found a chair to bask in the sun and listen to General Conference. I came in right at the very end of Elder Cook’s talk. Rumors have been running rampant about church changing from 3 hours to 2 hours. I didn’t hear the announcement but it sure sounded to me like that’s what Elder Cook was talking about. I texted rusty, “I’m pretty sure 2 hour church was announced!” Followed by a furious google search which confirmed it was true! WOW!

After an hour or so, the bus line had dwindled and we caught a bus back to the mall where our car was parked. Halle has a nice little siesta and the boys went swimming. I love when Josh and Blake play together. They had so much fun in the pool. Especially doing cannon balls into the hot tub. 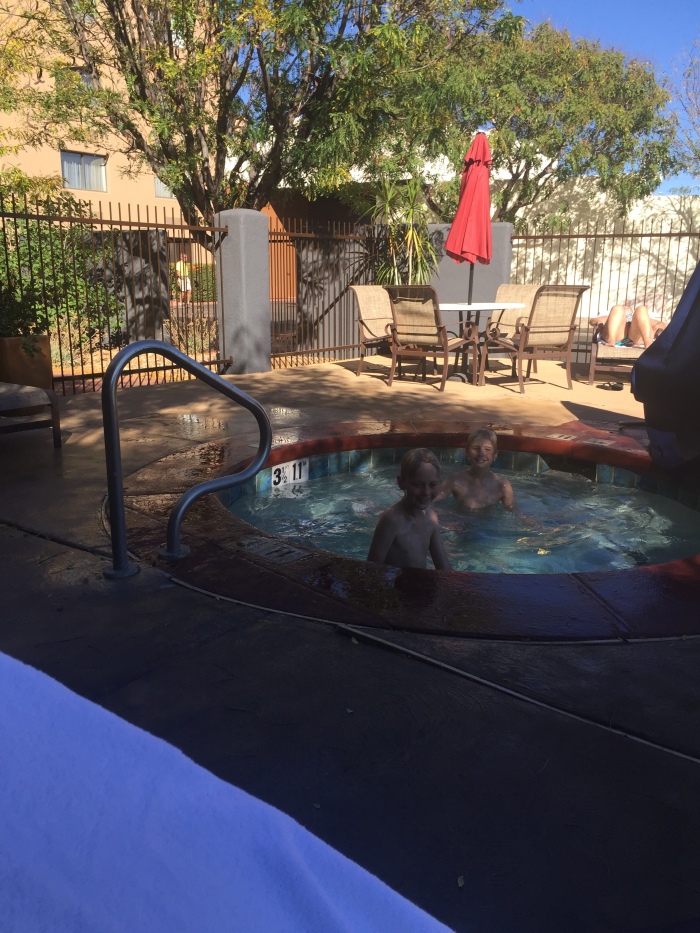 We grabbed dinner from a place called Blake’s Lottaburger. This make Blake super happy. He had seen it on the way into town and was insistent that we try it.

And back to the busses we went! I was most excited for the night glow, but Mother Nature had other plans. Luckily the busses were running much more smoothly and we only had to wait about 10 min. By the time we arrived at the field the wind was blowing too hard for the balloons to inflate. I was so sad!! We kept hoping the wind would die down, but no such luck. There were fireworks scheduled for 8pm so we decided to stick around. We spent some time visiting the fun booths, spinning prize wheels and drinking fresh squeezed lemonade. Blake earned $5 for sleeping on the Cot and he bought a light up gun. Josh hasn’t spent his souvenir money yet and he got a fun light up necklace made of hot air balloons. 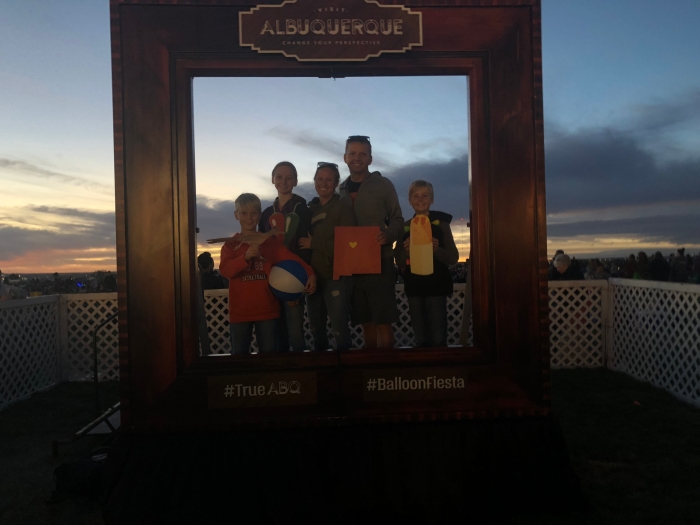 The fireworks were fun and then we made our way back to the hotel.

We all slept in late the next morning and then before heading out of town we did a little petroglyph hike. The hit of the hike were the mass amounts of millipedes. Rusty told the boys he’d pay them $1 if they could find 25. Blake was all in for that! He searched and looked and in the end found well over 75. Josh was the only one brave enough to pick one up. That feat earned him an extra dollar.

Then I dropped Rusty and the kids off at an awesome park and went and grabbed delicious açaí bowls and some lunch food. We had a quick lunch at the park and then started the journey home. 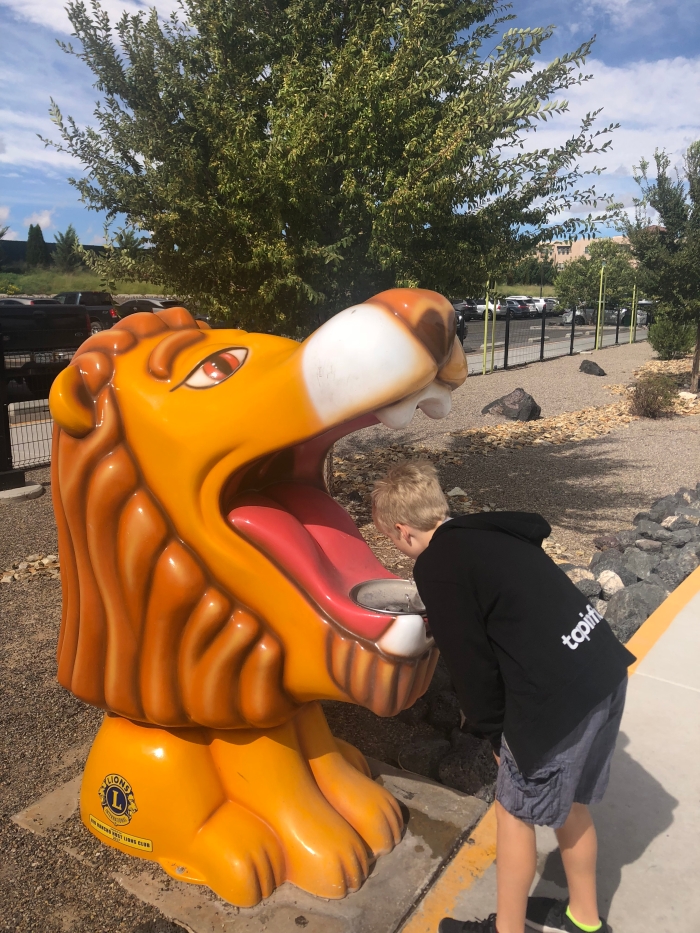 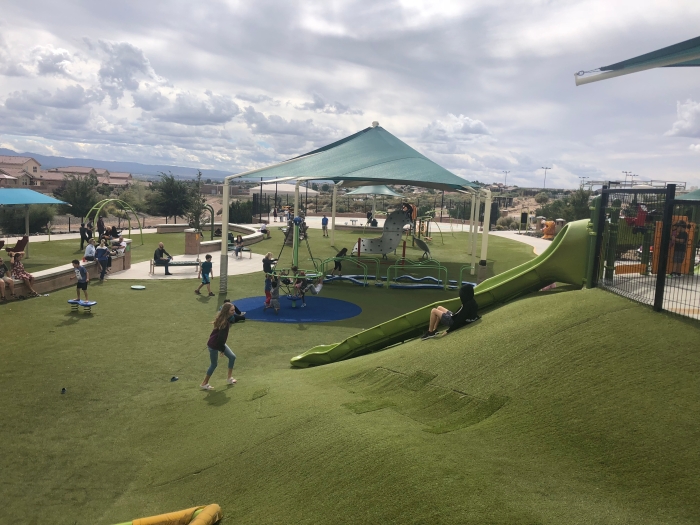 We stopped outside of Santa Fe at Pecos National Historical Park to see the ruins of a Pueblo.  Halle LOVES this kind of thing and her and I took the long walk all the way around the wall while the boys just hung out at the main structure.

The drive felt sooooo long and it was pretty rainy for most of the way. We were so happy when it was over.

Even though things didn’t work out how we planned and we saw like 1/2 the balloons we though we’d see, it was still worth it. I’d do things a lot differently if we went again, but I’m always glad to spend a few days with my little crew. 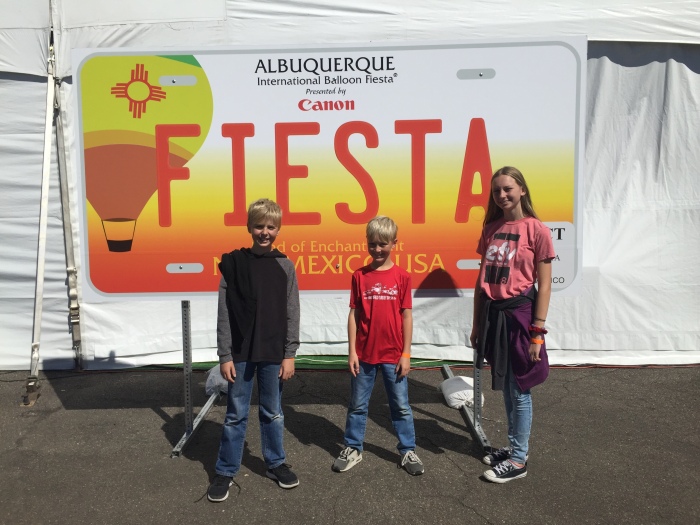