This week we are hitting the tourist stuff hard. We divided the city into sections, made a daily itinerary, and bought a London Pass. And then the weather decided to act like summer. It’s forecast to be about 85 most days this week. And we are already missing our cloudy, 72 degree days!

The day started like most our days start. On a train to Victoria Station. 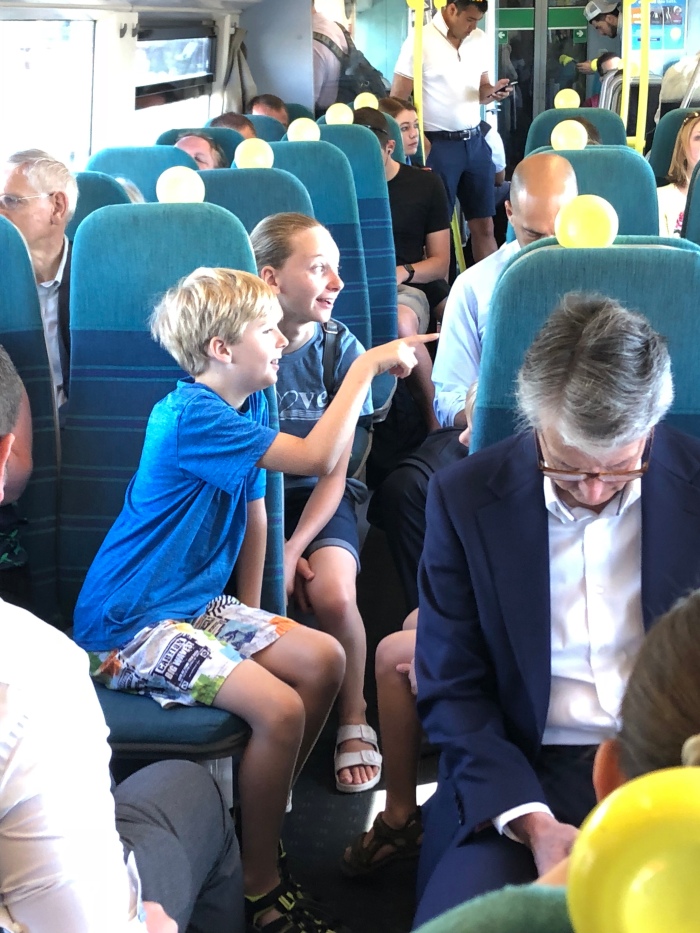 From there it was just a quick walk over to the Royal Mews. I am a big fan of carriages, so I was excited to see these. We also got to see some of the horses. Josh is NOT a big fan of horses and he immediately broke out into hives. So he and I rushed through that section as fast as we could with him holding his breath. Poor kid.

The coaches were fun to see. We really liked the Diamond Jubilee coach. It was made in a traditional style, but with all the modern features like shocks, air conditioning and automatic windows. I also liked learning that the crown and scepter have their own coach to ride in durning Royal processions.

The kids favorite part was when they got to dress up in the Royal livery. I got to play the queen when we rode in the carriage. Don’t I look regal? 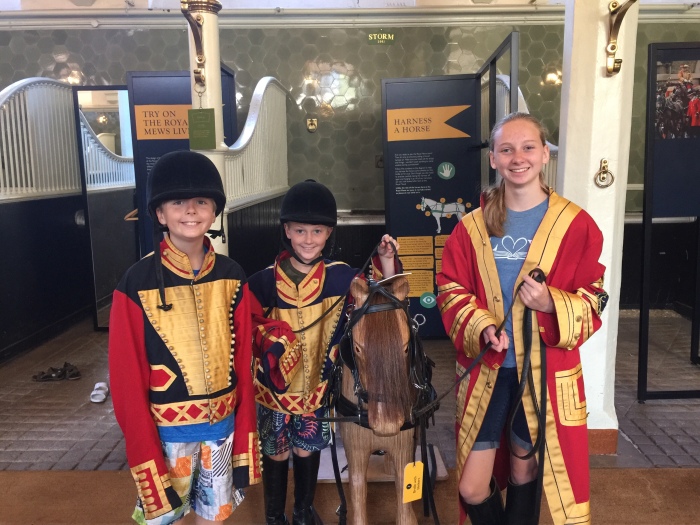 The Gold State Coach was by far the most impressve looking. It is used by kings and queens on their coronation day. But Queen Victoria complained of the “Distressing oscillations” and Queen Elizabeth said it was one of the most uncomfortable rides of her life. I guess that’s what happens when you ride in something build in 1760.

Now on to the Changing of the Guard. It was waaaay more crowded than I expected it to be. Blake hopped up on Rusty’s shoulders and Halle, Josh and I climbed onto a wall in hopes of a better view. It was a pretty impressive spectacle! We almost skipped it, and I’m so glad we didn’t.

Next we climbed the Wellington Arch. Meh. 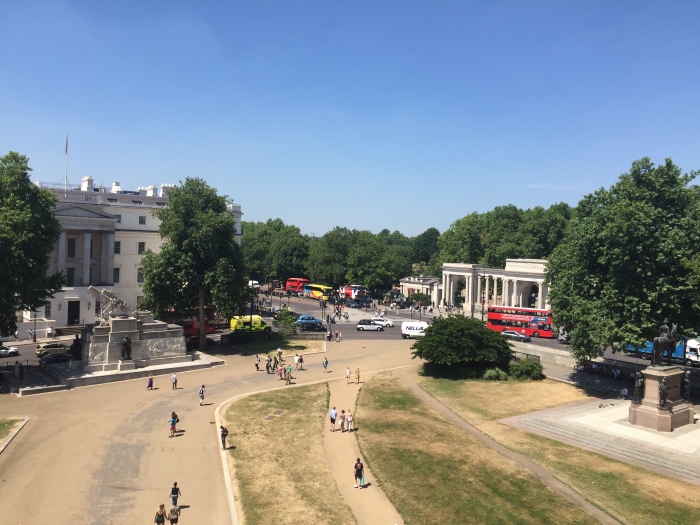 From there we jumped on the Underground and made our way to Borough Market for lunch. The kids got their favorite mac and cheese at Hash and Rusty and I tried some kinds of delicious chicken, beef and cabbage.

We were hot and sticky and ready for the fountains at More London!

They were so fun! And I don’t think there could have been a more picturesque backdrop. Blake was soaked within seconds. The cool water was heaven sent on this scorcher day. 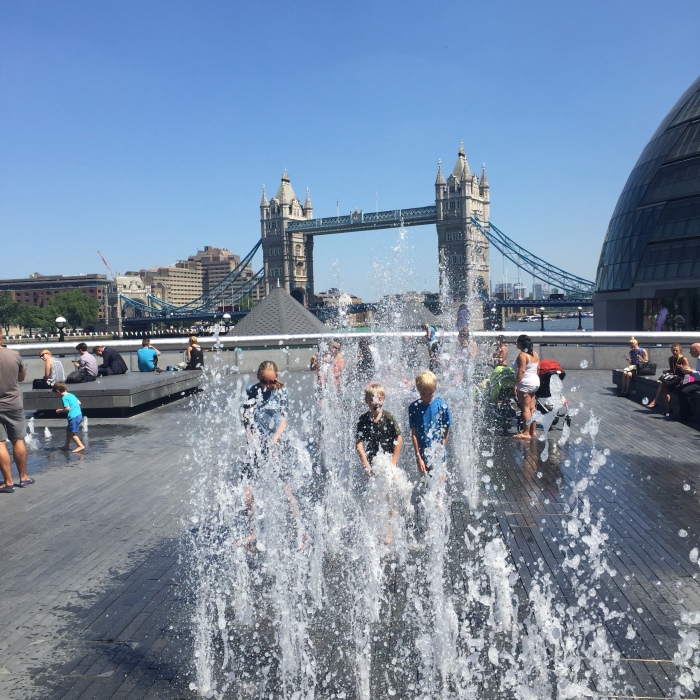 We Franks one raspberry lemonade and ate some strawberries and then we were ready for the HMS Belfast. But first–a killer view of the London skyline.

The HMS Belfast is a famous WWII ship. I liked this a whole lot better than I thought I would! It was fascinating to learn about life at sea during war time. And I’ll tell you what–I’m sure glad it wasn’t me on that ship.

Apparently, Frankenkitty was a beloved Belfast cat,and Halle was so happy to find him sleeping in his hammock.

Just down the road is Tower Bridge and we wanted to climb to the very top and walk over the glass floor. It was really fun! Although, Blake was having none of it. I had to lead him across the floor with his eyes shut tight. 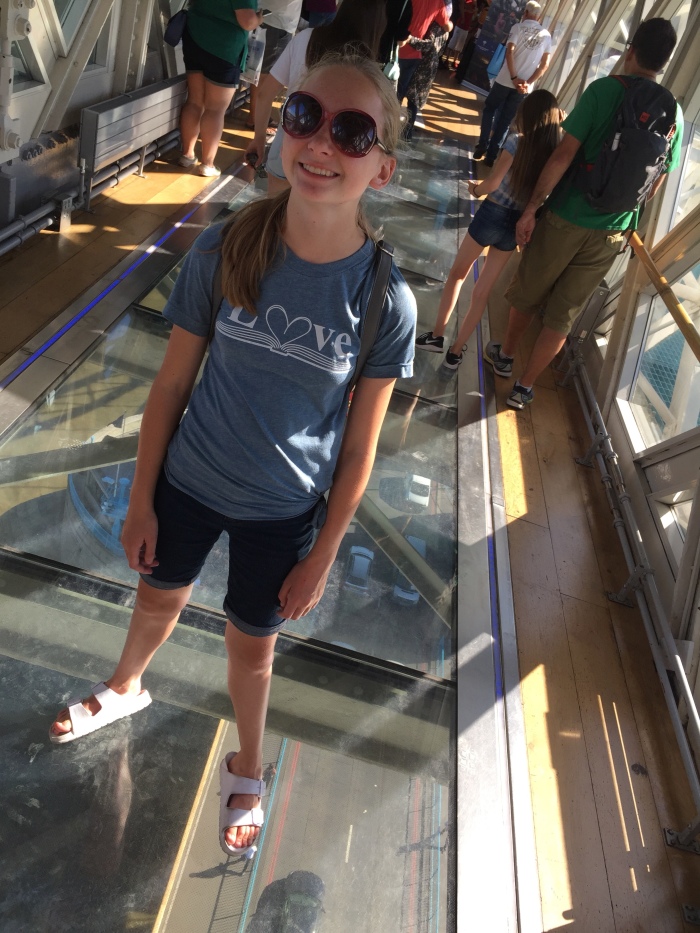 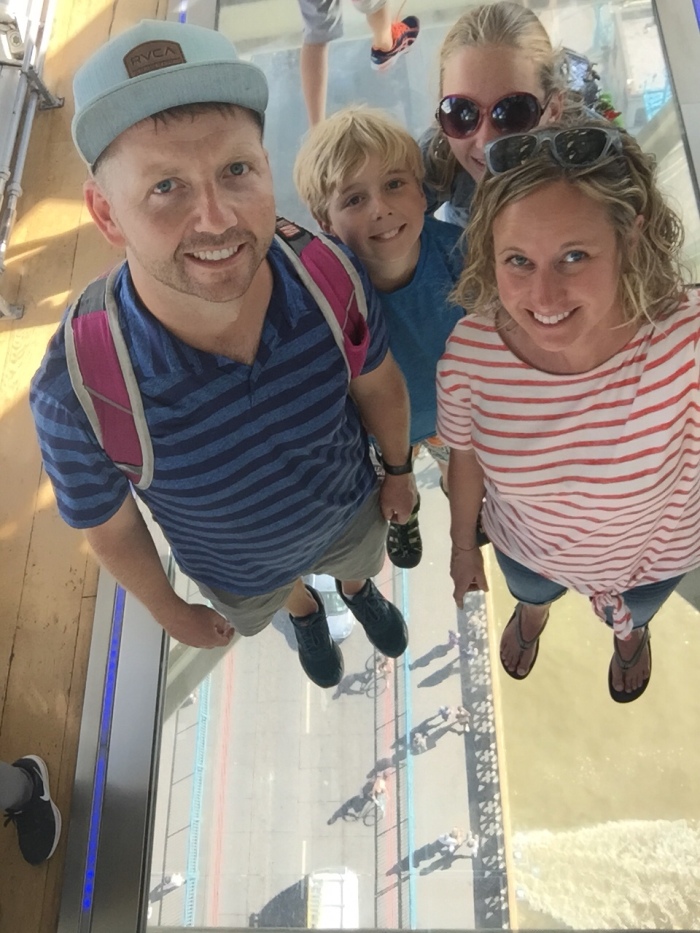 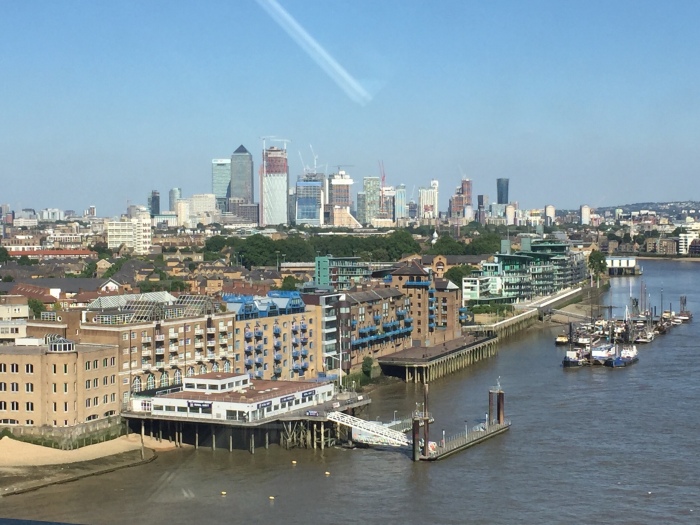 Avis’s the bridge is the Girl with a Dolphin statue. Halle said she wishes she were this girl and it’s one of her dreams to swim with dolphins. I have no doubt she will make that dream come true! 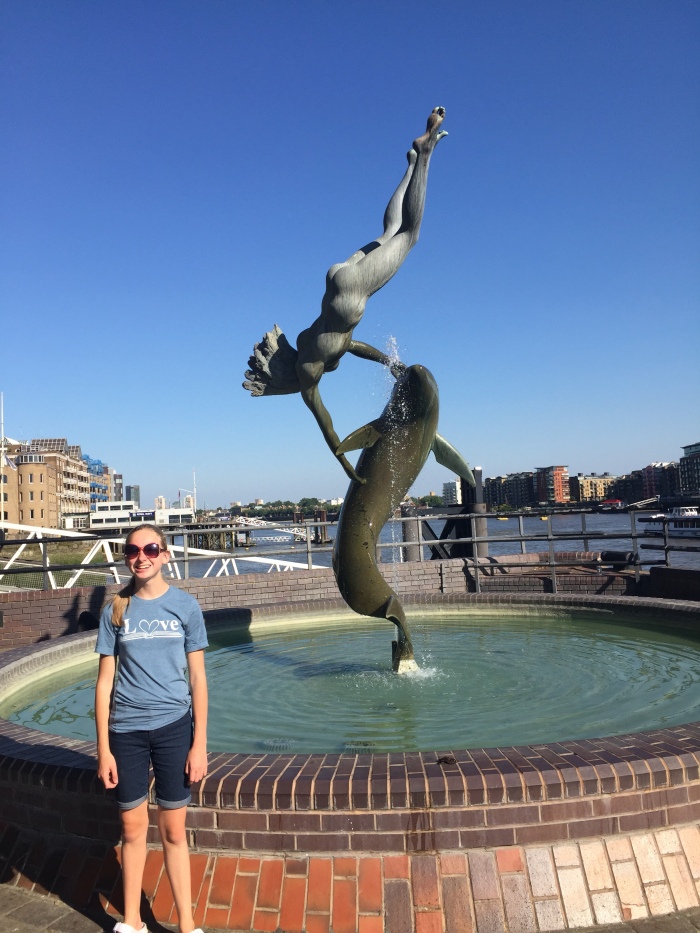 We grabbed a Meal Deal from Tesco and ate it on the street before we did a little Thames river cruise to Westminster. Again, Meh. To both dinner and the cruise 🙂

But, while we were in line to board the boat we saw this. Water fountains in general are a rarity. And cold water almost non existent! 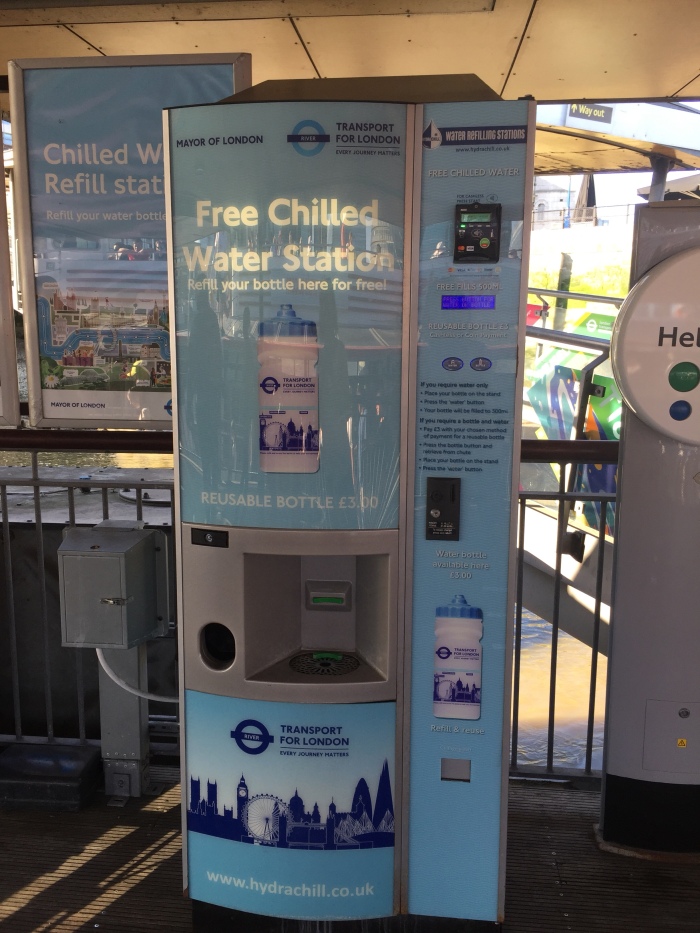 While walking over Westminster Bridge on our way to Waterloo Station we saw about 10 of these games. There were 3 cups and 1 ball and you had to place a bet and then guess which cup the ball was under. We saw people betting £20-£40! It was crazy! And looked kinda fun.