What an absolutely perfect vacation. We couldn’t have asked for anything better.  In June of 2015 Rusty told the kids that he was going to have a very busy 6ish months at work.  It was going to require a lot of sacrifice from our family, but we promised the kids if we could all pitch in and be helpful and understanding that we would definitely be rewarded when things calmed down again.  Little did we know that 6 months was going to turn into about 12 months of calculated chaos as Rusty left TapInfluence.  We actually originally booked this cruise for Thanksgiving week 2015, but ended up canceling because things were so crazy at work and nowhere near resolved. (The kids never knew we booked this cruise, so I was the only one who was disappointed when we had to cancel). So, when Rusty left Tap at the end of June 2016  we knew we wanted to book this cruise again.  We invited the Bohn’s to come with us and we are sure glad we did!  Traveling with friends is so much fun.

We Ubered from Orlando to Port Canaveral and arrived about 12pm.  There were a ton of people in the port terminal, but the check in process went smoothly and quickly.  Before we knew it we were being announced as we stepped aboard the Dream!  This ship is beyond stunning.  It is clean, well though out, spacious, and simply beautiful! 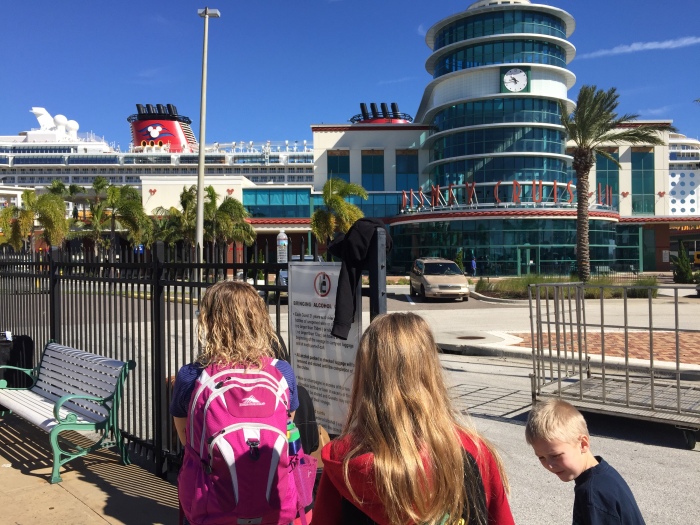 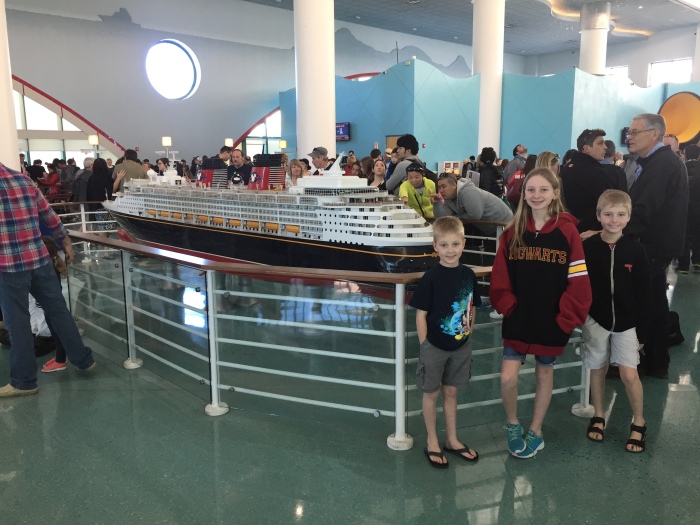 It was sunnier today, but still not warm.  Jackets and pants were definitely still needed for the Sail Away party.  Which is too bad because we were all wearing our fun Micky/Minnie shirts! 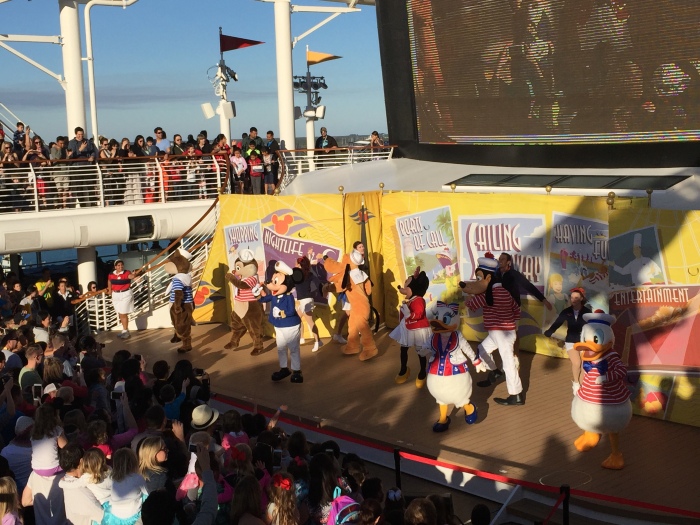 After the Sail Away party our first order of business was to decorate our door and hang up our Fish Extender. 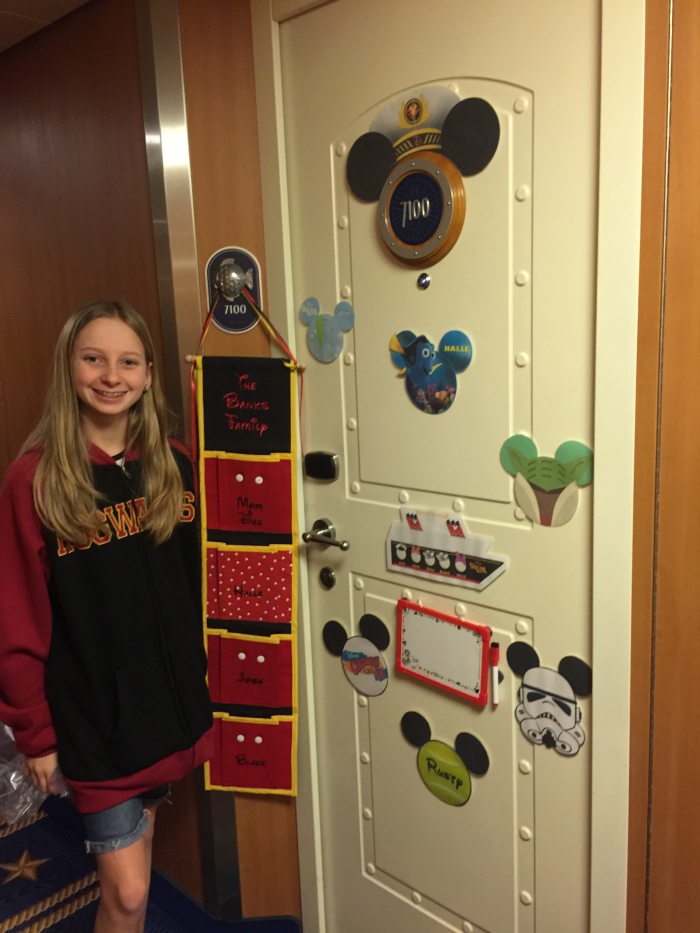 Second order of business?  Ice Cream!  When taking his picture I said, “Josh, I want to document your first ice cream of the trip.”  He got a cute, sneaky look in his eye and started to laugh.  Turns out, this was the SECOND ice cream of the trip.  We’d only been on the boat for like 2 hours! 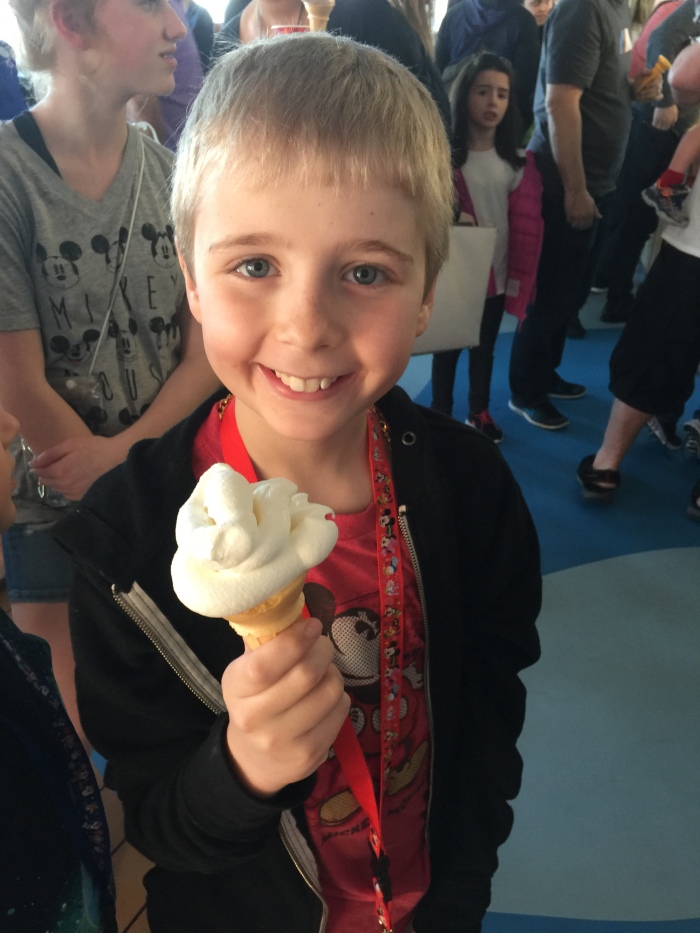 Dinner on the first evening was in Enchanted Gardens.  This was a beautiful restaurant and our view of the sunset from the porthole was incredible.  Definitely the best table of the trip.  I give Disney cruise food a solid, “good.”  Very few things blew me away, but there was always at least one course that was pretty tasty.  And usually one course that was not so tasty. 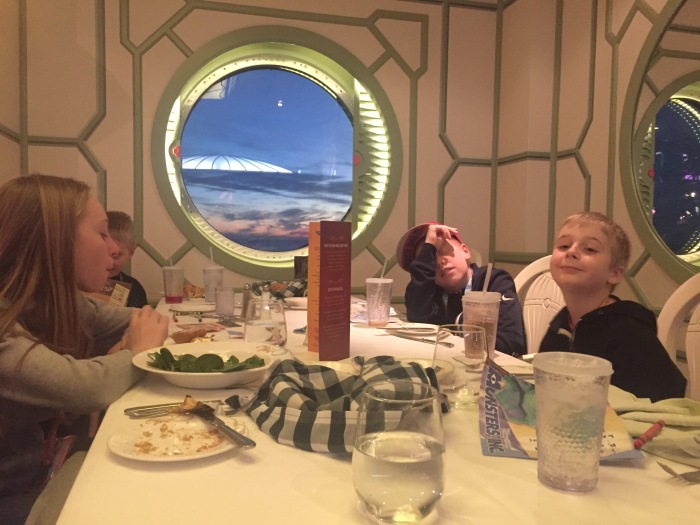 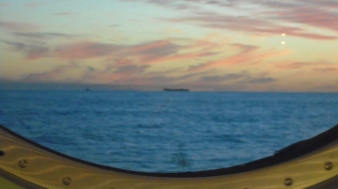 The boys could barely make it through dinner they were so excited to head to the Oceaneer Club/Lab.  Disney does such a great job with their age group.  They had fun playing on the Millennium Falcon, but their favorite thing was the Disney Infinity room.  They could have stayed there all day and all night.  (And, believe me, they tried).

The show that evening was the Golden Mickey’s.  The girls walked the red carpet and got featured on the big screen inside the theater.  They thought that was pretty cool!  Disney advertises their cruise entertainment as “Broadway Style”  shows.  It’s a pretty big stretch to compare it to Broadway, but the show was fun and cute.

After calling room service for cookies, milk, and Mickey Bars, we were ready to hit the hay! 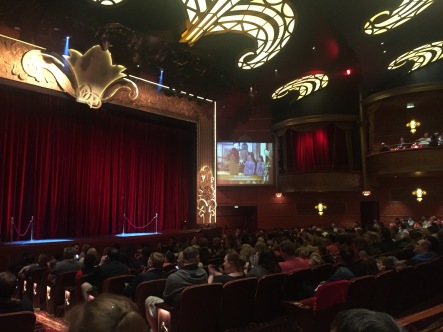 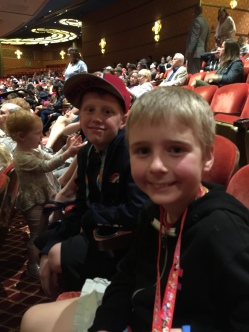 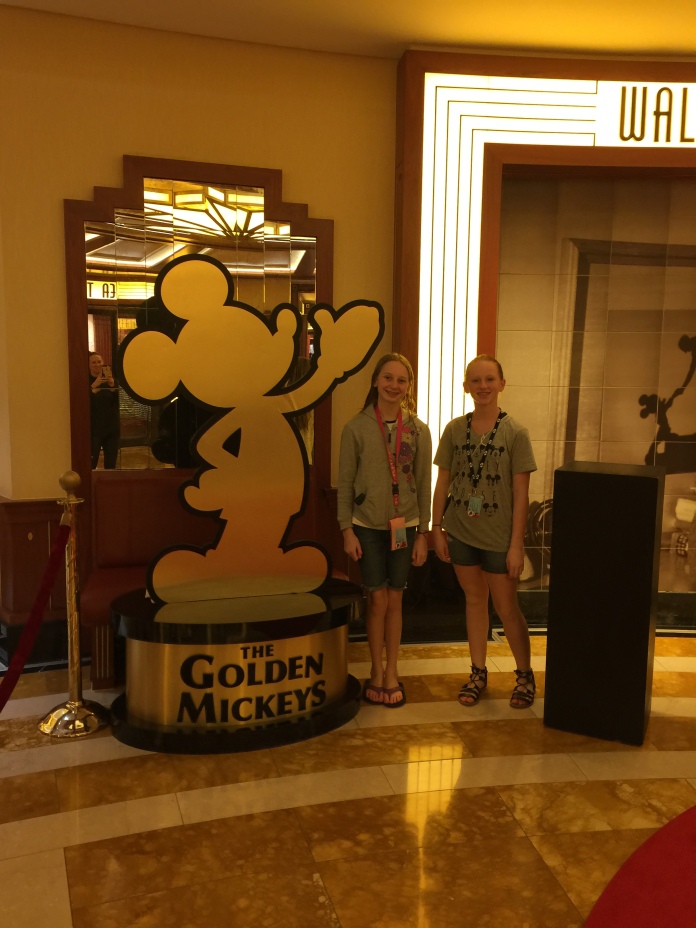 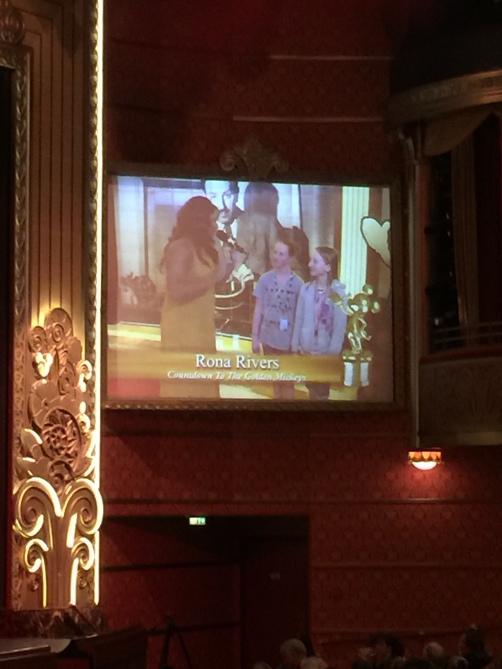