We started our day by dropping Mave and Gwen off at school, and then the four of us went on the Undervelten tour. It was a tour of an underground bunker where people would go during air raids.  Our tour guide was awesome, and we learned so many cool facts about World War 2 and what the after effects were on the people. So many things were destroyed, that people started recycling objects. Helmets became strainers, pots and bowls. Bomb shells became ovens and stoves. There are also 3,000 bombs still left under Berlin, so much so that they have to sweep the area before they build infrastructure! The paint in the bunker is also glow in the dark, and using a very strong flashlight, the tour guide flashed my shadow so we could see just how light it could be. Sadly, no pics allowed on the tour. After the tour, we went to Kaufland one last time to get treats to take home to our boys.  I was swimming in candy!

Then we went to go the girls, and it proceeded to start POURING rain. We had fun running around in the rain, jumping in puddles, and getting soaked. 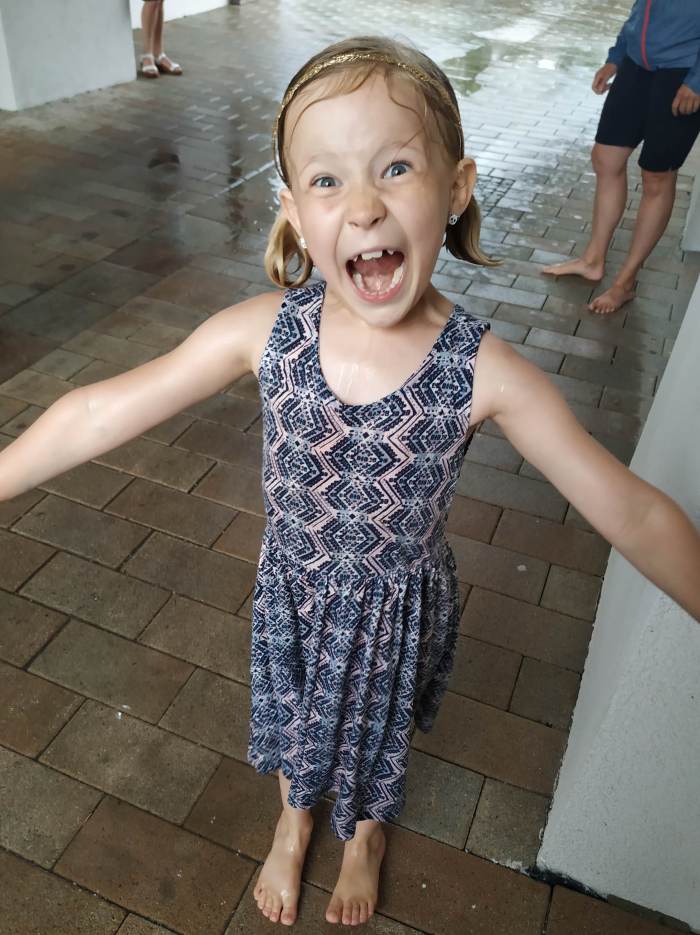 For dinner we decided to try a yummy food hall called Markt Halle Neun. The rain let up just enough that we could go.  On the bus ride there, Gwen taught me a rhyme for the German version of Rock, Paper, Scissors. At the food hall, everybody chose something different, and it was fun to try a little bit of everything. We then got dessert, and Mave and I got Bubble Waffles, Nat and Gwen got ice cream, and Carlie and Tara shared a chimney cake.

In the subway station, there was a mural on the wall with monsters and skeletons. Mave looked at it and said, “that’s really scary. Cause monsters eat people. Not food.” We all thought that was funny. We then called it a night, and said goodbye. Mave was disappointed to find out she could not actually come to America in a suitcase. Me, Gwen, and Mave all slept on the couch, and Nat and Tara slept in the bunk beds. We had such a fun trip and I’m so sad to see it end!