Blake’s journal entry that he pecked out one letter at a time on the iPad:We rented a tesla and drove to the beach and saw Wales and seals.it was fun surprising Dad.we built sand castles.my Dad likes to do rollercoaster. Teslas are cool. 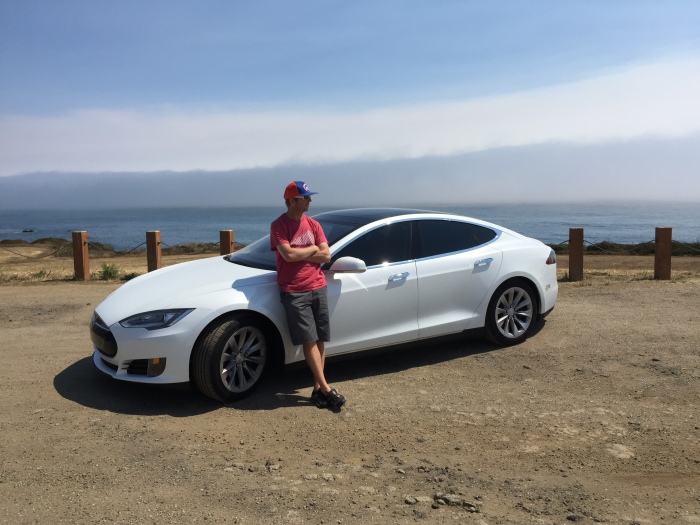 Tuesday I was supposed to work but Tara told me she had a surprise for me and asked me to move my work day.  So I happily obliged.  Josh knew about the surprise and was so excited to be in on the action.  Halle and Blake finally convinced Tara to let them in the night before as well.  I had no clue.  Usually I’m pretty good at guessing.  Tara said it was an early anniversary present.  People were packing outdoor “water play” type things.  I thought we were going sailing.  So we packed all our beach stuff and then we went downtown.  I thought we were going to a sailing school.  Then we walked into a fancy valet garage.  I saw a fancy BMW sitting there and that got my mind spinning.  “Did she rent me a TESLA?”  I was waiting in anticipation but didn’t want to say anything for fear of being wrong. Then the elevator opened and out drove a beautiful white Tesla, a 2016 P90D (all wheel drive).  Her name was Tess.  She was gorgeous. 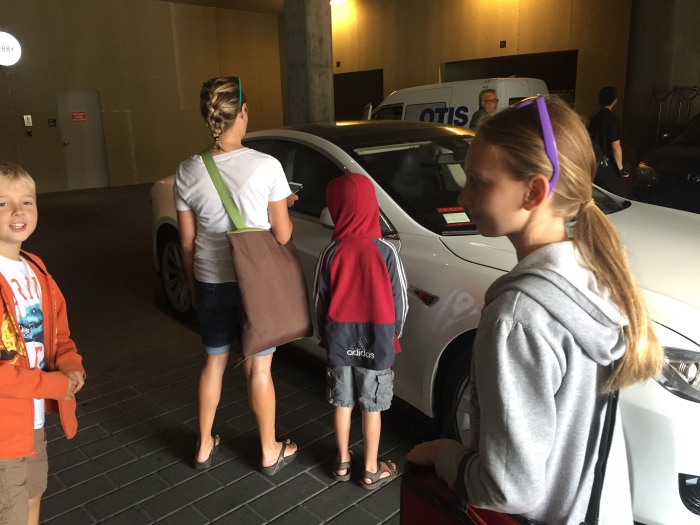 Tara used an app called getaround.com where you literally just rent other peoples cars.  How amazing is she?  It was amazing.  We were going to the beach in a TESLA! They handed the key over with no instruction (they were just valets) and we were off.  Luckily I had sat in ones at the showroom so I had a pretty good idea what I was doing.  We shifted into drive and we were off.  So smooth.  It drove like butter.  I had a huge smile on my face.  Tara is so awesome.  What a fantastic surprise.  She rocks.  We merged onto the 1, the PCH and started heading south.  When the roads opened up we stepped onto the accelerator and were THROWN back against our seats.  The kids squealed with joy and called it a rollercoaster ride.  We did it again and again going from 0 to 60 in about 4 seconds. 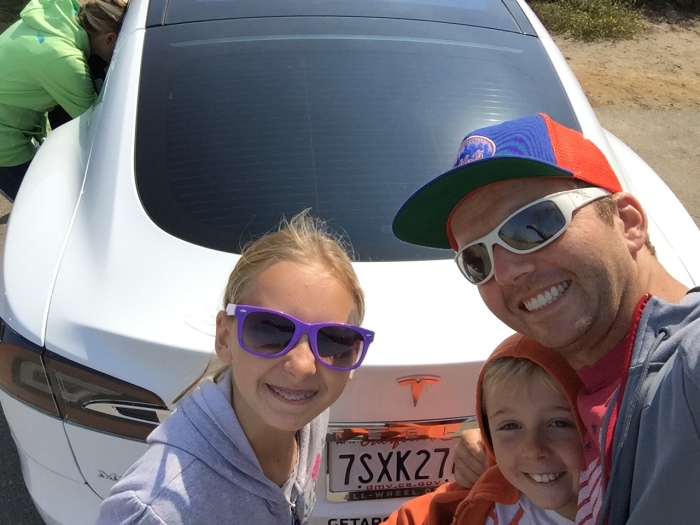 We drove through pacifica and then saw gray whale state beach.  It looked beautiful and deserted.  I asked if we could please stop, Tara said “sure!”.  She was so happy, it was my day.  I just wanted to drive all day but you only get 15 miles for each hour you rent the car.  We stopped at the beach and were treated to a beautiful view and then down some steps to a deserted beach, at least we were the only ones on the beach for quite a while.  The kids played with seaweed and went “fishing” with giant sea bulbs and Tara and I snuggled and talked on the rocks.  It was really really fun. 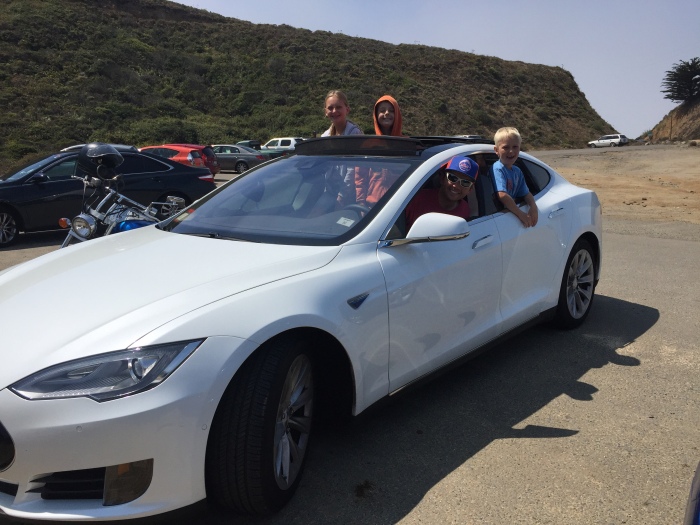 Then we continued the coast drive down to Half moon bay.  Most of the time the coast was foggy but at times it would open up to beautiful vista views.  We pulled into half moon bay and went shopping at Safeway and bought lunch and tons of food for snacks. Josh thought it was pretty cool to put the groceries in the “frunk” 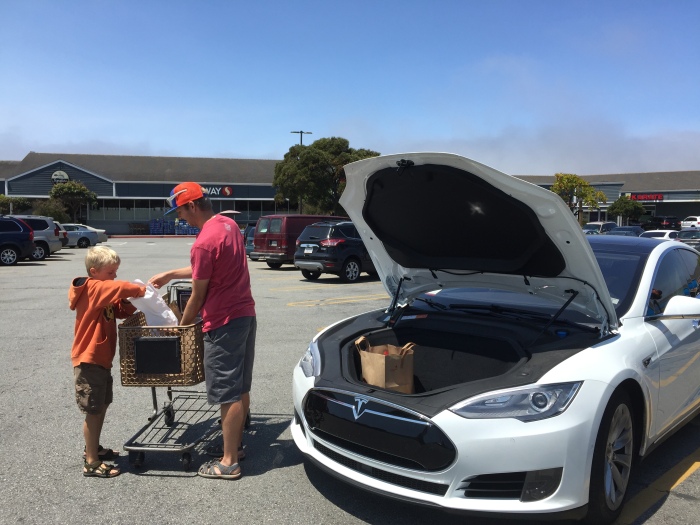 Then we headed to Half moon state beach which turned out to be amazing.  It was kind of foggy and the water was freezing but we saw WHALES!  Multiple whales.  At times we say two jumping.  The birds would circle and then condense as the whales would push the food to the surface and then they would breach and then their backs would be laying in the water.  They were fantastic.  And we saw a sealion just swimming along the beach.  Kids LOVED it.  Pictures don’t do it justice but if you look close, that little black blob in the pic is a whale 🙂 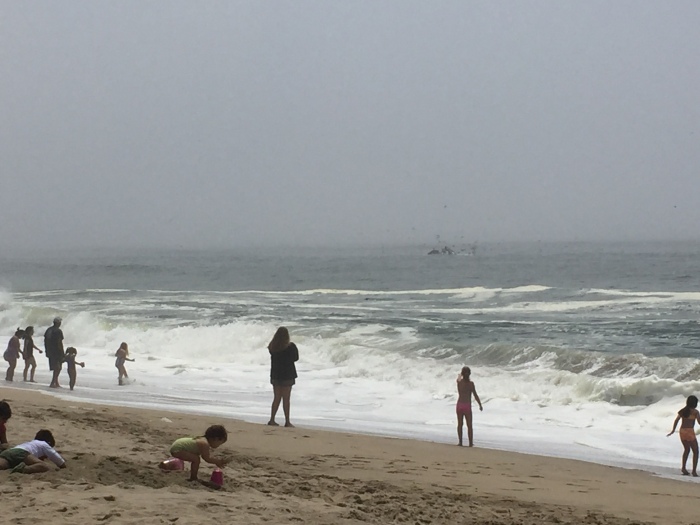 They played for awhile in their normal clothes.  Then they changed and played some more in their swimsuits.  Tara and I just talked while we ate.  We fended off seagulls and then Tara took the food back to the car to avoid being overrun by seagulls.  I took a little nap.  I was woken up by Tara yelling about the first whale. 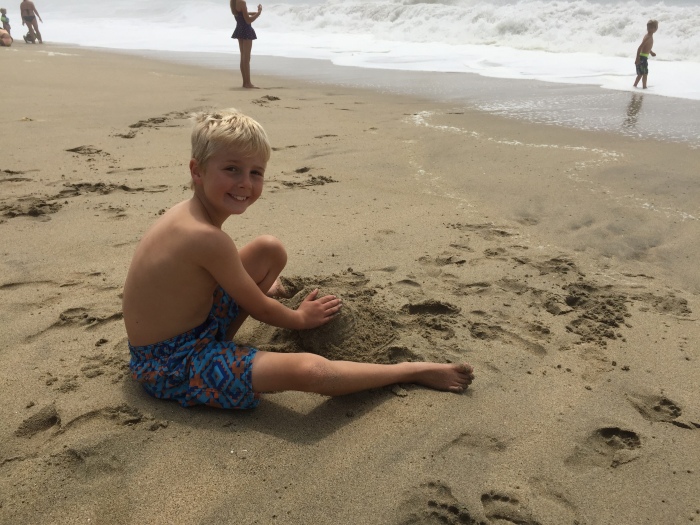 We packed up the car (the kids weren’t happy about it) and continued our cruise down the PCH.  This time we played with the autopilot. It was great, not perfect, still needs some work (it sways in the lane) but was still really good.  I could definitely see times where it would come in very handy. 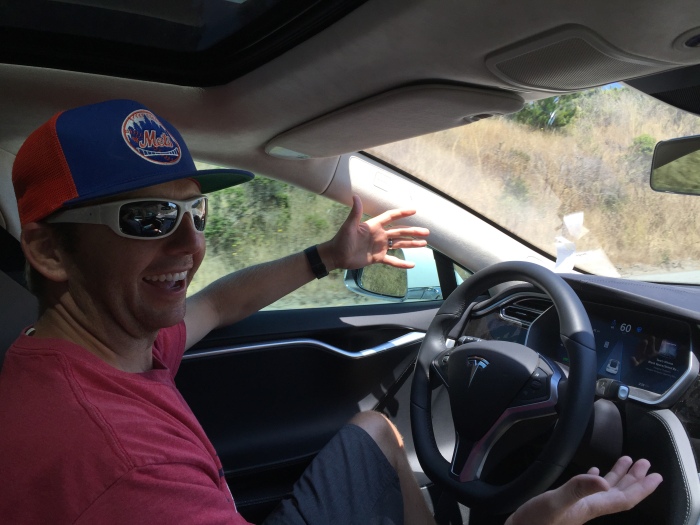 Then we drove to a picturesque lighthouse. 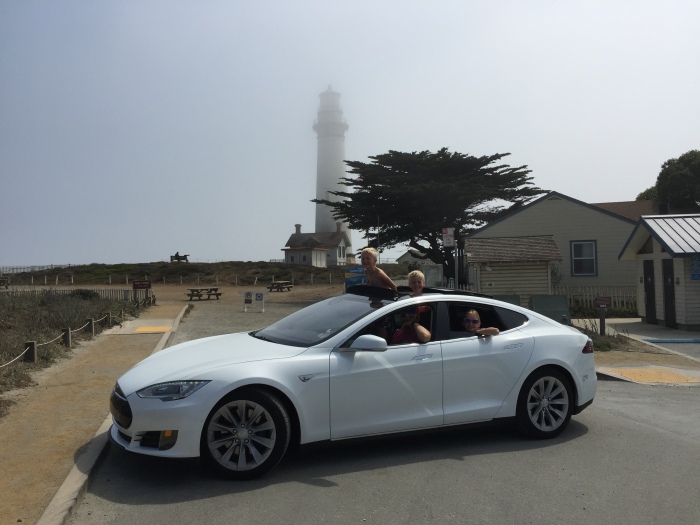 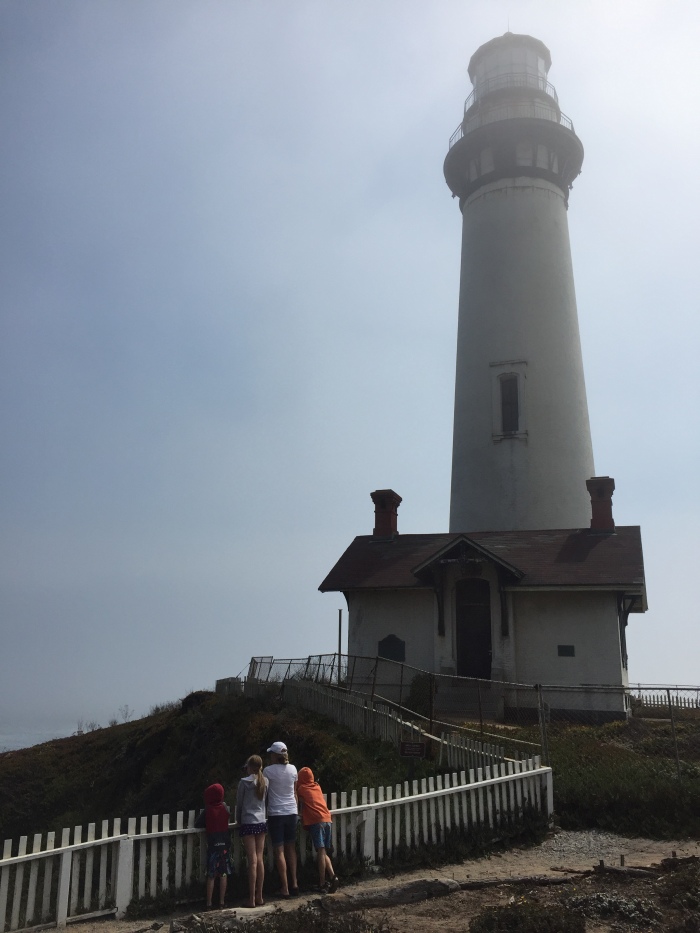 By this time the kids were getting a little stir crazy.  We drove back and cut through half moon bay to the freeway.  On the on ramp we did one last rollercoaster of 0-80 in about 5 seconds.  The kids loved it.  At the end we got stuck in traffic and the kids were getting ornery.  It took us 20 minutes to go the last half mile.  At the end of the day when you are stuck in traffic it doesn’t matter what kind of car you are in, it is still miserable!  We turned the car in.  Tried to get the sand out.  Made the long sad walk home on the boring BART to a TESLA free existence.  It was still amazing and I’m so glad Tara did that.  She is so thoughtful.