As this was a work trip, I didn’t see much of Rusty.  But no fear, I managed to entertain myself just fine :). On Sunday, we did get a few hours of fun after our flight landed around 5.  We ate and Mad Square Eats and tried a little bit of everything.  Arancini balls from Arancini Bros, ( The best one being Nutella filled and rolled in cinnamon sugar) , A chicken curry Empanana from La Sonrisa, pizza from Roberta’s, and an amazing grain bowl filled with BBQ pork, brown rice, carrots, and pickled cucumber salad from Mayhem and Stout. 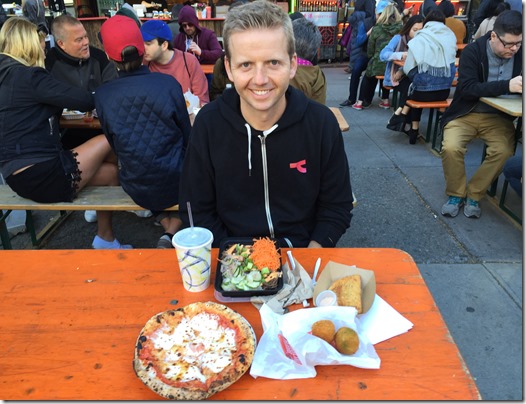 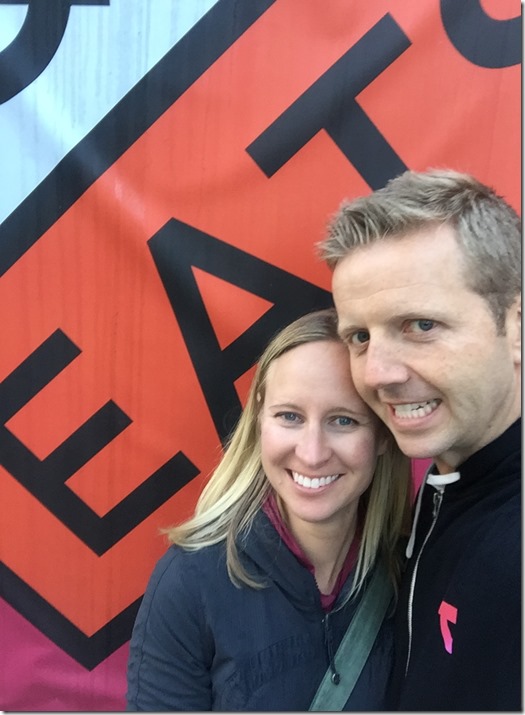 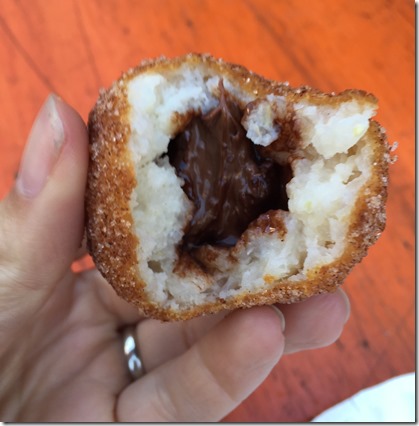 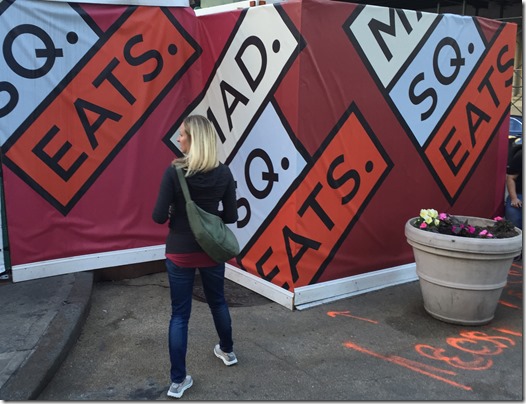 On our walk back from Trinity Church after visiting A. Ham,  we were right near WTC 1.  Rusty decided he wanted to go to the top so off we went.  It was beautiful to watch the sun set over this marvelous city.  No matter how many times I take in the skyline it never gets old. 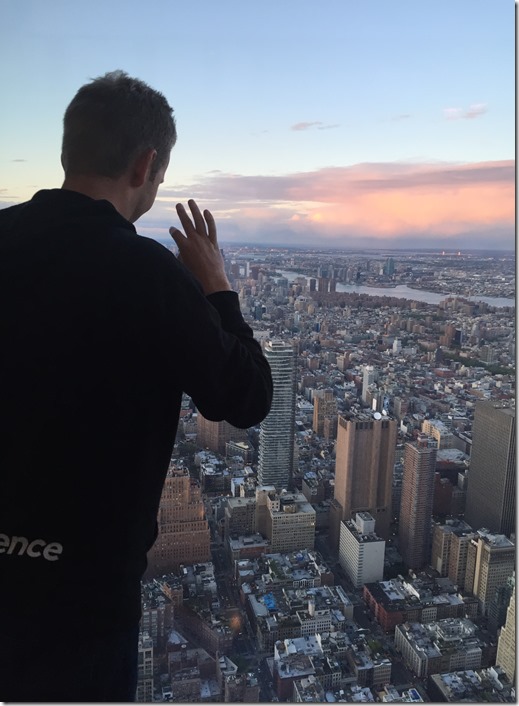 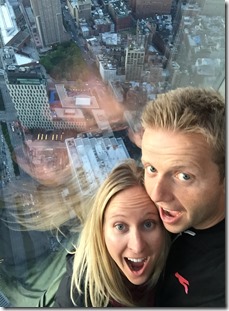 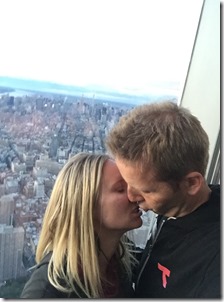 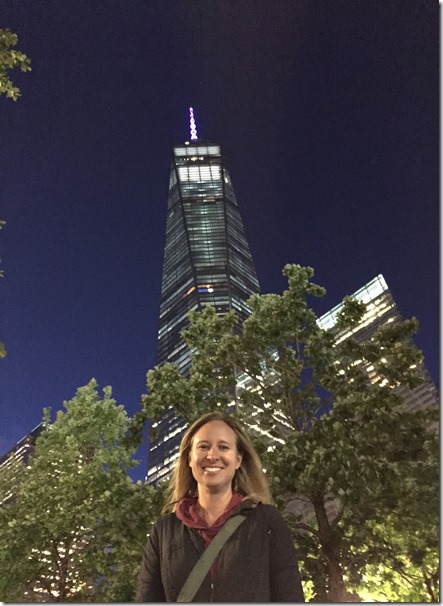 The next day I made my way over to Williamsburg in search of the famous rainbow bagels.  These things look cool, but taste GROSS.  Like not even edible.  Oh well…win some lose some. 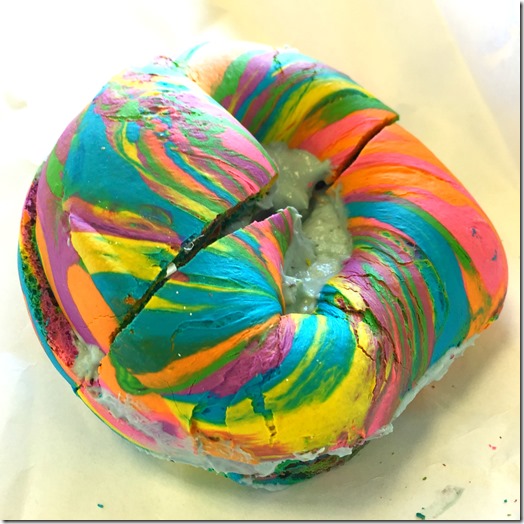 Next up, a tour of Mast Brothers Chocolate which is a bean to bar chocolate operation run by two brothers who are making quite the name for themselves.  On the tour we got to try a cacao seed straight from the pod, taste chocolate in every stage of production, and then sample many, many of the finished products.  I learned a ton!  We even got to try chocolate beer (non alcoholic, of course.). It really didn’t taste very good, but it was interesting to try.  No pictures were allowed on the tour, so you’ll just have to imagine all the cool things I saw 🙂 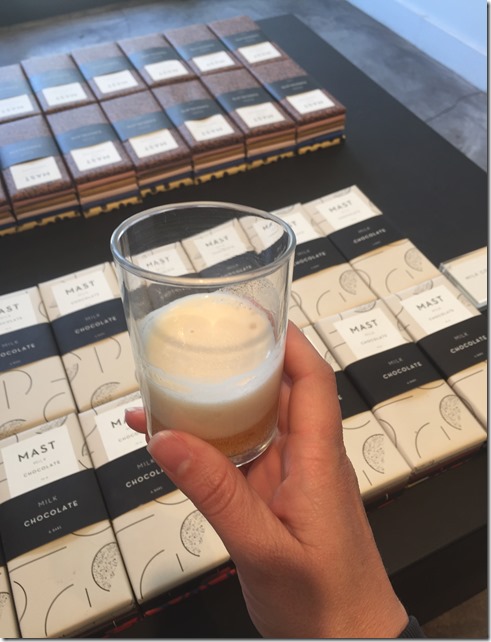 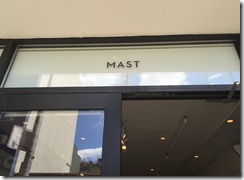 I had texted Madison the day before to see if she wanted to meet up for lunch.  She suggested Sweetgreen, which was an amazing choice!  Fresh, innovative salads totally hit the spot.  We got our food to go and walked over to a playground so Charley and Bergen could play while we ate and chatted.  It was so fun to see her. 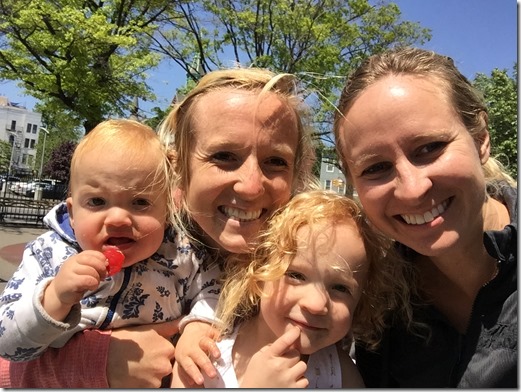 She suggested I take a self guided graffiti tour of the neighborhood and sent me a blog link with a map.  It was the perfect suggestion and I had a ton of fun.  Graffiti is so cool.

“Imagine a city where graffiti wasn’t illegal, a city where everybody could draw whatever they liked.  Where every street was awash with a million coulours and little phrases.  Where standing at a bus stop was never boring.  A city that felt tlike a part where everyone was invited, not just the estate agents and the barons of big business.  Imagine a city like that and stop leaning against the wall – it’s wet.”  –Banksy 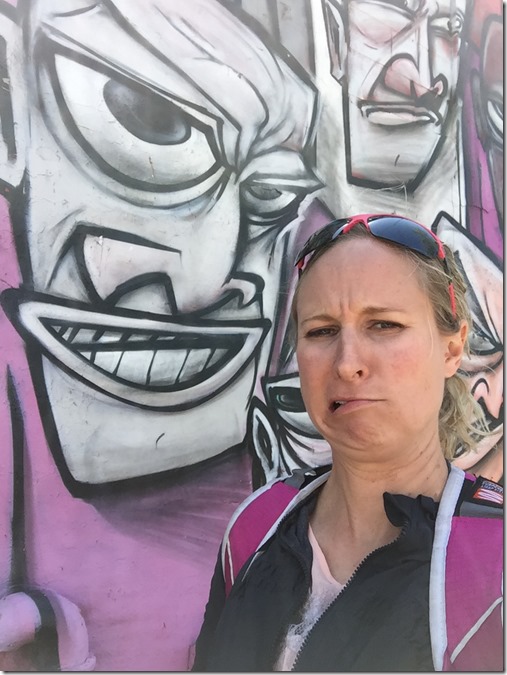 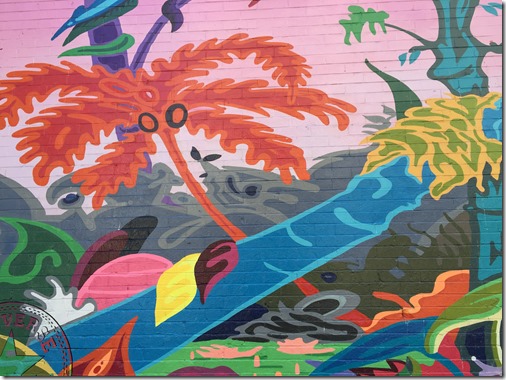 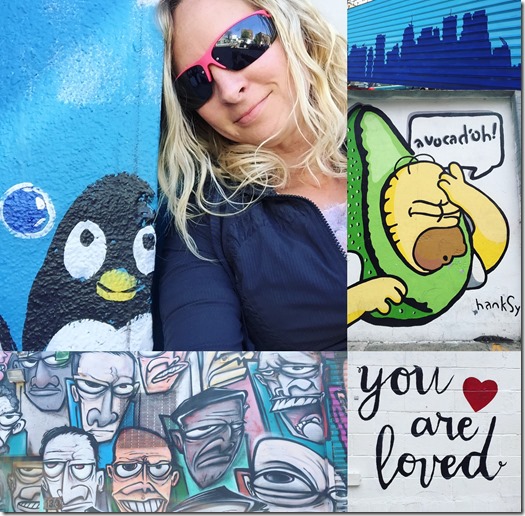 (And obviously, the Simpsons grafitti is not a real Banksy)

I was going to walk back to Manhattan across the Williamsburg bridge but my feet were getting kinda tired so I rented a city bike instead.  It was beautiful to bike across the bridge, but it was a hassle to find a docking station for the bike at the end. 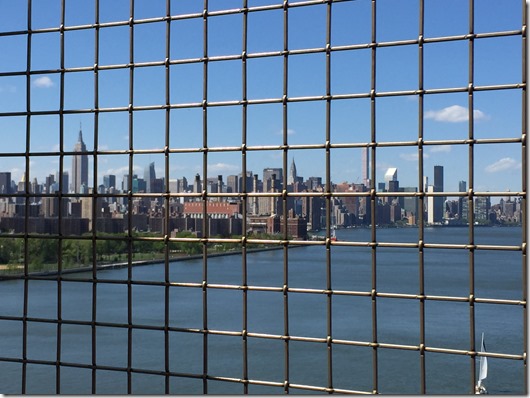 The next day I woke up in a post Hamilton fog, and Rusty could only drag me out of bed by dangling Bethesda Fountain in front of me.  So run we did. Don’t mind my incredibly tired eyes. 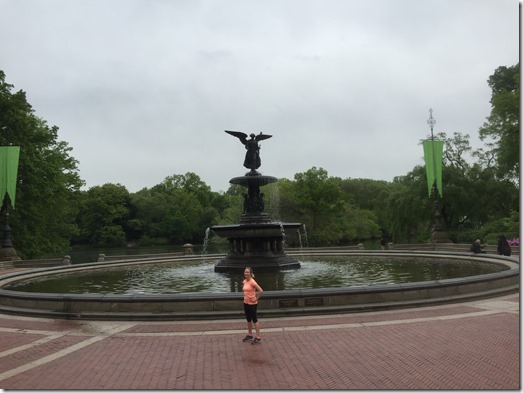 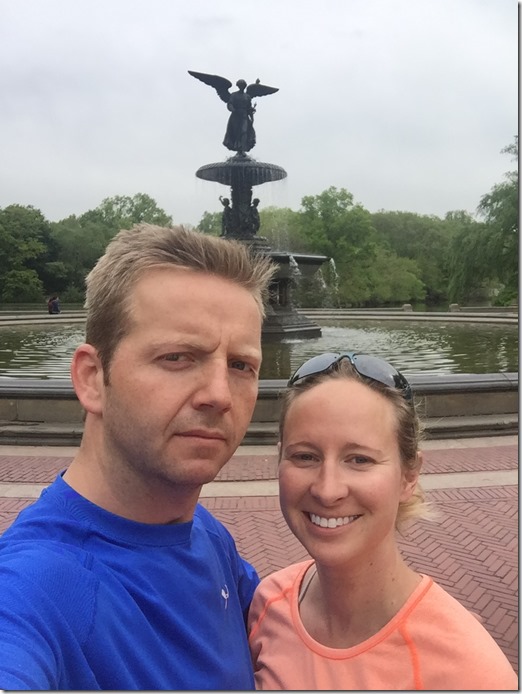 Later in the morning I went to the Tenement Museum, which I have been wanting to do for a very long time.  My tour focused on the Irish Immigrants.  What brought them to America, how they were treated (poorly) and the conditions in which they lived (even more poorly). Tenement housing was a term that was used to describe housing with zero amenities.  No running water, no sewer, and only one window per apartment.  Apartments were tiny and consisted of 3 rooms.  A living room, kitchen and bedroom.  Often times 10-16 people were living in each little apartment.  There were 4 apartments on a floor, and 5 floors per building.  It must have been so awful for them.  No pics allowed on this tour either.

For lunch I went on a Lower East Side Foodie tour by Free Tours by Foot.  The tour is free, you pay for your own food and get whatever you’d like and then tip the guide at your digression at the end.  It was super fun and I’d recommend it to anyone.  This is one time I really wished Rusty was with me so I could have tried more food.

Nothing really blew me away, but everything was fun and delicious and I tried a few new foods I’ve never had before.  We started with Knish’s from Yonah Schimmel’s.

Then I had a shot of chocolate chip cookie dough butterscotch pudding from Sweet Sugar Sunshine. 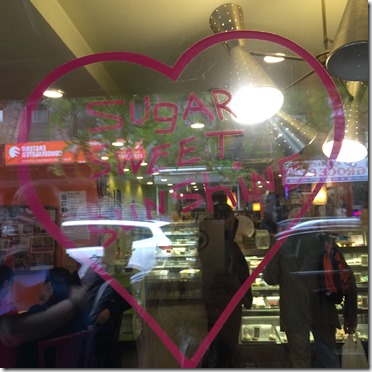 I tried pickled pineapple from The Pickle Guys (which was actually quite tasty) and Dumplings from a place where the sign was only in Chinese.  The dumplings were my favorite.  So very delicious. 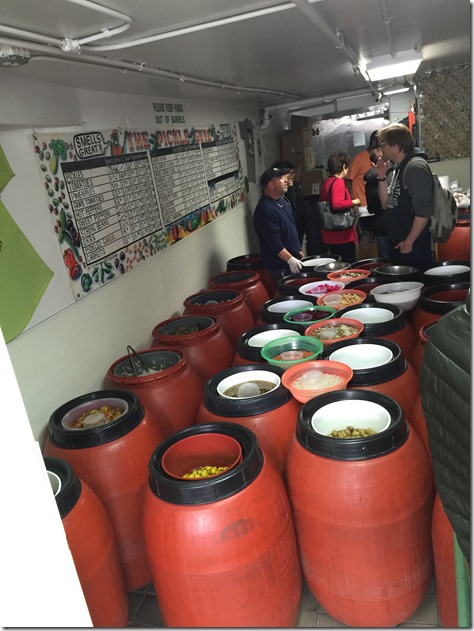 Who can’t love a city where this exists?  Itty bitty room filled with vats of pickled products.

I also tried a Bialy, which is like a flat bagel with lox and cream cheese. 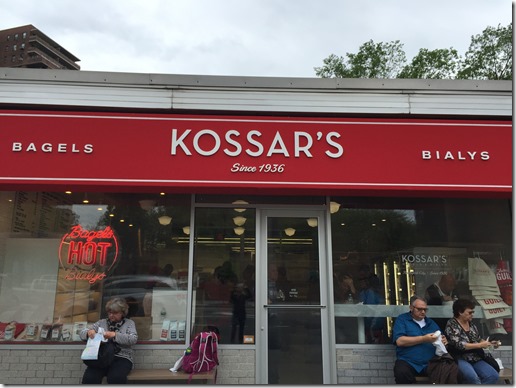 We ended the tour with doughnuts from the Doughnut Plant.  They use fresh fruits in their filling and glazes.  I tried the Spring flavor, which was a mango glaze. 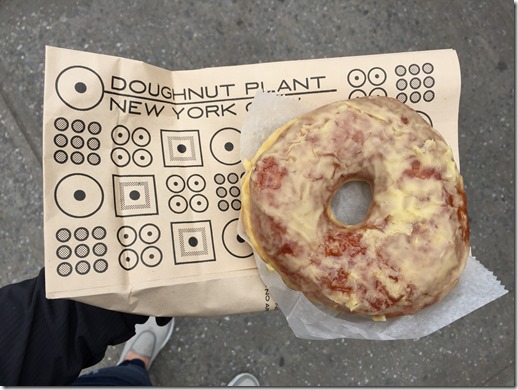 In case anyone is wondering, yes, my stomach magically grows to about 4 times its normal size when I’m in NYC.

After a quick stop in Chinatown to look for sunglasses were I confirmed, once again, that I hate Chinatown, I headed back to the hotel.  Later, when Rusty was done with his meetings we went to Ippudo which has 8100 reviews on Yelp.  It didn’t disappoint.  We both agreed that our favorite was the vegetable Hirata buns.  Delicious.  The Ramen was also outstanding and we walked away very satisfied with our choice.  The restaurant was in a hip little space in the East Village.  Most the tables were communal style and the kitchen was open. 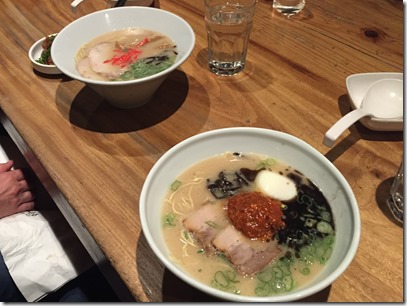 I can never leave New York without trying the Cronut of the month.  It was Brown Sugar Rhubarb w/ Lemon Thyme Sugar.

When I read the flavors I’m never sure I’m going to like them.  But then I take a bite and I’m sold!  Dominique Ansel is a pastry god.  Even though this wasn’t my very favorite flavor it was still hard to for me not to eat Rusty’s cronut. 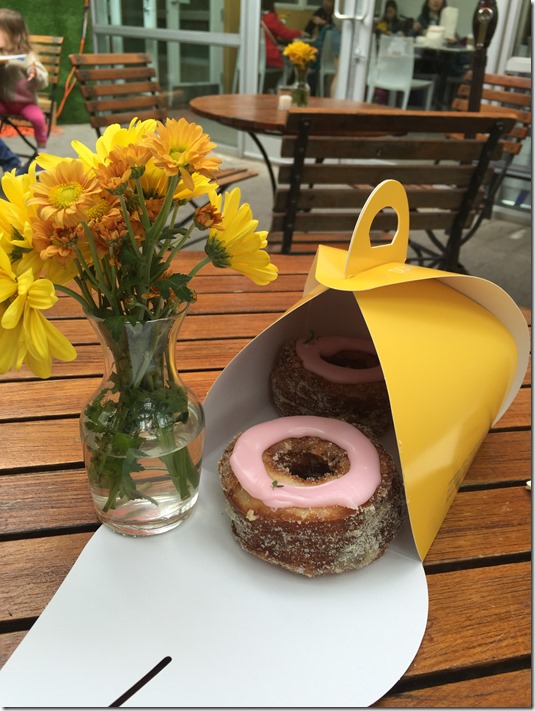 After I went to the Ham 4 Ham show that afternoon, I hopped over to Urban Vanderbilt for lunch.  I just love food halls.  They are my favorite. 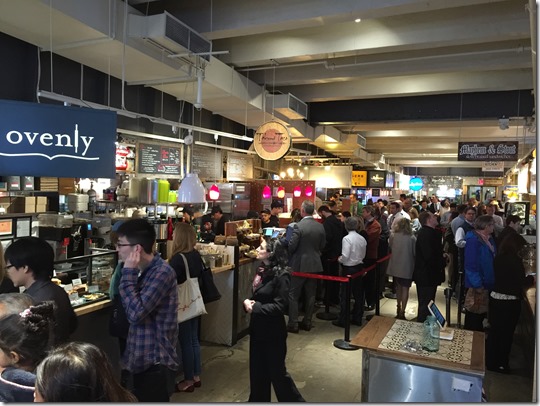 I got a chicken sandwich from Delaney’s Chicken and a salted caramel dark chocolate brownie from Ovenly.  I took my brownie up to enjoy in Central Park.  I was sitting on a park bench texting my mom and the brownie was sitting next to me.  Something nudged my side and I looked down to see a raccoon swiping my brownie!  He grabbed the whole thing and settled under the bench to devour it.  That little stinker! 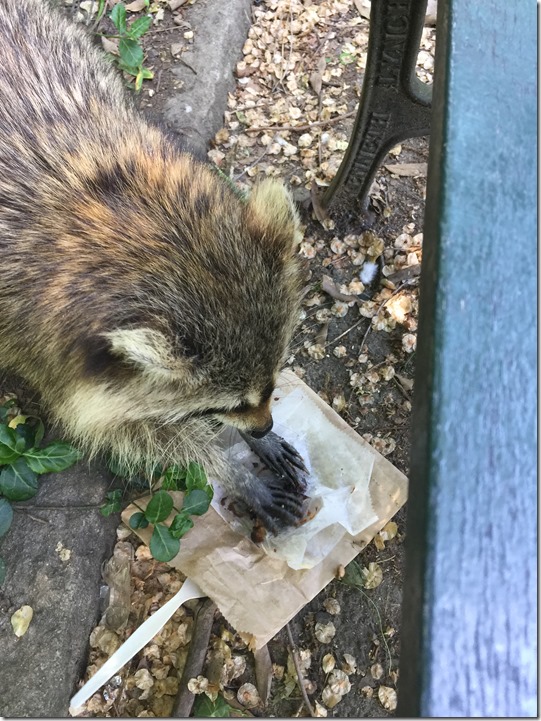 Well, the brownie wasn’t enough for him and he went after my backpack.  I think he could smell the cookies inside that I was bringing home for the kids.  He drew quite the crowd and I couldn’t stop laughing. 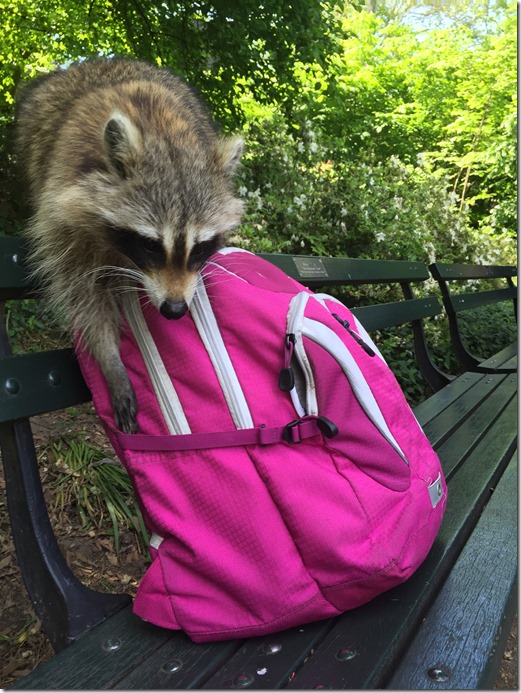 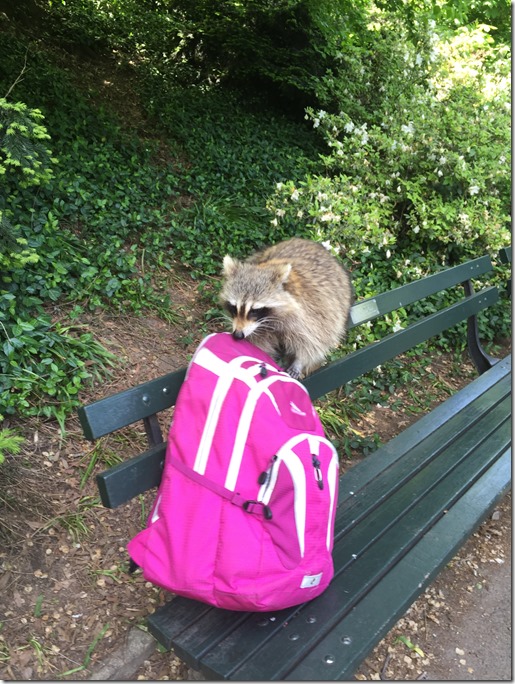 NYC, once again you’ve totally exceeded my expectations.  See you when we toe the marathon start line in Nov!

One thought on “The Rest of NYC”