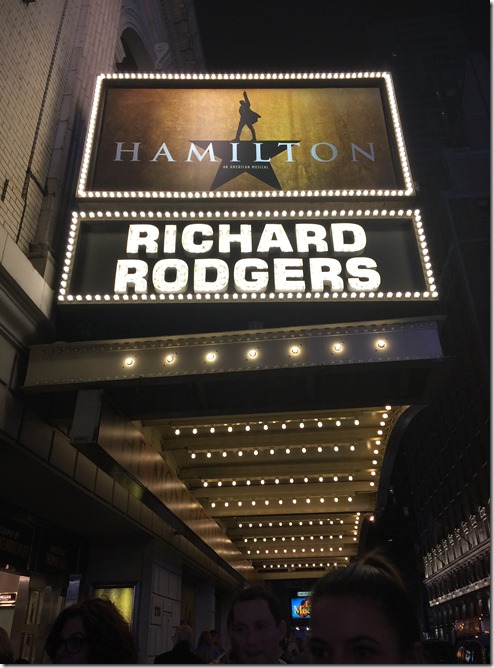 Our trip to NYC was all about Hamilton, Broadway’s hottest hit. We’ve been listening to the music for months and Rusty also bought me the lyrics book that’s annotated by Lin-Manuel Miranda, which we’ve both been pouring over.  Tickets are sold out until Jan of next year and so we’ve been watching the secondary markets closely.  But, sadly, tickets were WAAAAAY out of our price range.  We didn’t schedule any evening plans and decided to put all our luck into winning the lottery.  Every performance they sell 21 tickets for $10.  They call it #HAM4HAM.  Trade one Hamilton ($10 bill) for another (Ticket to the show).  But…almost 10,000 people enter each day so we knew our odds were slim.

After arriving Sunday afternoon and eating dinner at Madison Square Eats we decided to stroll down to pay our respects at Trinity church where Alexander and Eliza are buried.  The grounds were closed for the evening, but due to the magic of the internet, we were able to locate Hamilton’s grave and see it from the street. 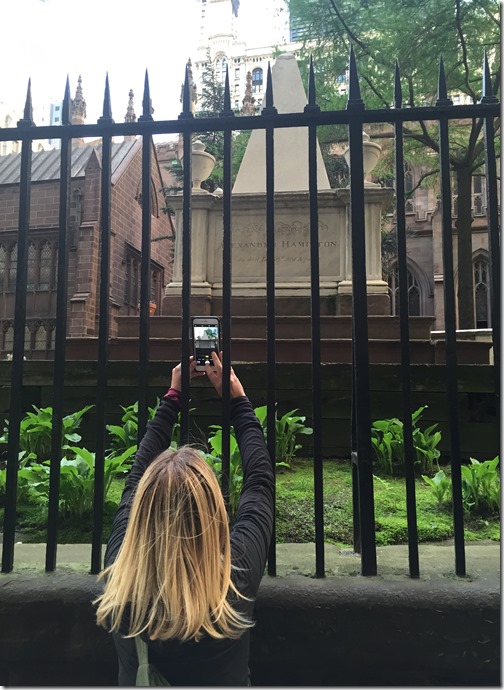 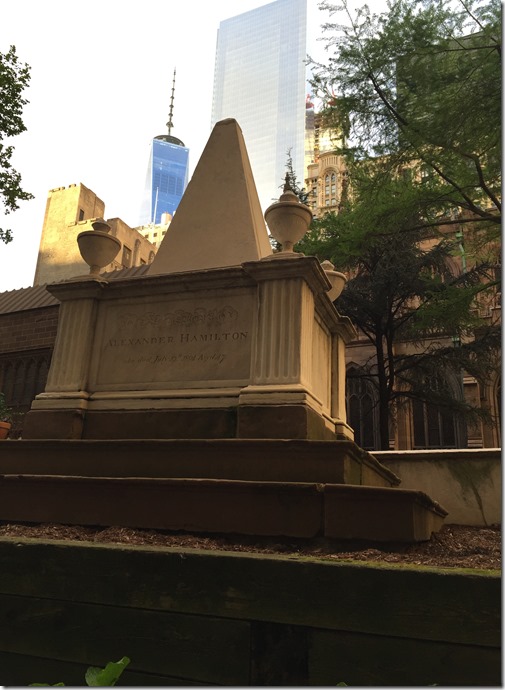 Please oh please let us see your magnificent, marvelous show.  I have the honor to be,

The next morning we also stopped for a photo opp at his statue during our run in Central Park. 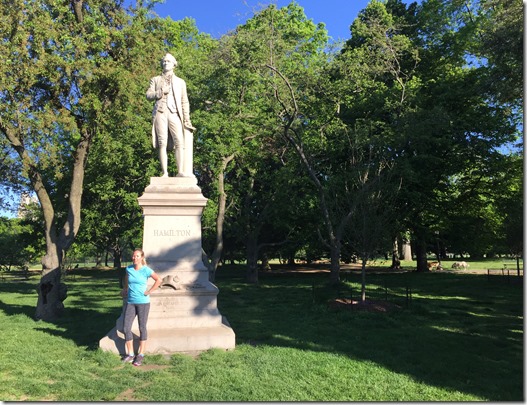 Well…..praying at Hamilton’s grave and visiting his statue didn’t work.  We were not picked in the Monday evening lottery.  We decided we’d go down to the theater anyway and scope out the scene. I met Rusty there after his last meeting had ended for the day. I had heard that sometimes people have a +1 that can’t come and they will sell off the extra ticket.  No luck there either.  No one was willing to part with their golden ticket.  We had also been watching StubHub to see if secondary ticket prices would drop close to show time.  We watched throughout the day as all the tickets got scooped up.  At 6:45, 15 minutes before show time, there was ONE ticket left.  And it was still out of our price range, but it was dropping in price every few minutes. 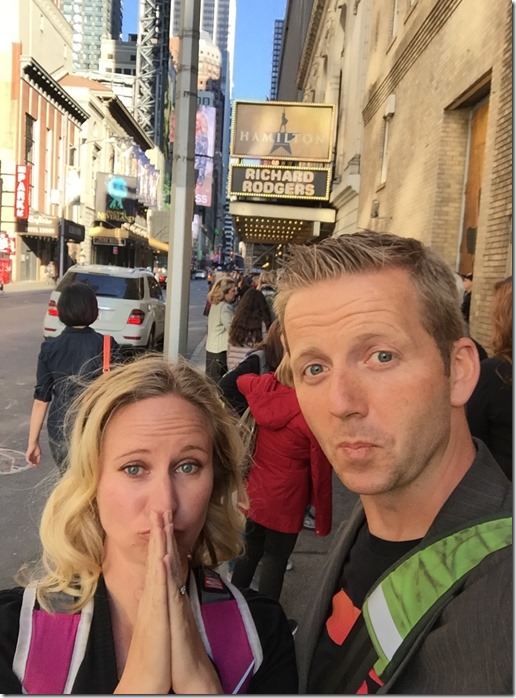 We were refreshing the page about every 15 seconds.  At 6:50 it dropped by a significant amount and Rusty scooped it up in about 10 seconds flat. I kept saying, “Are we really doing this?  Is this really happening?”  We ran to Will Call and showed them the ticket.  But, they wouldn’t print it for us, and they wouldn’t accept the electronic version.  They gave us the name of a deli at the end of the block and said that sometimes they’d print tickets for $10.  We ran as fast as we could.  6 minutes till show time.  The man behind the counter called his boss to ask if we could print.  DENIED.  But he told us there was a Staples 2 blocks away.  4 minutes to show time.  Rusty ran as fast as he could and I made my way to the Marquis Hotel which is right next door to the theater to see if perhaps I could print in their business center.  I got a text from Rusty.  “I have the ticket.  RUN!”  I ran through the hotel, out the door, around the corner to the entrance of the Richard Rogers.  Rusty was waiting there with ticket in hand.  I was the last person in the theater.  I heard the opening song begin as I was sprinting up 2 flights of VERY STEEP stairs.  I slipped into my seat just as Lin walked on stage for his opening line.  “Alexander Hamilton, my name is Alexander Hamilton.  There’s a million things I haven’t done, just you wait.”  The audience erupted in massive cheering and we were all entranced from that moment forward.  I texted Rusty at intermission and asked him if he wanted me to call him on speaker phone and leave it going for Act 2.  He was tempted but didn’t want to run any risk of getting in trouble 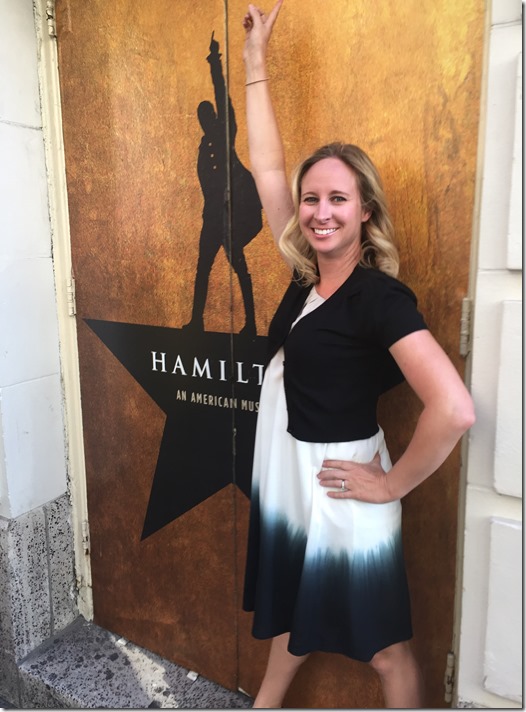 It was so much fun.  Total dream come true. Every minute was pure magic.  Rusty met me at the theater when it was over.  We were just hanging around snapping a few pictures when we saw Phillipa Soo (Eliza) slip out a side door.  She had a hat on and her cell phone to her ear.  Rusty managed to catch a picture while I rummaged around my bag for a pen.  By the time I found one she had slipped away into the crowded streets. 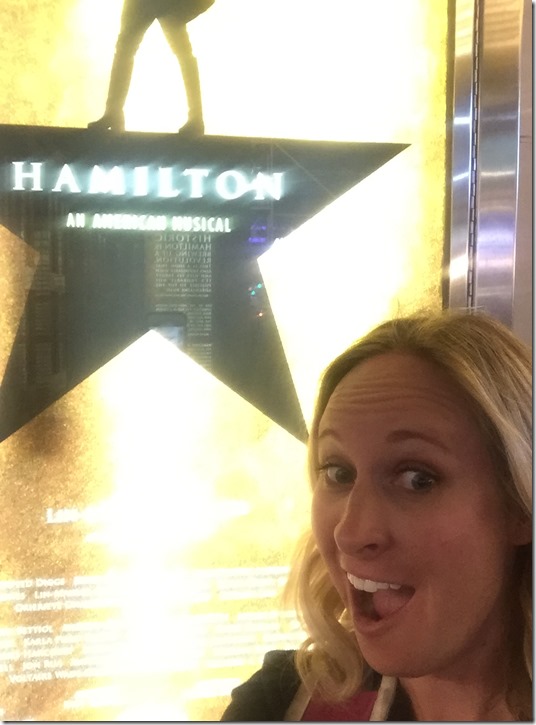 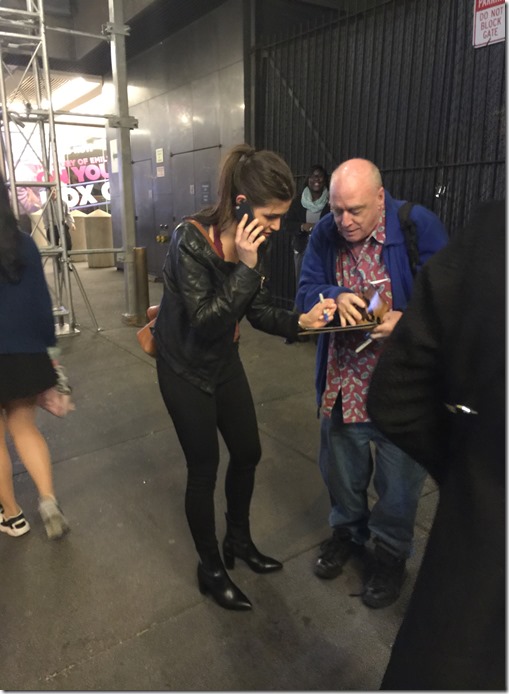 Rusty had arrived at the theater a few minutes ahead of me before the show and he saw Daveed Diggs (the Marquis de Lafayette and Thomas Jefferson).  I NEVER see anyone famous when I’m in NYC, so to see TWO cast members was so awesome. 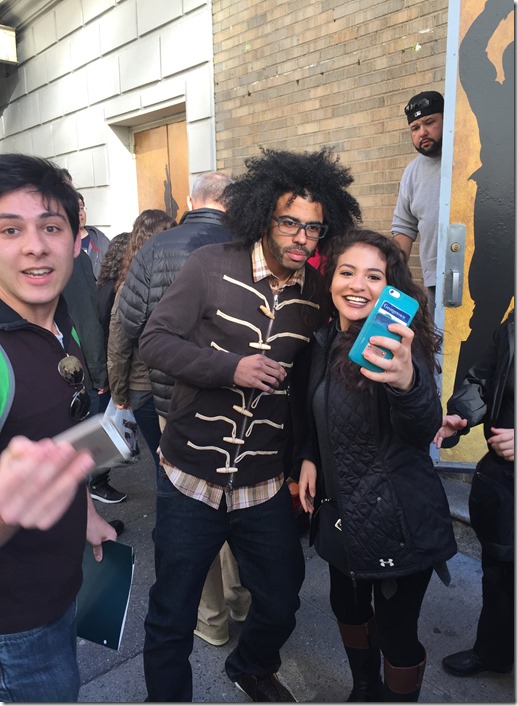 But the Hamilton fun didn’t end there. For the Wed Matinee they hold a live lottery.  You must be there in person to win.  We were flying out in the early evening so I didn’t enter the lottery, but Lin also hosts a 5 minute little show where cast members or other Broadway Stars perform.  So, I went to watch the show.  And who should perform but Patti LuPone!  She sang, “give my regards to Broadway.”  It was so so much fun.  The hype around this show is CRAZY.  The line to just put your name in the lottery was probably 5 blocks long. 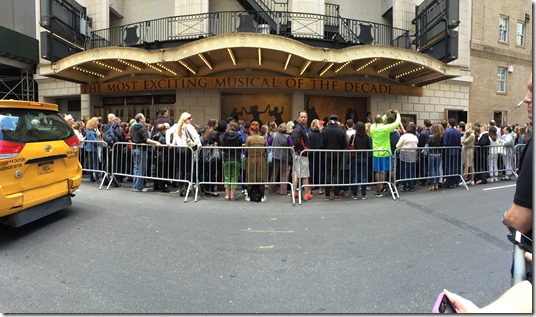 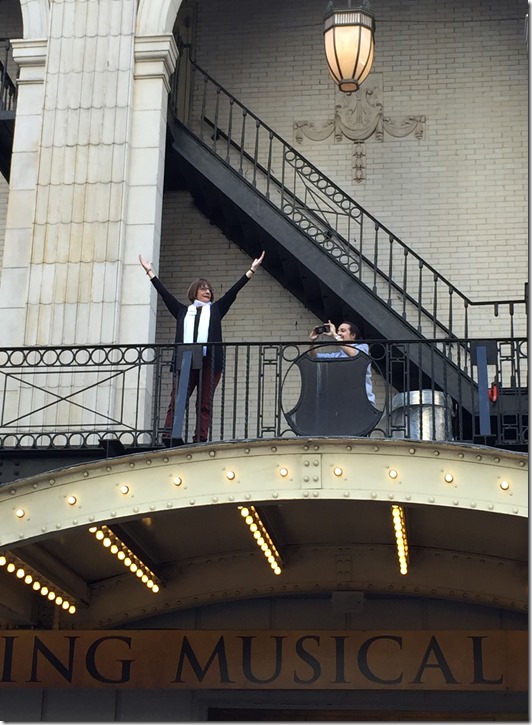 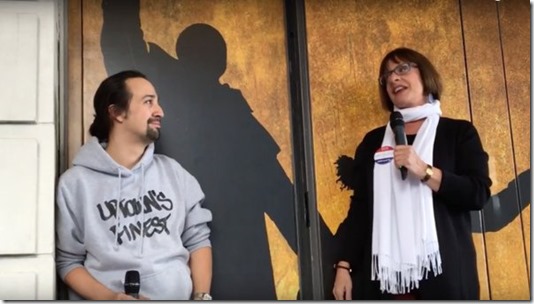 This trip will never be forgotten.  NYC, I say it every time, but you are PURE MAGIC.  You never cease to amaze me or make dreams come true.