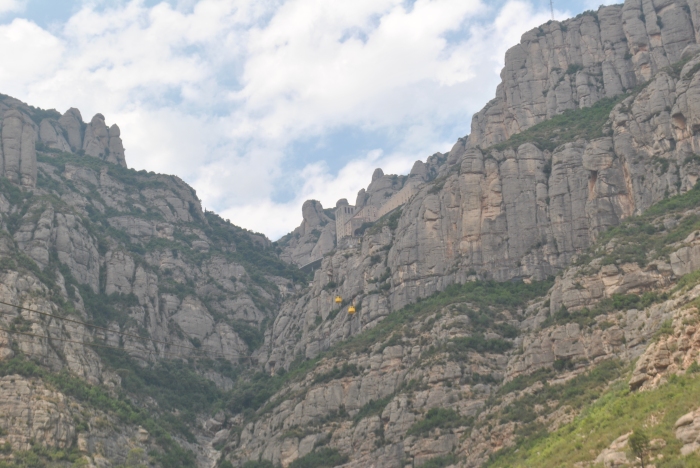 It was Monserrat day. We started by sleeping in a little (WE were tired!) and exhausted (we had a stressed conversation the night before when we found out that our plane landed 4 hours before the kids! how did that happen!). We started at the Boqueria Market to stock up on supplies. Nuts and oranges and apples. And then got on the R4 train at playa catalunya which would connect us to the R5 train to the mountain. Well come to find out that the R5 train is operated by an entirely different company in a different train station that is a short walk away! We found this out by buying a wrong ticket and heading back towards barcelona and then we had to go back and then we had missed the train and had to wait forever to go to the MOUNTAIN. SIGH. NOT EASY! we eventually got there, but it took like 3 hours of trains back and forth before we finally wound our way up the mountain. 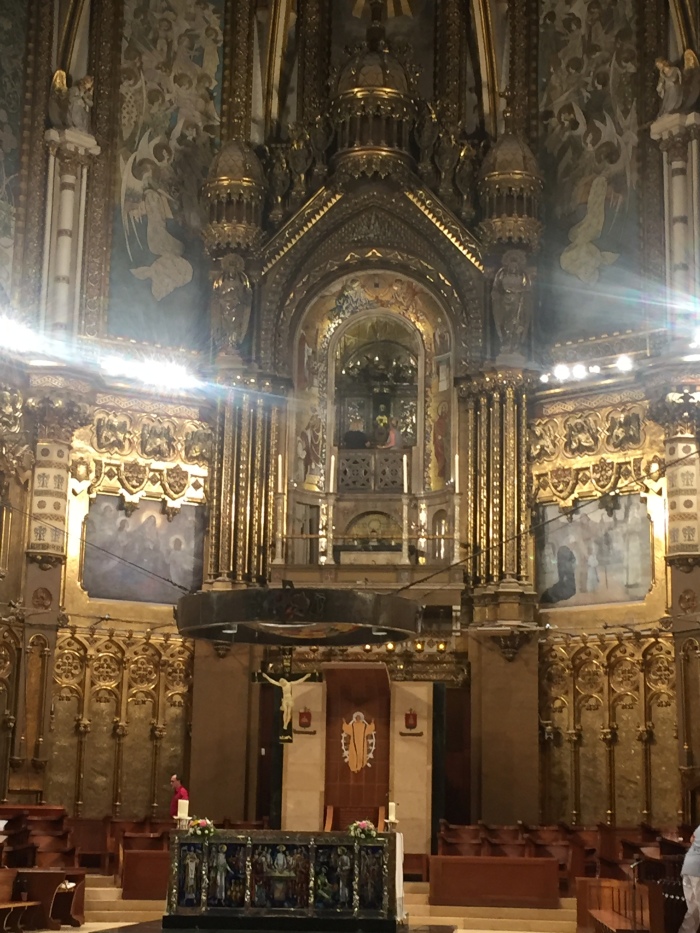 The convent of Monserrat reminds me of the city in “The Two Towers’ how it is cut out of and built into the mountain. There’s like a little city up there complete with church and museum and everything. There was a HUGE line of people waiting so they could walk up to the altar to pay their respects to the “black virgin” a virgin mary statue that had turned black and had been attributed to many miracles. Hours long. So we talked about walking around afterwards and then there were these huge rocks above the town and thought it would be awesome to go up there. we found some hiking trails and started on what I thought was going to be a short hike but then we saw a sign for St Jerome that was 7km and someone said it was the highest point so I wanted to go for it and Tara was willing 😃 It was a tough hike up, but pretty.

We passed some Nuns taking a school class up the mountain and thought if they can do it we can do it. Hiked above the trees, talked about emotions and hard conversations, and made it to the rocks where a staircase and railing had been carved into the rock. On top was breathtaking, kind of like Zugspitz in germany where you could just see forever in every direction.

We were sweating really hard and we didn’t have a lot of water and were trying to conserve but were probably getting dehydrated.Guide book told us to bring a jacket and we definitely did NOT need a jacket. We hung out on the top with nice people from Seattle and France and then hiked back down.

Can you guess who carried the backpack on the way up?  Ewwww….

This time near the bottom we took the funicular the rest of the way to save us 20 minutes of hiking because our feet were dead. About 20k steps already. At the bottom we raced to the cable car (smelly! not good views! not that fun) and it was going to get us down at 607 and we would barely miss the train and have to wait 40 minutes for the next one but luckily the train was a few minutes late so we hopped onto the train (without time to buy a ticket, but since we bought that extra ticket previously we thought it worked out even).

Long train back to barcelona. Listening to “Born a Crime” by Trevor Noah. So eye opening and fascinating. Back to the city we wanted to find another Xiuxu (Choo – Choe ) so we went on a pastry tour. First to La Patisserie and ended up with some kind of cranberry bar. Awesome. Definitely topped our list.

Then to Chok for a cronut. They look amazing and taste ok. Not near as good as NYC. Then we were hungry for dinner. A walk past a souvenir for Halle and then decided to go back and eat at the same place we ate the first night in Barcelona, La Alcoba Azul. This time was just as good if not better with Pan Tomate and Brie Tostas (Brie cheese with bacon and other delicious fixings). Back to the hotel to shower off our dirt and grime of the crazy day.  We ended up beating our record and hiking and walking 11 miles on this day.

Overall, again, Spain was amazing. And Tara is amazing. She is such a fun travel companion. I love traveling with her. We ROCK these cities when we visit them. I feel like we did everything and then some.