This day in Barcelona might go down as the most epic vacation day EVER. I cannot even believe all the amazing things we were able to squeeze into one day. It all started at a pastry shop. Forn Boix to be exact.  We were looking for a great Nutella croissant we had read about. The croissant was ok. But THIS was heaven. 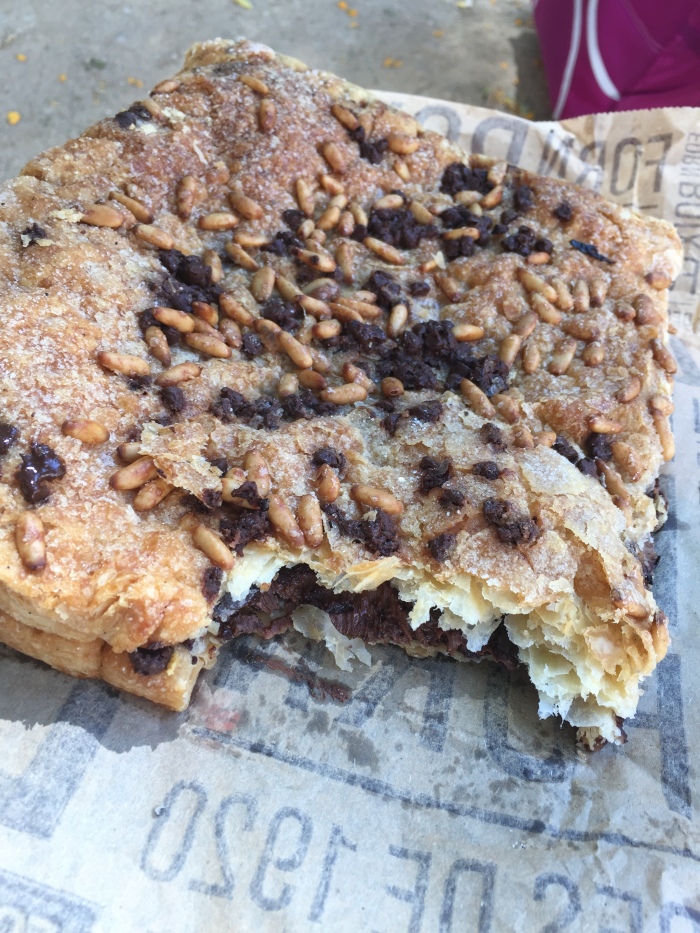 I have no idea what it is called. The ladies in the shop didn’t speak much English and we don’t speak much Spanish. So, we order and she wraps up this GIANT slab of pastry. Rusty tries to ask if there is a smaller version, but there isn’t. We get to the register and she says €22! The croissants were €2 and that pastry was €18!!!! Our eyes bugged out of our head, but we coughed up the money. I told Rusty he can never roll his eyes at an expensive NYC treat again because this one is like 5x the amount I’ve ever spent! Luckily, it was worth it. Flaky crust, creamy chocolate and roasted pine nuts are a combo made in heaven. We ate this thing for 3 days. And it was just as good on the last day as on the first.

After gorging on pastry we rented bikes to hit up the beach. This was one of my favorite things we did. It was a beautiful sunny day and being out by the water felt so good. 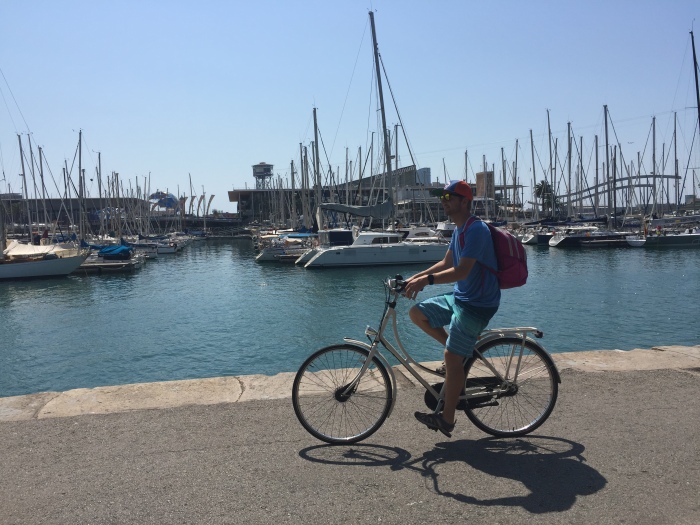 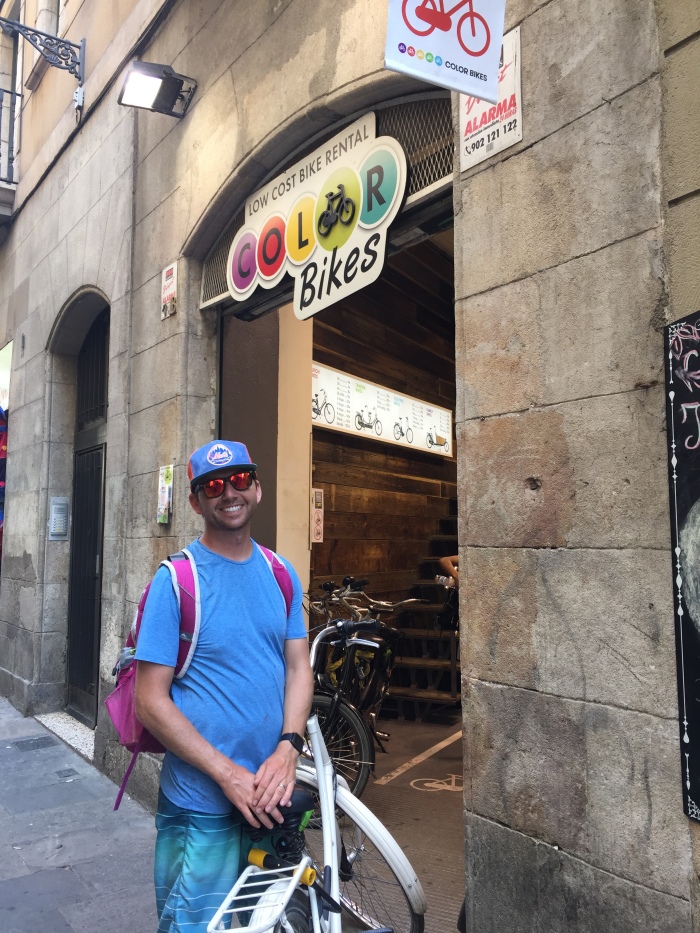 We locked our bikes up right on the beach and headed over to some beach chairs and umbrellas. We weren’t quite sure if they were free to use or if we needed to rent them. But we sat down anyway and figured someone would let us know if we needed to pay. This made Rusty a little nervous and he couldn’t quite relax. Me? I was asleep in like 10 seconds. The beach vendors eventually did find us and we rented the umbrella but not the chairs. Laying in the sand in the shade of the umbrella was so relaxing. We go nonstop on vacation, so it was nice to sit back and relax for awhile. And take another nap 🙂 After some time at the beach we got back on our bikes and headed north up the coast, biking past several lovely little Mediterranean beaches and soaking in the scenery. All in all we biked around 9-10 miles. 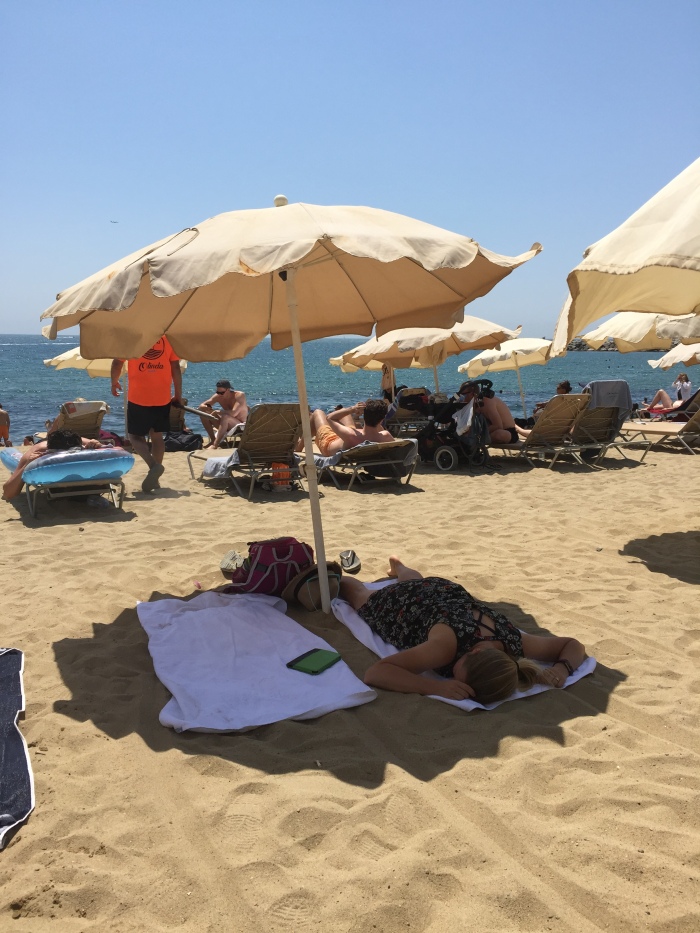 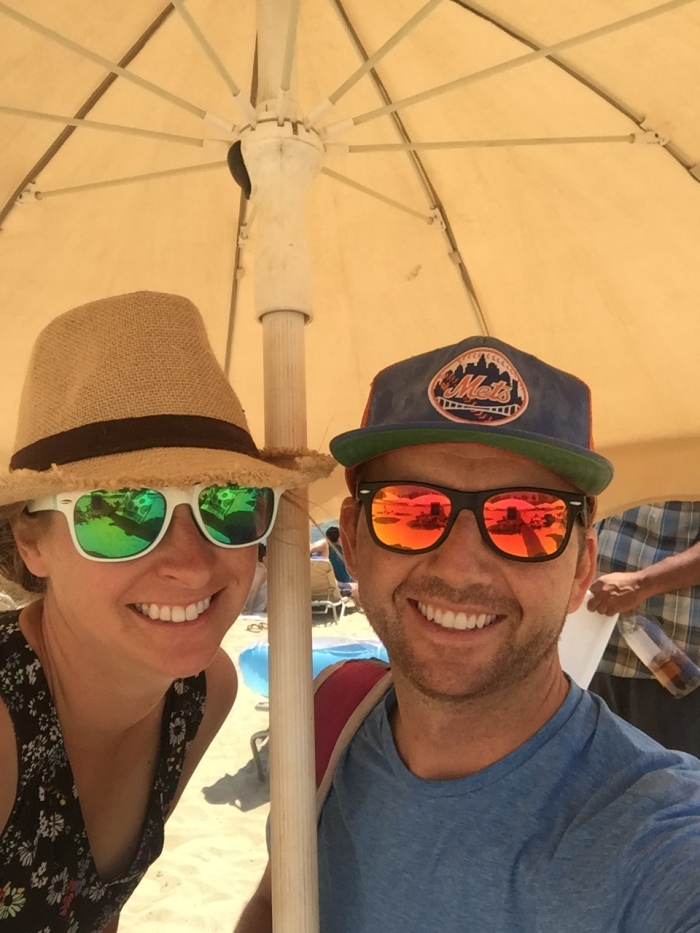 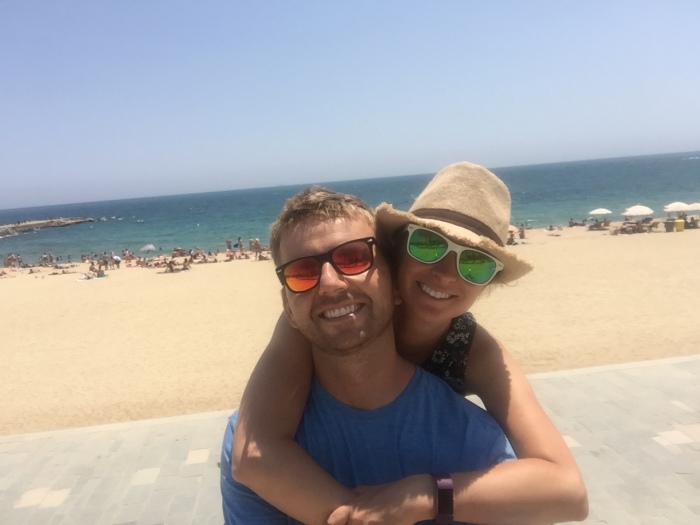 We were so sweaty and hot and we stopped at a fresh fruit vendor to grab a cold, crisp refreshing cup of fruit. Annnd….it was warm and mushy.  There are so many wonderful things about Spain, but their concept of cold isn’t one of them. The most exciting part of the bike ride was getting back into the heart of the city on La Rambla. Bikes, taxis, mopeds and buses all zooming and weaving in and out of tiny roads while hundreds of people crowd the sidewalks. 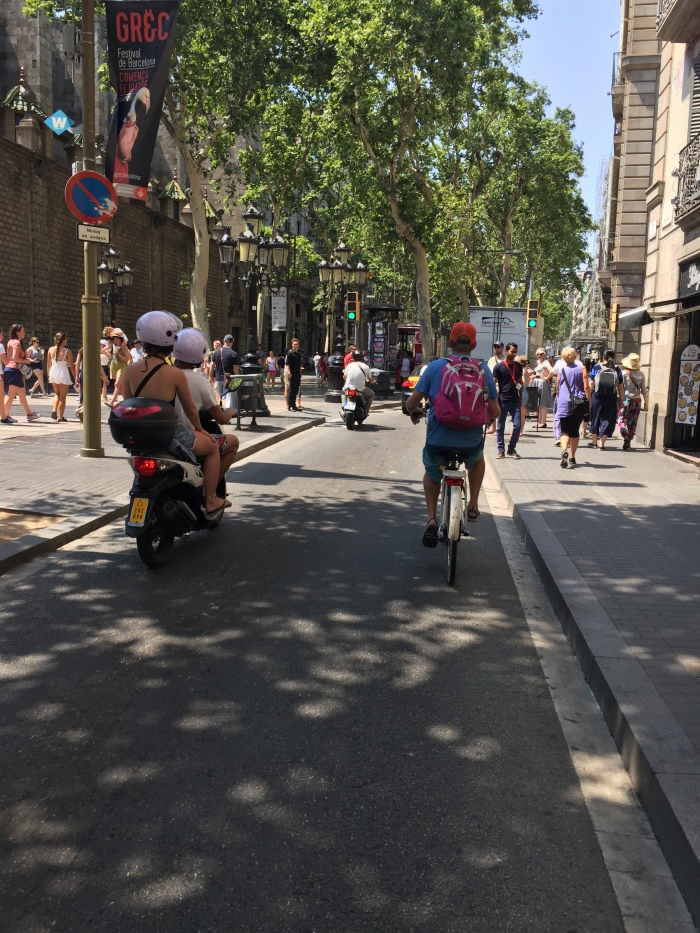 After we returned the bikes we walked to La Boqueria Market, a moment I’ve been dreaming of for months! This fresh outdoor makers is said to be one of the best in all of Europe. And it didn’t disappoint! All the hustle and bustle of vendors selling their wares, beautiful stands of fresh fruits and veggies, colorful dried fruits and nuts, all kinds of meats and seafood. Incredible! We got fresh juice for €1. Rush had mint coconut and I had a lemonade. After biking on the beach this totally hit the spot. I also got another cone of jamón de iberico and manchego cheese. I’m glad to have tried it one more time, but I have to say, jamón is not my favorite. I thought I would love it, but it didn’t hit the spot for me. Rusty found a bowl of organic amazingness. It had pallea, couscous, greens, veggies and a yummy sauce. 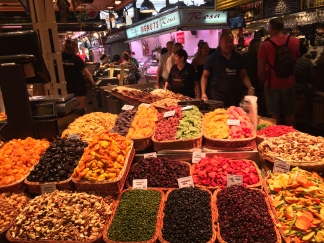 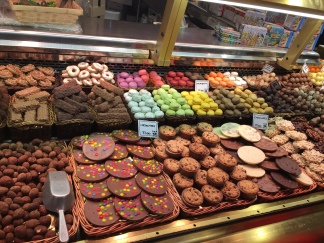 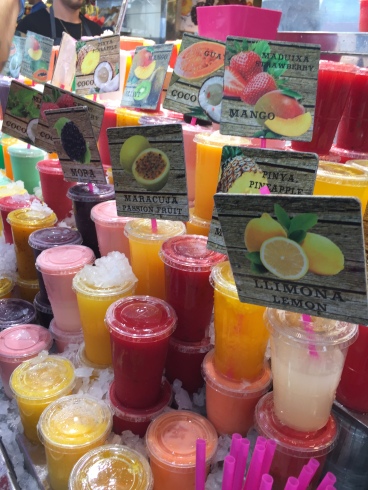 Now it was shower time!! When we were clean and presentable again we made our way to Monjuic. Because of the €18 pastry that morning, we opted to walk to the top of the castle instead to ride the teleferic. We figured this was a sound economic AND heath choice 🙂 It was a steep climb through a beautiful park. We were so happy on the way down to use these giant slides to cut out some walking time. They were super fun! 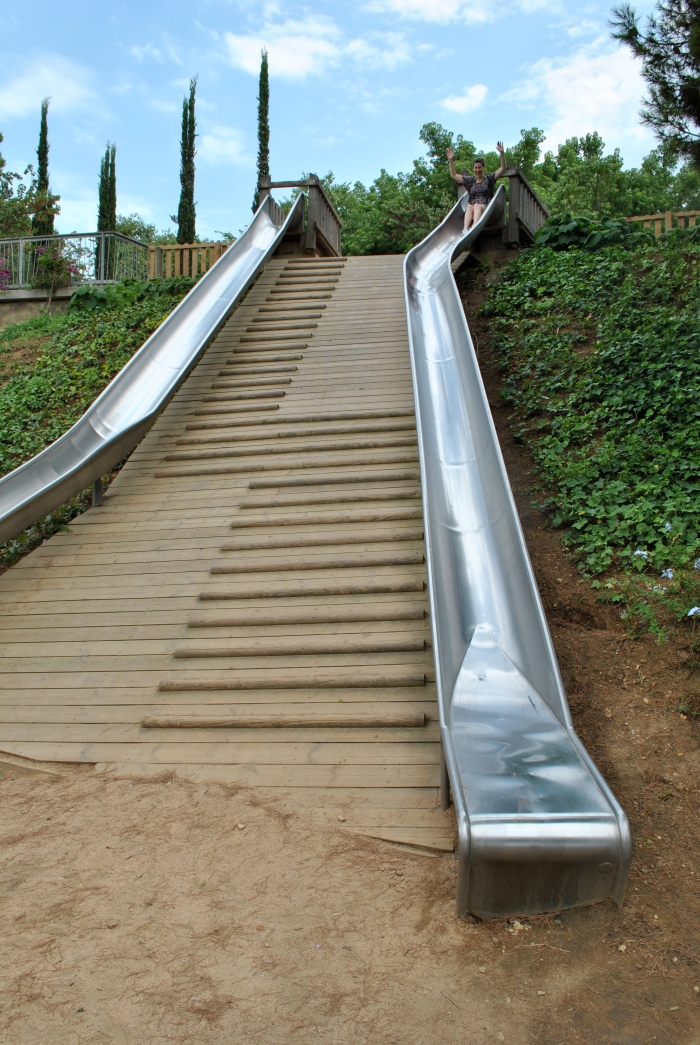 We downloaded a Detour podcast to guide us around the castle and tell us the history. We learned the story of a 20 day conflict between Spain and Barcelona where eventually Spain bombed the city from the castle. I can’t tell you how it ends because the download froze with about 5 min remaining in the tour. Sad! 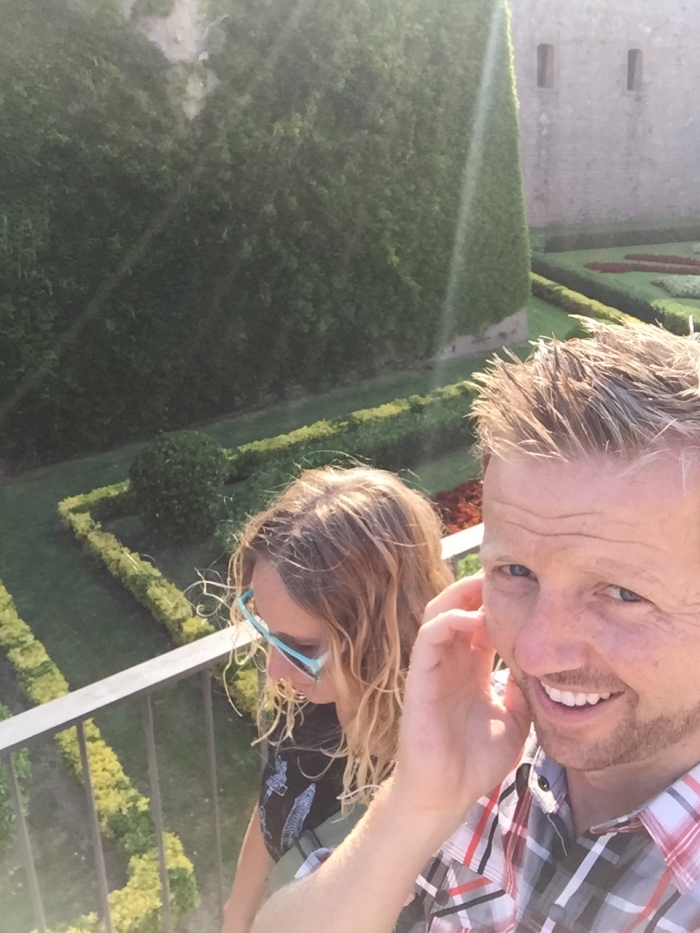 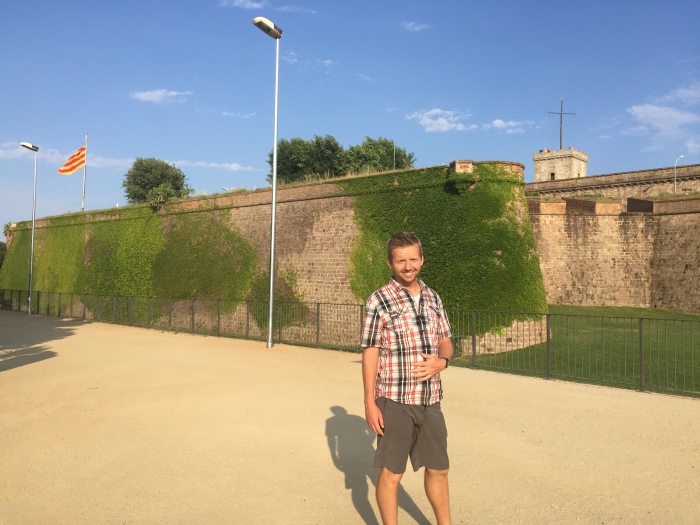 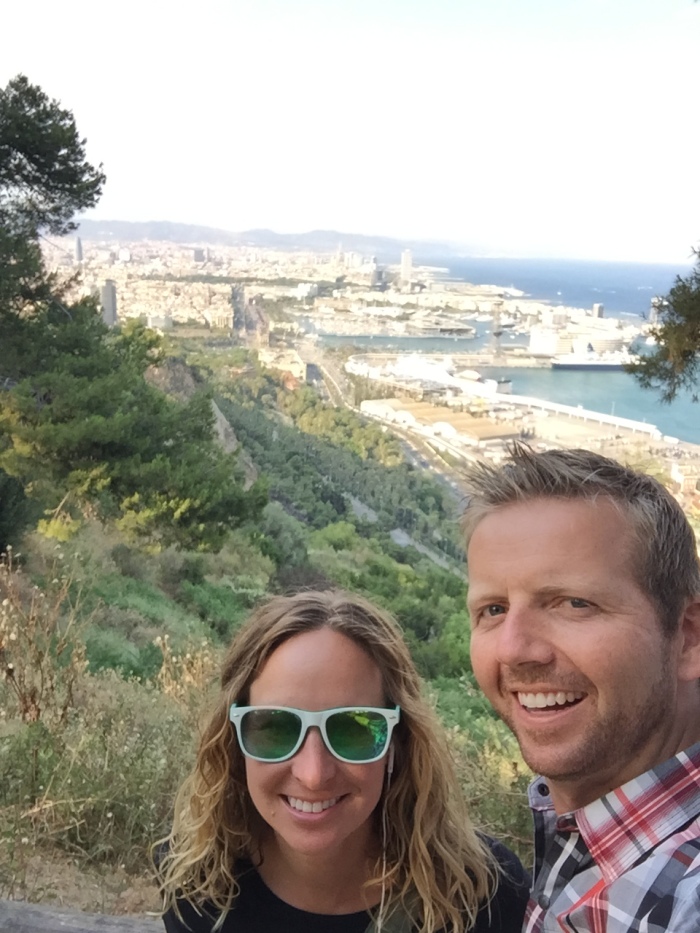 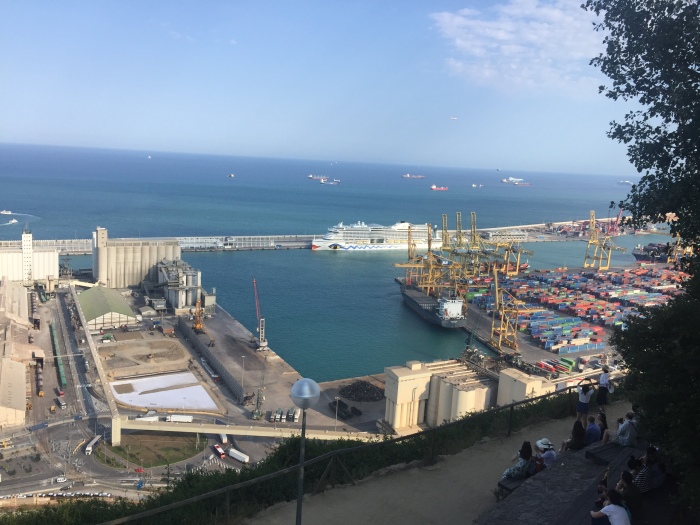 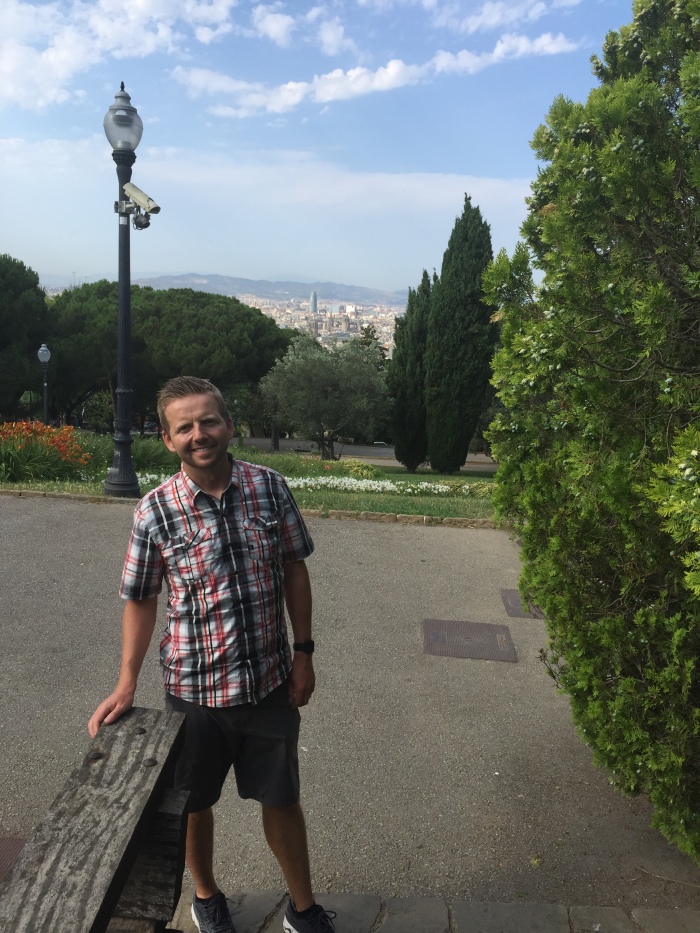 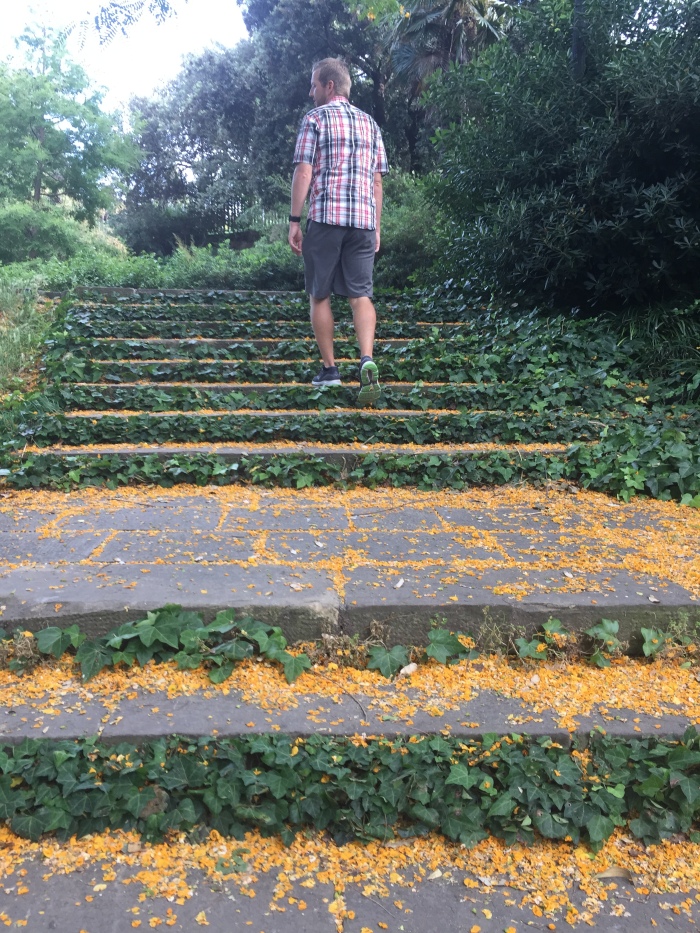 When you find a drinking fountain in Barcelona, you take advantage of it!  I’m still not even sure if these are for human consumption.  There are no drinking fountains in metro stations, in museums or near bathrooms.  Weird. 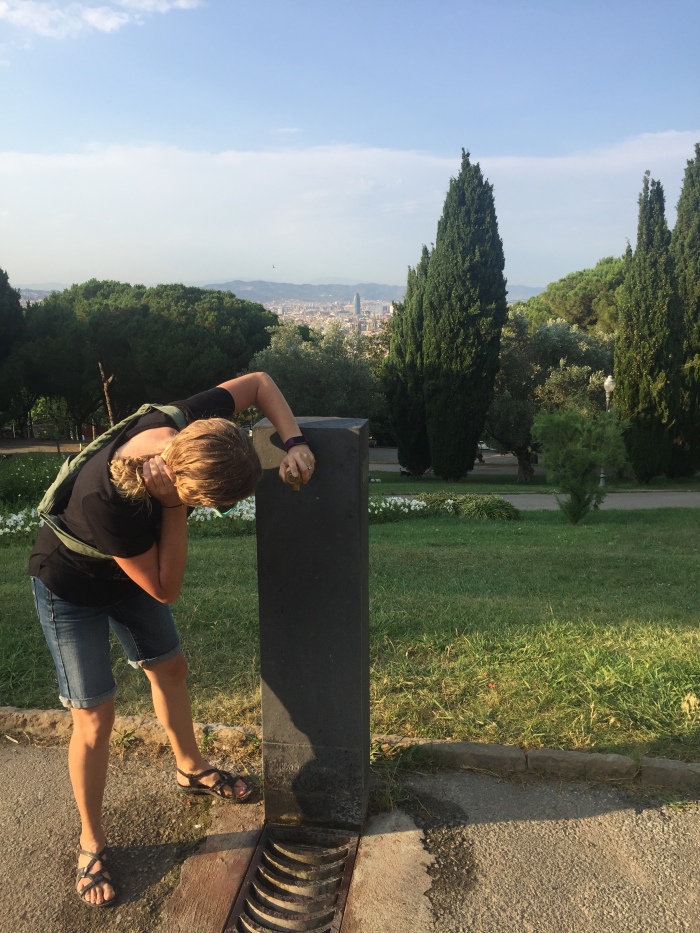 Next we were supposed to go to the Joan Miro Foundation, which I was really excited for.  But my mixed up brain wrote down the wrong hours and we missed it. It’s open late on THURSDAY. Not FRIDAY. I was disappointed! But, these pretty trees helped soothe my disappointment. 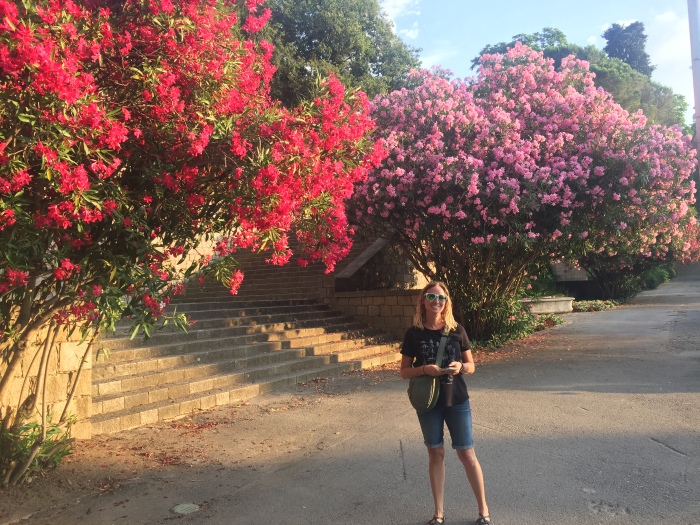 But not doing Miro meant we got an excellent viewing spot for the Magic Fountains. I was not prepared for how spectacular these are! It might be my favorite thing we saw on the trip. I just love fountains! Watching the sun set over Barcelona and then being treated to the colorful fountains and the imposing view of the Catalan Art Museum in the background was a sight I’ll never forget. It was a magical moment for sure.  I didn’t want to leave! But the night was still young and we had places to be! (Just kidding…it was really past our at home bedtime at this point.  But we did have places to be). 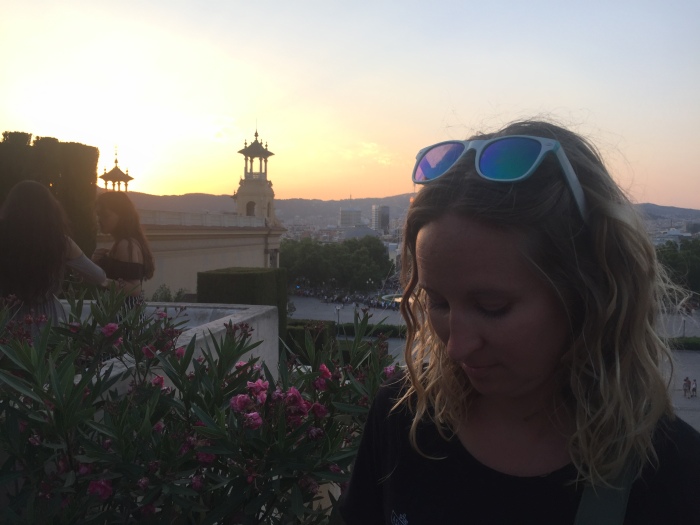 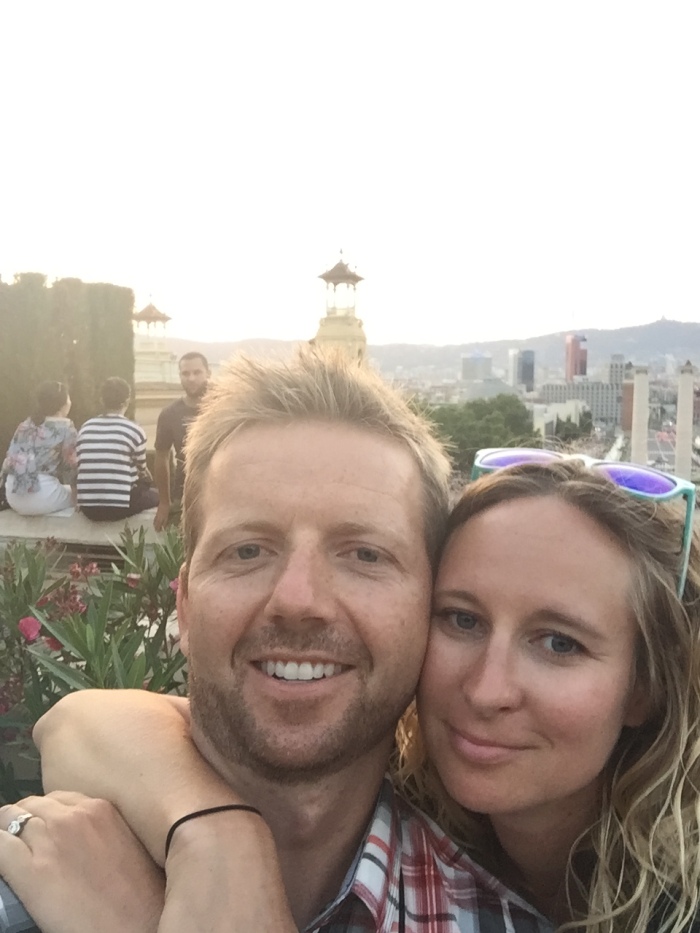 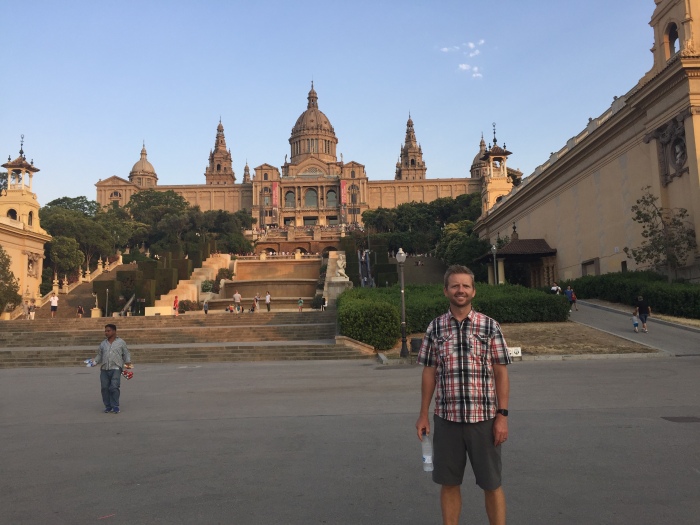 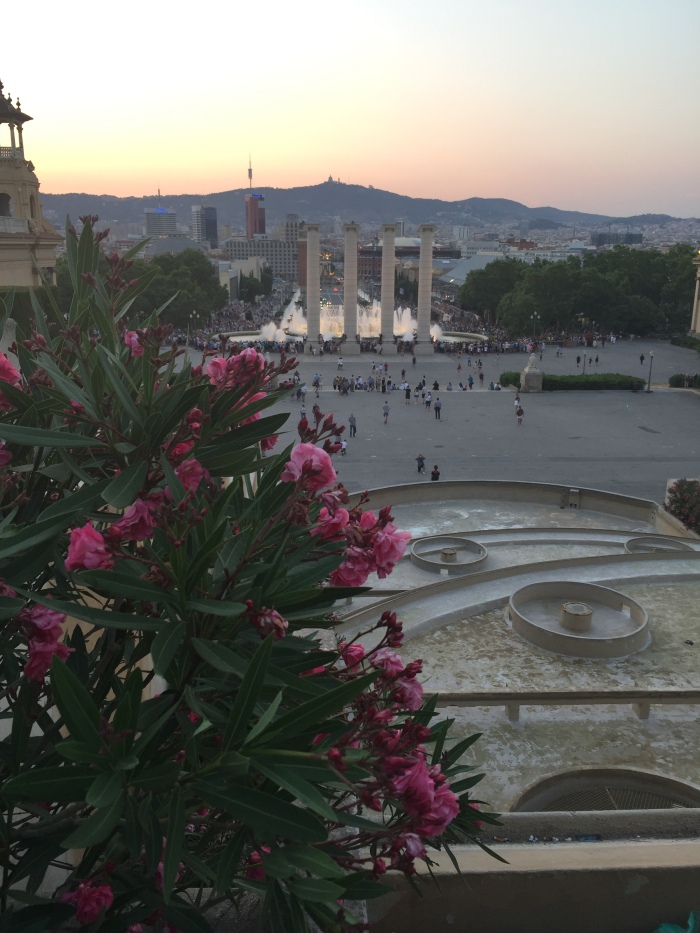 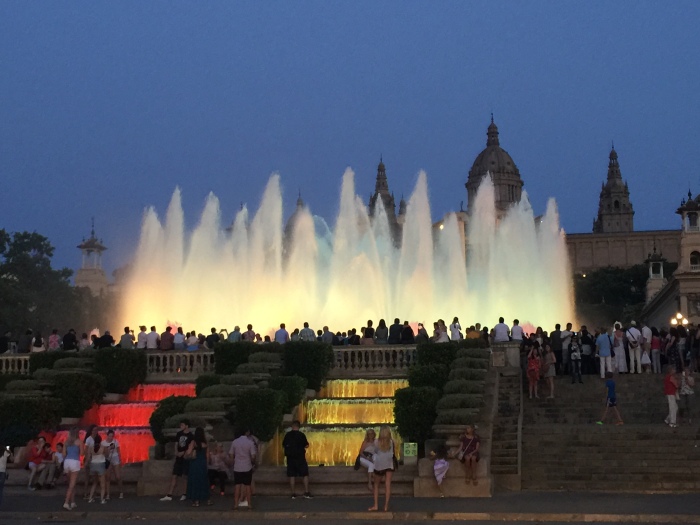 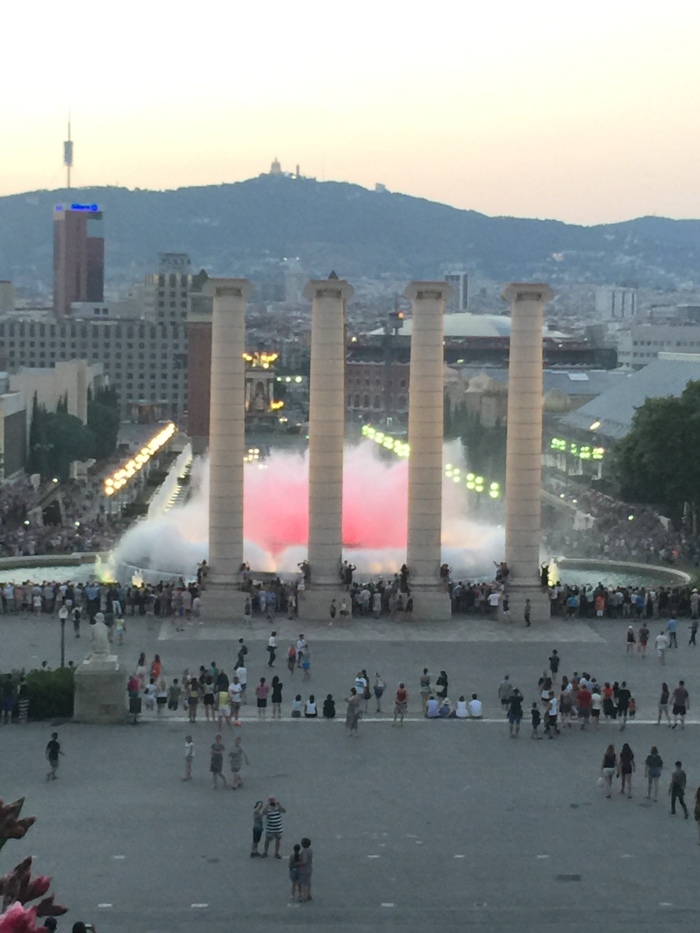 We had been graciously invited by Fele, whom we met at StartupGrind, to a Summer Solstice party. In Barcelona, Summer Solstice and New Years Eve are huge party days. On Summer Solstice, people light firecrackers all over the city all day and all night. And not just little baby firecracker. Heart stopping, sound like gun shot firecrackers. It took our nerves about 1/2 the day to stop jumping out of our skin every time one went off.

The party was right near Placa Espanya in an amazing loft. The space was incredible and belonged to Fele’s friend Frank, who is an artist. It included a giant rooftop patio where the party was in full swing. Everyone was so kind and welcoming and we got lots of Spanish kisses. They had a giant BBQ (the BBQ was welded together by Frank and was very cool and artsy) grilling tons of delicious meat. There were also healthy and delicious salads and some kind of beans and meat dish that was really excellent. We got to meet lots of fun and interesting people and had a great time. I’m glad we went! We were both a little nervous and unsure about going, as we aren’t really party people. We’re so glad we did it anyway. It was fun to meet people from all over the world who now call Barcelona their home. 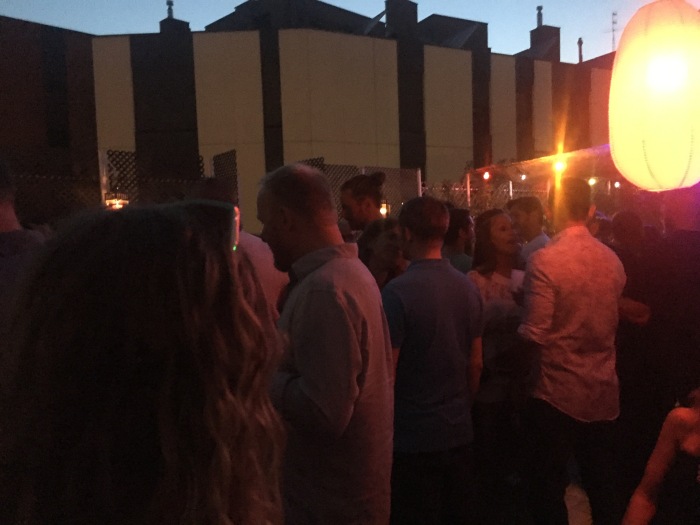 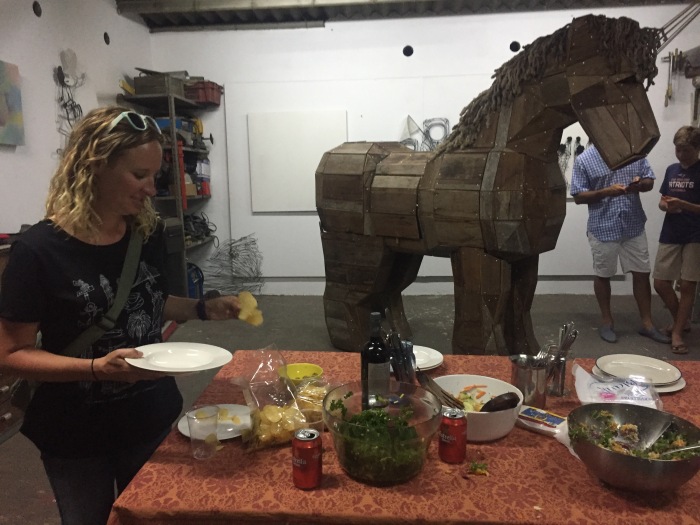 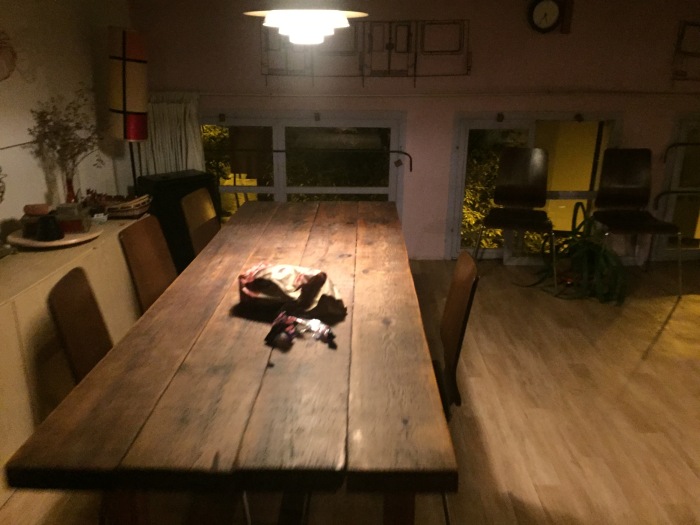 We left the party just before midnight and walked past a glass elevator leading to the rooftop of an old bull fighting ring turned shopping center. It was €1 to the top so we hopped on! 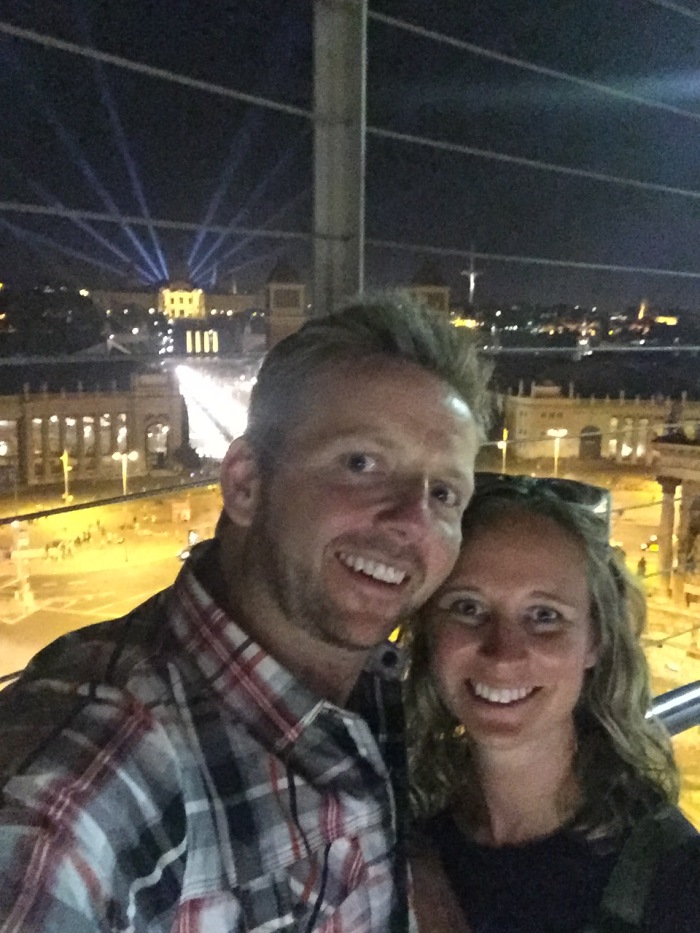 The view from the top was so fun! We could see kids lighting firecrackers in Playa Espanya, and at least 4 different fireworks shows happening all over the city. We had no idea we were coming to Barcelona during a holiday and it made this day extra special to be able to experience it.

Now….bedtime! AFTER a good soak in the foot bath.