Phoenix flights were pretty expensive this year, so we ended up in Austin for our warm weather vacation.  It was lovely.  It always takes us all at least one day to settle in and learn to get along in such close quarters.  So, the first 24 hours were pretty rough.  Lots of whining, complaining, and general orneriness.  But the sunshine did its magic and by day 2 everyone was having a great time.  We spent lots and lots of time at the pool.  We stayed at the Lakeway Resort on Lake Travis and the pool had a beautiful view of the lake.  The pools were heated, which meant the kids could have stayed in them all day.  And believe me, Josh tried. That kid is a fish! After the weekend was over we practically had the whole resort to ourselves.  The kids thought it was pretty awesome to be the only people in the pools. 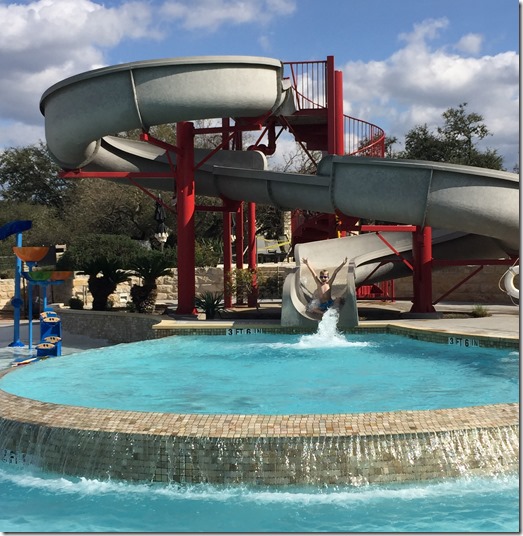 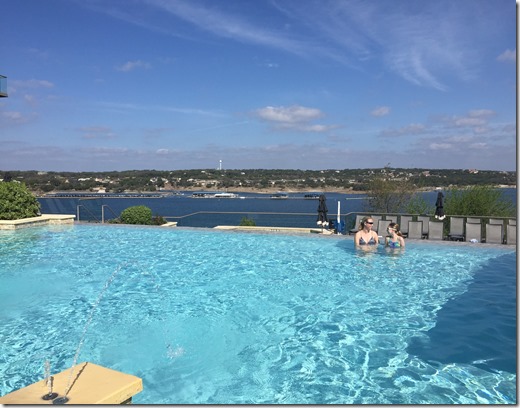 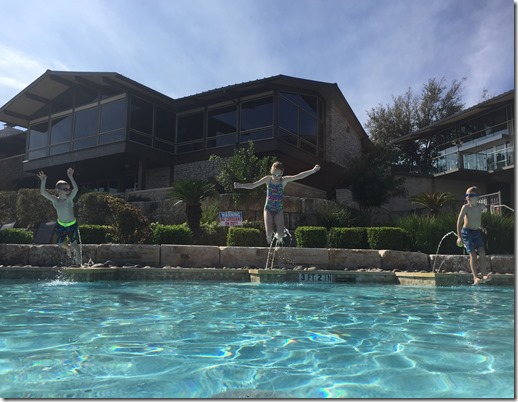 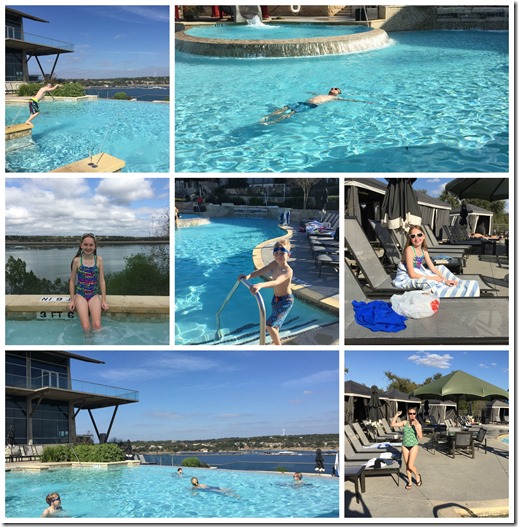 And of course, we had to have a little screen time at the pool too.  Josh cracks me up.  He hates the sun glare so he suffocated under his towel in order to see his iPod more clearly. 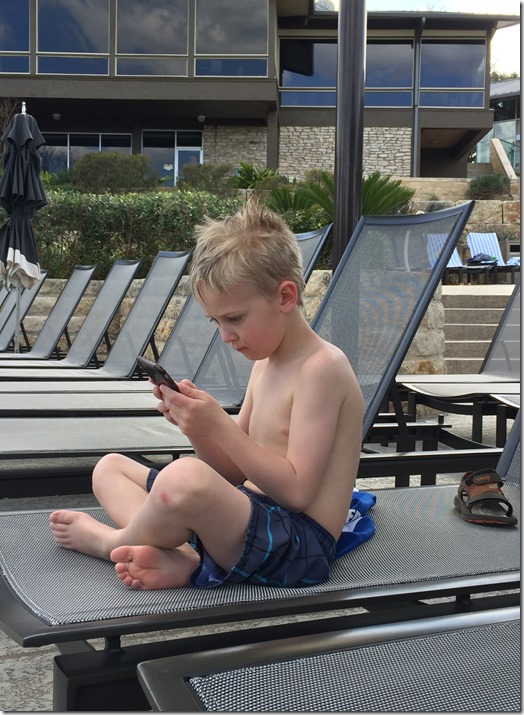 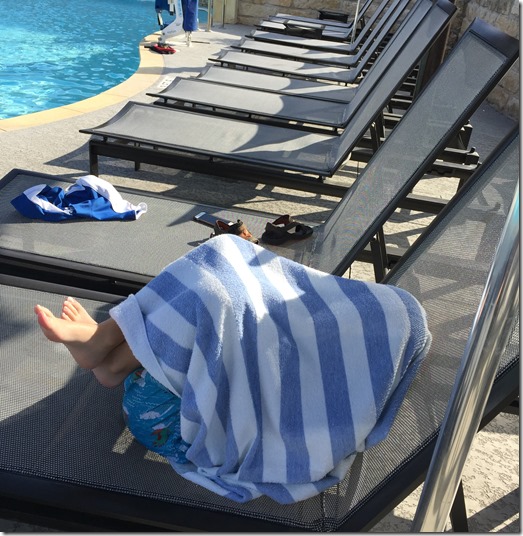 There was one cloudy morning that leant itself perfectly to tennis.  Halle had a blast, Blake was neutral, and Josh made it known that he was only there on the promise of Skittles from Mom. 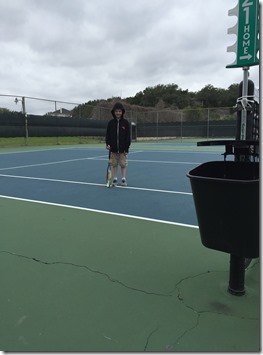 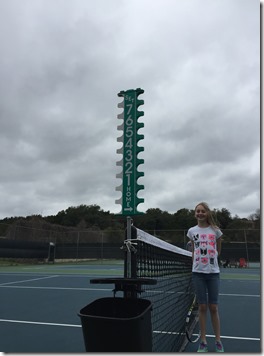 Blake is the cat whisperer.  He finds them wherever we go!  It’s uncanny. 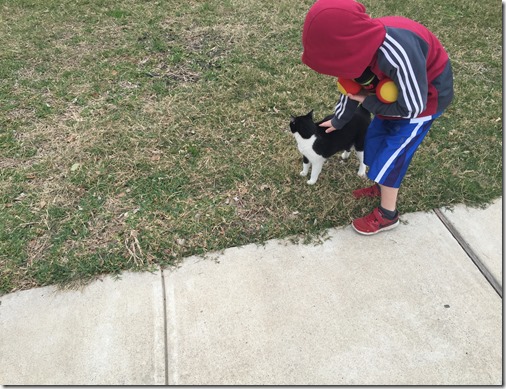 The resort had a Kids Fun Zone.  There were bouncy houses, ping pong, air hockey, basketball, pool tables, a few holes of mini golf and cornhole. It was fun to just run around and be silly for a few hours. Most everyone came away with at least one burn from the rubber on the bouncy houses.  I guess that’s how you know you played hard. 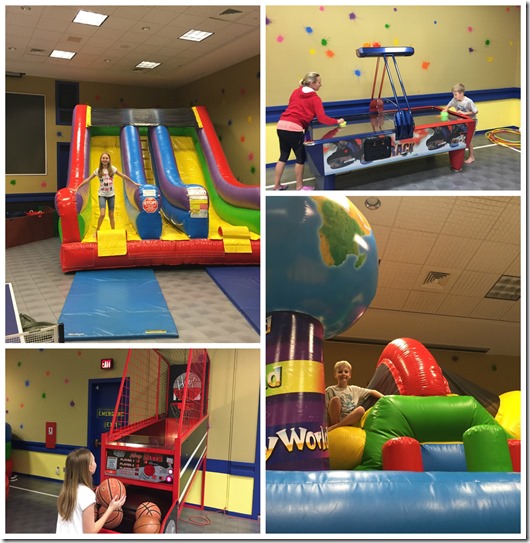 Everyone agrees that their favorite day of the vacation was when we got to go boating with Megan and Russ and family out on Lake Travis.  They rented a boat and the guy at the dock said we were the first rental of the year.  The water was COLD, I think Russ said 56 degrees.  But it didn’t stop anyone from having an amazing time.  The kids absolutely loved to go tubing, and I was surprised that I popped right up on the knee board after a 13 year dry spell.  Rusty and Russ showed us all up on the knee board and the wake board.  Megan opted to wait until later in the season when the water was a little warmer before taking the plunge.  Josh and Kenzie hit it off immediately and spent the entire time perched up at the front of the boat chatting away asking each other “would you rather” questions.  Halle probably liked tubing the best of all the kids and jumped up every time there was a vacancy on the tube. On the tube the kids stayed mostly dry. Halle fell in the water one time and I was so worried it would traumatize her.  Afterward I asked her about it and she said, “Actually, I kinda liked it!”  Brave, crazy girl! 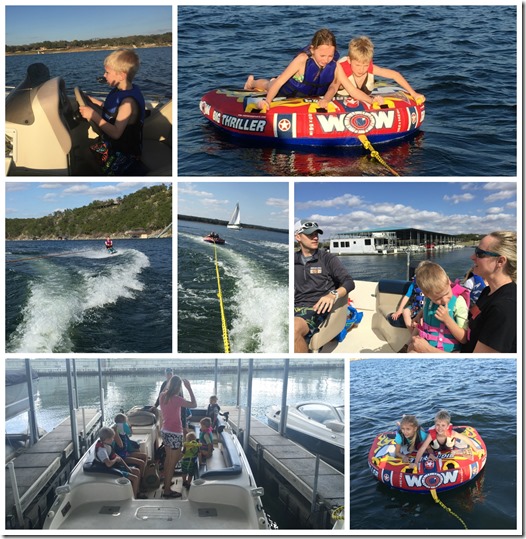 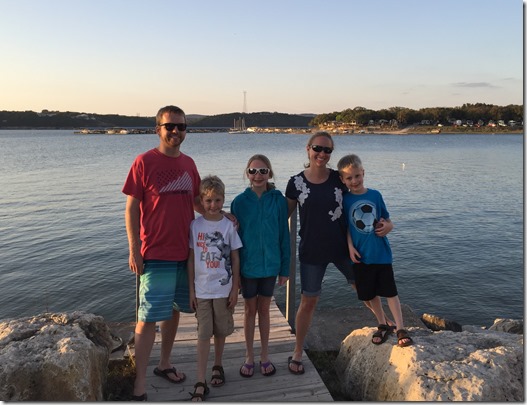 We went to County Line BBQ after.  It’s always an adventure to take that many kids to dinner.  But this place was so fun.  It’s right on the river and so there were TONS of fish and turtles to keep the kids occupied. Halle was the only one brave enough to try and catch a turtle. We were all sad to say goodbye when the time came. But so glad the Jepsons took time out of busy life to come play with us. 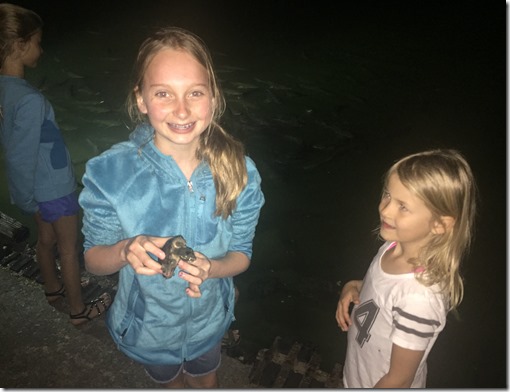 Lakeway is about 1/2 hour from Austin, but we did manage to get to Austin a few times for some fun.  One evening we went to South Congress Bridge and watched the million bats that live under the bridge fly out for their nightly feeding.  It was pretty amazing.  In the sky as far as you could see there was just one long line of bats.  Halle said it reminded her of the Wizard of Oz when the wicked witch sends all her flying monkeys.  There was the funniest man who was wearing a bat hat and trying to get everyone to go on top of the bridge vs the grass below the bridge.  He never said a word but mimed the bats pooping on everyone below and how the poop would get in our eyes.  Halle and I could not stop laughing at his gestures.  The boys were pretty worried about getting pooped on, so they went to the top of the bridge.  Halle and I stayed below.  And we didn’t get pooped on. 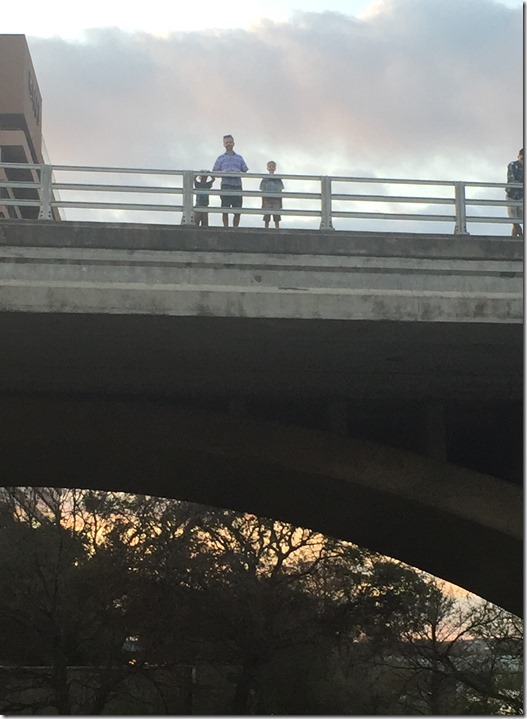 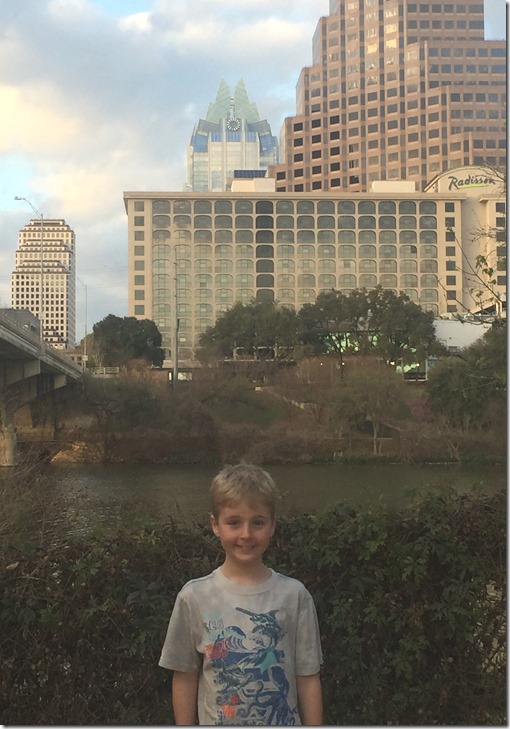 We also went biking around Lady Bird Lake.  Which is really just the Colorado River.  So, I’m not really sure why they call it a Lake

We biked about 8 miles.  It is such a fun trail.  Everyone had a good time.  We got milkshakes afterward at one of Austin’s many food truck trailer parks. 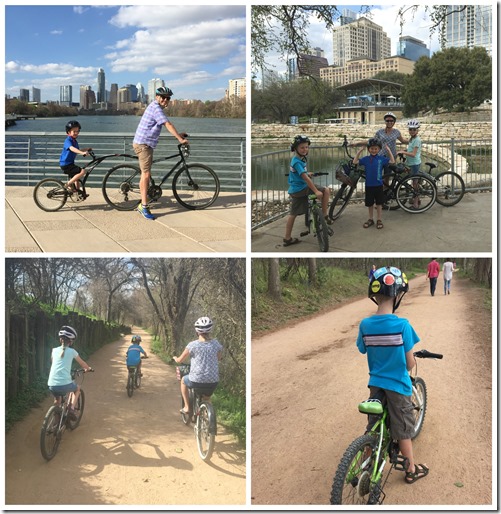 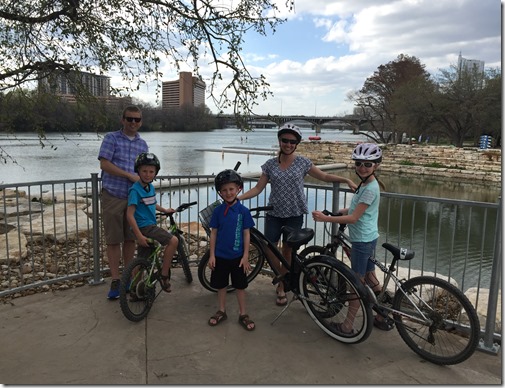 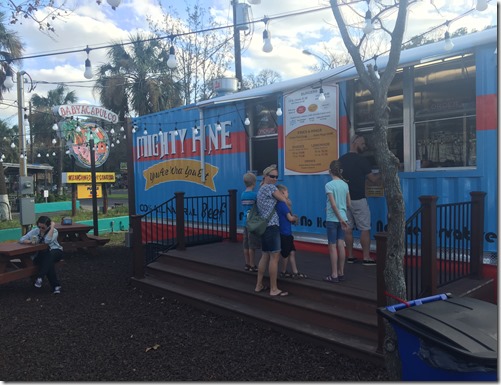 Another thing we really enjoy is running on vacation and discovering fun new things.  The architecture in Lakeway was really cool and we loved running and seeing all the funky lake houses.  We also stumbled on this beautiful greenbelt trail where we saw a ton of squirrels.  We brought the kids back for a picnic and all the squirrels were gone.  Bummer.  Another super fun thing was that Halle came with us on one of our morning runs.  How cool is that? And, running at sea level is just so darn awesome.  It feels so good. 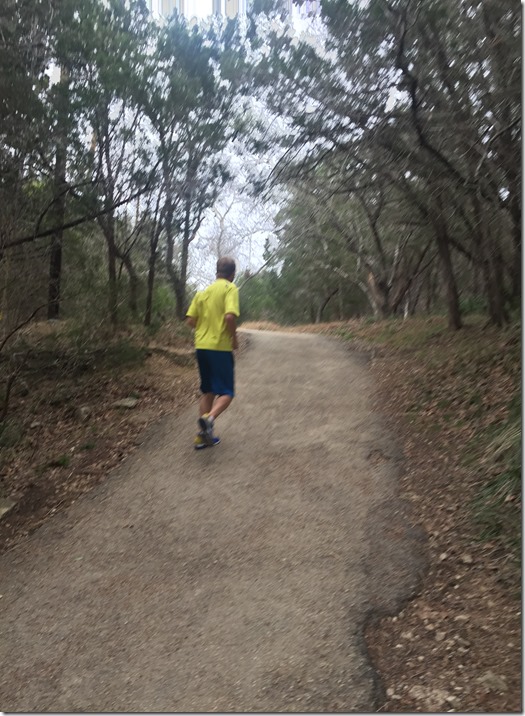 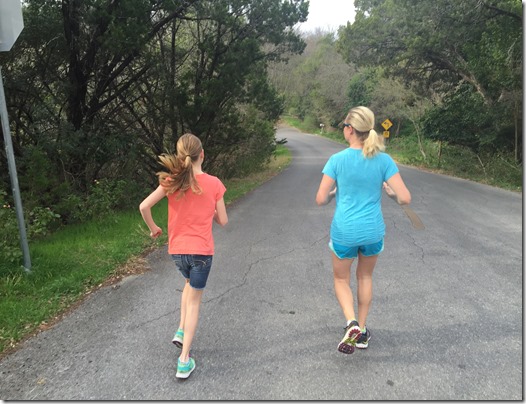 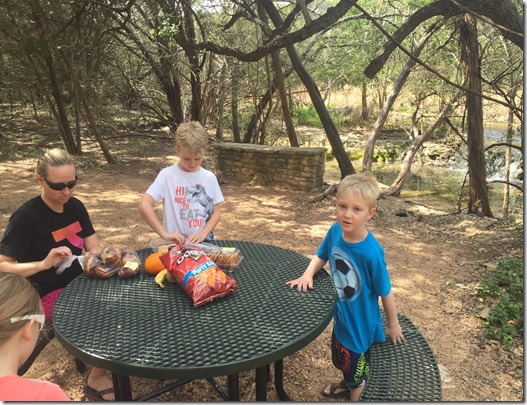 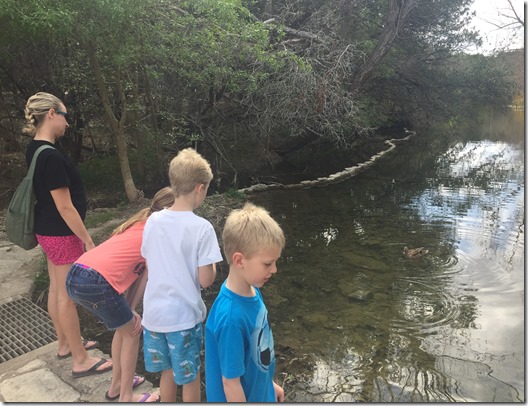 And last but not least: Jumping on the beds is the best part of any vacation. 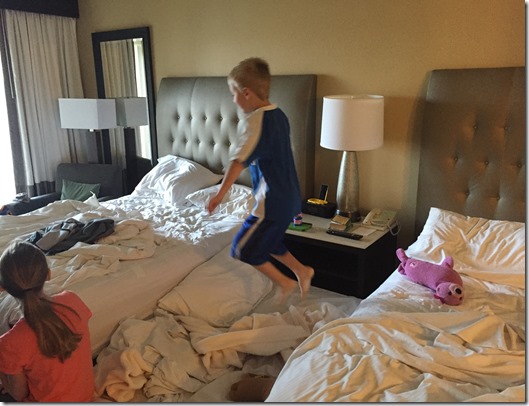