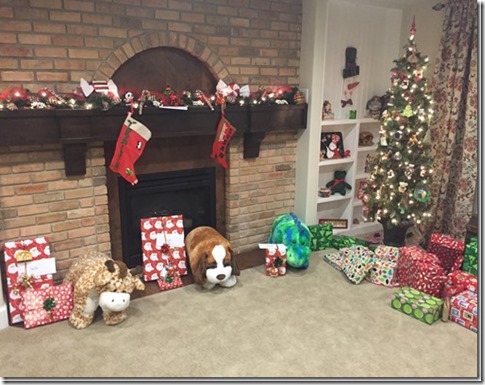 Santa found us again!  We woke up to a VERY white Christmas morning.  Our kids never wake up early on Christmas, a fact that Landon and Cole are pretty grateful for.  They got up around 8 and everyone gathered round to see what Santa brought.  Their eyes grew huge as they took in their GIANT, soft, fuzzy pillow pets.  Blake immediately declared his dinosaur to be his new best friend.  It was so cute. 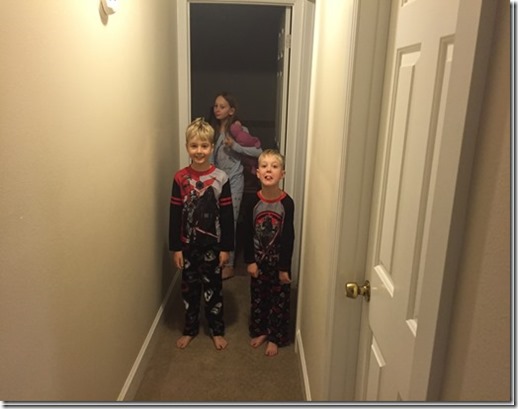 Santa brought Halle the Lego Dolphin Cruise ship. She also got some more doll craft kids, all the Anne of Green Gables books, a knitting loom, and a Simon Swipe game. 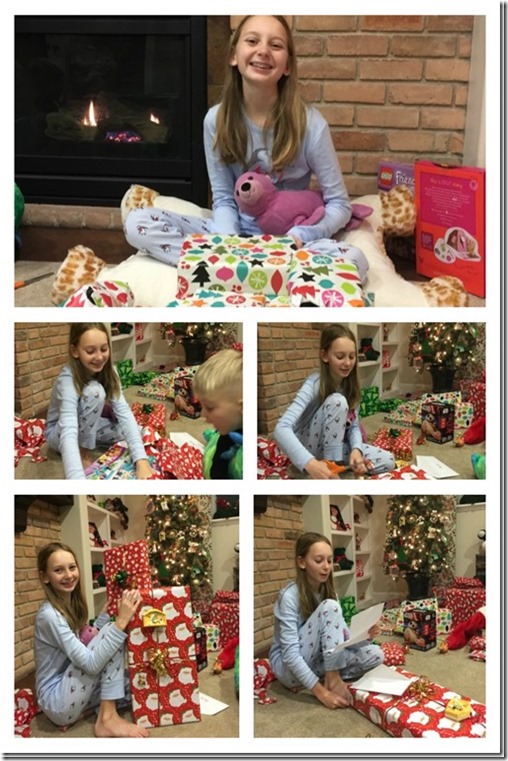 Josh got a Wii from Santa.  That lucky duck!  It was so fun to watch him open it and watch his face completely light up. He had told Santa to surprise him, and I don’t think he could have imagined a better surprise.  He also got a Rock Tumbler, the Exploding Kittens game, some Wii games, and a kids Guinness Book of World Records. 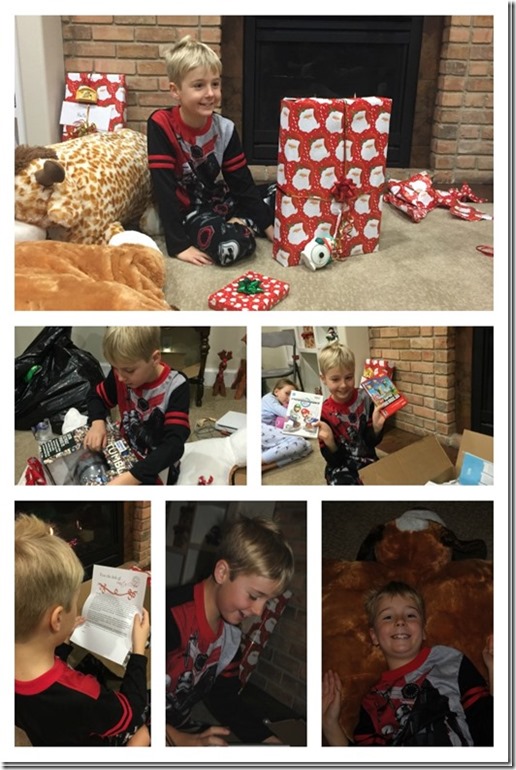 Blake had begged and begged for a remote control BB-8 drone.  Santa totally went out of his way to research and find a fun, affordable model.  Blake was excited when he opened it, played with it for about 15 min, and then totally forgot about it.  I put it up in the cupboard when we got home from Utah to see if he would even remember he had it.  Well….he didn’t.  So, this mom took that toy back to Target.  (Halle, if you are reading this, don’t you dare tell Blake 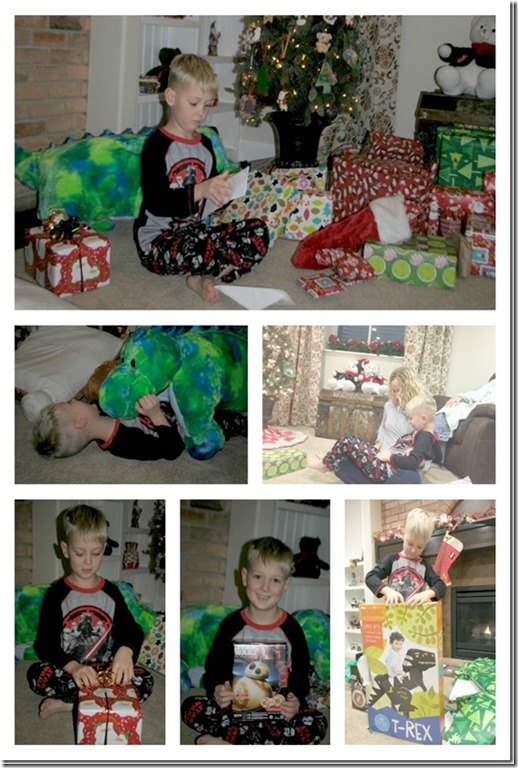 Then it was time for the annual stocking hunt.  This one ended in tears, as it was Josh’s turn to find the stockings, but Halle found them first.  This year they all got a character from Inside Out in their stocking.  Josh got a girl mystery mini figure, but he did a good job holding back his disappointment.  The boys each got a set of Star Wars Mini Figures that they love.  And, quite possibly my favorite gift of the year appeared in Halle’s stocking.  It was a sweater for her seal, Princess.  She often tries to dress her in Build-a-Bear clothes but they never fit.  This cute pink sweater fit her perfectly and Halle just loves it.  Princess wears it often in the day but takes it off at night because it is too itchy to sleep in

Rust gave me the best present this year.  He donated to one of my favorite charity organizations—the International Rescue Committee and gave me the gift of one healthy pregnancy and one year of school for a refugee girl.  I teared up when I opened it.  Blake had made me a darling coaster that I just loved.  But he heard me tell someone that Rusty’s present was my favorite.  A few days later he came to me in tears.  I bent down and asked him what was wrong.  He threw his little arms around my neck and sobbed, “I wanted you to like my present the best, but you said Dad’s was your favorite!”  It about broke my heart and I assured him that his present meant so much to me.  I really do just cherish their little gifts.  Halle bought me a beautiful red necklace made from paper beads that an African organization was selling at her school.  I love it for two reasons—one, that she spent her hard earned money to buy it for me, and two, that it also helped women trying to fend for themselves. 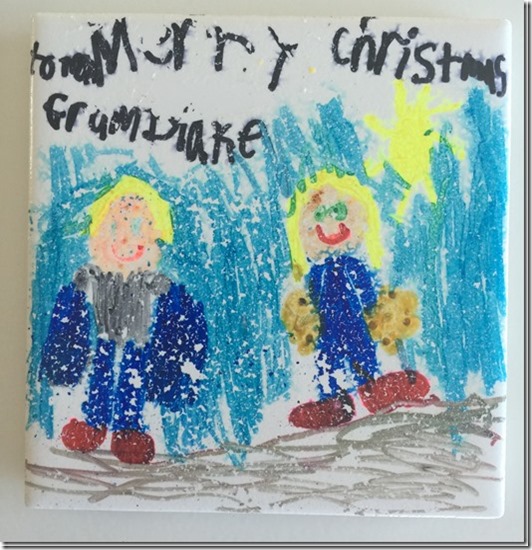 Rusty and I almost bailed on our Christmas run because it was snowing, bitter cold, and there was probably 14 inches on the ground.  But we decided we just go for a few minutes.  Once we got outside it was absolutely beautiful.  We did a walk/run and went to the trials at Art Dye park that lead to Highland Glen.  There was a guy out who had just finished plowing the trails.  Couldn’t have asked for better timing.  5 miles later, and completely frozen, we made it home.  (Don’t mind my bug sunglasses—I do realize they aren’t my greatest pair) 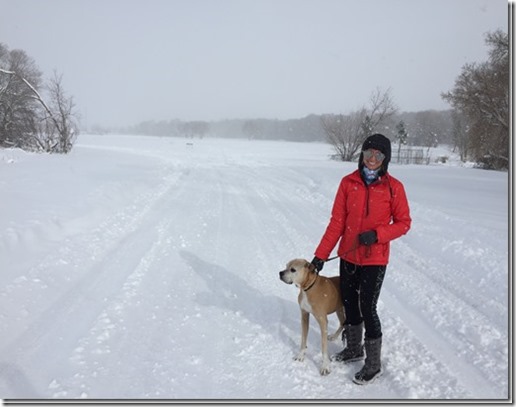 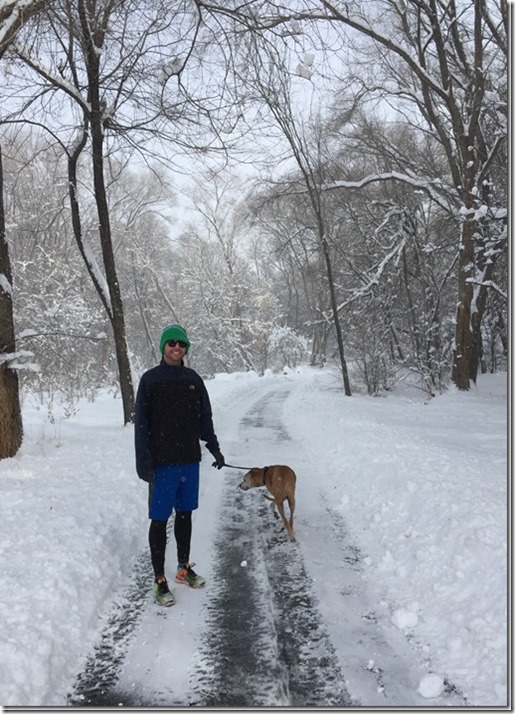 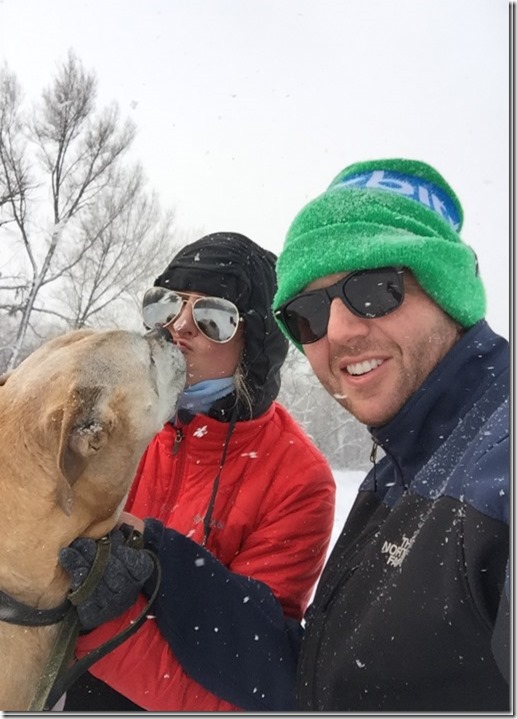 The boys all had fun playing the Wii together for most of the day.  I think by the time Christmas Break was over they had logged almost 24 hours of play. 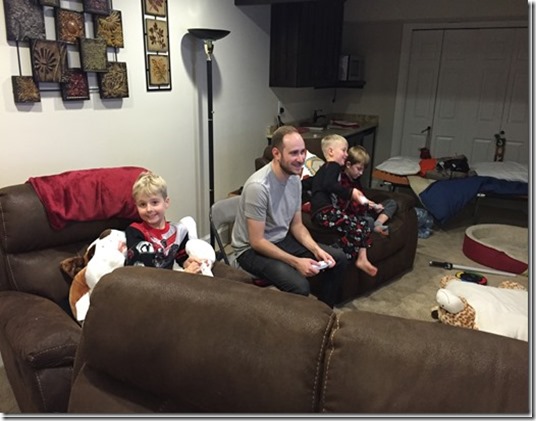 We spent Christmas Evening at the Banks house.  Rusty had purchased his favorite Vega One protein shake complete with bananas, chocolate almond milk and a jar of peanut butter for Cory and Lindsey and for Alan. We had been talking about breakfast food a few days before, and it an effort to keep his gift a secret he completely over sold his “favorite breakfast ever.”  Everyone was so intrigued by Christmas evening when we opened gifts that we all had a good laugh at the protein powder.
We ate delicious stew and rolls and played games.  And apparently, I took no pics.  This is my only one. 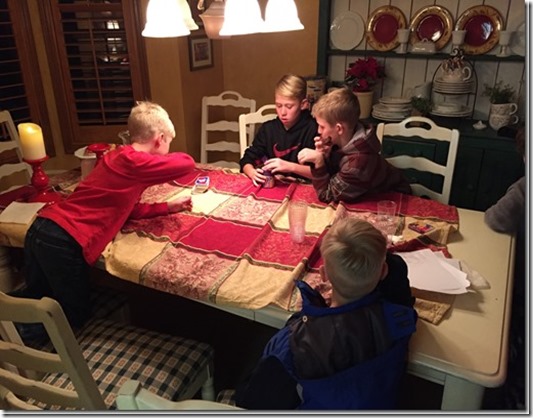 Another special thing about this Christmas is that it was a full moon!  That hadn’t happened since 1977, and won’t happen again until 2034.  It was really beautiful and Josh thought that was one of the most cool parts of the day.  He wanted his picture with the full moon, but darn it all—that moon did not want to take a beautiful picture. 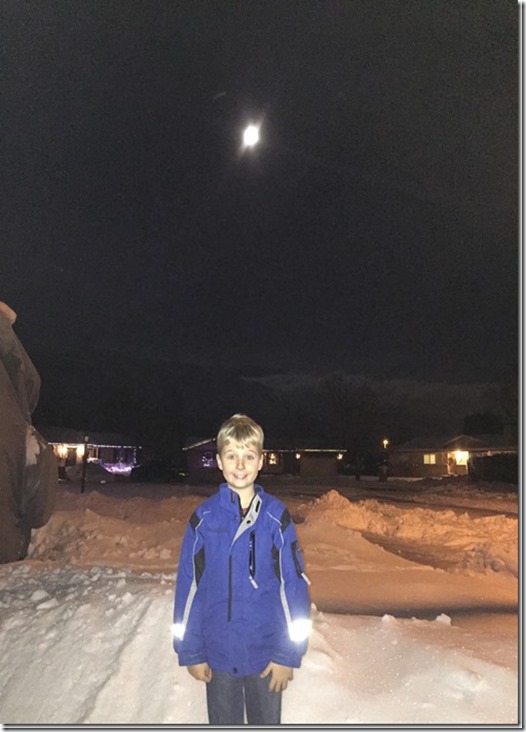 So, we turned to Google for a magnificent shot of Santa and the reindeer flying by. 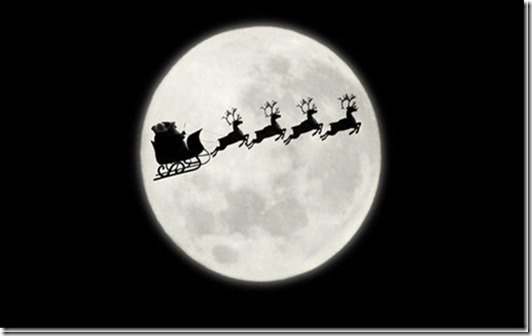 Merry Christmas to all, and to all a GOOD NIGHT!