We were all pooped after a busy week.  So Saturday we took a break.  We all slept in, had a lazy breakfast, cleaned up the apartment and then just vegged out till the late afternoon.  We had scored cheap tickets to School of Rock at TKTS, and also the kids wanted to show Rusty the parakeets.  Off we went.  The kids wanted to play at the Diana Fountain for a little bit, but when we got there, it was PACKED.  So, they played battleship in their newspapers instead.

Today the Parakeets weren’t quite as hungry.  I think with the weekend come more people to feed them.  Someone gave Blake some bird seed, and that was the best enticement. 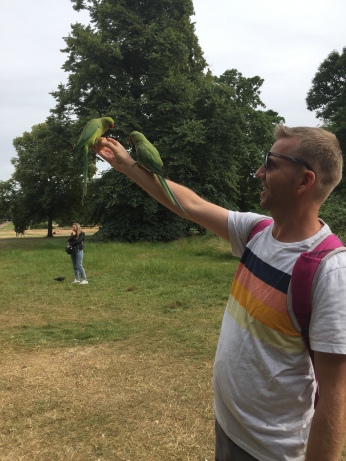 We took the subway over to Piccadilly Circus.  The kids weren’t all that impressed.  Then we walked to dinner at the Spaghetti house.  This place was fun because the kids could choose and appetizer and a main dish for £6.  The boys both chose Margarita pizza and Halle and I split a Caesar Salad.  The salad was SWIMMING in dressing.  There was probably enough dressing for about 12 salads.  They were really nice about it and brought us out more lettuce and croutons.  And she comped the salad.  Of course, everything takes longer than we think and now we were RUSHING to get to the show.  We were racing up the stairs as the were calling 1 minute till show time and we slid into our seats seconds before the lights went out.  Our seats were awesome.  The way the theater is set up, there is not a chance that the person in front of you can block your view.  So perfect for kids. 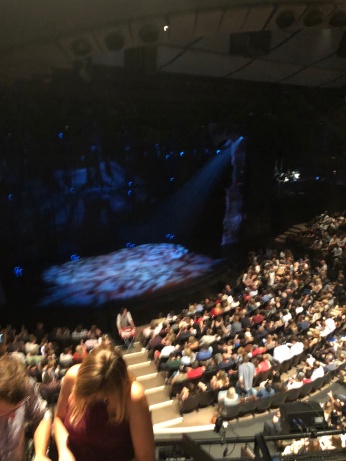 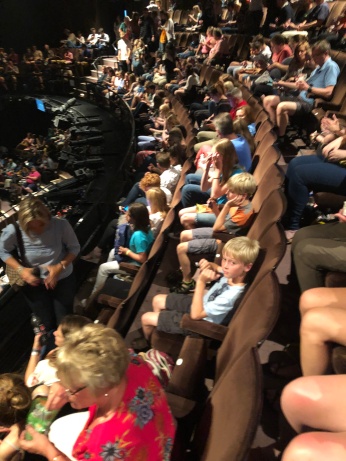 The show was an absolute blast.  There was a fair amount of swearing that left Josh and Blake pretty wide eyed.  There was a part where the teacher sang, “And the s$*% will hit the fan”  The kids were supposed to repeat it and one of the little girls said, “Wait, wait wait. Can we SAY that????”  The teacher replied, “You can say whatever you want in Rock and Roll!”  She got the biggest grin on her face and said, “COOL!”  Blake laughed and laughed and laughed.

The kids in the show were so talented and I think my kids loved watching someone close to their age on stage.  And the end of the show is just like being at a rock concert.  So much energy!  I’m so glad we went.