While everyone else was still waking up, Nat and I walked to a nearby boulangerie to get some croissants. We had also picked up some yogurt in glass containers and some strawberries. It made for the perfect breakfast. The night before we hit the grocery store and Rusty needed to run to the ATM.  We were too tired to walk another step, so we sat down to wait for him.  I love this picture.

Blake was thrilled o see a money exchange just outside our apartment. He LOVED changing his Dollars for Euros and couldn’t wait to spend them. I had to talk him out of many questionable purchases in the first few hours.

We began the day with a quick trip the the Opera House. It is incredibly opulent inside!

Then we caught the RER to Versailles. While we were on the train a man came through playing his accordion for money. Blake took one of his Euros out of his pocket and dropped it in his cup. it was really sweet.

We grabbed lunch in Versailles down this adorable little side street lined with patisseries, boulangeries and cafes. I declare this Ham, cheese and butter sandwich to be the best thing I ate in Paris. 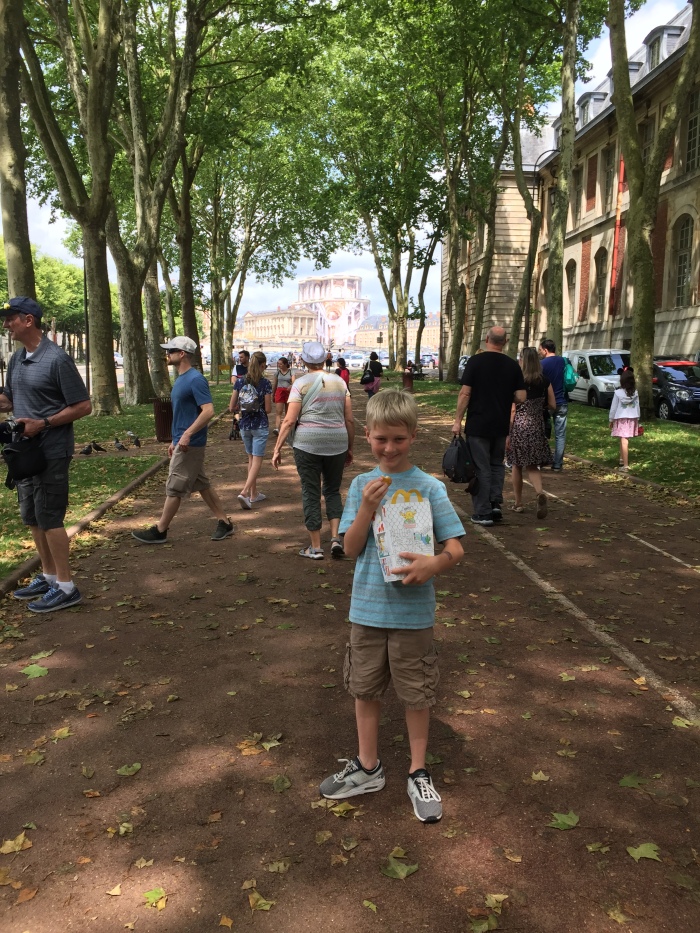 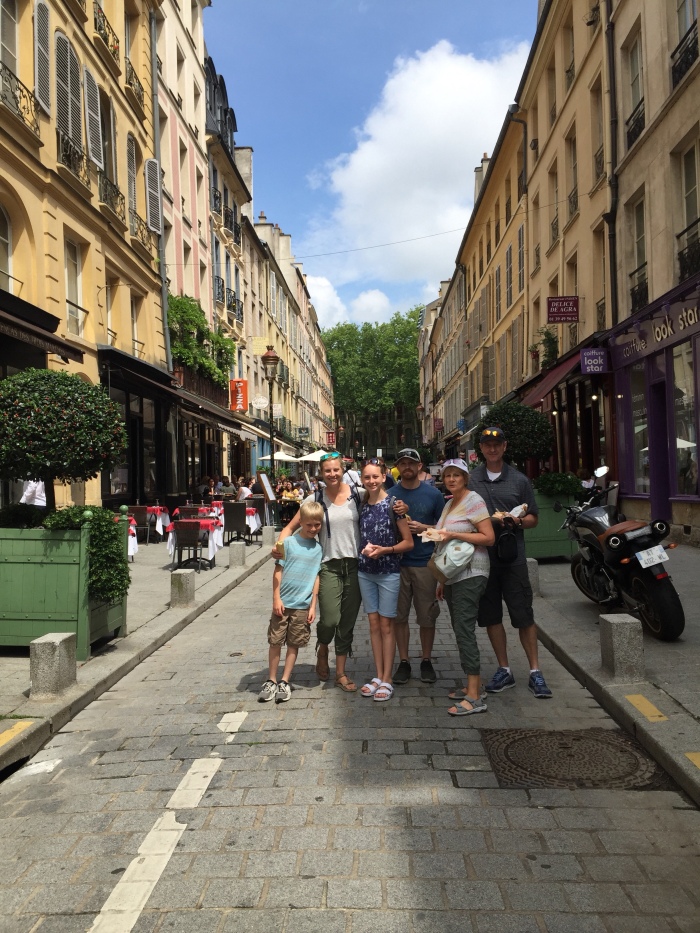 We couldn’t help quoting Hamilton at King Louis Statue. “We signed a treaty with a King whose head in now in a basket. Would you like to take it out and ask it?  Should we honor our treaty King Louis’ head? Uh, do whatever you want, I’m super dead!”

We decided to go to the gardens first and hope for a shorter line into the Chateau later in the afternoon. Best decision ever.  The line later was non existent.
The gardens are quite a marvel. They are so vast! 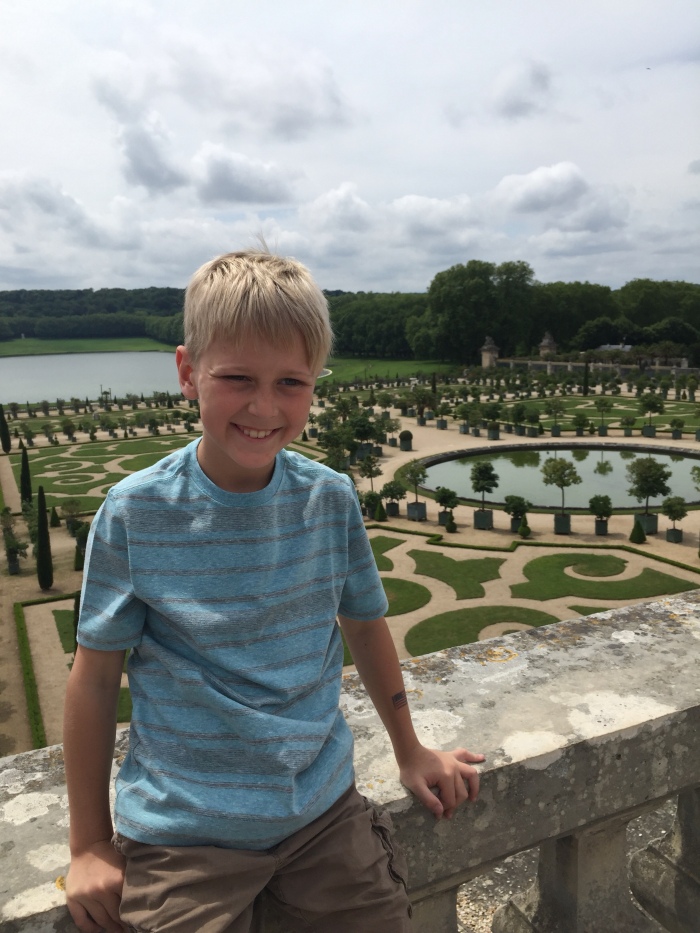 I think our favorite thing in the gardens was getting a glass of freshly squeezed orange juice from oranges grown at Versailles! It was delicious!

Blake loves Michael! And Michael is so patient to put up with being tackled, jabbed and punched. 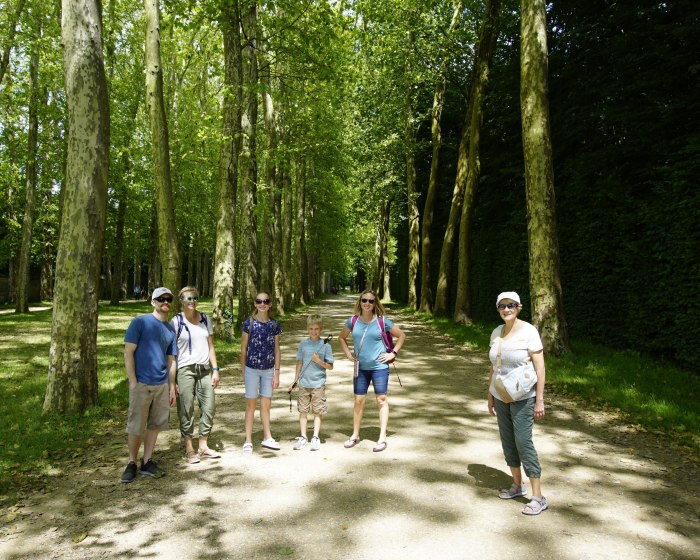 Next we wanted to bike to Marie Antoinette’s Hamlet.Which we assumed would be easy. Which was not easy. We could not find the darn thing! Google maps was leading us all over the place. We spend an hour looking and finally figured out where to go, but we were out of time! Then, on the way back we discovered a road that would take us from the bike shop to the Hamlet in about 5 min. Live and learn. Our bike ride was still a ton of fun. 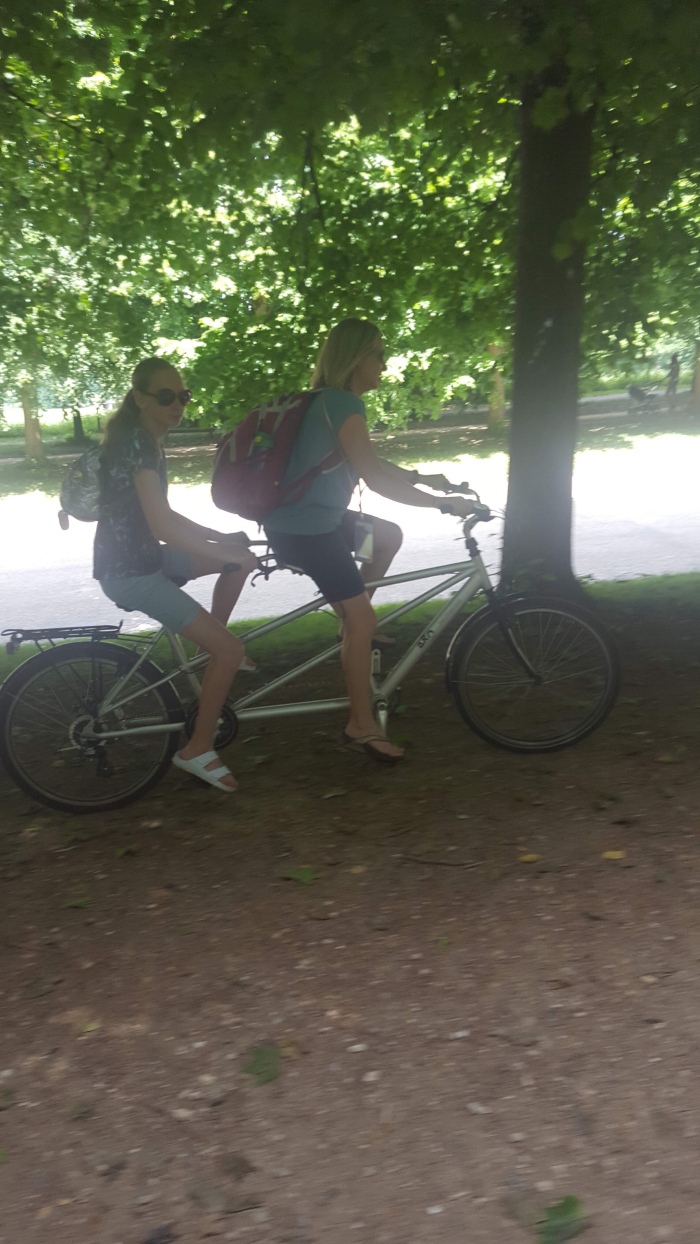 When we got back to the Chateau there was no line at all. Hooray! Our plan worked! I think we loved seeing the portraits with all the wigs and fancy dresses. How did they survive the heat dressed like that?? We also loved that everything was covered in gold.

By the time we were done we practically had the place to ourselves! We got some great pictures at the gate and then rode the train back to Paris for Dinner at ………. 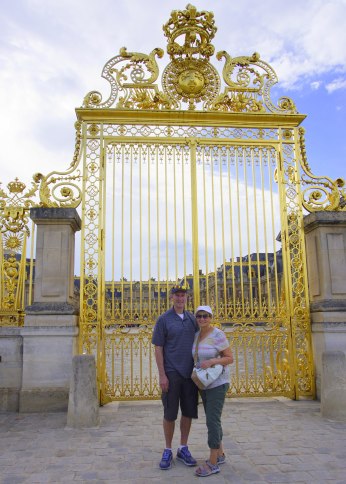 A friend told me it was life changing. I can’t say that I agree with him, but it was a fun, unique place. All they serve is steak and fries. There are no menus and you just tell them how you want your meat cooked. They then bring you a giant plate of steak and fries. The best part? When you are done, they bring you seconds.

By this time Blake could not stand to hold onto his money any longer. So off to the Disney Store we went. He searched for the perfect thing and decided on Huey, Dewey, and Louie Tsum Tsums.

He had also had ENOUGH and told me that this was a dumb trip and that all he got to do was walk and walk and see dumb stuff and NOT HAVE ANY FUN AT ALL. Everyone had to leave us behind while I tried to calm him down on the streets of Paris. He kept running away from me and hiding behind planter boxes much to the amusement of those around me. He finally consented to follow me to the Metro at a distance. Poor kid. He was jet lagged, hungry (because he refused steak and fries) and had walked like 27,000 steps.