So much to see, so much to do, so little time.  The Banks Family is back in NYC!
The kids haven’t been back since our summer in 2012.  My how things change

We started the day down at Madison Park.  The kids were delighted to see no less than 30 squirrels running around in the grass.  It was hilarious.  We stopped for a photo opp at the Flatiron building and then a visit to the Lego store where Blake promptly spent all his souvenir money.  This Lego store is 10 times cooler than the one in Rockefeller Center.

We walked up to Union Square and took a stroll through the farmers market.  It was now lunch time and so we hopped on the Subway and headed for Hell’s Kitchen to introduce the kids to NYC Ramen at Totto’s Kitchen.  The wait was about an hour and a half and when we got inside, we saw why.  It was the tiniest place ever!  There were 2 tables and about 10 seats at the bar.  The ramen was good, but probably not worth that long of a wait. And in a funny twist, as Rusty and I were walking the the Marathon Expo we passed another Totto Ramen about 5 blocks west that was giant and mostly empty.  If we had only known!! 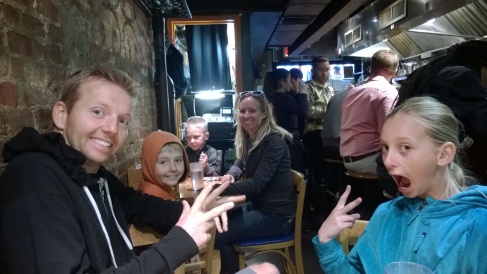 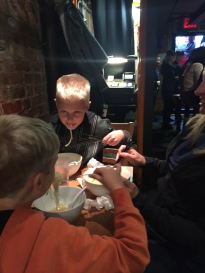 The kids and grandparents rushed off so they wouldn’t be late to Matilda.  The kids have been listening non-stop to the soundtrack and were so excited to go to Broadway!  This was Josh and Blake’s first show in NYC and it was great.  They all had such a fun time.  In the days after the show Grandpa would tease the kids and threaten to throw them in the Chokey.  After one such joke Blake said, “Geez Grandpa, you are OBSESSED with the Chokey.”  We couldn’t stop laughing.

Rusty and I hit up the Marathon Expo at the Javits Center to get our shirts and bibs.  And I got suckered into waiting in a 45 min line to purchase a $20 t-shirt 🙂

The James Blake Foundation was holding a dinner at Mercer Kitchen for all the members of our charity team.  It was really great to meet other team members and fuel up with some pasta. We are really grateful for the opportunity to be part of this team and to raise money for such an important cause.  Our team raised a total of $63,626.  That is amazing!  James sent us an email just before the race.

After the dinner ended we met up with everyone else at the American Girl Store.  Halle is miss money bags these days with all her babysitting and she decided to get a special new doll.  Meet Samantha:

I never want her to grow up!  I refuse to believe that in a mere matter of days she will be a teenager!

We headed back to the hotel early so we could get all our marathon prep done and hit the hay.  The kids all stayed in Grandpa and Grandma’s room so we could wake up early and get ready without disturbing their sleep.  Marathon, here we come!