On our run this morning I discovered one of my favorite pieces of street art EVER. Afternoon at Dolores Park.  How great is this?

Rusty had a work day so the kids and I made our way back to Chinatown in search of the Golden Gate Fortune Cookie Factory.  On the way there Josh’s attention was grabbed by a sign at L&L BBQ advertising a Ramen Burger.  We simply had to try.  And it was way yummy.  We snarfed it down in no time flat.

Google maps led us to a tiny back alleyway to an itty bitty shop.  (We learned later that this was one of the oldest streets in San Francisco) We had arrived.  There were no formal tours but we stood in line, wrote our own fortunes in a piece of paper and watched as they were made into cookies.  It was interesting to watch the process, which is surprisingly still very manual.  We brought our cookies home with us, mixed them up and then each chose and opened a fortune.  It was hilarious to see what everyone got. 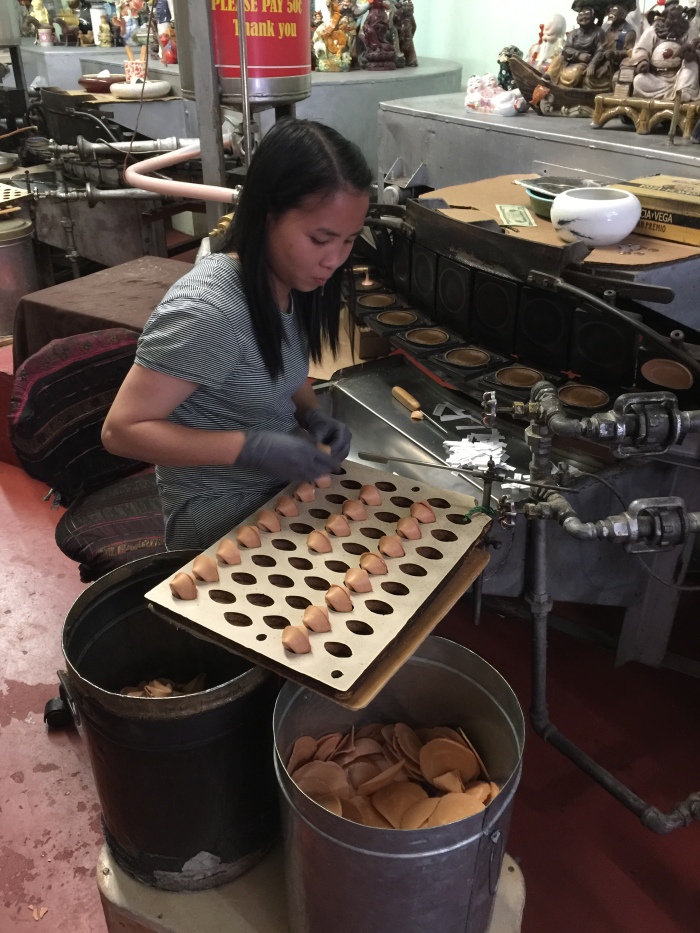 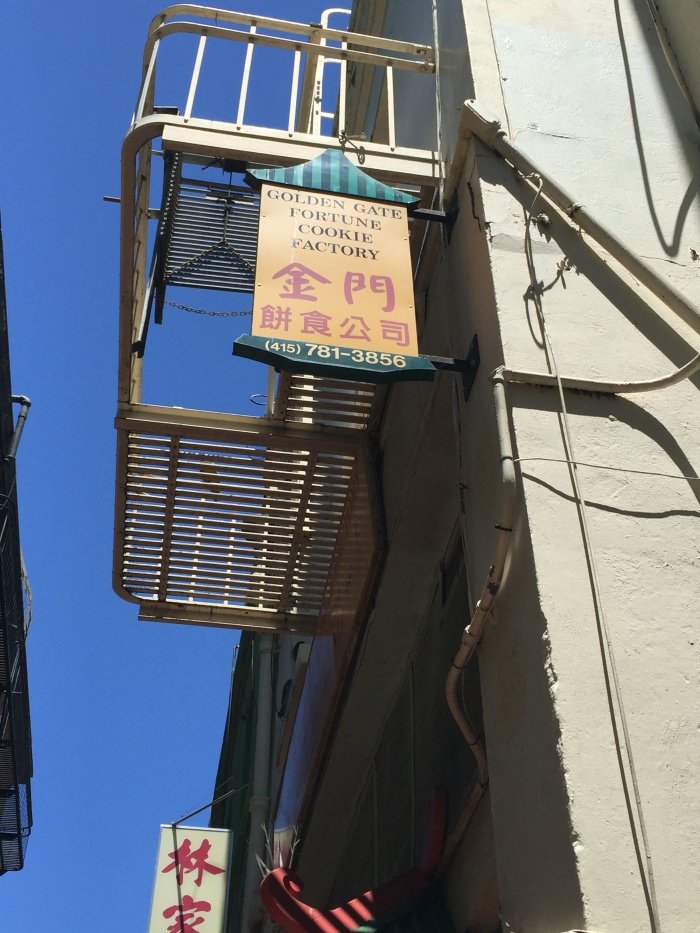 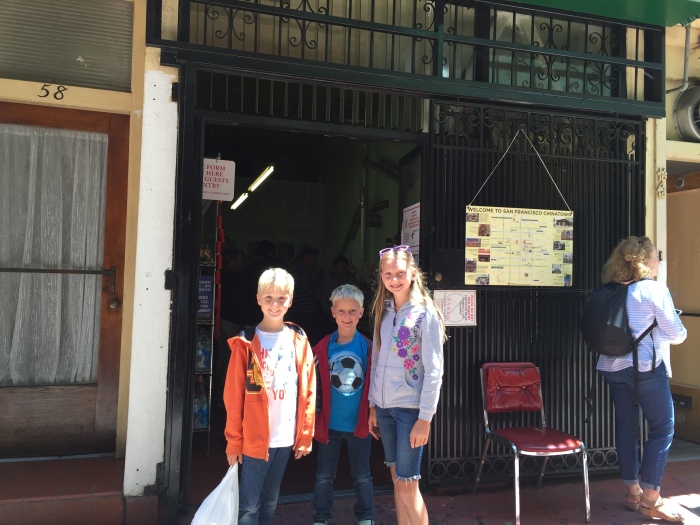 Halle was promised the pet of her dreams. (Written by Blake) 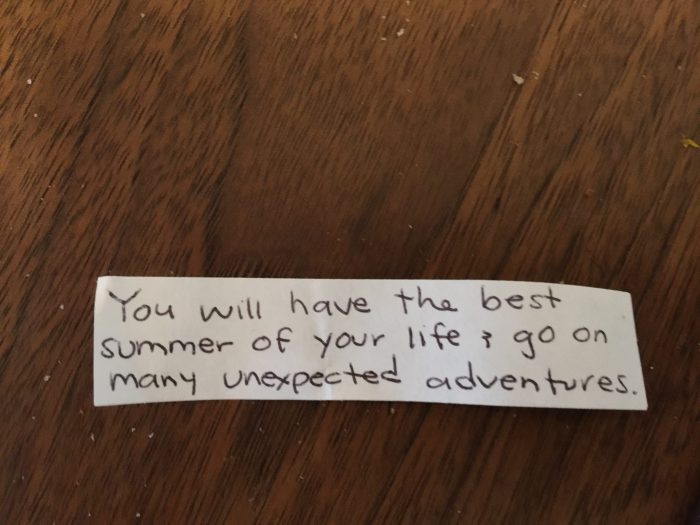 Blake’s foretold a bang on the head in the near future (Written by Halle).  It came true only a few hours later when he slammed headfirst into the couch. 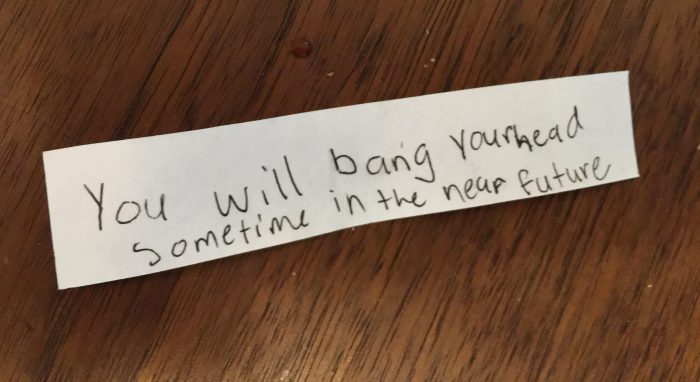 Next we made our way to the Cable Car Museum.  It was fascinating to learn how they work and to see the cables running under the ground. The craziest thing we learned is that the cars have wooden brakes that have to be replaced every 2-4 days! 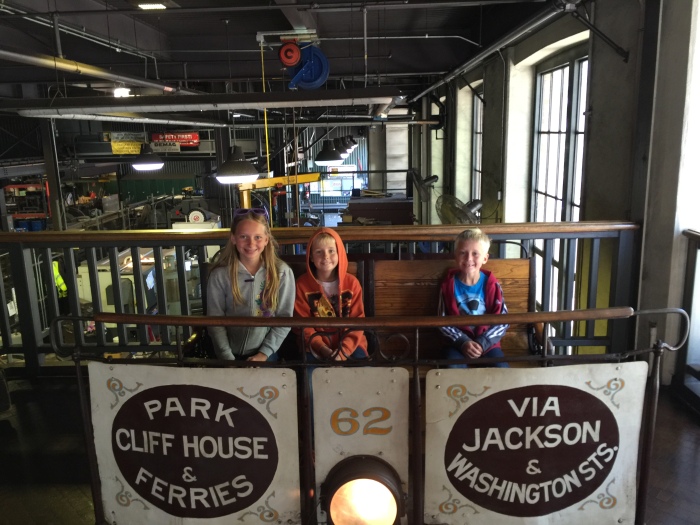 We then walked down to catch a ride.  Or should I say, down and up, up and down.  The hills here are so crazy I still can’t believe it. 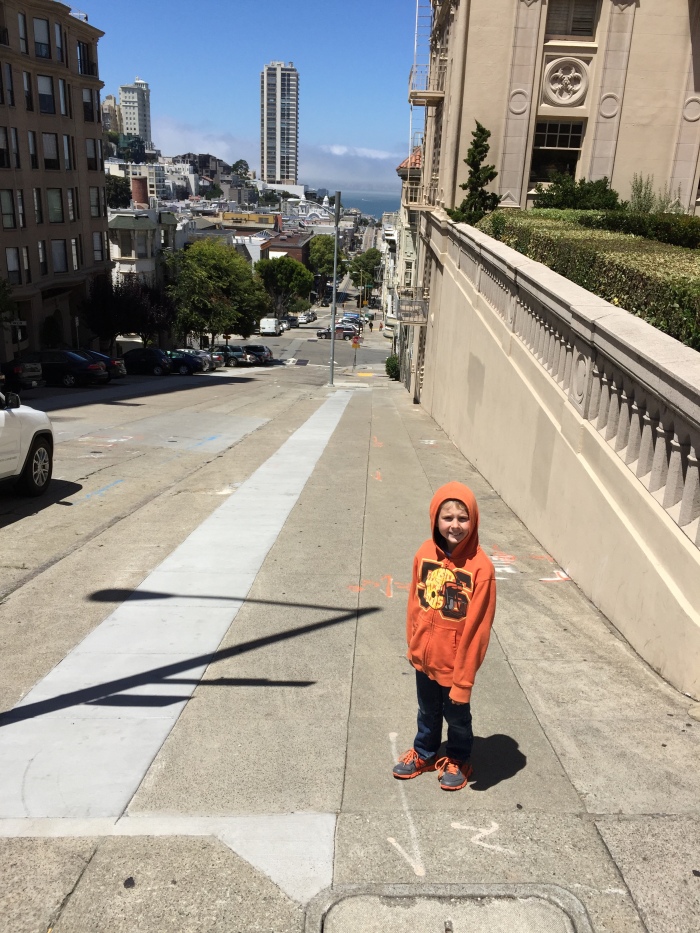 We were a little disappointed not to get a spot on the outside to hang on and see the views.  We were very crowded in the middle of the car.  Blake promptly fell asleep.  Halle calls the hills “belly droppers” and sometimes it feels like you are on a rollercoaster and there is no way the car is going to be able to stop at the bottom of the hill before the red light. At end of our ride a very nice conductor snapped some cute pics.  He was a pro!  I’m sure he gets asked to do like like 1000 times a day. 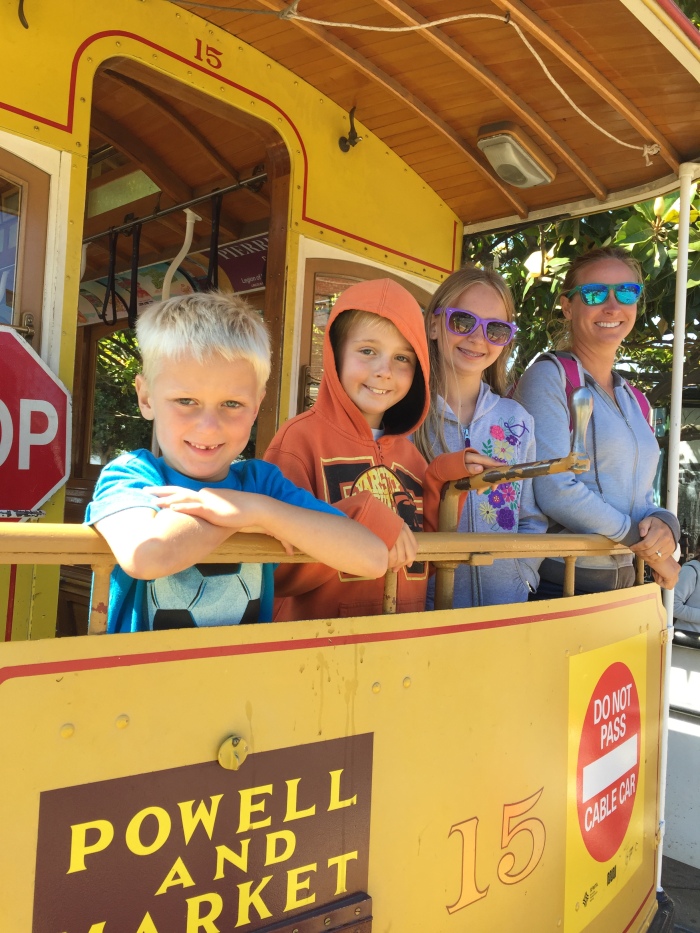 The end of the line is right near Ghiradhelli Square so we stopped in for a delicious banana split.  I think it took all of about 4 minutes to inhale the whole thing.  Blake and Halle were supposed to split the cherry on top but Blake popped the whole thing in his mouth and claimed he was trying to only eat 1/2 but it was just too hard 🙂 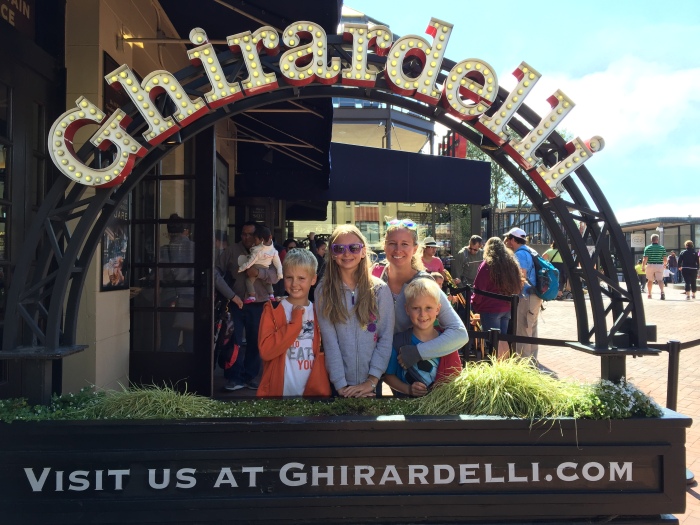 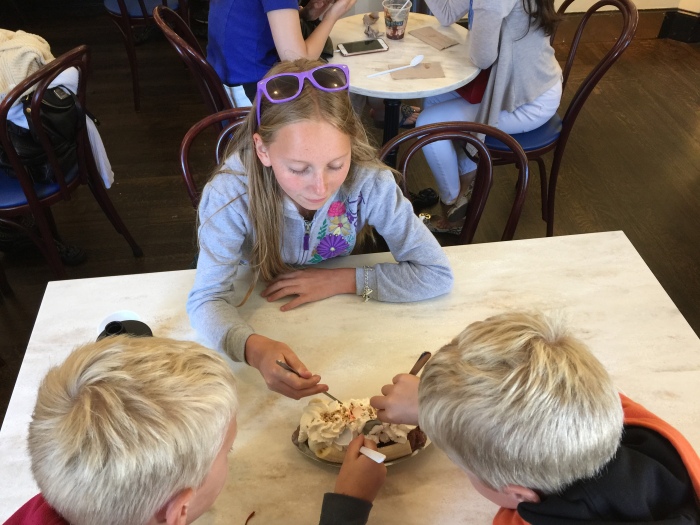 Lombard street, famed for being the crookedest street in SF was only a few blocks away so we went to check it out.  Turns out it was a few blocks straight up into the sky.  We are all going to have calves of steel by Aug!  Blake was getting tired so he used his jacket like reins around my waist and I pulled him up the hill. 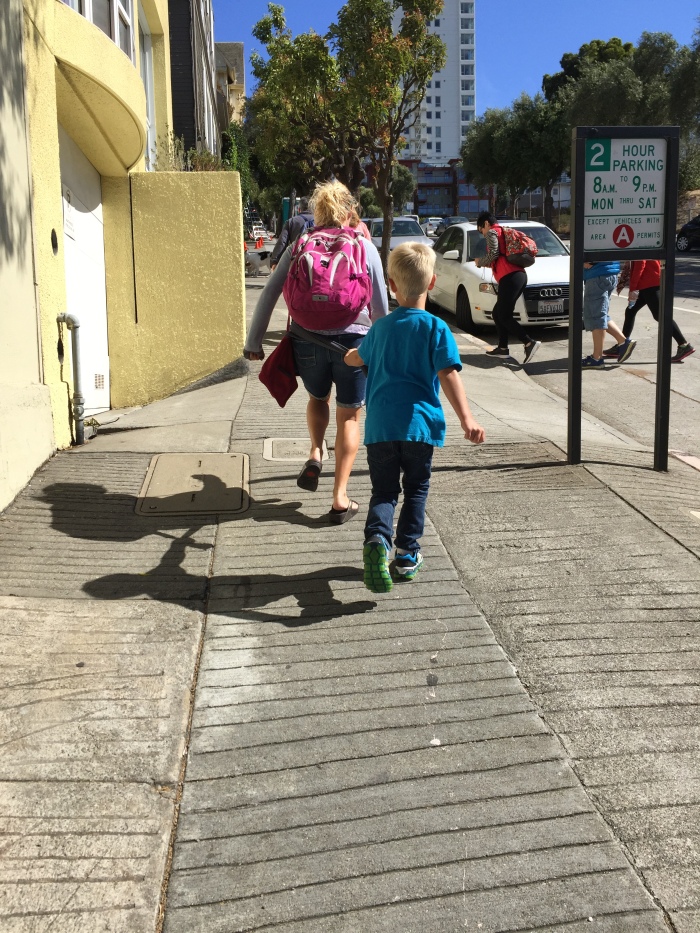 The street was so fun and crazy.  The kids had a great time imagining what it would be like to live there and to navigate all the traffic down your street every day. 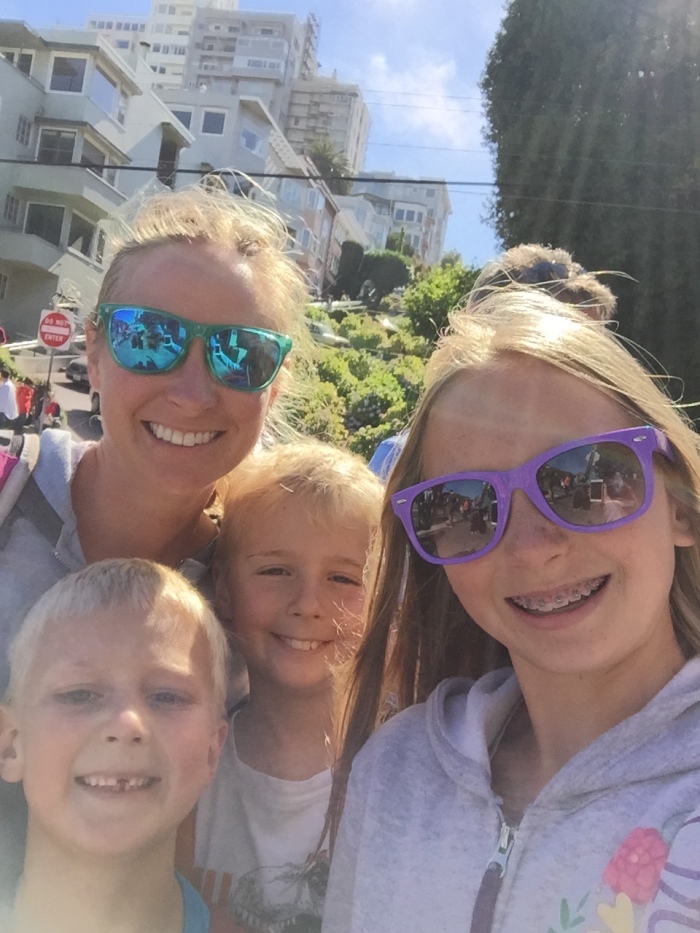 By this time we were beat.  We headed home to enjoy a little downtime.  We’ve been watching Full House with the kids and they love it.  Josh and Blake belly laugh the whole time.