After a few more hours of fun on the Autobahn, we made it to Nuremburg.  We first made a visit to the Dokumentationszentrum Reichsparteitagsgelände (Documentation Center Nazi Party Rally Grounds).  There was an English audio tour that went along with the museum, and it was fascinating.  The museum explores the causes and consequences of Nazi Germany.  We saw pictures of the massive Nazi rallies, and watched snippints of Leni Riefenstahl’s Triumph of the Will.”  Nazi Germany is a terrifying, fascinating subject and although the museum was very informative, I was kind of glad to leave it behind.  It is such a dark period and I could really feel that while we were there.
We then went to Nuremberg castle.  We saw a fun exhibit on armour, and climbed the Sinwell Tower, which is one of the only remaining original structures after Nuremberg was bombed in WWII. Up in the tower there were lots of old photos of the city before and then right after the bombing.  The devastation was unreal.  It’s a huge feat that Germany has rebuilt as well as it has.  What a massive undertaking.  (Can I apologize now—Rusty’s phone was the only one with international data, so consequently, I didn’t pull mine out a lot.  Which means there are a disproportionate amount of pics of me)

My favorite part of Nuremberg was the farmers market we visited.  It was so cute.  All the tents were red and white striped and the market was situated in a huge town square nestled between some fabulous churches.  Can I just say how much I love the gothic architecture in Germany?  Amazing. Rusty had his first of what turned out to be MANY fresh squeezed Orange Juices, and I had my favorite thing I ate in Germany—sausage on a roll with the most delicious mustard I have ever had.  My mouth waters just thinking about it!

And Lebkuchen! (Gingerbread) On Danny’s recommendation we bought some of this delicious treat. We walked out of the store, each had a piece, and promptly turned back around and bought more.  This is me the second time in the shop.  The cashiers thought it was pretty funny.

Now on to Regensburg.  This was a beautiful town also dating back to the middle ages. But this one felt as if people actually lived and worked here.
The Steinerne Brücke (Stone Bridge) is a 12th century bridge that spans the Danube and leads into old town.  It was beautiful!

We made our first phone call to the kids while sitting outside this massive cathedral.  But that wasn’t my favorite church in Regensburg.

Alte Kapelle.  Thanks, Trip Advisor, for the tip!
The outside is so unassuming that you’d never guess what beauty was inside.

The rococo style interior absolutely took my breath away.  When we first entered the church we were in a little side chapel.  It was nice, but we really had no idea what we were looking for.  There were a lot of people praying and we didn’t want to disturb anyone by asking, “Is this all?!?”  We took a chance on a back door, and as we entered the sanctuary my jaw hit the floor.  I think this is my favorite church EVER.  Unfortunately, it’s only open during services so we were left to gaze through the iron gates at the splendor. 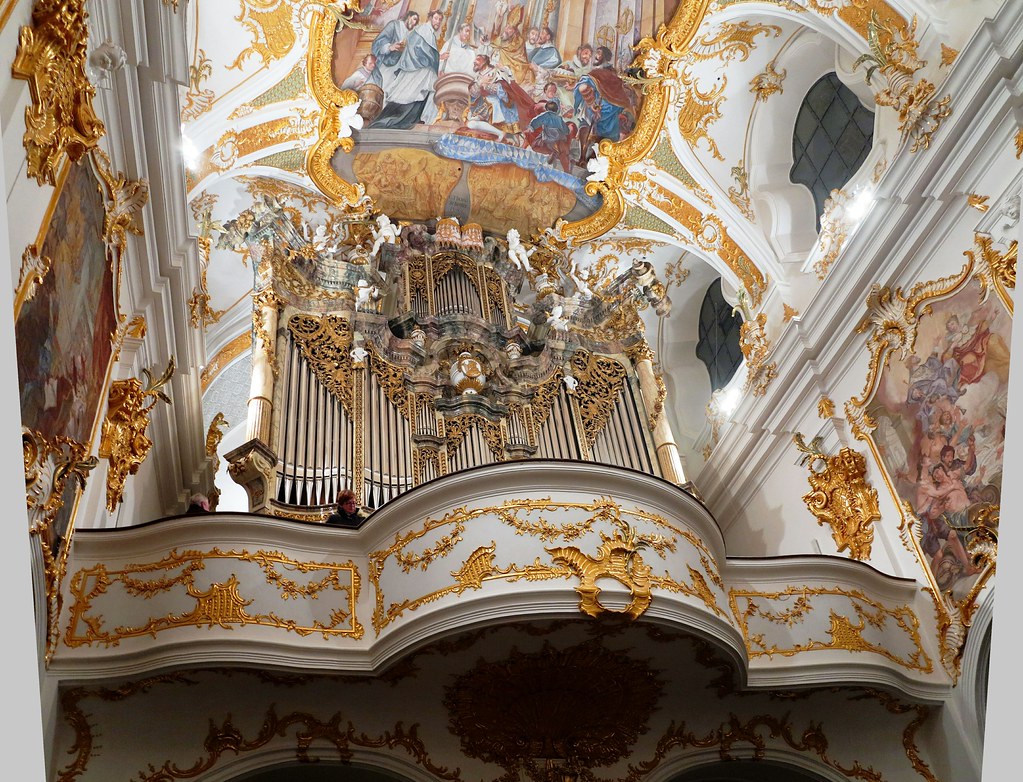 We ate dinner by the river at a restaurant that has a kitchen that’s been operating since 900 AD.  That’s OLD!  Historische Wurstkuche (historical sausage kitchen).  Sausage and sour kraut were great.  Bread was pretty gross.  It just sits in baskets on the table all day and then you pay for how many pieces you eat.

Thus ended our adventure in Regensburg.  Off to Salzburg we go!  (The three hour drive was pretty looong after our busy day.)