This weekend marked an annual LDS tradition– the Father’s and Sons camp out. Rusty, earning Father of the Year, decided he would take Josh. Since the boys were going to be doing “boy” stuff, Halle and I decided to go do “girl” stuff. I tried to convince her to go shopping at the mall, but she wanted to see a movie. So we met Rusty in Boulder and he and Josh headed to Nederland for their camping adventure. Josh won the youngest camper award, and he had a great time! They got to play on 4-wheelers, or “tractors” as Josh calls them, sit around the campfire, and have a yummy breakfast the next morning. It was Josh’s first time not sleeping in some sort of crib device, and although it took a few tries to get him to go to sleep, Rusty said he did pretty well.
With the boys gone Halle and I went out to dinner. We both LOVE going out to eat. I don’t know why, but I was really in the mood for a hamburger, which I really never eat, so we went to Island Burgers. BIG MISTAKE. Tasted good going down, but not so good coming back up–but we’ll get to that part in a minute. We then headed to the movie theater to see WALL-E. BORING. Halle was really restless and kept saying she was tired. All of the sudden she started coughing, and I knew what was coming next. I picked her up and RAN down the theater steps. We made it down the stairs before she threw up. She then threw up in the garbage can in the hall, and out the car window on the way home. I followed suit shortly. We’re glad the boys had fun, but us girls get to try again! 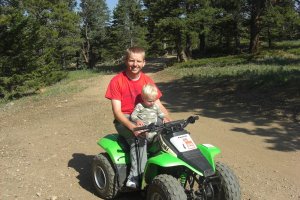