Our last day in Munich started with us cooking breakfast in the Guest Kitchen. This was such a fun feature of our hotel! We were all ready for a break from bread so we had scrambled eggs, kartofulpoffer, fresh berries and juice. It was protein heaven for our carb soaked bodies. 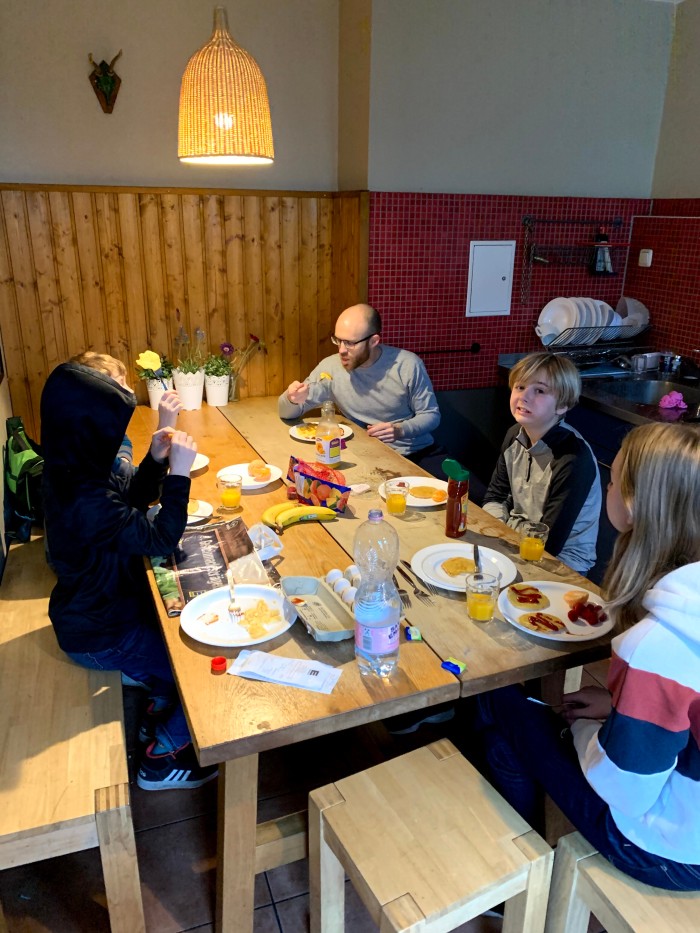 We stopped to show the kids the gaudy Asamkirche. And now I’d like to introduce you to a game we liked to play on the trip.  Just from the back of the head you must guess, is it Grandma, or Josh? We have laughed and laughed about this. 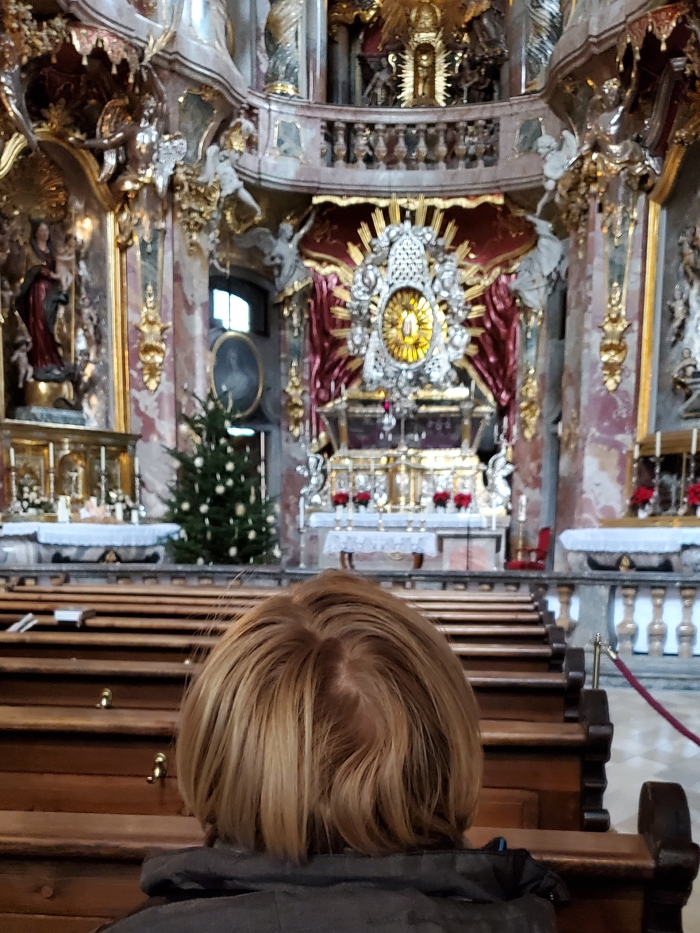 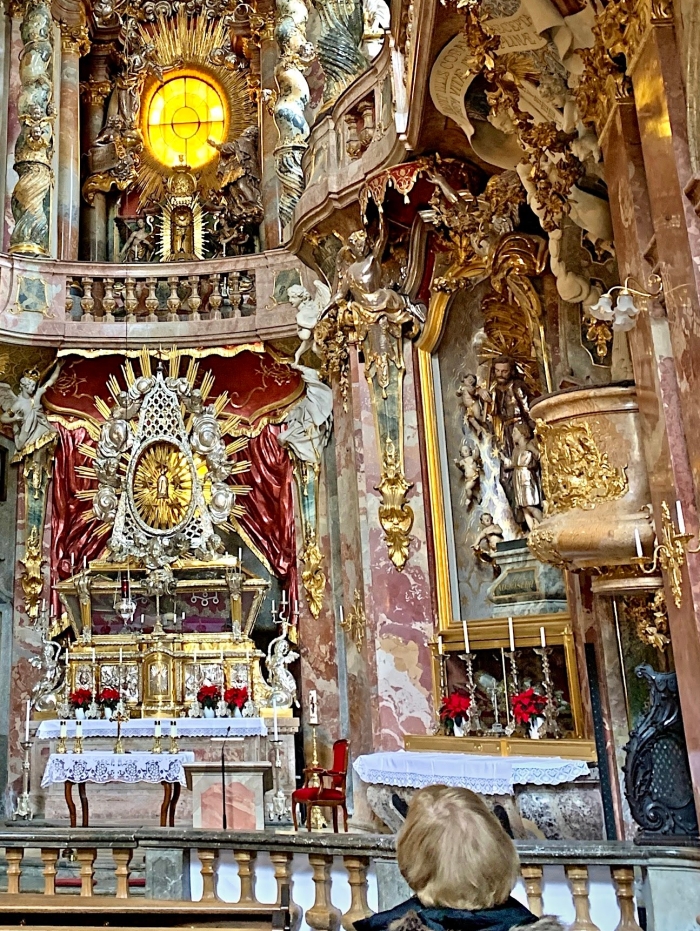 Now back to Marienplatz to see the glockenspiel chime. It’s just so darn cute! There was no one up on St Peter’s tower so Nat and Michael made a beeline up the stairs and watched the chimes from the rooftop. So cool! 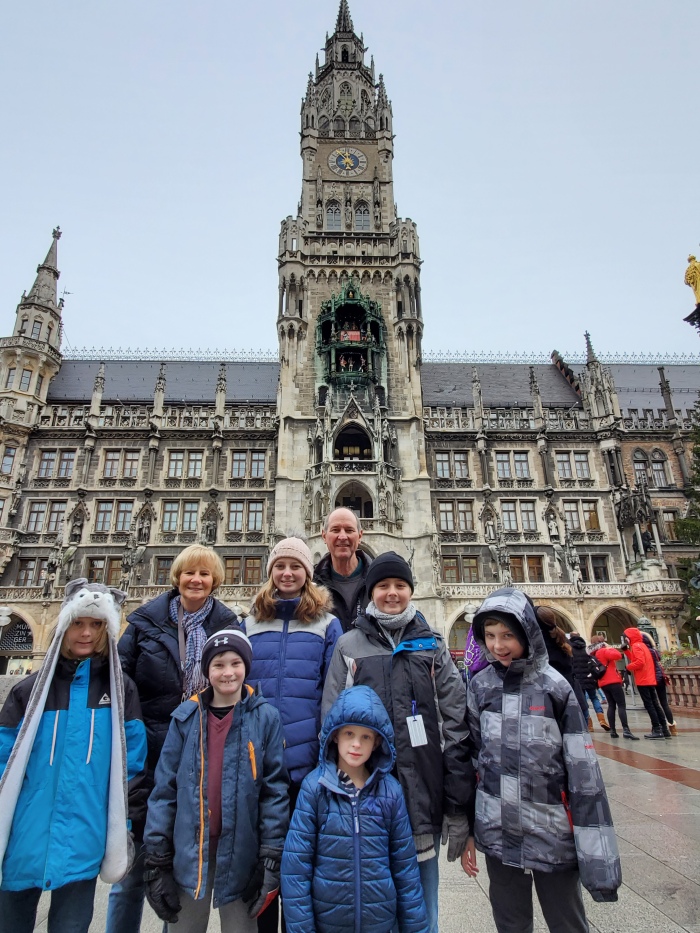 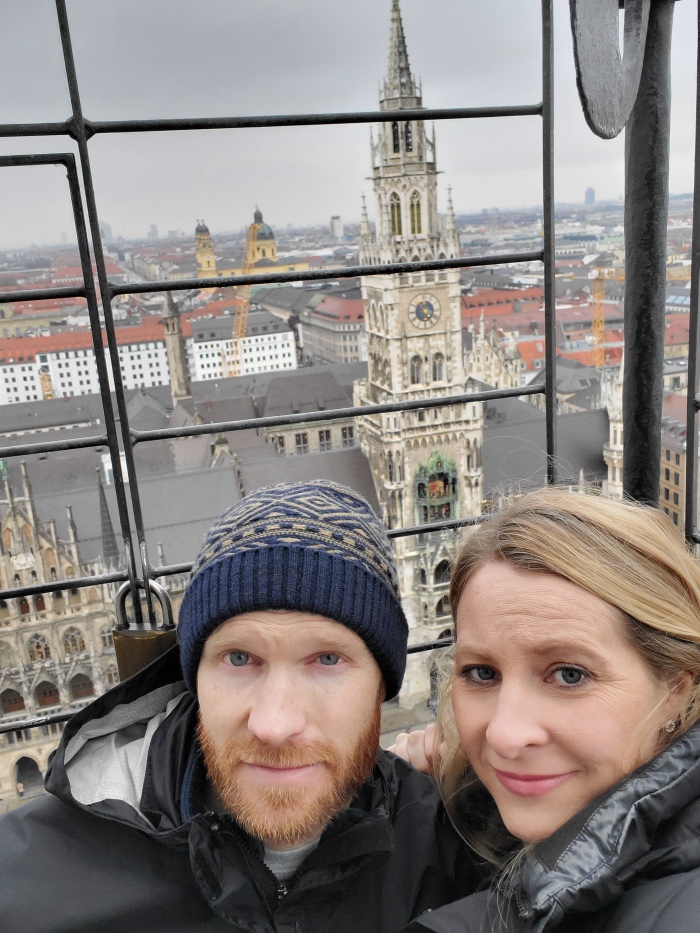 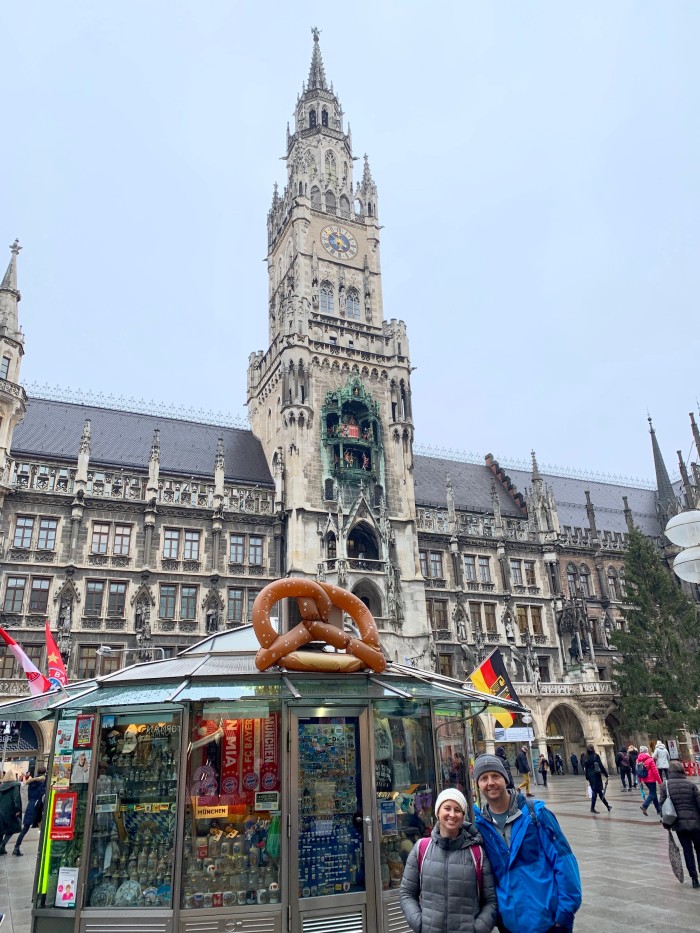 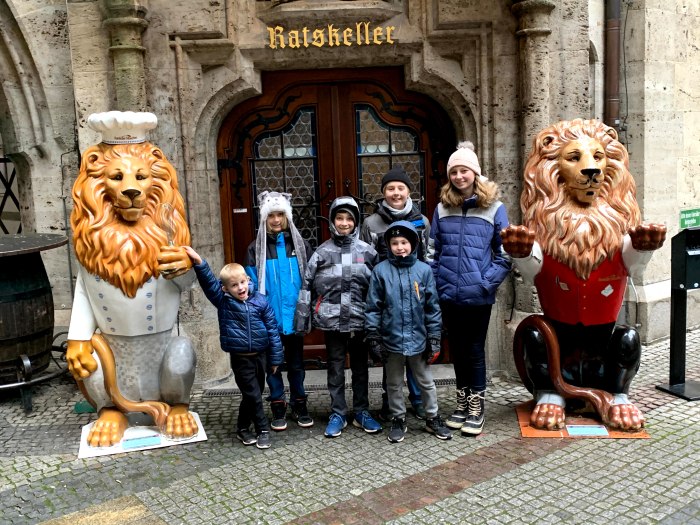 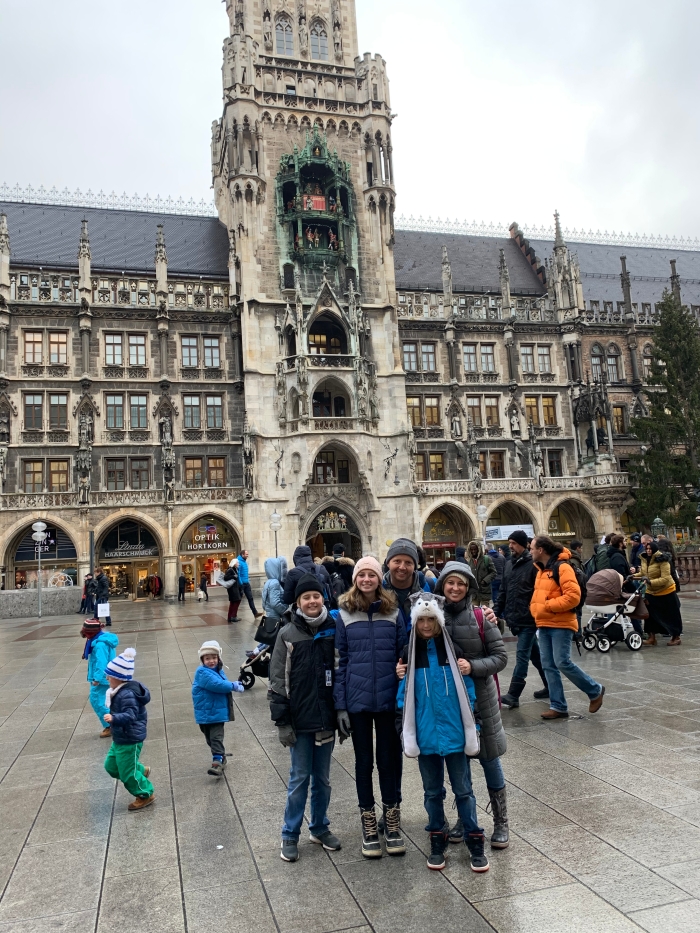 After a hectic bathroom break we realized we couldn’t find Leo. We split up and ran in two directions back to the bathroom. He was standing there exactly like we’d told him to do. He was a little shaken, but luckily we found him really quickly.

We went to the Viktualienmarkt for lunch. Or the Alien Market, as we like to call it. The kids got fresh juice and grilled cheese sandwiches and we ate in the misty rain. 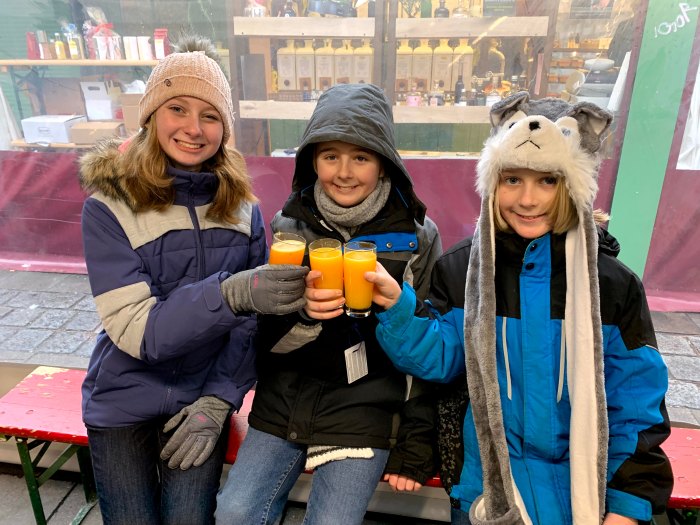 We hopped a train to Obletter toy shop. The kids wandered and played and I had a nap 😴. 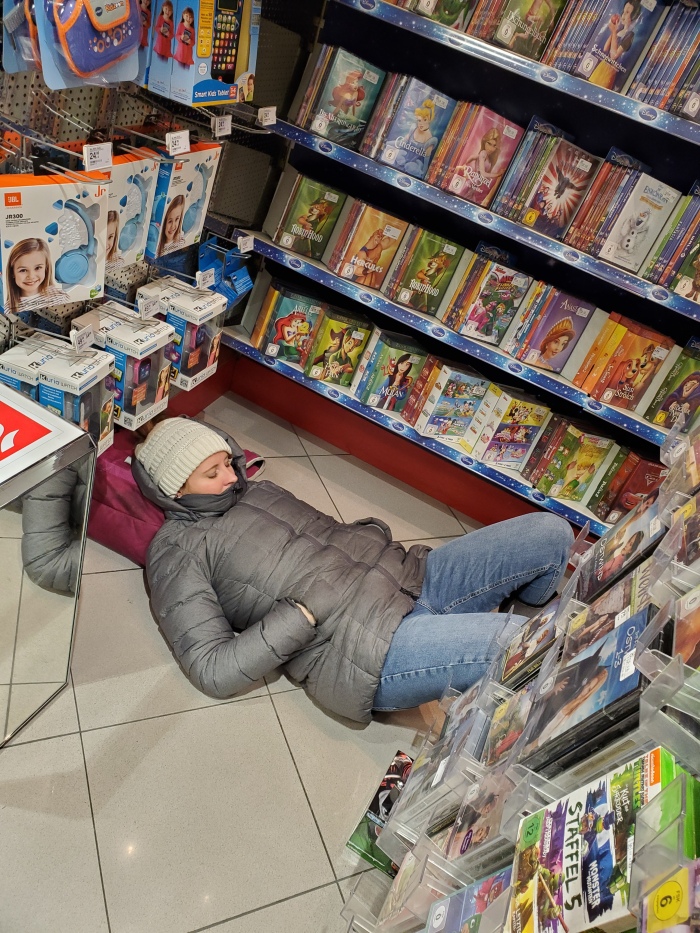 The Residenz was next on our list. It took us about 29 min to figure out where the darn  entrance was.  It was not intuitive. This place was cool! More than 90% was destroyed in WWII, but they’ve reconstructed it through the years. My favorite was the Rococo section. Halle really loved the Residenz–she said it was one of her favorite things. 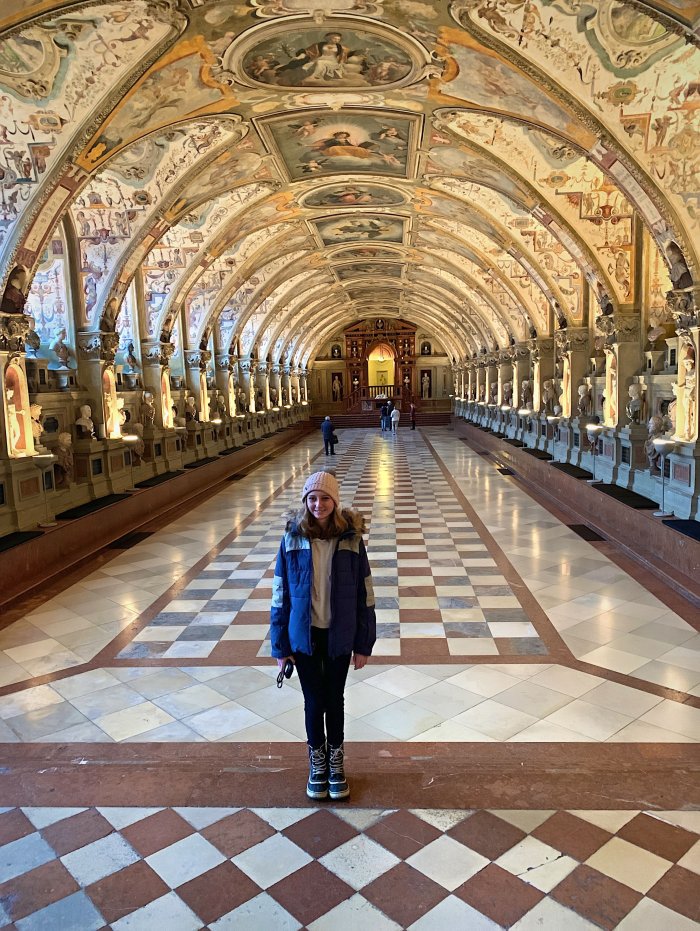 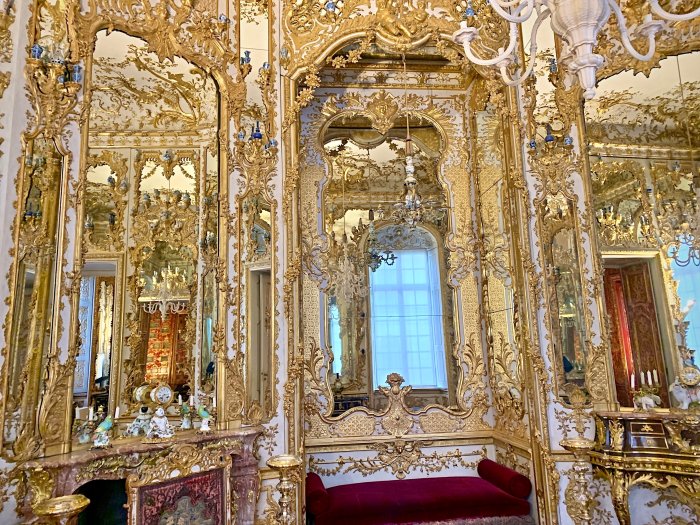 Josh and Rusty opted out and went souvenir shopping instead. Josh found a really cool München hoodie and FINALLY they saw an orange juice machine. We were afraid we weren’t going to find on on the trip! They got snacks and Fantas for all of us to share and we ate them between the Lion statutes on Odeonsplatz. 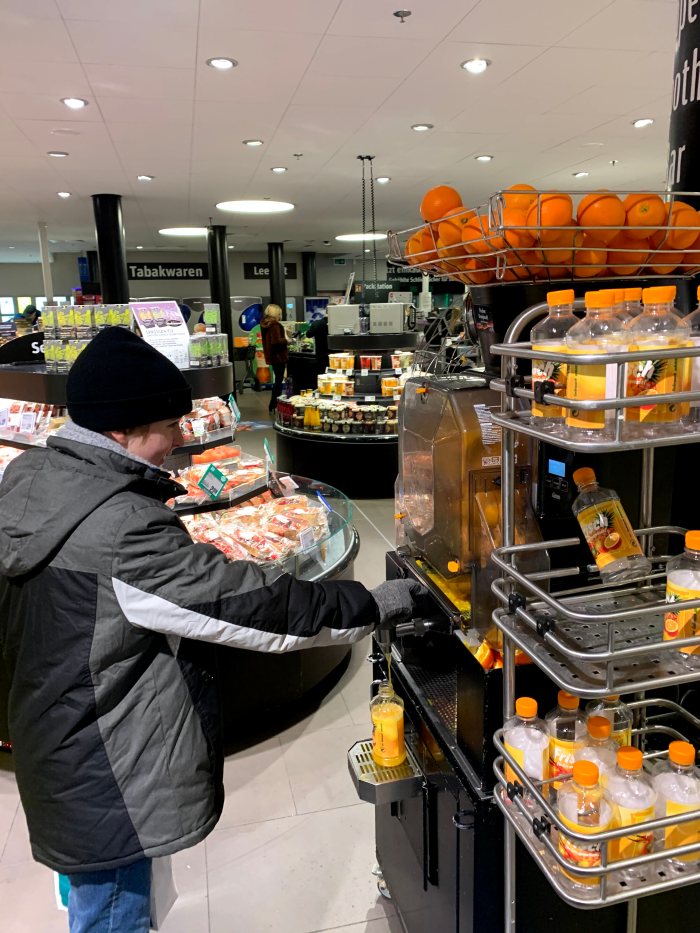 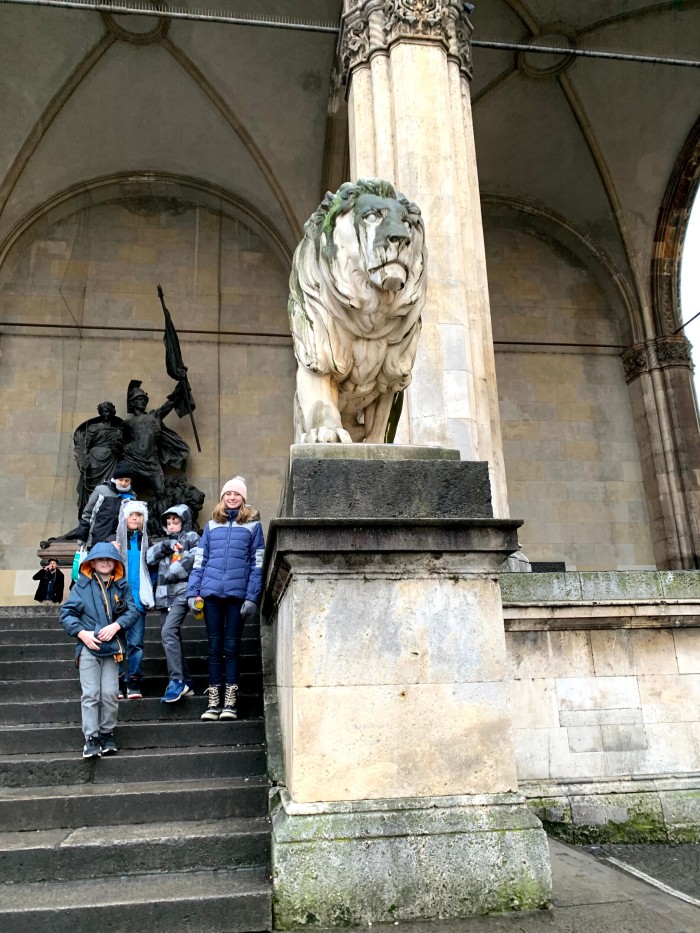 Everyone’s feet were barking by this point and so Blake got a piggyback into the English Gardens to see the surfers at the Eisbachwelle. This is even more impressive in the winter. Burrrr! 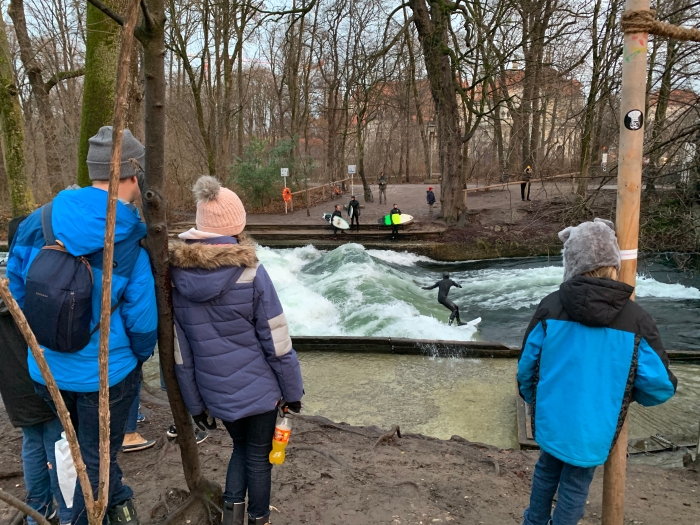 Now it was time for our last adventure. Through random chance we’d discovered that there were 4 story slides inside the Math building at Technical University of Munich. It was about a 39 min train ride North of the City but we were leaving no card unturned today. And the train dropped us practically at the door of the building. These slides were so fun. It was one of those unexpected discoveries that make traveling such a fun adventure. The slides were commissioned as public art and are shaped like a parabola. We grabbed our mats and ran up the stairs to the top. Blake and I went together his first time because he was a little unsure, but after that he was wizzing on his own. After about 4 times up the stairs we gratefully discovered the elevator. Josh had an ingenious system worked out. He’d go up the elevator then immediately push the button to send it back to the ground floor. He’s hop in the slide and when he was done the elevator would be waiting for him at the bottom to rush him to the top again. We had all kinds of races while students hung out and studied around us. Rusty says every time he’s on a college campus he wishes he was back at school again. He said he didn’t appreciate the glamour of college life at the time. 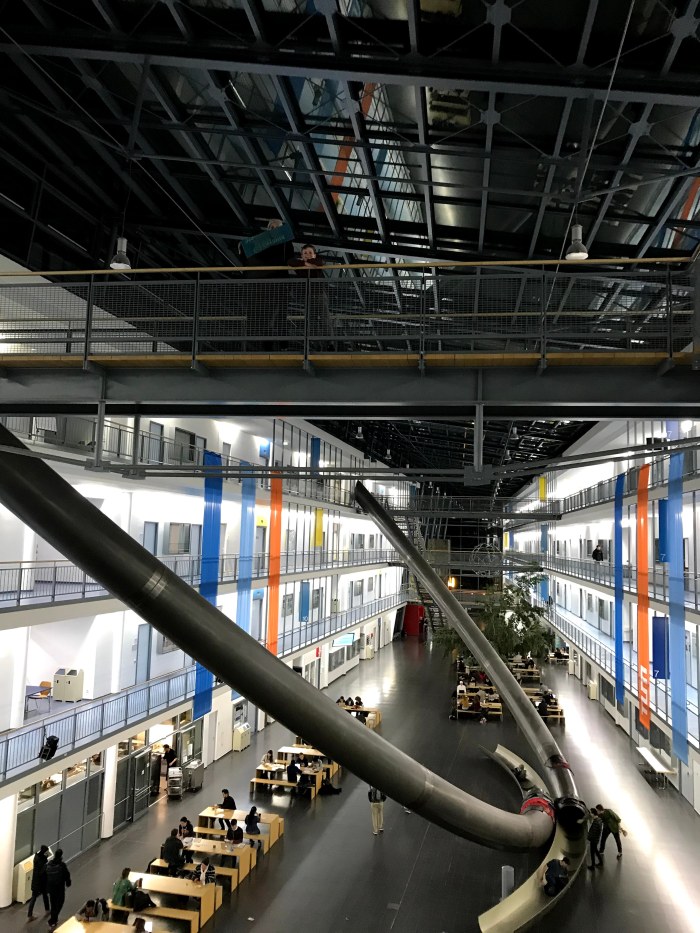 Our final stop in Munich was the famous Hofbrauhaus beer hall. I wasn’t sure I’d really like this, but I really did! We ordered sausages and sauerkraut and pretzels as big as our heads! We had apple strudel and Kaisersch….for dessert with an oompah band played on the stage. It was a perfect ending to our Germany adventure. 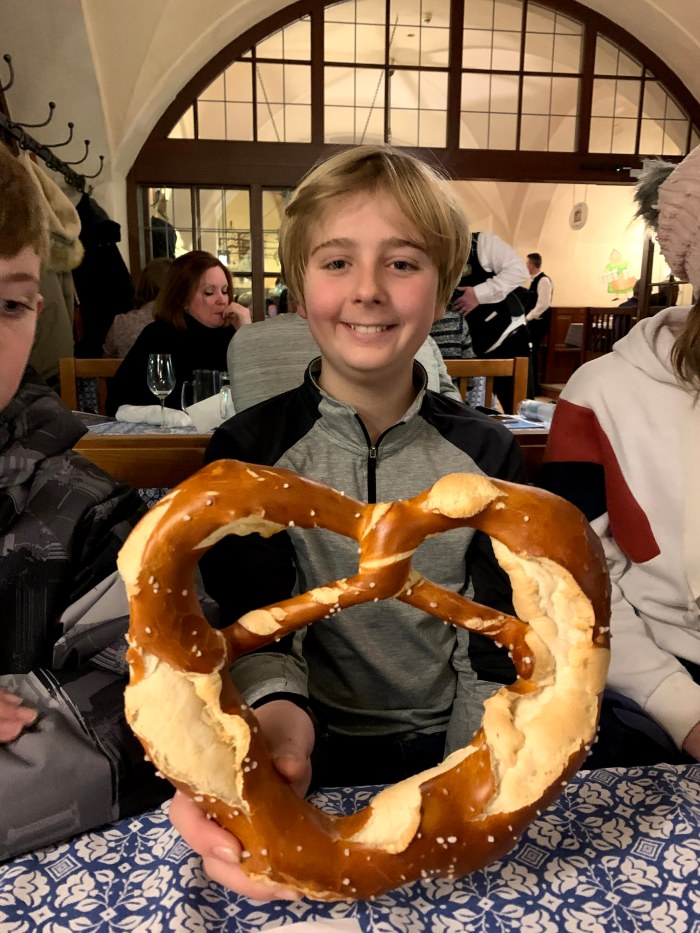 After getting up at 4:30am this morning we are on the last two hours of our flight home. We flew from Munich to Heathrow and now Heathrow to Denver. Love spending time with my family and I’m pretty proud of the way we held it all together and let the small stuff go. It wasn’t without its hard moments but we made it through without any major emotional breakdowns and I consider that a big win! Memories were made that will last a lifetime. Halle, Josh, Blake and Rusty are such fun travel partners and it’s even better when G&G and cousins are involved. Blake said he wasn’t super sad to leave Germany but he was super super sad to leave his cousins. Family is everything.