We woke up early in hopes of being the first people on the tram to the top of Zugspitze, Germany’s tallest mountain. We made it just in time to jump on the tram and head up the mountain.  This was one of the most expensive things we did and I was really on the fence about spending all the money.  But I’m sure glad we did!  It makes the Trip Top 3 for sure.  Even though this mountain is much, much smaller than many we have hiked or driven in Colorado, the sheer cliffs and the vast wide open spaces made it feel completely different.  I think we both had a little vertigo at the top.  The views reached in all directions and all you could see was mountain after mountain after mountain.

Rusty decided to hike to the summit. It was only about 1/2 mile, but it was crazy!  He was climbing up metal latter rungs that were drilled straight into the side of the mountain.  I am usually up for any adventure, but my choice of footwear that morning and my dizzy brain kept my two feet planted on solid ground.  He said it was a hairy climb, but totally worth it!

That tiny purple person is me, safely on the platform

I have to admit, I was pretty glad when Rusty made it back alive.

Now on to the German tourist attraction extraordinaire—Neuschwanstein Castle.  Again….lots of driving, lots of traffic.  When we got there we went to stand in the ticket line.  It was insanely long, and there were electronic boards updating the next available tour times.  Well….these times were 4-5 hours away so we elected to just walk to Mary’s Bridge for the great views and then just walk around the outside of the castle instead of touring inside.  There was a sign warning visitors how steep the hike was to the bridge.  We laughed a bit and thought the sign was for liability and probably wasn’t too bad.  It was.  It was so steep!  We were huffing and puffing all the way to the top.  But oh…the top.  What a magnificent site.  If Ludwig II was crazy, I want some of his pills.  This place was incredible.  Like, cannot even believe that this was possible 100’s of years ago.

Up next?  More driving.  We are so so glad we got a car for this trip.  Trains would have been fun, but we spent a lot of time in the car and it was nice to do it on our own terms.  On our way to Munich we drove by several strawberry fields.  At the corners of the fields were stands shaped like strawberries where farmers could sell their fruit.  It was so cute! (Thanks again google, for the pic) 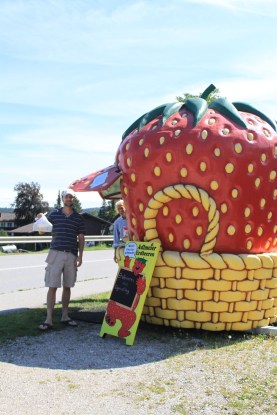 We stopped at a grocery store to pick up chocolate and Haribo gummies for the kids.  And Rusty got another OJ.  He is really hoping Whole Foods gets one of these juicing machines. We also picked up some of those delicious strawberries.  Strawberries and German Chocolate make a perfect snacking combination.

FINALLY….MUNICH! We were staying in a Hilton hotel which meant Air Conditioning. And Ice. And normal pillows.  Oh happy, happy day.  I’ve never been so happy to see an ice machine in all my life.  Why has ice not caught on in Europe?

We had heard good things about the Deutsche Museum, which is the world’s largest science and technology museum.  That sounded like something we’d be interested in.  Turns out, it wasn’t.  We give it a “Meh.”

But, we did find an awesome souvenir for Josh.  It’s called Der Stern, and it’s a star shaped toy that can bend and flex into a million other things.  He loves it.

We spent the evening milling around and enjoying the city.  I cannot tell you how much I love this city.  It is classy, clean, friendly, and so much fun.  I did not expect to fall so hard in love with Munich.  But I did.  One of our favorite things we saw that evening were the surfers in the Eisbach, a small channel of the Isar river that runs through the English Garden (Munich’s biggest city park)  What fun! 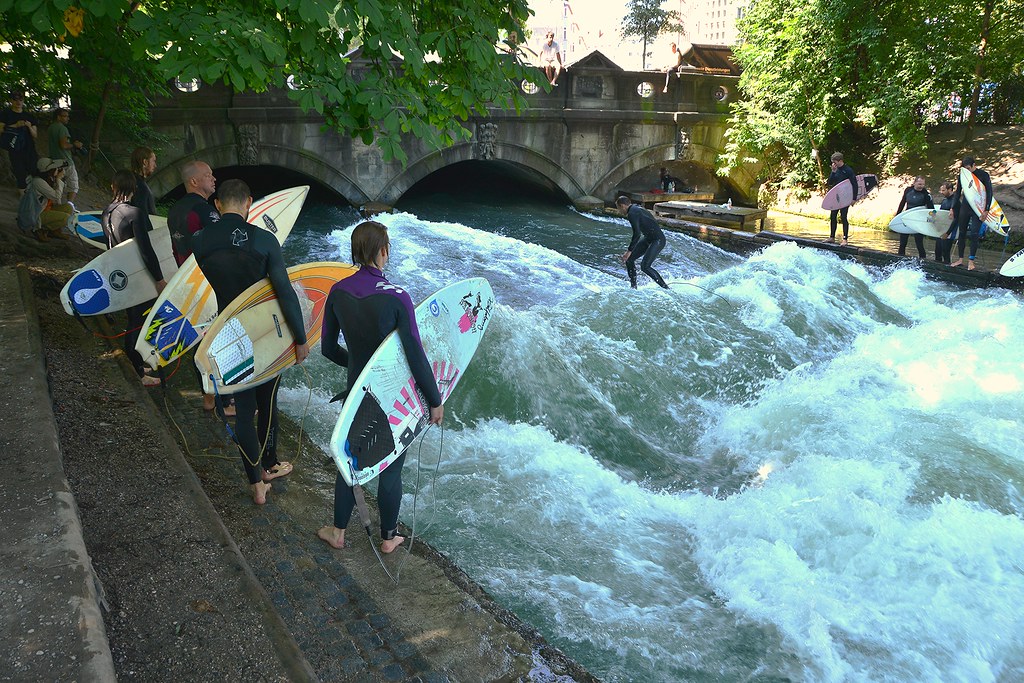 Another cool thing about Germany is that you are seated with different people if the restaurant is busy.  We ate dinner at Andechser am Dom (my favorite restaurant we ate at in Munich) with a Dad and his daughter who were touring Europe for her College graduation present.  It was lots of fun!  And I finally got to try pig knuckle.  Sounds gross, tastes delicious.

And the thing I love best about cities?  All the totally random stuff you find.  We saw weird lights and music coming from one of the churches and stumbled into a modern art exhibit called “Clouds”  There were big bean bag pillows all over the floor of the church and people sat there staring up into the “clouds.”  There was music playing the the clouds would go from red to blue to yellow to orange to black to represent the different parts of the day.  It was pretty amazing! 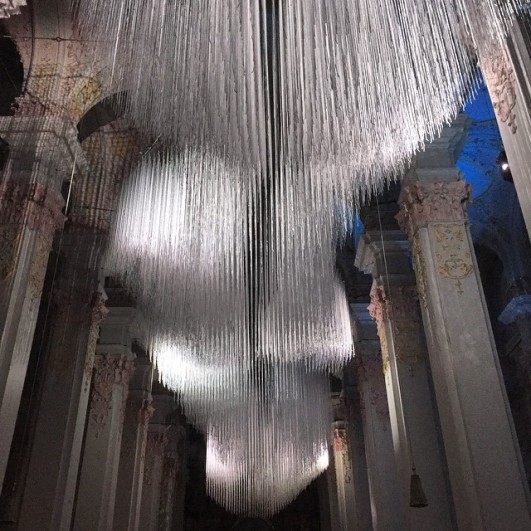 What a perfect German day!